The attorney general defended warrantless spying with yet more doublespeak, but the Senate is homing in on Bush's dangerous abuse of power. 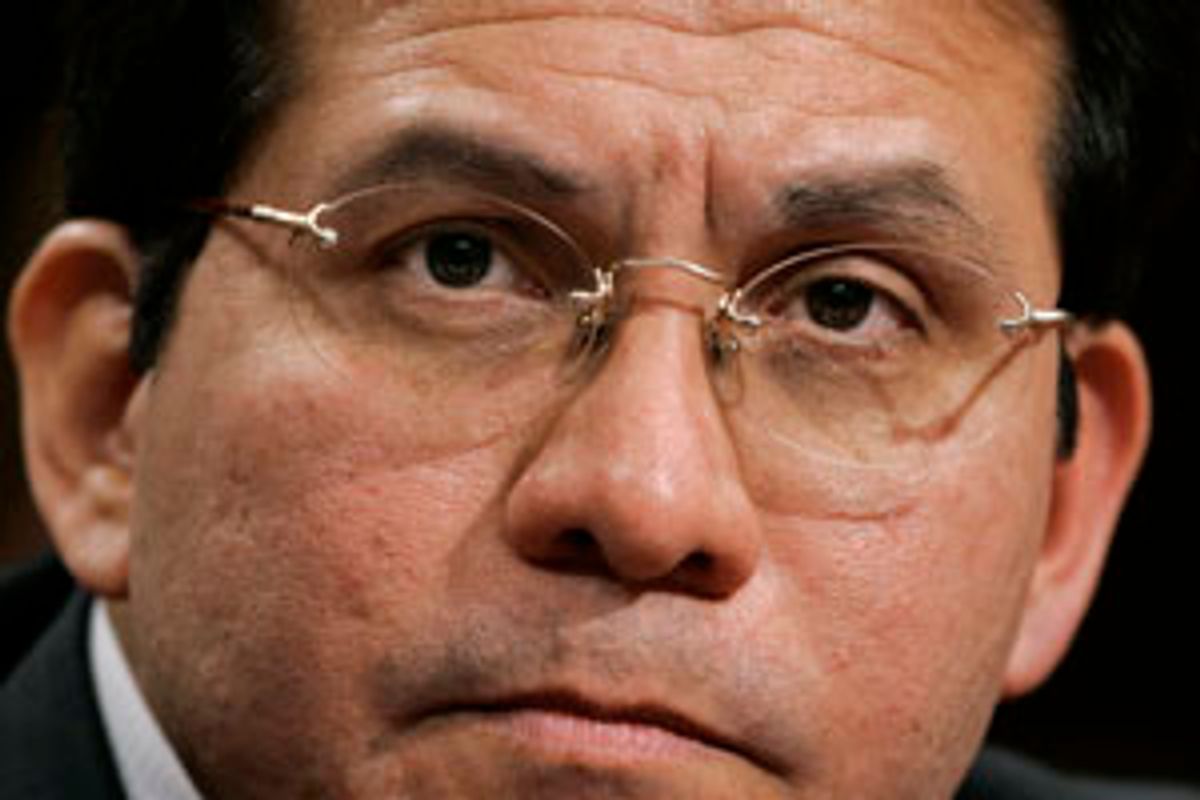 Attorney General Alberto Gonzales takes questions by the Senate Judiciary Committee on whether President Bush, and others in the executive branch, acted illegally in permitting domestic surveillance by the National Security Agency, on Capitol Hill in Washington, Monday, Feb. 6, 2006. He insisted that President Bush is fully empowered to eavesdrop on Americans without warrants as part of the war on terror and he cautioned Congress not to end or tinker with the program. (AP Photo/J. Scott Applewhite) (J. Scott Applewhite)
--

U.S. Attorney General Alberto Gonzales began his prepared remarks to the Senate Judiciary Committee on Monday by invoking "al-Qaida and its affiliates" and ended with the phrase "war on terror." His heavy-handed word choice reflected the decision of the White House to turn the first congressional hearing on the NSA eavesdropping scandal into a referendum on whether Americans want to grant Osama bin Laden the same freedom-to-phone rights as your typical patriotic telemarketer. But surprisingly, this once powerful terror talk did not quiet congressional qualms about the Bush administration's determination to rewrite the Constitution without a license.

Part of the difference was that committee Democrats, chastened by their garrulous ineptitude during the Samuel Alito confirmation hearings, remembered to question the witness. Gonzales also lacked the glib charm of John Roberts and the safe "I've spent my life in the law library" cipher quality of Alito. But what mattered during the all-day hearing was that, from time to time, committee Republicans -- particularly chairman Arlen Specter of Pennsylvania and South Carolina's Lindsay Graham -- bore in mind that they, too, were upholding the powers of the Congress rather than unquestioningly defending the Bush White House.

The Gonzales hearing was not a vote-counting exercise like a Supreme Court nomination fight or a legislative battle. Instead, it should be regarded as a barometer reading about whether the extralegal wiretapping of international calls will escalate into a major confrontation between the president and Congress, or whether it will fade from the headlines like the torturing of Iraqi prisoners at Abu Ghraib. That's why what mattered Monday were less the Democratic sound bites than the sullen rumbles from committee Republicans. As Graham pointedly told Gonzales, "When the nation's at war, I would argue, Mr. Attorney General, you need checks and balances more than ever, because within the law we put a whole group of people in jail who just looked like the enemy."

In political terms, the current squall over NSA eavesdropping will become merely a light mist if the matter gets caught up in an arcane legal argument over the 1978 Foreign Intelligence Surveillance Act (FISA), which set up special courts for the government to easily obtain warrants in national-security wiretapping cases. But there are two ways for "Big Brother is listening" to become a major election-year issue: Either it becomes a metaphor for George W. Bush's disregard for the rule of law, or else new revelations show that the government has been targeting vacation phone calls from Aunt Tillie as well as chatter from Abdul the terrorist.

The attorney general will probably be the only administration witness who testifies in open session about the secret program of wiretapping without a warrant. While the Senate Intelligence Committee is also becoming belatedly curious about which phone calls the hush-hush National Security Agency has been monitoring, that committee's hearing Thursday will be button-your-lips, closed-door classified. So Gonzales, who was White House counsel during the president's first term, has become the public face of warrantless wiretapping. The attorney general may have been infuriating in his parched definition of the questions that he could answer ("I'm not here to discuss the operational details of the program or any other classified activity"), but at least he admitted being present at the creation of the doctrine that Congress cannot bind the president's war-making powers.

Committee Democrats proved adept at cornering Gonzales over whether the president's claimed wartime powers would allow the government to monitor without a warrant domestic phone calls between two Americans. Rather than acknowledge limits on executive power, the attorney general instead tried to dismiss the idea in public-relations terms. "If the president had authorized domestic surveillance, as well ... I think the reaction would have been twice as great," Gonzales said. "And so there was a judgment made that this was the appropriate line to draw in ensuring the security of our country and the protection of the privacy interests of Americans." In essence, the attorney general was asking the nation's citizens to trust the built-in sense of restraint that animates Bush and Dick Cheney.

Pat Leahy of Vermont, the committee's senior Democrat, slowly coaxed out of Gonzales a timeline about when the administration decided that it was not obligated to get warrants under the 1978 FISA law to wiretap American citizens talking to someone abroad. The attorney general admitted that this expansive legal theory was created between the time that Congress rubber-stamped a go-to-war-in-Afghanistan resolution just a few days after Sept. 11 and when it approved the Patriot Act a month later.

What is important about this timing is that the administration never hinted at the NSA's bend-the-law eavesdropping policy when it was simultaneously demanding liberalization of the FISA warrant rules under the Patriot Act. So Congress after 9/11 gave the president's team all the new legal powers they requested just days after Bush & Co. unilaterally and secretly decreed that the president's war-making powers trumped the awkward necessity of following the FISA law.

But Leahy's best gotcha moment came when he got the attorney general to explain exactly when the administration decided that going to Congress at all was not worth the trouble. At a mid-December 2005 press conference -- just after the New York Times revealed the existence of the NSA snooping program -- Gonzales pointed to the political problems of working with Congress as a major reason why the government had to resort to warrantless wiretapping. But at Monday's hearing, Gonzales reversed field and admitted that these discussions about legislative difficulties occurred in 2004 -- nearly three years after the NSA decided that it didn't need no stinkin' warrants to listen to an American citizen's phone calls.

There was one chilling moment at the hearing that had nothing directly to do with NSA's wiretapping program, but conjured up the potential for the Bill of Rights to be trampled under the administration's sweeping assertion of wartime power. Texas Republican John Cornyn asked Gonzales about the possibility of prosecuting the New York Times under the espionage laws for publishing the NSA eavesdropping story. Of course, the proper answer to Cornyn's question should have been, "Senator, with all due respect, are you out of your mind?"

Instead, Gonzales fanned the flames of the anti-liberal-media revenge fantasies of the right-wing blogosphere when he replied, "Obviously, our prosecutors are going to look to see all the laws that have been violated. And if the evidence is there, they're going to prosecute those violations." Cornyn, who probably is not going to be a guest of the Times at the White House Correspondents Dinner, pressed onward, looking for a First Amendment escape clause. His follow-up question about the newspaper gave Gonzales a second chance to silence the speculation, but instead the attorney general said ominously, "Senator, I'm sure the New York Times has their own great set of lawyers, and I would hate in this public forum to provide them my views as to what would be a legitimate defense."

Since Gonzales' mandate was limited to legal theory, his testimony did little to unravel the central mystery of the NSA wiretapping story: Why was the government so determined to operate outside the law -- if all it has been doing, as it claims, is monitoring al-Qaida phone calls?

California Democrat Dianne Feinstein speculated aloud to Gonzales that the only way that this makes sense would be "if the program was much broader and you believed it would not be authorized [by Congress]." While her theory sounds plausible, there is no hard evidence to support it. And that is the problem: Unless new verifiable details about the NSA spying program emerge soon, we may be limited to debating legal theories. And in the show business of contemporary politics, arguments over legal theories are what close on Saturday night.