"The Last of Her Kind"

Sigrid Nunez's story of the friendship between two Barnard women in the 1970s is a truly great American novel. 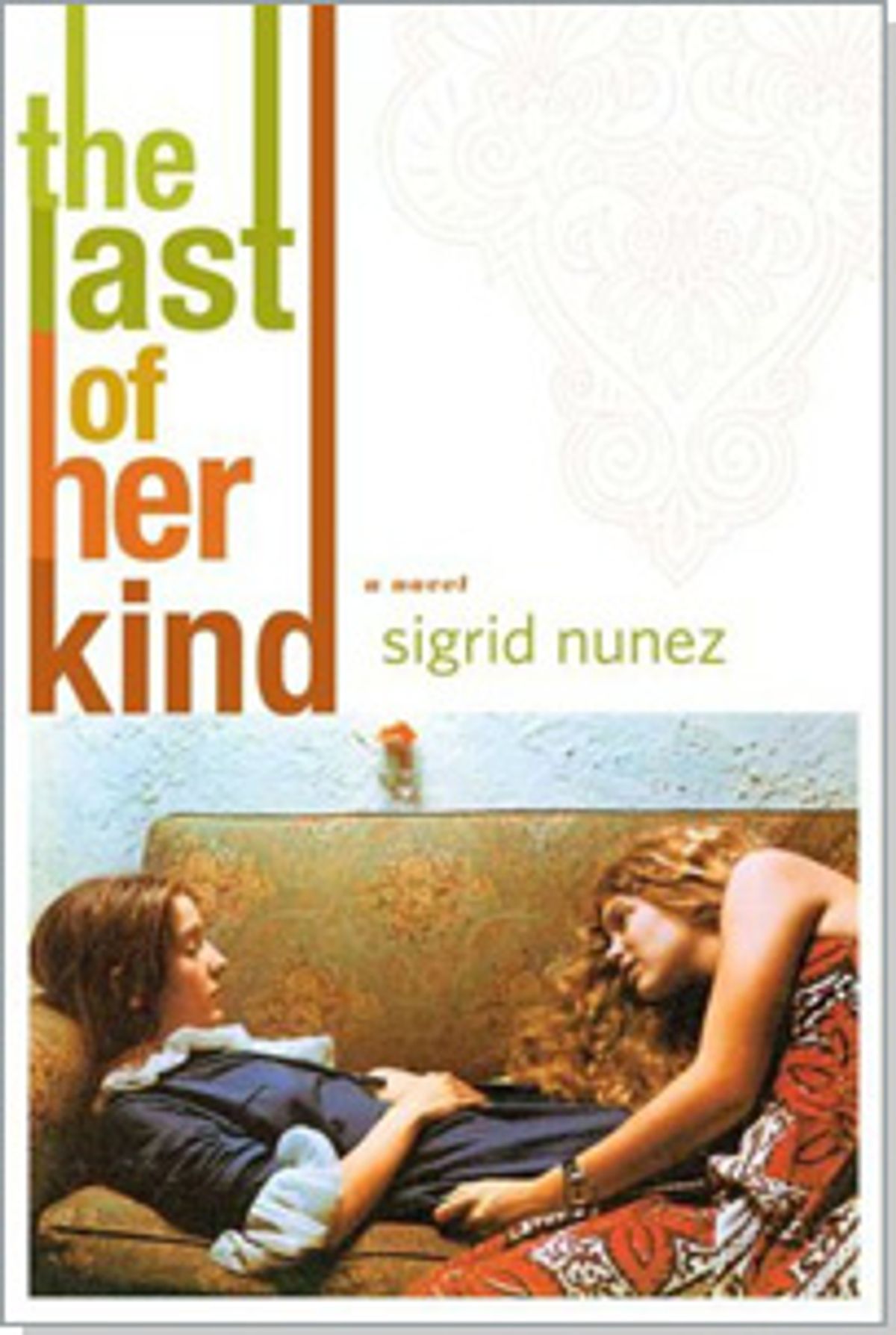 When Georgette George, the narrator of "The Last of Her Kind," meets the man who will become the great tragic love of her life outside a bookstore on St. Mark's Place in Manhattan's East Village -- and her choice, a man who has already played a minor role in her story, will seem both inevitable and surprising -- the book they're both admiring is an old Modern Library edition of Proust. (She later goes back to buy it for him, but it's gone. Of course he has bought it for her.)

Few novels, and few novelists, can get away with such an invidious comparison. The minute you introduce the most famous work in the modernist pantheon as a prop in your own book, you've thrown down the gauntlet before your readers: Would they rather be reading Proust, or the book they hold in their hands? As if to let us know she's playing with the big boys, Sigrid Nunez doesn't stop there. We also learn that some years before taking that lover, Georgette got an A for a college term paper, fueled by overconfidence and amphetamines, titled "Why 'The Great Gatsby' Is Not a Great Book." At the very end of "The Last of Her Kind," Georgette's daughter Zoe, herself now in college, fishes it out and reads it.

I don't agree with Nunez about "Gatsby" -- or at least I don't agree with Georgette, which may or may not be the same thing. In fairness, neither does Zoe, who notes, "But, Mom, you were high when you wrote this." A writer of Nunez's piercing intelligence and post-feminist consciousness may well feel that writing the Great American Novel is no longer a feasible or worthwhile goal -- but damned if she hasn't gone and done it anyway. OK, let's call "The Last of Her Kind" a great American novel, but however you want to define it, it's a bravura performance.

What begins as an enjoyable comedy of manners about the overly intense friendship between two Barnard College freshmen in 1970 -- part Mary McCarthy, part Joan Didion -- gradually adds sinew, steam and texture. Building in scope and excitement as it goes, it blossoms into a powerful and acute social novel, perhaps the finest yet written about that peculiar generation of young Americans who believed their destiny was to shape history. Georgette arrives at Barnard from a dead-end working-class town in upstate New York, leaving behind her sickly, abusive mother, a nest of unhappy siblings and a slow-witted neighbor who hangs kittens from the Christmas tree. (I don't know much about Nunez's personal background, but she is refreshingly devoid of bourgeois sentimentality about the poor.)

Georgette's new roommate might as well be from a different galaxy. Ann Drayton (she has dropped her original über-WASP given name, Dooley) arrives from Connecticut with packing crates full of fashionable clothes, which she promptly gives away. She addresses her parents as "Sophie" and "Turner," and reviles them at every opportunity for their money, their class privilege, their perceived bigotry, their ineradicable whiteness. Of course she becomes a leader of the student antiwar movement, and has her picture taken for a newsmagazine, sitting in their dorm room smoking a cigarette between posters of Ho Chi Minh and Malcolm X. Beneath the picture a quotation: "What we want is for America finally to face up to its crimes."

All the conclusions we are likely to draw about an insufferable person like Ann, from the safe distance of the 21st century, are both true and wholly inadequate. Is she an egotist and a zealot? A poor little rich girl getting back at her inattentive, overprivileged parents by attacking what they seem to represent? Perhaps so. But as the story progresses, Nunez does not allow us, or Georgette, to comfort ourselves by believing Ann to be insincere or shallow. She is explicitly compared to Joan of Arc and to St. Teresa of Avila (once described as "the last of her kind"). Her rebellious nature, whatever its origins, lies in her bones and marrow, at the center of her being.

After their first two years of college, Georgette and Ann drift apart; the former drops out and begins working at a women's magazine called Visage (pronounced, of course, in the French manner), while the latter moves ever closer to the wacko fringes of early-'70s radical activism. But neither of their stories is complete, and "The Last of Her Kind" is really just getting started. This was the decade, after all, that taught us the personal was political, and from these two women's intersecting lives Nunez weaves a tapestry that encompasses much of the disorienting lurch of American life in those years.

After a violent argument with Ann -- Georgette, who has been well coached by her older brother, punches her out -- Georgette assumes they'll never see each other again. She's wrong, of course. "I believe you have to reach a certain age," she muses in her narrative mode, "before you understand how much life really is like a novel, with patterns and leitmotifs and turning points, and guns that must go off and people who must return before the ending."

"The Last of Her Kind" certainly has all those things. The gun that must go off is in Ann's hands, in an episode that will make her notorious in 1976. Some readers may detect echoes of Kathy Boudin, the real-life Weather Underground radical, in Ann, while others may see traces of Patty Hearst. She is a distant cousin to both -- and both cases are mentioned here -- but she is, of all things, a fictional creation, not a piece of thinly veiled social history.

Meanwhile, Georgette has been busy with Solange, her flower-child runaway sister, who surfaces on her Manhattan doorstep like a drowned cat after three years. Solange is a damaged, unstable girl who goes in and out of institutions and writes hilarious, awful letters to Mick Jagger, but in her own way she becomes an anchor in Georgette's life. (And you really want Solange around, it turns out, on a night when the acid turns out to be way, way too strong.) Georgette marries twice -- the first time to a shrink she meets at Solange's psych ward -- and, as I've said, has a fateful love affair with someone truly surprising.

Nunez is pretty tough on all these people. Even Georgette has galling passive-aggressive tendencies she can never overcome. But if the novelist views her creations with a certain ironic distance, she also sees them in the fullness of context, so that nearly all of them become more rather than less sympathetic as we know them better. In the great tradition of female novelists from Austen to Atwood, Nunez is harder on her women than her men. It's true that Georgette suffers both a rape and a near-rape, but she is traumatized at least as much by her so-called friends: first by the radical women around her, who insist that for black men, raping white women is "revolutionary," and later by younger feminists who tell her gravely, many years later, that she has repressed her pain and still has "a lot of emotional work to do."

From Kwame, the African-American radical who wants to leave his revolutionary past behind and settle down with Ann, to Turner and Sophie, genuinely good-hearted parents who have tried to raise their daughter as they were taught to, Nunez's large cast comes to seem like all Americans, possibly deluded but hardly ever insincere. Nunez is an exceptionally subtle stylist who begins in the female-coded zone of nuance and emotion, so I can only hope that people will notice the scale of her achievement here. One might usefully contrast Christopher Sorrentino's "Trance," an able treatment of the Patty Hearst kidnapping in the collage style of Thomas Pynchon, which announces itself as a big social novel in capital letters but doesn't have half the insight or originality of "The Last of Her Kind."

It sometimes seems these days that in our quest for "reality" we have forgotten that the truth of art and literature must be found in the work itself. If we must rely on external reassurance that such-and-such a thing really happened, then the work in question is crap and we might as well be watching "Cops." At least it has pictures. I don't know whether Sigrid Nunez has ever been raped, or had her hand shoved down Mick Jagger's pants in the Altamont parking lot. (Jagger appears a couple of times as a minor supporting character, cheerful, goatish and entirely convincing.)

I also don't know whether she's personally had an acid trip that went way off the highway into the deep, dark forest, or has ever made a halfhearted suicide attempt, or was married to a brilliant but relentlessly negative critic who died in a car crash with a naked girl on his lap. I suspect she's been rather closer to these things than I have, because she makes me believe them as they happen to Georgette and others. But I'm only guessing and it doesn't matter.

Whether Nunez belongs on the shelf with Proust and Fitzgerald is not for me to say. But I'm not offended by her suggestion that she might; the rap against American female novelists is that they lack grand ambition, and you can't say that here. "The Last of Her Kind" is a masterly accomplishment, and one likely to be overlooked while the media and the publishing industry are preoccupied with badly written blowhard memoirs that turn out to be lies. This book is of course fiction, but it has more truth in it, more compassion, and more revelation, than all the confessional memoirs spewed up by all the self-aggrandizing idiots of the last decade. Don't miss it.