Words by Gonzales, logic by Kafka 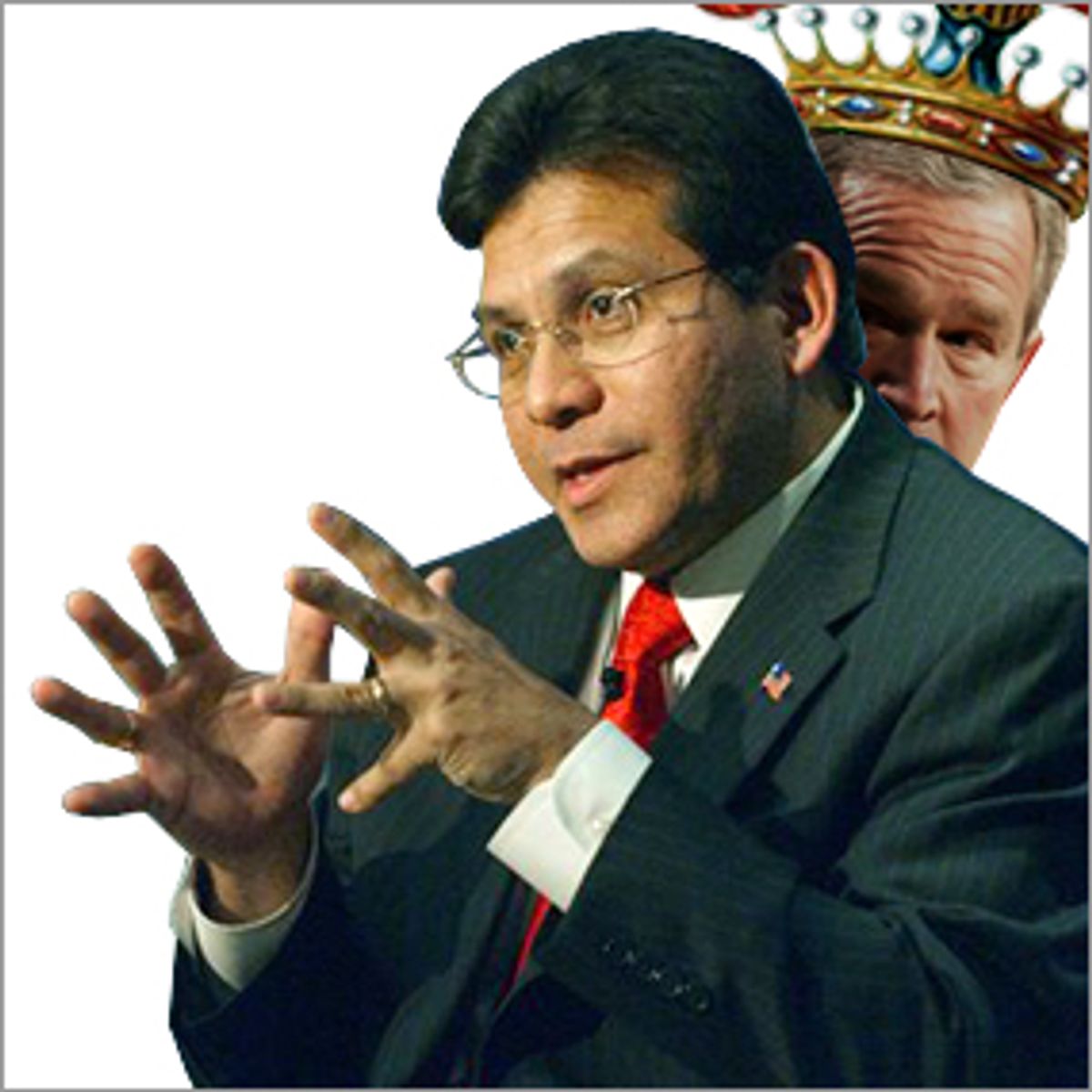 In 1996, Texas Gov. George W. Bush received a summons to serve on a jury, which would have required admission that 20 years earlier he had been arrested for drunken driving. Already planning his presidential campaign, he did not want this biographical information to be known to the public. His lawyer at the time made the novel argument to the judge that Bush should not have to serve because "he would not, as governor, be able to pardon the defendant in the future." (The defendant was a stripper accused of drunken driving.) The judge agreed, and it was not until the closing days of the 2000 campaign that Bush's record surfaced. On Monday, the same lawyer, Alberto Gonzales, now U.S. attorney general, appeared before the Senate Judiciary Committee to defend "the client," as he called the president.

Gonzales was the sole witness called to explain Bush's warrantless domestic spying in obvious violation of the Foreign Intelligence Surveillance Act and circumvention of the special court created to administer it. The scene at the Senate was acted as though scripted partly by Kafka, partly by Mel Brooks and partly by John le Carré. After not being sworn in, the absence of oath taking having been insisted upon by the Republicans, Gonzales offered legal reasoning even more imaginative than he had used to get Bush out of jury duty, a mélange of mendacity, absurdity and mystery.

The attorney general argued that the FISA law did and did not apply, that the administration was operating within it, while flouting it, and that it didn't matter. The president's "inherent" power, after all, allowed him to do whatever he wants. It was all, Gonzales said, "totally consistent." But his explanation, observed Sen. Arlen Specter, the Republican chairman of the Judiciary Committee, "defies logic and plain English."

Congress, Gonzales elaborated, had no proper constitutional role, but in any case had already approved the president's secret program by voting for the authorization for the use of military force in Afghanistan, even if members didn't know it or, when informed years later that they had done so, objected that they hadn't. The law that was ignored, Gonzales declared, shouldn't be amended to bring this domestic spying under the law because the secret program is already legal, or might be legal, and anyway it doesn't matter whether Congress says it's legal. The all-powerful president should be trusted, but when Bush states wrongly that he goes to court for warrants, it's all right that he doesn't know what he is talking about. "As you know," Gonzales said, "the president is not a lawyer."

Who was or wasn't being spied on couldn't and wouldn't be explained. When Sen. Dianne Feinstein, D-Calif., asked whether the program could be used to "influence United States political processes, public opinion, policies or media," Gonzales replied, "Those are very, very difficult questions, and for me to answer those questions sort of off the cuff, I think would not be responsible." When Sen. Joseph Biden, D-Del., asked for assurances that only al-Qaida or suspected terrorists are subject to surveillance, Gonzales answered, "Sir, I can't give you absolute assurance."

Gonzales' ultimate argument was an appeal to history. George Washington, he pointed out in a display of erudition, "intercepted British mail," footnoting a 1997 CIA report on the subject. In the Civil War, the telegraph was wiretapped. And during World War I and II, communications were intercepted, too. Gonzales' ahistoricism about technology aside (Washington had no cellphones to tap, no computers to hack), Washington, Lincoln and Roosevelt could not break a law that did not exist.

Through his convoluted testimony, Gonzales represented "the client" as a useful factotum again. But in his tour of history, he neglected the disclosure by the Associated Press on Feb. 3 of about 200 pages of documents from the White House of President Gerald Ford. These papers highlighted the objections of Ford's secretary of defense, Donald Rumsfeld, and chief of staff, Dick Cheney, to getting court warrants for domestic surveillance. It was partly to thwart such unaccountable executive power that Congress enacted the FISA in 1978.

Once again the power behind the throne, Cheney has found a way to relieve the frustrations of the past. But he is fulfilling more than the curdled dreams of the Ford and Nixon era. The Bush presidency is straining to realize a pre-Washington ideal -- unconstitutional monarchy.