As he spoke to the Heritage Foundation, you would never have guessed that mild-mannered John Yoo paved the legal road to torture. 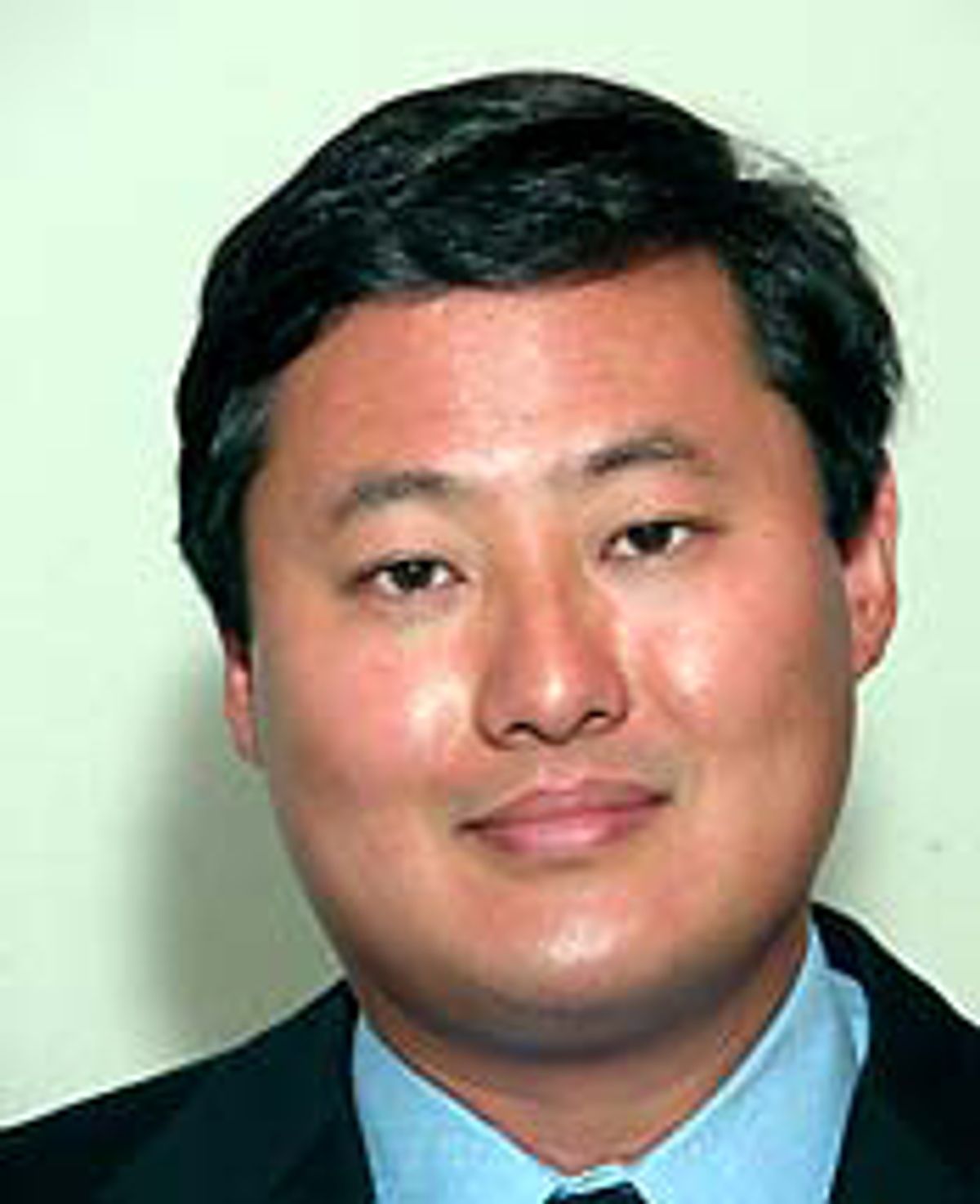 John Yoo was in a jaunty mood.

The former Bush deputy assistant attorney general, now a law professor at the University of California, Berkeley, returned to Washington Wednesday to rhapsodize about his theory of an all-powerful wartime presidency. Yoo clearly felt on safe territory at the Heritage Foundation, a conservative refuge where he was unlikely to face too many intemperate questions about his 2002 Justice Department memos arguing for a narrow eye-of-the-needle legal definition of torture when questioning al-Qaida captives.

Relaxed and smiling during his 30-minute speech and the question-and-answer session that followed, Yoo revealed his lighter side with a series of faculty-lounge laugh lines. He announced that his presence at Berkeley was part of a conservative plot "to balance out Chief Justice Earl Warren," a graduate of the law school. He joked about nervously following the Amazon.com ranking of his 2005 book, "The Powers of War and Peace: The Constitution and Foreign Affairs after 9/11." And cheerfully alluding to his own hot-potato reputation because of the torture memos, Yoo said, "Congress has the power to confirm appointments and prevent people from taking office with whom it disagrees. I would probably fall under that category these days."

In his talk, Yoo played semantic legal games to argue that when the Constitution unequivocally states that Congress has the power "to declare war," it somehow does not mean that the legislative branch can "begin a war" or, presumably, end one. Prodded by a sympathetic Heritage fellow, Yoo even gleefully danced around a how-many-angels-on-the-head-of-a-pin question about whether Congress has the power to forbid the Pentagon to spend any money to launch cruise missiles during wartime.

Watching this over-intellectualized performance by Yoo, I kept harking back to the legal opinions that he wrote asserting anything-goes standards for questioning war-on-terror prisoners. This affable man sat in an office in the Justice Department and typed sentences like this to define torture: "Where the pain is physical, it must be of an intensity akin to what which accompanies serious physical injury such as death or organ failure." (That quotation is taken from an Aug. 1, 2002, memo largely drafted by Yoo, but signed by his boss, Jay Bybee, then the assistant attorney general.)

What was Yoo thinking as he wrote those words? Was this just an abstract legal game for him, an intellectual exercise that he pretended would have no real-world consequences? Another theory is that Yoo gave way to amoral careerism -- this was the way that Dick Cheney and Don Rumsfeld wanted al-Qaida captives to be questioned and it was up to the Justice Department to concoct a fig-leaf legal rationalization. Or maybe, just maybe, in the panicked aftermath of Sept. 11, Yoo was personally convinced that virtually any style of coercive questioning would be justified if it might deter another terrorist attack.

So I asked Yoo whether before he wrote his 2002 memos, he had been briefed about the effectiveness of the "aggressive interrogation techniques" that he flatly stated are legal despite federal laws and international treaties forbidding torture. (I will ruefully confess to a bit of linguistic apple polishing in using the phrase "aggressive interrogation techniques" in my question.)

"That's a very good question," Yoo replied, "but I'm afraid that I don't think I can answer it. I can describe what we thought we were doing in the memo itself, but I'm not at liberty to say exactly how these questions arose." Yes, it is tempting to parse Yoo's phrasing and analyze his body language in an effort to decode his answer. My guess from watching him is that these legal opinions were prompted by something far more overt than a simple query from then-White House counsel Alberto Gonzales.

Even though I did not specifically refer to the Bybee memo in my question, it seemed clear that this was the document that Yoo was referring to in his answer. The former Bush official tried to distance himself from any pain that had been inflicted on actual captives as a result of this legal opinion. "I will point out, that memo by its own terms is not written about any particular interrogation method," Yoo said. "The memo in its own terms is about not committing criminal acts."

Yeah, sure. The Bybee memo states, "Because the acts inflicting torture are extreme, there are a significant range of acts that though they might constitute cruel, inhuman or degrading treatment or punishment fail to rise to the level of torture." By declaring virtually any conduct this side of ripping out a prisoner's liver to be something other than torture, Yoo and his colleagues at the Justice Department did not have to write a specific interrogation rule book. Their message was clear: If the prisoner is alive at the end of the day, it is legal.

At the end of his talk, Yoo had to exit through a small knot of over-excited followers of lunatic-fringe theorist Lyndon Larouche. Even when provoked by some of their offbeat conspiracy-theory questions, he was patient and polite. That is the enigma of John Yoo: How can such a seemingly nice guy be so unaffected by having been the legal enabler of what normal Americans would call torture?