Once more unto the breach

Bush's latest visit to New Orleans was a hollow pose, bringing nothing that will actually help rebuild the ruined city. 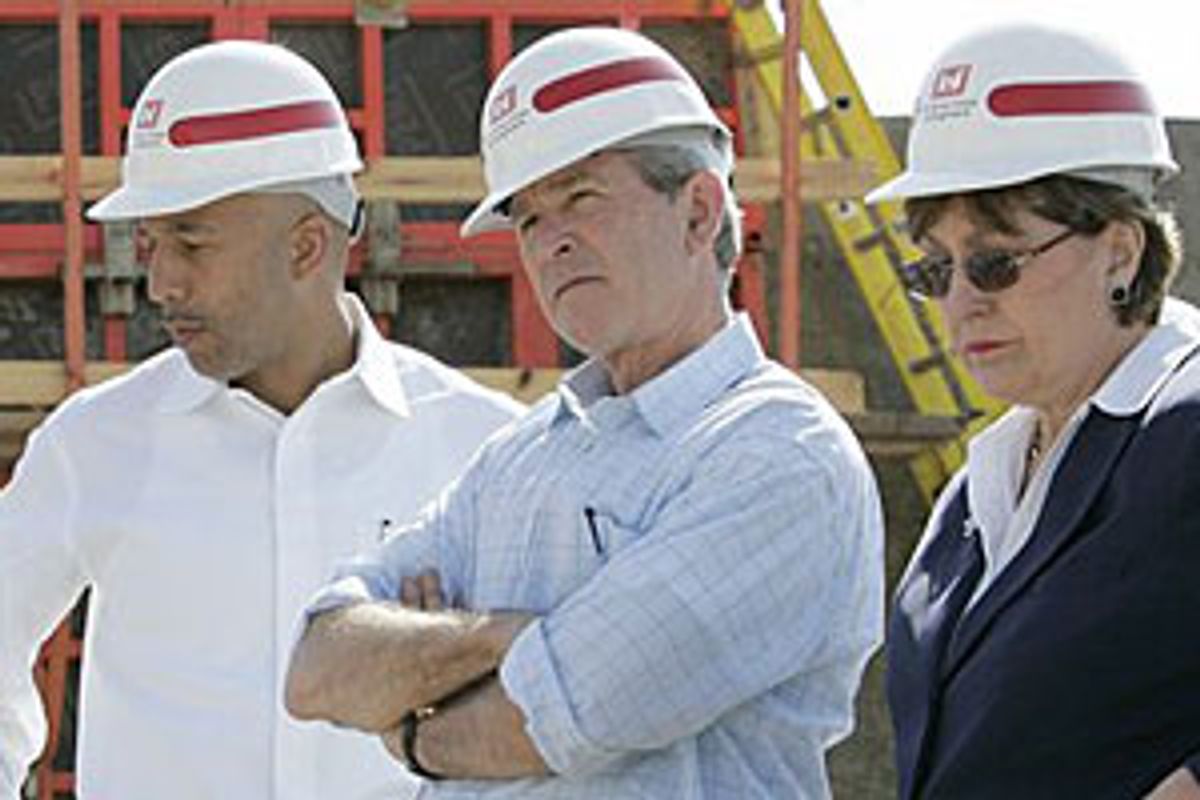 On the eve of George W. Bush's presidential campaign in 2000, the neoconservative Kenneth Adelman cast him as a Prince Hal who "puts the indiscretions of his youth behind him" and "redeem[s] his father's reign." After Sept. 11, 2001, Bush was wreathed with regal laurels as Henry V by a clerisy of pundits. None of the celebrants cited, from "Henry IV, Part 2," the advice the dying king imparts to his son: "Be it thy course to busy giddy minds/With foreign quarrels; that action, hence borne out,/May waste the memory of the former days." (Adelman, appointed by President Bush to the Defense Policy Board, declared in anticipation of the Iraq war that it would be a "cakewalk.") From ground zero to the deck of the USS Abraham Lincoln ("Mission Accomplished") the president struck bold poses, but his choreographed gestures have especially illuminated his hollow crown in the darkened breach of New Orleans.

Last week, for the first time, the public saw the spontaneous Bush behind closed doors, in a leaked videotape that recorded one of his briefings the day before Hurricane Katrina struck. Bush in cinéma vérité does not resemble Bush in tableau vivant. Teleconferenced in from his Crawford, Texas, compound on Aug. 28, Bush listens to disaster officials inform him that the storm will be unprecedented in its severity and consequences. "This is, to put it mildly, the big one," says Michael Brown, then director of the Federal Emergency Management Agency. Max Mayfield, director of the National Hurricane Center, warns, "This hurricane is much larger than Hurricane Andrew ever was." Bush asks not a single question, says, "We are fully prepared," and departs.

This Katrina videotape is as defining for Bush's presidency as the audiotapes of President Kennedy's councils of state during the Cuban missile crisis were for his. Kennedy's tapes revealed him as probing, subtle, prudent and decisive. Bush's tape exposes a deaf man spouting talking points. After the hurricane hit, he stayed on vacation, went to a birthday party, strummed a guitar with a country-western singer and, on Sept. 1, said, "I don't think anybody anticipated the breach of the levees." On his flight back to Washington four days after Katrina's landfall, his aides gave him a DVD of television news reports of the hurricane's impact, about which he had done nothing to learn on his own.

As the catastrophe of the foreshadowed aftermath unfolded, he clapped FEMA's Brown on the back: "Brownie, you're doing a heck of a job." But soon the administration settled on Brownie as the scapegoat, prevented him from defending himself and forced him to resign. Like a good liegeman, he was expected to fall on his sword.

Suddenly, last week, the sacrificial Brown stormed back onto the stage, the betrayed turning on his betrayers. He proclaimed on every media outlet that he would no longer play the fall guy, detailed the warnings he had given, named malefactors running up the chain of command and demanded the resignation of Secretary of Homeland Security Michael Chertoff. Brown even pointed out that Bush was the only person ever to call him "Brownie." Rejecting the honorific belittlement, he exchanged vassalage for vengeance.

In New Orleans, a sad Mardi Gras has come and gone, while crews from the morgues continue searching house to house for bodies, still finding them. The city has lost more than half of its residents; most of the refugees are African-Americans, and their old neighborhoods remain scenes of devastation. Having rejected a plan for rebuilding offered by Republican Louisiana Rep. Richard Baker, Bush traveled to New Orleans for another photo opportunity this week to announce a program that would supposedly give money to the homeless but would absurdly place restrictions that would make it impossible to rebuild homes. Not one federal penny so far has been spent on new housing. Six months after the tempest, New Orleans, one of the glories of American life and culture, lies in ruins, and Bush visits to pose as visionary.

In a recently published hagiography on the theme of Bush as Prince Hal, "Rebel-in-Chief: How George W. Bush Is Redefining the Conservative Movement and Transforming America," written by right-wing pundit Fred Barnes, Bush explained to him that his job is to "stay out of minutiae, keep the big picture in mind." To illustrate his self-conception, Barnes writes, Bush "called my attention to the rug" in the Oval Office. Bush said that he wanted the rug to express that an "optimistic person comes here." He delegated the task to his wife, Laura, who designed a rug featuring bright yellow rays of the sun. In his Oval Office, Prince Hal imagines himself grown into a Sun King.