Preening presidential hopefuls gather in a very early test of the best man to defeat the dreaded Hillary Clinton in 2008. 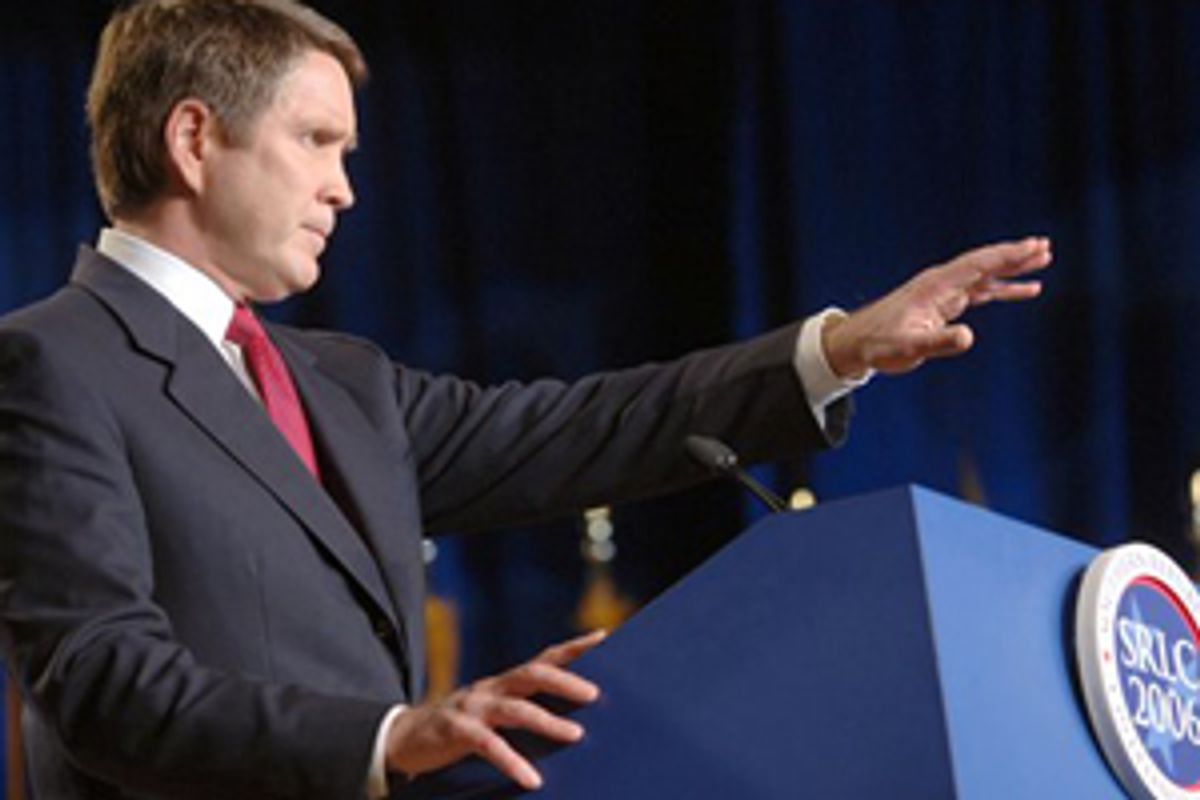 Walking into the lobby of the Peabody Hotel last Friday afternoon was akin to taking a time-warp trip back to an old-style Republican convention where politicos plotted behind potted palms, reporters swapped rumors and delegates demonstrated devotion to differing candidates with decorations and lapel pins.

Fans of Massachusetts Gov. Mitt Romney, an all-but-certain 2008 presidential contender, wore buttons that simply stated his last name as if no further explanation were needed. Supporters of hometown hero Bill Frist wore decals that read, "Frist Is My Leader," which made these Tennesseans seem like members of a cult that discouraged free will. When Bob Dole was Senate majority leader, the job that Frist currently holds, he merely called his dog "Leader."

Politics is that rare American industry that does not have to worry about foreign competition or the outsourcing of vital jobs like press handler and briefcase fetcher to India. The robust health of this pivotal economic sector was on display at the Peabody over the weekend, where roughly 2,000 Republicans assembled to witness a headline-making product launch -- the fresh-from-the-factory rollout of the 2008 presidential race.

Officially the event was billed as the Southern Republican Leadership Conference, but that bland name did not provide much camouflage. With six putative White House contenders preening before the delegates (who paid between $150 and $225 for the honor) and national political reporters (who really ought to get a life), this was presidential politics at its finest and earliest.

Arkansas Gov. Mike Huckabee, who wants to be the second American president to hail from a place called Hope, cut through the flimsy we're-only-trying-to-hold-Congress-in-November cover story when he jokingly told the delegates Saturday afternoon, "I'm supposed to be able to convince you that not a single person on this program has any interest beyond the 2006 elections ... [and] nobody at all is thinking about 2008."

Even Frist, who is a master at robotic denials of the obvious, could not keep up the pretense that he was disinterested in the results of a presidential-preference straw poll sponsored by the Hotline, the online political newsletter. During a question-and-answer session with reporters that lasted almost four whole minutes, Frist admitted, "This is my home state. Of course, you want to do well."

It is easy to understand why Democrats can't stop thinking about tomorrow, since today in politics is bleak. Far more mystifying is why the GOP seems so eager to click through to the 2008 campaign even though George W. Bush's White House lease has nearly three more years to run. Part of the explanation may be that politicking is far more fun than governing. And with no obvious political heir to Bush, ambitious Republicans are behaving like avaricious relatives scheming to be prominently mentioned in the family patriarch's will.

South Carolina Sen. Lindsey Graham -- a leading John McCain supporter in 2000 who remains close to the Arizona senator -- partly attributed the too-much-too-soon start of the presidential race to cable television and its unending appetite for political talk. (MSNBC's Chris Matthews seemed to be trying to replicate a Jerry Lewis telethon in the lobby of the Peabody with nonstop installments of "Hardball.")

As Graham said in an interview, "Those interested in being president in '08 have to react to the media discussions about who will be running for president in '08. You can't afford to sit on the sidelines when other people are beginning to sign up political operatives and donors. The constant talk about who will be the nominee forces everybody into the game because they think the next guy is getting an advantage while they're sitting on the sidelines."

Yet there is another major factor lurking out there, stressed by New Hampshire's Tom Rath, a well-connected member of the Republican National Committee, who spent a day in Memphis reveling in the political scene. And that is the Republican fear and loathing of Hillary Clinton in the White House. The New York senator inspires a level of demonology so intense that you could probably have gotten the GOP delegates in Memphis to believe that she wants to model her presidency after the regime of Pol Pot.

This brings us to the Hillary Paradox. Almost all the doubts that I hear about her political prospects come from downcast Democrats, who are convinced that she will romp to the 2008 nomination and then prove unelectable in November. Republicans, in contrast, seem almost fatalistic in their conviction that she would be a formidable foe, which is why they are so eager to find a champion who could unite the GOP in holy war to smite the Clintonian infidels. Never in modern political history can I recall a time when both parties were equally petrified that the same person (Hillary Clinton) might win a presidential nomination.

McCain is the face card in the Republican deck. His only potential rival for that honor, Rudy Giuliani, did not deign to come to Memphis. While Giuliani polls well, the former New York mayor will have a swell time explaining to social conservatives why he moved in with a gay couple when his then wife kicked him out of Gracie Mansion for philandering. But McCain offers the Republican Party the political version of that classic hold-up question: "Your money or your life?" The Arizona maverick voted against most of the Bush tax cuts on the grounds that they were unaffordable, but still embodies the best chance that a GOP president can continue to live in the White House.

As McCain demonstrated with his up-with-the-president speech in Memphis, his relationship with Bush is taking on a level of devious complexity unmatched since the mid-1960s jousting between Lyndon Johnson and Bobby Kennedy. The hawkish McCain told the delegates unequivocally about Iraq, "We must stay this course." That declaration did not inspire a single hand clap from the Republicans, who throughout the weekend wildly cheered all references to American soldiers, but seemed emotionally detached from the war itself. McCain also went out of his way to bring up his support for the already scuttled Dubai ports deal in an almost perverse effort to demonstrate his loyalty to Bush on an issue over which virtually every other Republican jumped ship.

Even trickier was McCain's gambit to avoid losing the straw poll to Frist, whose own presidential ambitions could not survive a Peabody putdown. Friday afternoon, hours before the Arizona senator's evening speech, his political strategist, John Weaver, made sure that everyone in the press knew that McCain would urge the delegates to write in Bush's name in the straw poll, supposedly in honor of the president's remaining three years in office. Of course, this too-clever-by-a-half scheme also set up Bush for Republican rejection at a time when the president's still-enthusiastic supporters could all fit into Karl Rove's office.

Weaver's wiles seemed more suited to an underdog candidate like McCain in 2000 than to an early favorite like McCain in 2006. Not only was the gimmickry obvious, but it didn't work, since McCain and the Bush write-in combined garnered fewer than one-sixth of the votes in the straw poll. As much as I disdain straw polls for having little predictive value, it was fun watching the overwhelmingly white delegates vote after having paid the equivalent of a hefty poll tax in the form of the registration fee. And the conventions of journalism require reporting that, yes, Frist was first when the ballots were counted.

But the real winner in Memphis was not Frist, who gave a speech of such jaw-dropping banality that the mere act of quoting it would induce a Snow White-like slumber. Nor was it Romney, who finished a surprise second, due in part to the efforts of a volunteer network of Tennessee evangelicals who distributed buttons and T-shirts with Halloween-style black lettering that read: "The left's worst nightmare -- the religious right for Romney."

No, the real winners in Memphis were the political reporters (sick puppies like me) and campaign operatives who once again -- earlier than ever -- are getting to frolic in a bewitching and bewildering theme park known as "Campaign Land."