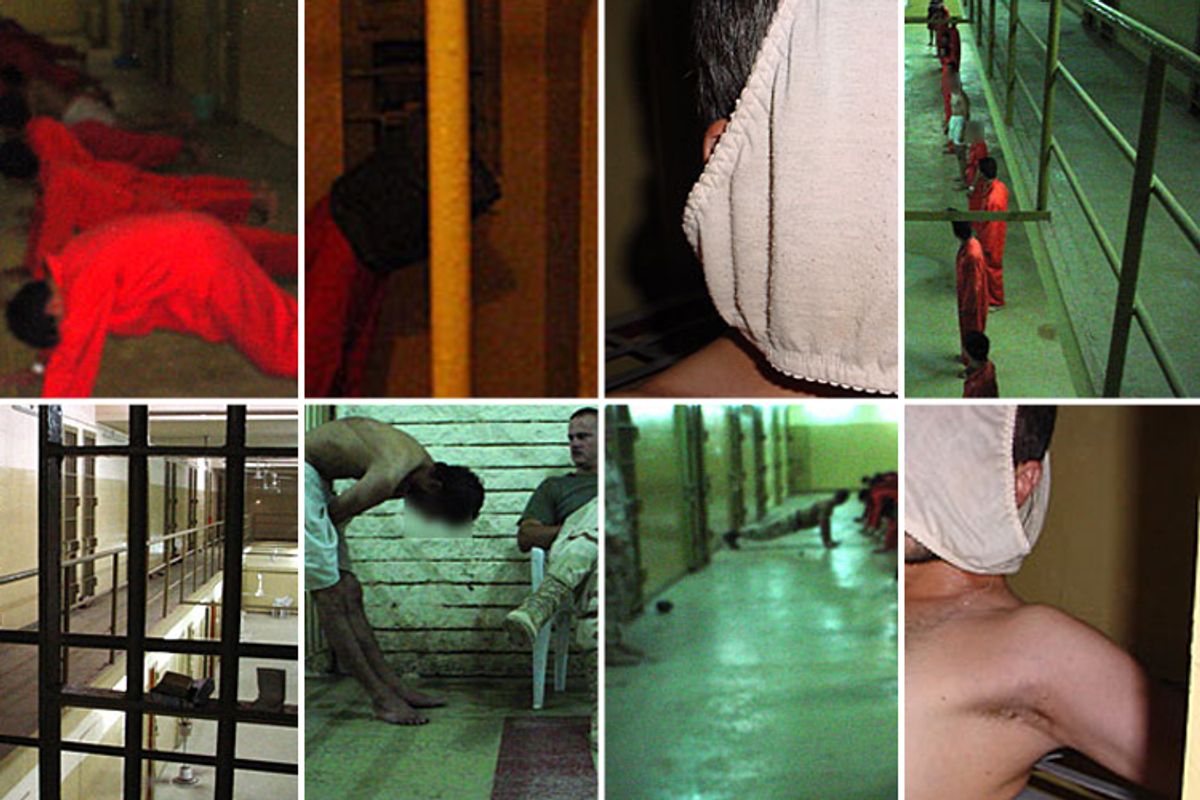 These photos were taken using cameras owned by Cpl. Charles A. Graner Jr. and Staff Sgt. Ivan Frederick II. Most of the photos depict detainees shackled naked in stress positions with women's underwear or hoods on their heads. In addition to the detainees, the pictures show Graner, Frederick, Spc. Megan Ambuhl, civilian contractor Adel Nakhla and a soldier the Criminal Investigation Command (CID) identifies as Sgt. Cathcart.

In the fall of 2003, the military police at Abu Ghraib systematically abused detainees using interrogation techniques similar to those once approved by Secretary of Defense Donald Rumsfeld -- forced nudity, stress positions, hooding and sleep deprivation, to name a few. Rumsfeld had approved harsh interrogation methods on Dec. 2, 2002, in a then classified memo for interrogators at Guantánamo Bay, Cuba. The memo was leaked to the media and eventually released by the White House in June 2004, sparking heated debate, domestically and internationally, about whether these tougher U.S. interrogation policies amounted to approval of torture and violation of international law.

In the year following Rumsfeld's memo, the Bush administration's legal framework for employing these interrogation techniques, and the approved techniques themselves, changed multiple times. The techniques Rumsfeld approved ostensibly were intended for use only on suspected terrorists and so-called unlawful enemy combatants, with trained interrogators receiving case-by-case approval. Instead, they spread widely through the military's interrogation operations in Afghanistan and Iraq, and spiraled out of control, Army documents show. After the overthrow of Saddam Hussein in April 2003, U.S. soldiers and intelligence personnel began to use these techniques in Iraq, where they were informally "accepted as SOP [standard operating procedure] by newly arrived interrogators," according to an August 2004 report on Abu Ghraib abuses by Maj. Gen. George R. Fay. By September 2003, Gen. Geoffrey Miller had arrived at Abu Ghraib, allegedly with a mandate to "Gitmo-ize" interrogation procedures at the prison.

The official guidance for proper interrogation techniques in Iraq became confused, even contradictory. "By mid-October, interrogation policy in Iraq had changed three times in less than 30 days," explained Fay. An Army investigation by Lt. Gen. Anthony R. Jones found that the military command in Iraq, led by Lt. Gen. Ricardo Sanchez, failed to provide proper oversight of interrogators at Abu Ghraib, contributing to the abuse. Some soldiers involved were inadequately trained in interrogation, investigators found.

These failures set the stage for many of the abuses apparent in these photographs. Military intelligence officers and civilian contractors began ordering military police to "set the conditions" for interrogations, Army investigators found. "This is not doctrinally sound due to the different missions and agendas assigned to each of these respective specialties," Maj. Gen. Antonio M. Taguba said in his March 2004 report.

"It is clear that pressure for additional intelligence and the more aggressive methods sanctioned by the Secretary of Defense memorandum resulted in stronger interrogation techniques. They did contribute to a belief that stronger interrogation methods were needed and appropriate," concluded a Defense Department review of detainee operations, led by former Defense Secretary James Schlesinger and released in August 2004. "We cannot be sure how much the number and severity of abuses would have been curtailed had there been early and consistent guidance from higher levels. Nonetheless, such guidance was needed and likely would have had a limiting effect."

The abuses at Abu Ghraib that were photographed on Oct. 18 and 19, along with detainee testimony, show the visceral effects of the interrogation tactics once sanctioned for detainees at Guantánamo by Rumsfeld. Many of the photos depict a single detainee shackled naked to a bed with underwear on his head. A July 1, 2004, report on Abu Ghraib by the Army's CID said this man was "possibly" a detainee named H-----. Graner, however, whose camera was used to take most of these photos, told CID investigators on April 6, 2005, that these pictures showed another detainee named W-----, whom Graner called "Taxi Driver." Graner said he was ordered by a civilian interrogator working at Abu Ghraib to strip, shackle and hood the detainee as part of a sleep deprivation program.

Regardless of which detainee these pictures show, both H----- and W----- told eerily similar tales to Army investigators. "They stripped me of all my clothes, even my underwear," H----- told CID investigators on Jan. 18, 2004. "They gave me woman's underwear that was rose color with flowers in it, and they put the bag over my face. One of them whispered in my ear, 'Today I am going to fuck you,' and he said this in Arabic."

"I faced more harsh punishment from Grainer [sic]," H----- continued. "He cuffed my hands with irons behind my back to the metal of the window, to the point my feet were off the ground and I was hanging there for about 5 hours just because I asked about the time, because I wanted to pray. And then they took all my clothes and he took the female underwear and he put it over my head. After he released me from the window, he tied me to my bed until before dawn."

W----- gave a similar account of being hung up by his hands -- like the detainee pictured here -- in a statement to CID investigators on Jan. 21, 2004. "[T]he American police, the guy who wears glasses, he put red woman's underwear over my head. And then he tied me to the window that is in the cell with my hands behind my back until I lost consciousness," he said in a statement.

The Fay report found that there was "ample evidence of detainees being forced to wear women's underwear." Fay concluded that the use of women's underwear may have been part of the military intelligence tactic called "ego down," adding that the method constitutes abuse and sexual humiliation.

On Oct. 21, a few days after most of these photos were taken, the International Red Cross began a three-day tour of Abu Ghraib to evaluate the conditions for detainees. At the end of the visit, the Red Cross told the military leaders at the prison about incidents of "handcuffing, nakedness, wearing of female underwear and sleep deprivation," according to the Fay report.

The military took no action, initially. Two months later, on Dec. 24, Brig. Gen. Janis Karpinski, the head of military police at Abu Ghraib, sent the Red Cross a letter that glossed over the problems "close to the point of denying the inhumane treatment, humiliation and abuse," according to Fay.