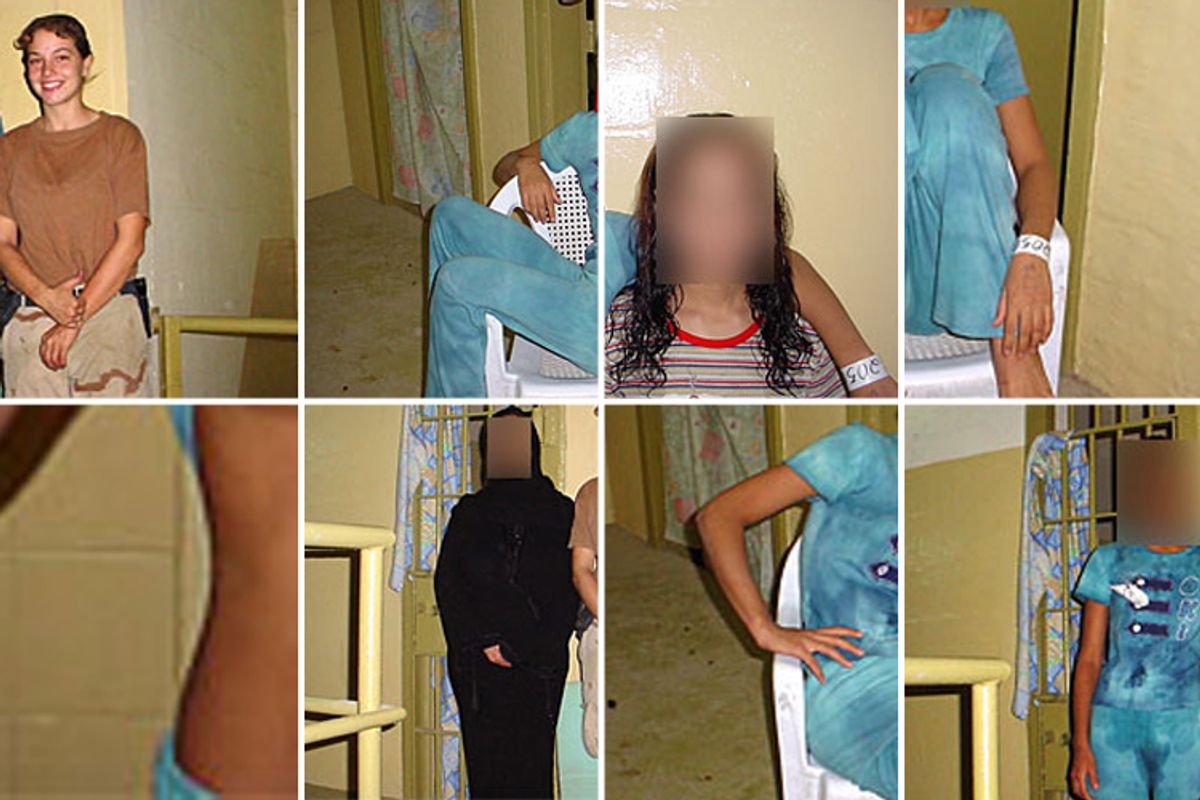 Warning: Photos contain disturbing images of violence, abuse and humiliation. These photos were taken using the camera owned by Cpl. Charles A. Graner Jr. They consist of a series of posed pictures of female detainees, including two detainees who were reportedly arrested on charges of prostitution, and one picture of a male detainee with his hands cuffed behind his back. One photo shows a female detainee exposing her breasts. In the first few photos, Spc. Sabrina Harman is shown posing with the female detainees.

Graner told the Army's Criminal Investigation Command (CID) in April 2005 that the guards at Abu Ghraib would sometimes allow female detainees to roam around in a common area at night. On the night of Oct. 28, 2003, Graner said he remembered taking multiple pictures of two young women, who were later identified by investigators as criminal detainees who had been arrested on suspicion of prostitution.

According to Graner's statement, two other soldiers, Staff Sgt. Ivan Frederick II and a soldier Graner identified as military intelligence, were flirting with the girls. He said one of the women wanted to pose for several pictures. "I took the one, and then she called me back for another one," Graner said. "She pulled her top off." Graner said he gave a disk with the photographs to the person he said was from military intelligence.

A report by Maj. Gen. George R. Fay found "no evidence to confirm if these acts were consensual or coerced; however in either case sexual exploitation of a person in US custody constitutes abuse." Although Graner stated he gave a disk with the photos to someone from military intelligence, Fay concluded that there did not appear to be any direct military intelligence involvement.

Military investigations of Abu Ghraib turned up other incidents of abusive treatment of female detainees that were not shown in photographs. According to the Fay report, one of the most horrific incidents occurred on Oct. 7, when three military intelligence soldiers allegedly assaulted a female detainee. The unnamed detainee told investigators that she was taken to an empty cell, where a soldier held her hands behind her back while another soldier forcibly kissed her. She was then taken to another cell, where she was shown a naked male detainee and told that she would be stripped if she did not cooperate. Finally, she was returned to her cell, and forced to kneel and raise her arms while one of the soldiers removed her shirt. She said she began to cry, and her shirt was returned to her, with a warning that the soldiers would return each night if she did not cooperate. The Fay report found that there was no record of an authorized interrogation of this detainee on that night.

When CID investigators questioned the three military intelligence soldiers, they refused to provide statements. According to the Fay report, the three soldiers, who have never been named publicly, received nonjudicial punishment for failing to get authorization to interrogate the female detainee. They were also removed from future interrogation duty.