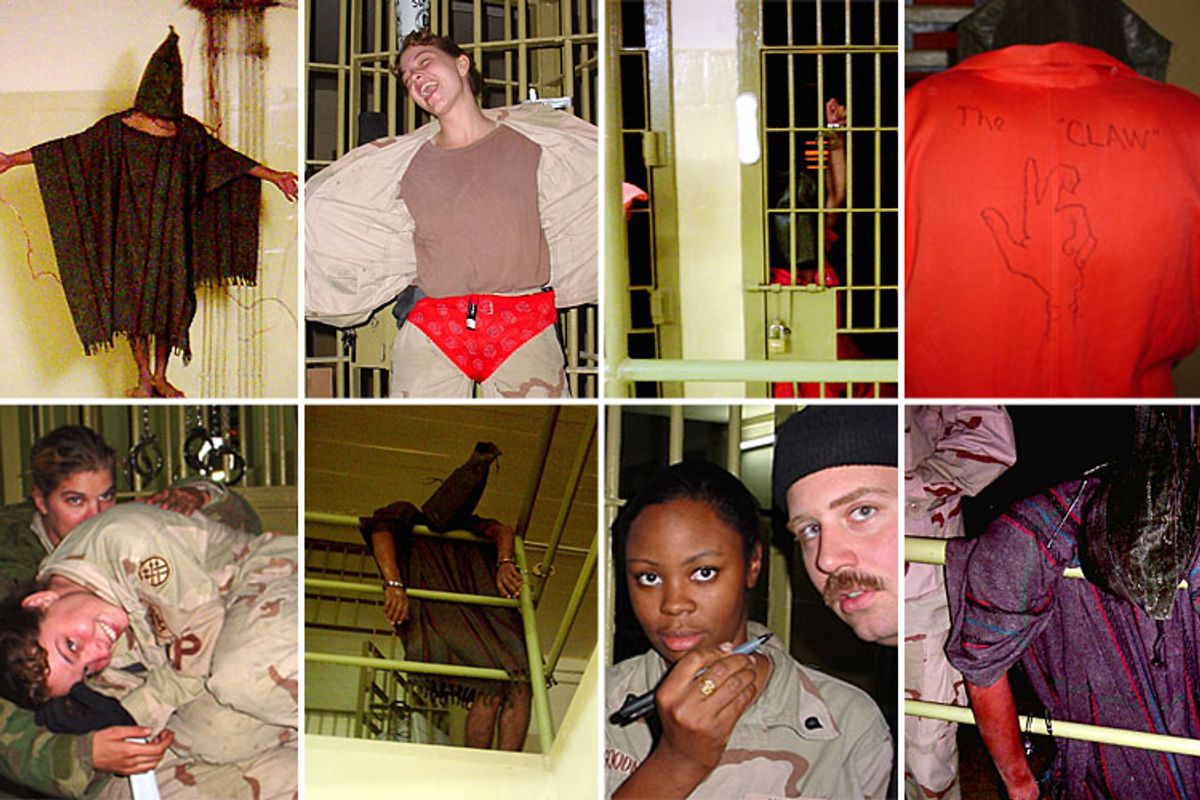 Warning: Photos contain disturbing images of violence, abuse and humiliation. These photos were taken using cameras owned by Cpl. Charles A. Graner Jr., Staff Sgt. Ivan Frederick II and Spc. Sabrina Harman. They depict soldiers removing stitches from a detainee with a cut on his ear, a number of posed shots of the prison guards, including one in which Frederick urinates in a prison cell and two in which Harman wears women's underwear over her uniform, and the abuse of a detainee referred to by U.S. personnel as "Gilligan." In addition to the detainees, the pictures show Graner, Frederick, Harman, Spc. Megan Ambuhl, a soldier the Criminal Investigation Command (CID) identifies as Spc. Goodman and two soldiers the CID identifies as unknown.

One of the most iconic images of abuse to emerge from Abu Ghraib showed a detainee perched on top of a cardboard box, with a hood on his head, a blanket around his shoulders and electrical wires extending from his hands. To the soldiers at Abu Ghraib, this detainee was known as "Gilligan." In early November 2003 an agent from the Army's CID -- the same agency that would later investigate abuse at Abu Ghraib and assemble the evidence and timeline reproduced in this photo archive -- allegedly ordered military police to soften up the detainee by making his life "a living hell."

According to CID documents obtained by Salon, the detainee in this iconic image was most likely a man named Saad, whose full name is being withheld by Salon to protect his identity. On March 11, the New York Times, possibly in error, reported that the detainee was an Iraqi man named Ali Shalal Qaissi. In addition to other evidence to the contrary detailed in a Salon report Tuesday, a CID spokesman confirmed to Salon that Qaissi "is not the detainee who was depicted in the photograph" that appeared in the Times.

CID documents do place a man with Qaissi's description -- including a deformed left hand -- in the military intelligence wing at Abu Ghraib on the night that electrical wires were used. In an e-mailed statement following the Times report, Qaissi told Salon that he remembered another detainee, Saad, who was abused in a similar manner at the same time. "I have seen at least two dreadful pictures showing this horrible experience," Qaissi wrote. "One is me. The other I believe could be Saad because he went before me to the area I had to go, where I was to be interrogated." It is also possible the CID is wrong about the detainee in the photo published by the Times. Lingering questions about the detainee's identity underscore the many details that remain unknown about what happened inside Abu Ghraib.

As part of its mission, the CID has the dual responsibility of investigating crimes committed against U.S. forces and crimes committed by U.S. forces. In November, a CID agent was interviewing Saad as a suspect in the kidnapping and murder of two U.S. soldiers, according to a CID spokesman. In a journal he kept at the time, Frederick alleged that the CID agent ordered the harsh treatment of the detainee. A report including details from Frederick's journal by the Baltimore Sun in May 2004 led the CID to open a new investigation.

In October 2004, the Sun reported that the CID agent named in Frederick's journal was Sgt. Ricardo Romero. In April 2005, Graner repeated that claim, telling investigators that Romero had specifically given orders to mistreat the detainee. "You know his [Romero's] words were, 'Make his life a living hell for the next three days,'" said Graner. "He was to be kept awake for three days and pretty much harassed."

The CID acknowledged that an agent was found derelict for behavior at Abu Ghraib, but would not confirm that the agent was Romero. "One Special Agent who was reportedly identified in Sgt. Frederick's journal as being involved in potential abuse visited the detainee facility to interview an Iraqi suspect as part of an investigation into the kidnapping and murder of two U.S. soldiers," CID spokesman Chris Grey wrote in an e-mail to Salon. "A thorough and impartial investigation found reason to believe that the agent in question was derelict in his duties by making unprofessional and inappropriate comments during his visit to the Abu Ghraib facility." Grey also told Salon that the CID agent investigated for abusing Saad did not participate in the CID's later investigation into abuse at Abu Ghraib.

Some of the techniques military police used on Saad can be traced to Secretary of Defense Donald Rumsfeld's Dec. 2, 2002, memo, including yelling, hooding, forced stress positions and sleep deprivation. "It was him [Sgt. Javal S. Davis] and I, and basically, just yelling at him the whole night, you know, more or less repeating the first half of -- was it 'Full Metal Jacket?' -- loud as you could to him, and then asking him what his name was," Graner told Army investigators. Harman gave a statement to the CID on Jan. 15, 2004, claiming to have put the wires on the detainee's hands. "I was joking with him, and told him if he fell off, he would get electrocuted," Harman said. One year later, Graner spoke to investigators about forcing detainees to stand on boxes, a tactic he claims to have employed with the approval of military intelligence. "You fell asleep, you fell down. Wow, you just woke yourself up," Graner explained.

After the photos were given to CID investigators, the agency interviewed Saad about the abuse. During this interview, on Jan. 16, 2004, the CID did not treat Saad as a hostile detainee but as a cooperating witness. "A tall black soldier came and put electrical wires on my fingers and toes and on my penis, and I had a bag over my head," Saad said in his statement. "Then he was saying 'which switch is for electricity.' And he came with a loudspeaker and he was shouting near my ear. And then he brought the camera and he took some pictures of me, which I knew because of the flash of the camera."

When one night of abuse ended, Saad said he was taken back to his cell. He said he was able to sleep for about an hour before guards came through to conduct the morning head count. "I couldn't go to sleep after that because I was very scared," Saad said.

This set of photographs also includes two images of a bearded detainee with stitches in his ear. According to Graner, this was W-----, the detainee known as "Taxi Driver." The criminal investigation confirmed the possibility that the photos were of W-----.

In a statement, W----- said, "The police started beating me on my kidneys and then they hit me on my right ear and it started bleeding and I lost consciousness." The report by Maj. Gen. George R. Fay said that this detainee blamed the blow to his ear on an unnamed civilian interpreter from the Titan Corp. The military police had a different story. An entry in the military police logbook indicates that W----- "fell and hit bunk due to wet floor in cell" after "PT" (common military shorthand for "physical training"). "[I]nmate received one (1) stitch on Right Ear," the logbook reads.

The Fay report could not confirm if the photos of a detainee with a wounded ear showed W-----.