The rake of Rouen

A new biography depicts Madame Bovary's creator as a sexual adventurer who spent his life at war with his bourgeois self. 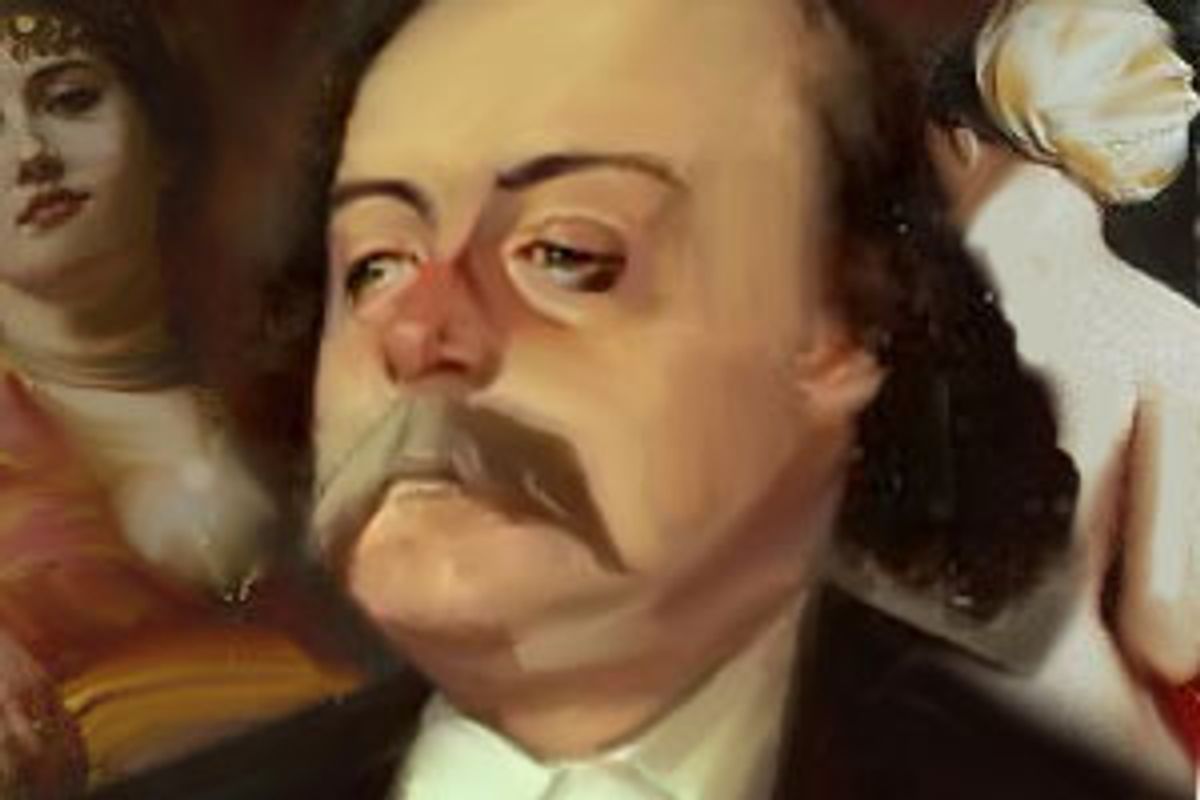 In the spring of 1877, a young Henry James wangled an invitation to a regular Sunday literary gathering at an apartment on the rue du Faubourg Saint-Honoré in Paris. Although such luminaries as George Sand, Guy de Maupassant and Ivan Turgenev were among those in raucous attendance, James was most impressed by the salon's host. "Flaubert was huge and diffident, but florid too and resonant, and my main remembrance is of a conception of courtesy in him, an accessibility to the human relation, that only wanted to be sure of the way taken or to take." Readers who only know Flaubert through the cool, Olympian prose of "Madame Bovary" will be surprised and perhaps even distrustful of this description, with its suggestions of amiable grossness and bumbling insecurity. Readers of Frederick Brown's remarkable new book, however, will understand that James' description is spot on. It has been a long time since so evocative and revelatory a literary biography has come down the pike, one that brings an iconic author so grittily to life. Flaubert's literary stance might have been cache ta vie (hide your life), but after Brown is done with him, it is hard to imagine that anything about this extravagant, exacting, genial and very human author remains masked from our view.

This sort of exposition is particularly useful in the case of Flaubert, who has always been a high-calorie enigma wrapped in a delicate crust of mystery. Born into an eminently bourgeois provincial family, he fought a lifelong battle against his background while never moving out of his parents' house. Author of perhaps the most precisely realistic novel of its time, he was also capable of the Romantic flights of fancy contained in "Salambo" or the heady, crypto-religious philosophizing of "The Temptation of Saint Anthony." Creator of Emma Bovary, the most evocative of all female characters, he never married, and lived with his mother until her death. Supremely radical in his approach to literature, he turned his back on the liberal politics underlying the two revolutions of his lifetime, choosing instead to ally himself with the circle of the reactionary Louis Napoleon. As Brown observes, he was a man "whose sensibility perched at extremes of enchantment with both the material world and platonism, glorifying unruly, sociopathic, large-lunged genius or fussing over stylistic minutiae as obsessively as a Byzantine grammarian."

Flaubert was born in 1821 into a family preeminent among the "rich, inbred bourgeoisie" of Rouen, a market city Brown describes as encased in a permanently "malodorous penumbra." It was a deeply conservative time. France, still reeling from the Revolution and Napoleon, was ruled by the regime of the pious Charles X, "which strove to promote the 're-Christianization' of France." Because his father, Achille-Cléophas, was a doctor, young Flaubert's relationship with bourgeois propriety was undercut from an early age by an awareness of life's darker side. "Unlike other children of privilege, Gustave, born and bred in a city hospital, was exposed from the first to life's crueler dispensations." His education focused heavily on Latin, the language of the Catholic Church and the ruling classes, and there was little doubt that the gifted student was headed toward a career in law and a place among the nation's triumphantly conservative bourgeosie. In response to these oppressive expectations, Flaubert and his clever, rebellious friend Alfred Le Poittevin began to create stories featuring an alter-ego known as "The Kid," a scatological, witty forebear of Ubu and Rimbaud who provided a release valve for the social and sexual pressures building up in the young novelist. With The Kid, Flaubert was able to épater les bourgeois, to "ennoble the gutter and desecrate the temple." The author who would two decades later stand trial for outraging public morals was born.

After a tour of southern France and Corsica, notable for Flaubert's sexual initiation with an older woman in a Marseille hotel, young Gustave began his dreaded legal studies in Paris. Although he somehow managed to complete the course, it only served to confirm his growing belief that he was destined to pursue a career in literature. His final deliverance from a life at the bar came just after his final examinations, when he suffered the first of the epileptic seizures that were to plague him for the rest of his life. This only strengthened his artistic resolve. As with Proust, "sickness offered the possibility of a life in art" for the budding writer.

He soon began work on the first draft of his semiautobiographical novel "A Sentimental Education," though this early version would only vaguely resemble the novel it was to become two decades later. After the untimely deaths of his father and beloved sister, he started "The Temptation of Saint Anthony," even as the events of the 1848 revolution swirled around him. This, too, was left in raw form, and would not be completed and published for another quarter-decade. Although he was pushing 30, Flaubert appeared in no rush to make his name in the frantic Parisian literary scene.

Instead, he embarked on an epic grand tour of Egypt, the Middle East, Greece and Italy with his dear friend Maxime Du Camp. Brown's biography is absolutely riveting as it describes this journey, which combined a prolonged tutorial on the Oriental and classical worlds with "a saga of fornication" that would make even the most die-hard spring-break aficionado blanch. It was as if Flaubert and Du Camp, like so many other repressed 19th century affluent white boys, "had dropped anchor in a dreamworld innocent of moral constraints upon the imagination and of the taxonomical partitions segregating high culture from low in Europe." Indeed, "to judge by Flaubert's notes, no whorehouse between Cairo and Nubia was so low that they wouldn't stoop to enter it. On all fours they crawled into a thatched hut no more than chest high for sex with a belle laide whose furniture consisted of a straw mat and a dim lamp ... on hands and knees they crawled again at Siut, to lie in an even smaller, dimmer hut beside the Nile with a fifteen-year-old girl whom Flaubert found clever and winsome." This priapic tourism culminated with Flaubert's encounter with a legendary courtesan named Kuchiuk-Hanem. "With the deep blue sky as a backdrop, she looked splendid in her striped pink silk trousers and gauzy purple blouse -- a wide-shouldered, bosomy, coffee-colored Syrian with wiry black hair and kohl-lined eyes." After 20 months of this strenuous rutting, it is hardly surprising that Flaubert returned to France ready to settle down to his desk. Within a year, he began work on "Madame Bovary."

Although Brown does not possess the critical acuity of some other Flaubert biographers -- for example, the translator Geoffrey Wall in his 2002 "Flaubert: A Life" or Jean-Paul Sartre in his controversial "The Family Idiot" -- his reading of the author's greatest novel is insightful, especially when it comes to mapping the turbulent soul of its heroine. According to Brown, Emma Bovary is "condemned to mimic transcendence, to wear the trappings of grace over an emptiness of belief ... [o]nly in dramatic epiphanies can she feel real, never in dailiness or routine. Too earthbound for flight, and too flighty for happiness on earth, she is an actress living life 'as if'." She also brought down more trouble on Flaubert than any of the earthly women he was ever to know, landing him in a Parisian court on charges that his novel was "an affront to decent comportment and religious morality." He beat the rap, though one wonders how much the scandal influenced his choice of subject for his next novel, "Salambo," set harmlessly in 241 B.C. Carthage.

For the next 20 years, Flaubert was to live a life of uneasy literary fame, never again reaching the heights of "Madame Bovary." "Salambo," "A Sentimental Education" and "The Temptation of Saint Anthony" were roundly slammed by critics. His one attempt at theatrical writing, "The Candidate," failed miserably -- Brown quips that the characters are so wooden that it "might have succeeded brilliantly as a puppet play." Only "Three Tales," most notably the sublime 'A Simple Heart,' was deemed a worthy successor to "Madame Bovary." His final work, the expansive, wondrously strange "Bouvard et Pécuchet," remained unfinished at the author's death at the age of 58.

Perhaps the most valuable accomplishment of Brown's biography is to situate Flaubert squarely amid his turbulent times, echoing the achievement of the biographer's 1995 "Zola: A Life." During Flaubert's lifetime, France experienced both rapid modernization, seen most readily in Baron Haussmann's radical re-altering of the Parisian cityscape, and constant political upheaval. Although Flaubert often made noises about being above this historical hubbub, he had a knack for landing himself smack dab in the middle of it. In 1848, a curious Flaubert and Du Camp were actually among the first to enter Tuileries Palace after Louis-Phillipe's hasty abdication; during the disastrous 1871 war against Prussia, Flaubert was evicted from his beloved lifelong home Croisset by invading German troops, and later attended the court-martial of Communards after their unsuccessful socialist uprising in Paris. Despite being a stridently self-professed 'bourgeoisophobe,' however, Flaubert had little time for the revolutionaries. As Brown points out, the author, an "affluent bourgeois sustained by unearned income from [his family's] farmland, had no use for egalitarian doctrine. Declaring that only three or four hundred men a century has historical weight, he regarded utopian socialism as the worst despotism. Inherently unintelligent was the mass qua mass."

Flaubert had an equally problematic relationship with his lovers. He had a tendency to be at his best when the object of his affection was not actually nearby. His first love was the unattainable wife of a Parisian music impresario; his longest relationship was with Louise Colet, a would-be poet whom Flaubert kept at arm's distance, proving his lifelong belief in the "unthinkableness of marriage, bourgeois or otherwise." It was a credo that deeply infused his work. "In Flaubert's fictional universe, marriage kills," as Brown so aptly points out. His only successful female relationships were with kinsfolk such as his beloved niece, his sister and his mother, or his platonic friendship with George Sand in the last years of her life.

What ultimately emerges from this exhaustive but never exhausting biography is a portrait of an artist in a state of constant war against the bourgeois qualities stamped indelibly on his soul. He once stated that his motto was to "[l]ive like a bourgeois but think like a demigod." Upon closing Brown's biography, it is hard not to feel more attracted to the troubled bourgeois gentleman than to the artistic demigod. The Flaubert who wrote highly detailed novels set in the classical world or crawled on all fours into Levantine whorehouses could have been any 19th century saloniste, worthy of little more than a footnote in a biography. When his attention turned to the narrow Norman world he hated but could never leave, however, then genius resulted. Whether it be in the form of Emma Bovary, or Frederic Moreau of "A Sentimental Education," or Félicité, the aptly named servant girl of "A Simple Heart," his art took on a majesty that made the ornate, expansive landscapes of the rest of his work look puny.