The tears of Snow

The first TV briefing by Bush's new press secretary was a weepy triumph -- but is it too late for style points to matter? 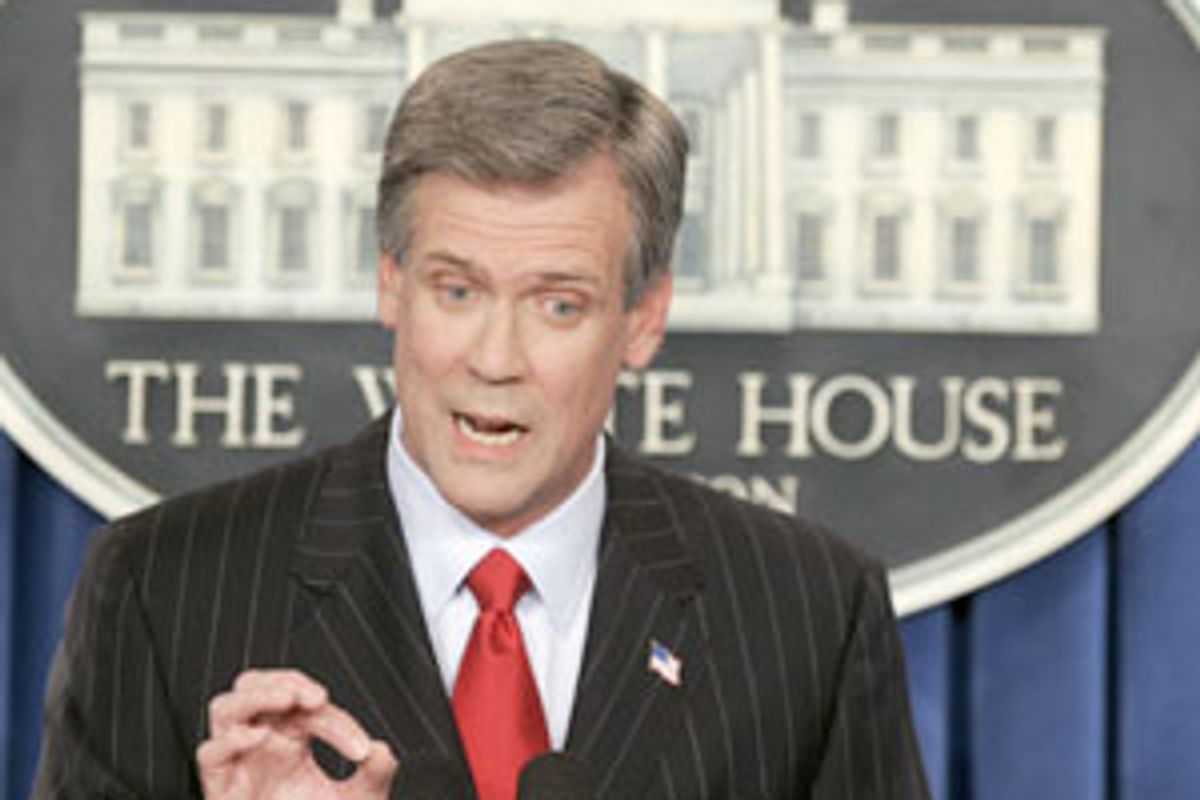 Tony Snow, the president's new press secretary, wants you to know that he has feelings, he hurts, and he needs a coffee cup to get through his day. He is, in other words, a human being, and that makes him a dramatic departure from his predecessor, Scott McClellan, the doughy master of equivocation and non sequitur who behaved most days like a misfiring automaton, barely betraying any light behind his eyes.

Snow is different. Not 30 minutes into his first televised White House press briefing, the man was choking back tears. A television reporter asked why he was wearing a yellow Lance Armstrong bracelet, which flashed each time Snow reached for his paper coffee cup on the podium. "Because I had cancer last year," Snow said. And then he lost his breath. "It's going to sound stupid, and I will be personal here but, um..."

His eyes were suddenly wet and bloodshot. He fumbled and stammered and grabbed at the podium for the next 60 seconds, an impossibly long time in a cramped room filled to the brim with about two dozen television cameras and well over 100 journalists. The still photographers fluttered to life, zooming in for a close-up, waiting for an actual tear to drop.

"I'm having my Ed Muskie moment," Snow said, referring to the 1972 Democratic presidential candidate who appeared to have cried on the campaign trail. "I lost my mother due to cancer when I was 17," Snow continued. "The same thing, colon cancer."

Tears had been fatal for candidate Muskie, the Democratic front-runner who never got the nomination after appearing emotionally unstable. But for press secretary Snow, the tears were golden, appearing as anything but forced or phony -- a revolutionary act of sincerity from a discredited pulpit. They were, by all rights, the involuntary expression of a real man who feels blessed to be alive and honored to serve his country in the impossible job of selling George W. Bush, a president with a 32 percent approval rating.

"I don't see it as a personal sacrifice to answer a call from the president of the United States to come and serve," said Snow, the 50-year-old native of Ohio, channeling dialogue from Aaron Sorkin's "West Wing." "That's one that still gives me chills. I mean, I go to the end of that lawn, I look back at the pillars and think, 'Man, I'm working here.'"

By the end of the briefing, 40 minutes later, the reviews were raves. Snow had apparently passed his initiation rite. Members of the press corps were thankful for warm blood. As they packed up their notebooks, they were visibly giddy, offering approbations like, "That was A-1" and "It's going to be fun." Even Helen Thomas, the briefing room's matron saint and the press secretary's principal scourge, admitted to being moved by the new guy. "I thought he had a lot of charm," she was overheard saying loudly. "But he didn't answer the questions."

There, of course, is the rub. Snow, true to his name, is no model of transparency. "Al-Qaida doesn't believe in transparency," Snow quipped at one point. In a matter of minutes, he refused to discuss recent reports on phone company data mining; White House relations with Arnold Schwarzenegger; the president's views on contraception; or Karl Rove's plans to resign if indicted.

But then no press secretary, including the sainted Mike McCurry of the Clinton years, has ever been close to candid with the American people. The press secretary's job has always been far more duplicitous, and the press briefing has always been a complicated dance of competing interests. Reporters gather impressions and string from press briefings -- a stray fact here or there, a hint at what makes the White House uncomfortable to talk about. The briefings have never been about frank discussions.

Even by these low standards, however, McClellan was a disaster, a fate that Snow is unlikely to match. When McClellan took the job in July 2003, the war in Iraq appeared to be winding down and the president still enjoyed a 58 percent approval rating. The administration policy of demonizing the press as unpatriotic liberal elites was still in full swing. The conservative movement and the movement's popular leaders on talk radio were squarely on board. McClellan, who was never equipped for prime time in any era, was used less as a spokesman than a stooge -- a flack who would not, or could not, do anything more than lecture the press on its own craven distortions.

Snow begins his job in a completely different environment. The president's poll numbers have tanked, the conservative movement has splintered, and right-wing talk radio hosts, Snow included, have turned against the administration on spending and immigration. The institutional press, meanwhile, has reclaimed lost territory as the credibility of the president and Congress slide lower and lower with each news cycle. Snow has not arrived to make war on the media, like his predecessor. He comes to ease tensions, to possibly chart a path to an ever-elusive peace.

Unlike McClellan, Snow speaks lucid sentences with passion. A former speechwriter from the first Bush White House in the 1980s, he is comfortable with common vernacular and colorful language. "I don't want to hug the tar baby of trying to comment on the program," Snow said at one point in the briefing, an antiquated, and racially perilous, reference to African-American folklore. A reporter seated on my right spoke for the crowd, exclaiming under his breath, "He said, 'Hug the tar baby.' My god." Snow also looks good on television, with a long jaw, a deep brow and the soft smile of a church pastor.

What's more, Snow has, for now, credibility among the president's core supporters, the Fox News conservatives. Even before McClellan involuntarily peddled falsehoods about the White House's involvement in the Valerie Plame scandal, it was hard to take him for anything more than an acolyte and tool of the president. But in the past, Snow has called the president an "embarrassment" and his domestic policy "listless." "When it comes to federal spending, George W. Bush is the boy who can't say no," Snow wrote in a 2003 newspaper column.

President Bush is never going to win back the support of his liberal detractors, who are outraged by the war in Iraq, the assault on the environment and the huge tax breaks for the wealthy. But the White House can still win back the support of the GOP faithful with blunt talk and a clear message. With just six months until the 2006 midterms, a grown man who can cry may be just what the president needs.