At the first Abramoff trial, a Bush official's lawyer asks, What's the harm in helping a bud? 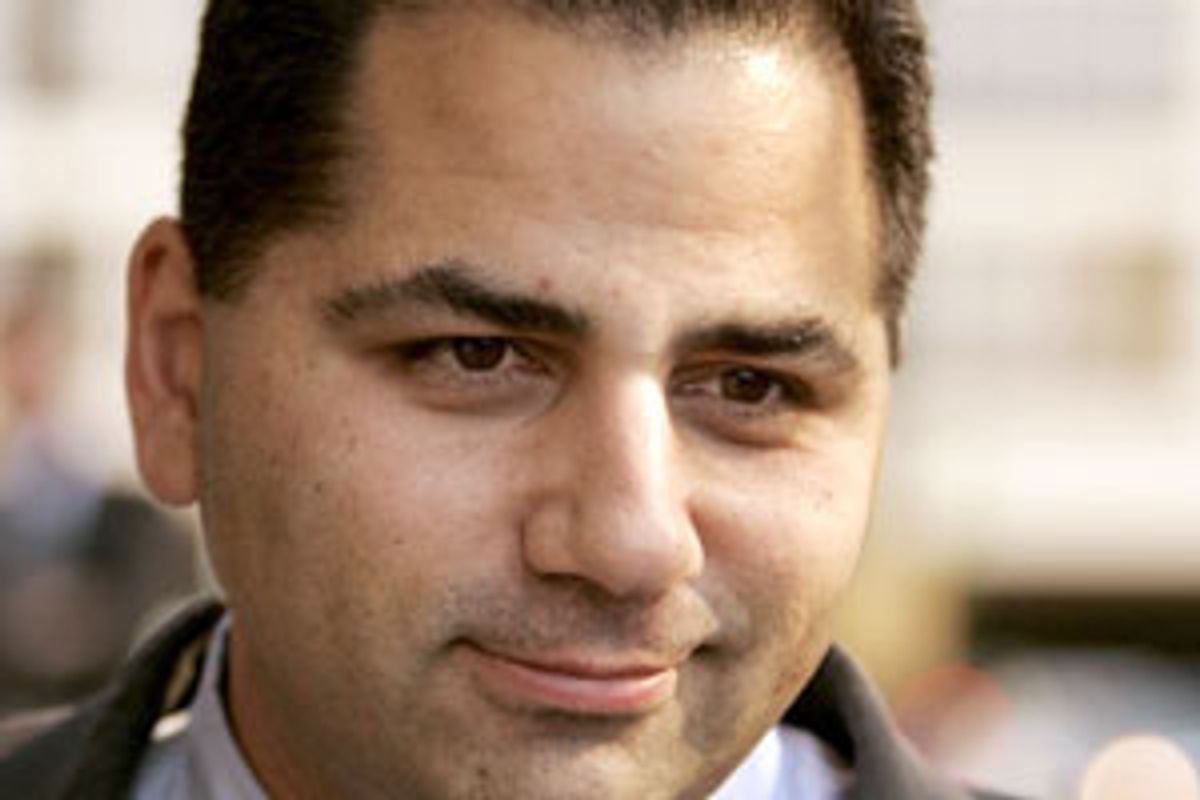 In this season of political corruption, serial indictments and freezer-wrapped cash, it is all too easy to forget that our embattled public officials are people just like us. They have hobbies. They go home to their families. And they nurture lasting friendships. At least that is what their attorneys want you to think.

Take the case of David Safavian, the former top procurement official in the Bush White House, who is on trial on federal charges of lying about his relationship with Jack Abramoff, the disgraced Republican lobbyist. In her opening statement to the jury Wednesday, Barbara Van Gelder, Safavian's lawyer, insisted that her client was guilty of nothing more than being a good buddy. He did nothing unethical or criminal, she said. He just acted like a pal.

"They had a common interest in golf and racquetball," explained Van Gelder, a compact woman with short gray hair and owlish glasses. "David Safavian was not in Jack Abramoff's pocket, but he was a friend and he answered his questions."

Van Gelder made her game plan for the defense obvious for the high-profile trial, which is slated to last a week. The Justice Department is arguing that Savafian repeatedly lied to government investigators and ethics officials about the favors he was doing for Abramoff, a deception that allowed the Bush official to join a pricey golf junket to Scotland.

But Van Gelder's strategy is to change the topic. She wants to put Washington-style friendship on trial, arguing that the favors Safavian did for Abramoff were just gestures among chums. As Van Gelder told the jury, "David Safavian was proud of his friend -- and proud of his friend's accomplishments."

The defense carries with it a whiff of desperation, since the evidence against Safavian is otherwise overwhelming. A golfing buddy of Safavian, for instance, never deleted his e-mails, leaving in his computer hundreds of incriminating missives. The e-mails detail Abramoff's repeated attempts to use Safavian to help him secure two pieces of federal real estate -- a former post office in downtown Washington and a parcel in Maryland, where Abramoff hoped to locate a Jewish high school. At the time of the golf junket, Safavian had the useful perch as the chief of staff at the General Services Administration, which just happens to be the government's landlord and controls its real estate.

By itself, Abramoff's chumminess with Safavian was neither exceptional, nor obviously illegal. Washington lobbyists -- like journalists, political fund-raisers and even the Avon sales force -- derive much of their power and influence from the friends they keep. But even these relationships (call them "friendships with benefits") are regulated by federal ethics laws. And it is here that prosecutors found evidence that Safavian allegedly crossed the line from sleazy to illegal. In July 2002, Safavian sent an e-mail to the GSA's ethics office, asking if it would be permissible to go on a paid golf trip with Abramoff to Scotland. In his request, Safavian described Abramoff as "a lawyer and lobbyist, but one that has no business before GSA (he does all his work on Capitol Hill)."

The ethics office approved the trip the next day on the grounds that "neither Mr. Abramoff nor his firm does business with or is seeking to do business with GSA." With the green light and the greens beckoning, Safavian happily jetted off on a private plane with Abramoff and six other lucky guests for five days playing the St. Andrews course and three more glorious nights at a luxury hotel in London. To pay for the trip, Safavian gave Abramoff a check for $3,100, even though the Justice Department calculates that the trip cost Abramoff more than $16,000 per person.

The government contends that Safavian lied about Abramoff having "no business before GSA," an interpretation of the truth that's difficult to refute. The e-mails clearly show that at the same time Safavian was planning on joining the Scottish golf junket, the GSA official was helping to provide Abramoff with information about the best way to obtain the two parcels of federal land, which were controlled by the GSA. In addition to making several internal queries on Abramoff's behalf, Safavian obligingly set up a meeting between Abramoff's wife and GSA officials. Safavian even arranged another convenient golf outing -- that included the Abramoffs and Stephen Perry, who directed the GSA.

This is where the friendship defense plays big-time. According to Van Gelder, Safavian's contacts with Abramoff were nothing more than the casual rapport among longtime friends. "He did not lie, he did not impede, he did not evade," Van Gelder told the jury. "It was a personal issue for David Safavian ... This is not business."

If Van Gelder can somehow convince the jury that friendship always trumps business in Washington, the attorney will have single-handedly opened a loophole the size of Abramoff's hat in federal ethics regulations.

That's because, when you get right down to it, there is often no difference between business and friendship in the nation's capital -- they are two sides of the same coin. The Washington friendship is like the Hollywood friendship, partly sincere and partly self-interested. For a lobbyist like Abramoff, or any glad-handing politician, a well-placed friend is money in the bank.

As it stands today, the federal ethics law makes it clear that friendship is not a loophole to allow bribes and corruption. The federal ethics manual allows employees to accept gifts from friends or family only if "it is clear that the gift is motivated by a family relationship or a personal friendship rather than the position of the employee." As Stephen Gillers, an ethics expert on the faculty of New York University law school, puts it, "There is no friendship exemption for a transaction that is deemed as business by ethics rules."

Van Gelder's bold theory of friendship has to surmount a particularly intractable obstacle -- Abramoff himself has denied that it was true. Even though the former lobbyist who is awaiting sentencing after pleading guilty is not expected to testify at the trial, Abramoff has offered his own description of his relationship with Safavian. Just days before Safavian's discount junket to Scotland, a colleague of Abramoff asked why the GSA official had been invited. Abramoff's response was right to the point. ''Total business angle," the lobbyist wrote. "He is new COS [chief of staff] of GSA.''

So much for the intense bonds of friendship in Washington.