Which way to the White House?

Russ Feingold and Mark Warner electrified Democrats in New Hampshire this weekend -- and underscored a choice of divergent paths toward 2008. 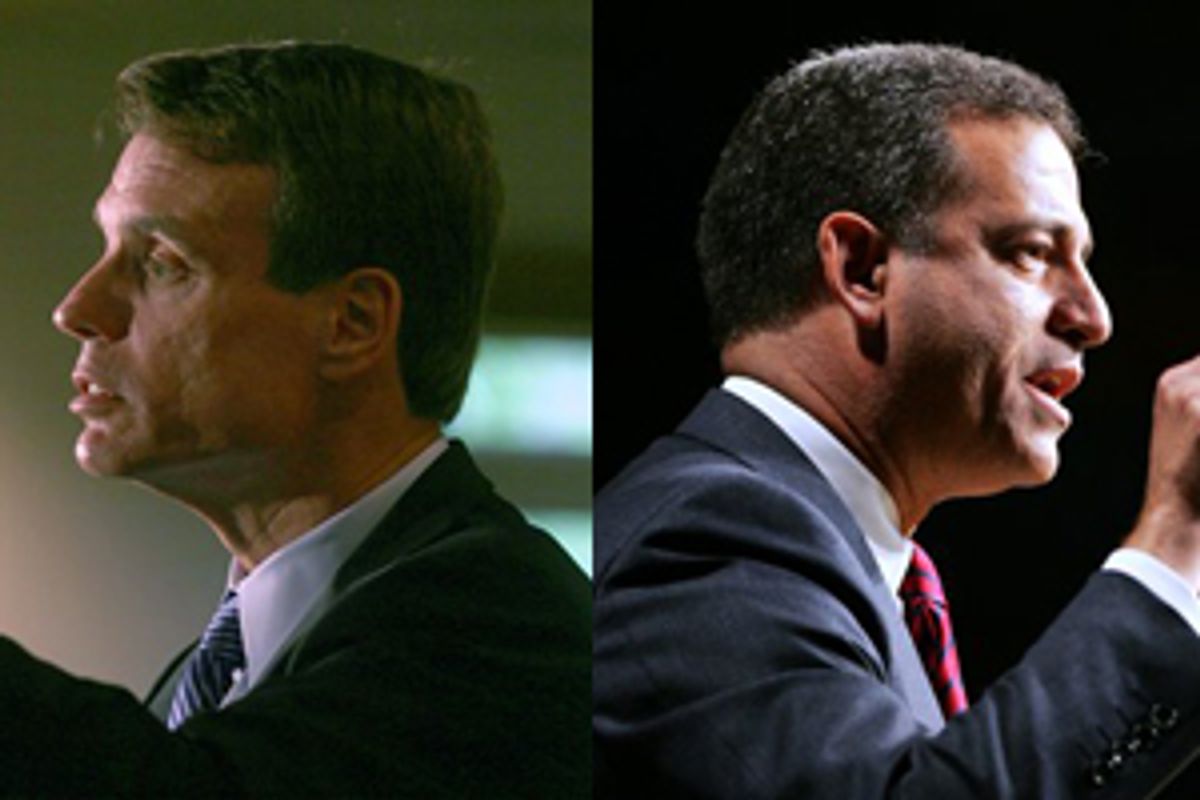 Maybe the big political story of the weekend was Russ Feingold and the half dozen standing ovations that the Wisconsin senator earned during his fiery Saturday breakfast speech to the state Democratic convention.

Or perhaps it was the rock-star status awarded to Mark Warner as the toothy former Virginia governor signed autographs and posed for pictures ("The one part of this job I've got down pat is the photo ops") in a light rain outside the party convention before giving a polished, largely autobiographical luncheon address.

However you score it, this weekend was a start-your-engines moment. With Feingold and Warner as the lure, the New Hampshire Democrats held their biggest state convention in 30 years, with 800 party activists flocking to the campus of Saint Anselm College.

More than 17 months before the primary, the 2008 Democratic presidential race has already become a major New Hampshire cottage industry, even with Hillary Clinton doggedly maintaining the comic pretense that she is solely interested in her lopsided Senate reelection campaign. In just the next two weeks, four other Democratic presidential dreamers (Sens. Evan Bayh and Joe Biden, Iowa Gov. Tom Vilsack and former Senate Majority Leader Tom Daschle) will be popping up in New Hampshire to selflessly aid local candidates.

Hillary and probable non-candidate Al Gore aside, the two Democrats who have had the best run of it in 2006 are unquestionably Feingold and Warner, representing the purist and pragmatic wings of the party. Feingold has made other Democrats look timorous by championing withdrawal from Iraq and a Senate resolution censuring the president. Warner has emerged as the party's latest Southern white knight, the red-state dragon slayer who combines a sterling record as governor with an appealing business background as a mega-rich cellphone entrepreneur who helped found Nextel.

Feingold and Warner have, in effect, become the book ends surrounding a hefty, but potentially unreadable, tome called, "It Takes a Village of Consultants: The Cautious Political Career of Hillary Clinton." As New Hampshire Democratic chairwoman Kathy Sullivan put it, describing Feingold and Warner in advance of the state convention, "They represent two divergent views of the direction that the Democratic Party should go in."

The Iraq war serves as a prime illustration of this yin-yang debate. Feingold in his speech was characteristically direct: "Why are so many Democrats too timid to say what everyone in America knows? It's time to redeploy the troops. It's time to bring the troops out of Iraq. I say bring them home by the end of the year."

Warner's position is a trifle more nuanced and a tad more boring. As you deal with the following extract from Warner's speech, just remember the Little Engine That Could. If you repeat, "I think I can," enough times, you'll get through it.

"The new Iraqi government," Warner said, "has to start really showing the fortitude and its own responsibility to care about its own people -- and that means months, not years, in terms of the ability to step up and disband the militias and try to bring about some level of stability. Now, if we're going to make that happen, the only way it can happen is if we involve the balance of the Iraqi neighbors. Bring them all to the table. Form some level of a Regional Contact Group, so this is no longer simply an American problem."

It is tempting to reduce the political choice to dueling bumper stickers reading: "Bring Our Troops Home for Xmas" and "Form a Regional Contact Group -- Now!"

While Feingold's position on Iraq comes far closer to reflecting the sentiments of the Democratic Party's activist base, the senator will be battling the perception that he cannot win the 2008 general election. This is not of some inside-the-Beltway cabal, but the kind of comments you hear repeatedly from Democrats in places like New Hampshire. As state Sen. Martha Fuller Clark, an unsuccessful 2002 congressional candidate, put it, "I'm really interested in Mark Warner. He's a compelling candidate." Then she uttered a small sigh. "I wish the country was ready for Russ Feingold."

For his part, Warner tried to downplay the cleavage in the party, since he is, most assuredly, not running as the 2008 version of Joe Lieberman. Warner has added a few red-meat lines to his still evolving stump speech, mostly notably his call for "an administration that doesn't have an on-and-off switch when it comes to following the law."

Chatting with a small group of reporters after the luncheon, Warner implied that he agrees with Feingold on the dreams, but not the means. "I have tremendous affection for Senator Feingold," Warner said. "He's a very principled voice. I have the same frustrations that he has about Iraq." But a few beats earlier in the group interview, Warner also underscored his belief that change has to come through national "consensus" rather than "repolarizing the country."

Although Feingold had headed off for another speech in Maine long before Warner arrived in New Hampshire, he had anticipated the critique of Democrats who worry that boat rockers are not vote getters. "I just remind everybody," Feingold said in his speech, "Democrats were in the majority in the United States Senate when we voted for the Iraq war and we passed the USA Patriot Act. It's not enough to be just in the majority. You have to stand for something."

In June 2002, I made my first trip to New Hampshire for the 2004 presidential cycle. Observing Feingold and Warner this weekend for the first time in a primary state, I was intrigued to discover that both candidates are more adept at this stage than their counterparts were four years ago.

As the Senate's longtime naysayer, Feingold offers an authenticity in his left-wing political persona that Howard Dean -- the moderate governor of Vermont who went on to oppose the Iraq war -- could never match. Warner boasts the magnetic appeal of a John Edwards and the easy charm of a winner. (Asked about his resemblance to Bobby Kennedy, Warner joked, "It's my horse teeth.") But, unlike Edwards in 2002, Warner brings with him a hefty record of accomplishment as a governor.

In fact, maybe the best headline for the weekend should be, "New Hampshire Democrats Get Along Fine Without Hillary."