Who's afraid of the big bad gay marriage amendment?

Bush's feeble "family values" ploy is just a dutiful payoff to his base -- and it won't make much difference in November. 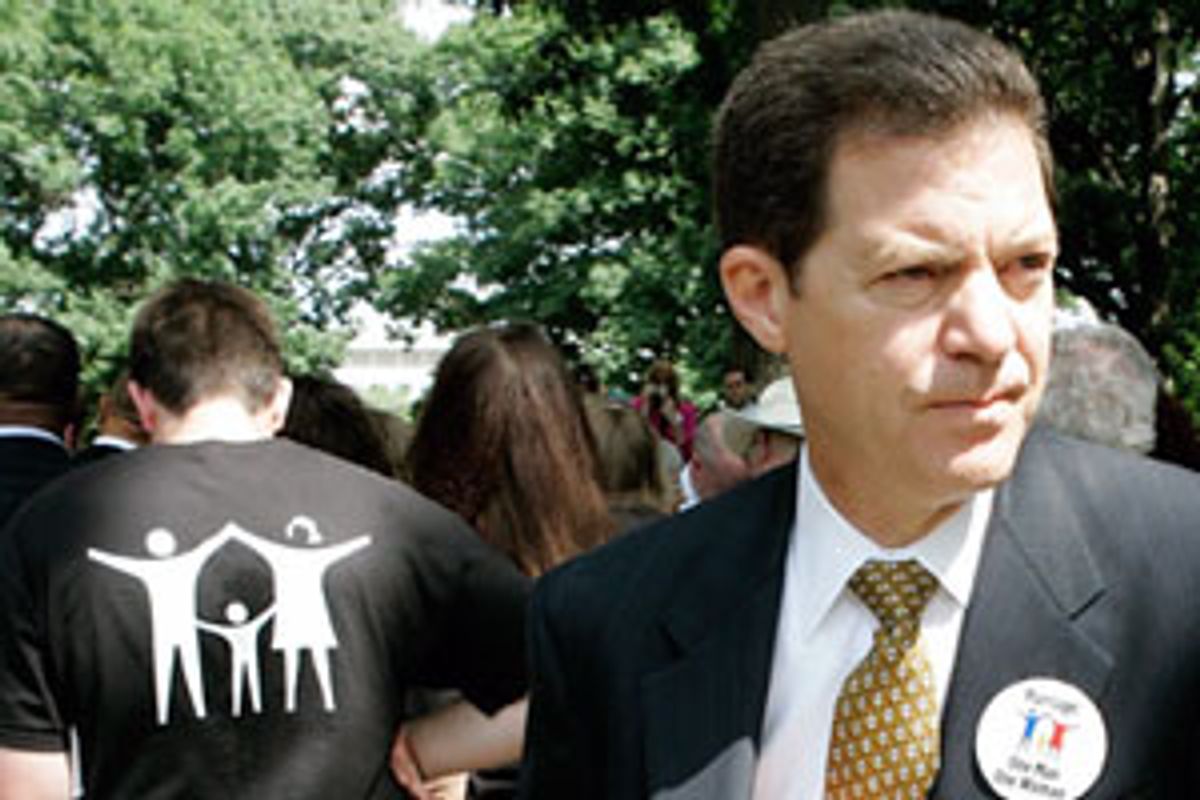 There is something queer about this week's Senate crusade to outlaw gay marriage. If you listen closely, the leaders who oppose single-sex unions refuse to talk about gay people. They talk about activist judges, welfare rolls, the rights of voters and the birthrate of single mothers in Scandinavia. But there is not a gay man, a lesbian woman or a bisexual teenager in the mix.

Kansas Republican Sam Brownback, a 2008 presidential contender, led the charge for a constitutional amendment on the Senate floor Monday, dominating the debate with a handful of blue-and-white charts that he said showed the need to ban same-sex marriage. He had line graphs, bar graphs and circle graphs. He spoke about French law and Dutch sociology. He went on about the benefits of two-parent families. "It's important that a child be raised between a loving couple," Brownback declared, a phrase that seemed, at first, to be an argument in favor of gay marriage. "Developmental problems are less common in two parent families." He said that welfare encourages out-of-wedlock births and called for more research on marriage. But the Republican senator made no real mention of men who love men or women who love women.

In fact, the principal argument mounted by social conservative leaders like Brownback has more to do with the fragile state of heterosexual marriage than homosexuality. Their convoluted logic works like this: If society approves of long-term homosexual monogamy, then the "institution of marriage" will be weakened. This will lead straight people to abandon monogamy and harm the welfare of the nation's children, who benefit from stable, two-parent families. "Our policies should aim to strengthen families, not undermine them," explained President Bush in his Monday address to amendment supporters. "And changing the definition of marriage would undermine the family structure."

This is why Brownback has been spending so much time studying Nordic marriage trends. He believes there is a direct (albeit inverse) correlation between gay marriage and heterosexual fidelity. "Where gay marriage finds acceptance, marriage virtually ceased to exist," he said in the Senate, reading aloud from one of his big blue-and-white posters, this one labeled "Scandinavia." "The institution no longer means much of anything."

These straight-marriage-in-trouble arguments are everywhere in the current debate. Just a few hours earlier, they had dominated a Monday press conference in the Capitol, just a few feet off the Senate floor. "When marriage declines, children and society suffer," explained Matt Daniels, the founder of the Alliance for Marriage, an umbrella group of churches and synagogues that wrote the anti-gay-marriage amendment. "Violent crime, youth crime, welfare dependency and child poverty track more closely with family breakdown than with any other social variable, including race and income level."

Daniels, who describes himself as the child of a single welfare mother, had gathered black pastors, Hispanic leaders, rabbis and a Mormon elder to make the case against lasting homosexual bonds. But rather than talk about gay marriage, a dozen speakers, including Colorado GOP Sen. Wayne Allard, took turns expounding on the importance of loving, two-parent homes for children. They talked about the damage done by deadbeat dads in the inner city, and the importance of family in minority communities. As the Rev. Eve Nunez, an Arizona pastor put it, "America has been wandering in a wilderness of social problems caused by family disintegration."

The press corps who had gathered for the event appeared universally baffled by the argument being made from behind the microphones. "How would outlawing gay marriage encourage heterosexual fathers to stick around?" asked the first wire service reporter to be called on for questions. "Why not outlaw divorce?" another scribe asked Allard later.

In many ways, the institution-of-marriage argument is tailored for sound bites, not serious debate. It appeals directly to those Americans who already believe in a wave of secularism that is destroying the country's moral fabric. But it may also be an argument of last resort. As it stands, the polls say about three in five Americans oppose gay marriage, though only two in five support amending the Constitution to ban it. That said, almost all the trend lines point in a liberal direction. Last month, the Gallup Poll reported that 54 percent of Americans believe that homosexuality should be considered an "acceptable lifestyle," up from 34 percent in 1982. In the same time period, the percentage of Americans who think homosexual relations between consenting adults should be legal has risen from 45 to 56 percent. Young Americans are the most likely age group to support gay marriage and the least likely group to consider it a make-or-break issue, a fact that should make Republican political strategists wary.

Furthermore, the American Psychological Association has concluded that gay and lesbian parents are as likely as straight parents to provide supportive healthy environments for their children. There is no scientific evidence that children of homosexual parents are more likely to suffer abuse, psychological hardship or homosexual tendencies. Gay couples have been found to be just as happy -- and just as unhappy -- as heterosexual couples and similarly committed to long-term relationships. Despite significant social stigma, the APA describes multiple surveys that show between 40 and 60 percent of gay men and 45 and 80 percent of lesbian women are currently involved in romantic relationships.

Given these facts, it is perhaps understandable that activists who argue against gay marriage focus their fire on the failures of heterosexual marriage. It is also understandable that journalists, who are themselves largely baffled by the paucity of data behind the argument, focus on reporting about the politics of the issue. As it stands, there is no hope that the marriage amendment will pass Congress. This has led Democrats to cry foul, as if it is a great outrage that a political party would attempt to score political points in Congress.

But both Republicans and Democrats say there is little evidence that the ploy will have any real impact on the 2006 election. "These kinds of issues, they may affect the national atmospherics, but in terms of how we run elections, we are focused on local issues," said Ed Patru, a spokesman for the National Republican Congressional Committee, which is coordinating the GOP's 2006 House effort. Religious groups are also not treating it as a partisan issue. James Dobson's Focus on the Family has taken out radio and print ads in 13 states, claiming that 16 senators do not "believe that every child needs a mom and dad." But of the group Dobson has targeted, most of them are not up for reelection this year and six of the senators are Republicans, including popular stalwarts like New Hampshire's John Sununu and Pennsylvania's Arlen Specter. A separate ad in USA Today, paid for by Dobson's group and its ally, the Family Research Council, attacked both Democratic Sen. Hillary Clinton and Republican Sen. John McCain for opposing the amendment.

Despite predictions to the contrary, the current debate does not appear to be another stroke of Machiavellian brilliance from presidential advisor Karl Rove, but simply a dutiful payoff to the president's base voters. "He couldn't not do it," explained Richard Viguerie, a prominent conservative activist who believes that gay marriage will not have much of an impact in 2006. "He's got an election coming up and he is 30 percent in the polls. Nothing, Dr. Samuel Johnson told us, focuses the mind like an impending hanging."

Whatever its role in the 2006 campaign, the debate on gay marriage will continue. At the Monday morning press conference, Allard announced that he hoped the current debate over amending the constitution will become an annual rite in Congress. "It takes a while, I think, for the Senate to realize how the Americans feel," said Allard, whom Time magazine described last month as one of the five worst senators. "It takes a while for the American public to realize what has happened."

He was referring, yet again, to the continued erosion of stable, heterosexual, two-parent homes in America. Time, of course, will tell if he is right. But it's a long shot, to say the least. The American people are not given to amending the Constitution to punish one group of people (committed gay and lesbian couples) for the sins of another group (uncommitted straight couples). The last time it happened was the 18th Amendment in 1919, when the United States decided that the danger of alcohol abuse for some outweighed the pleasures of an evening drink for many. Fifteen years later, the American people realized the error of their ways and ended Prohibition. Despite predictions to the contrary, our union remained strong.