Rove in civvies isn't such an ugly sight

Why Fitzgerald's decision not to indict "Bush's brain" is good for the nation (and even the Democrats). 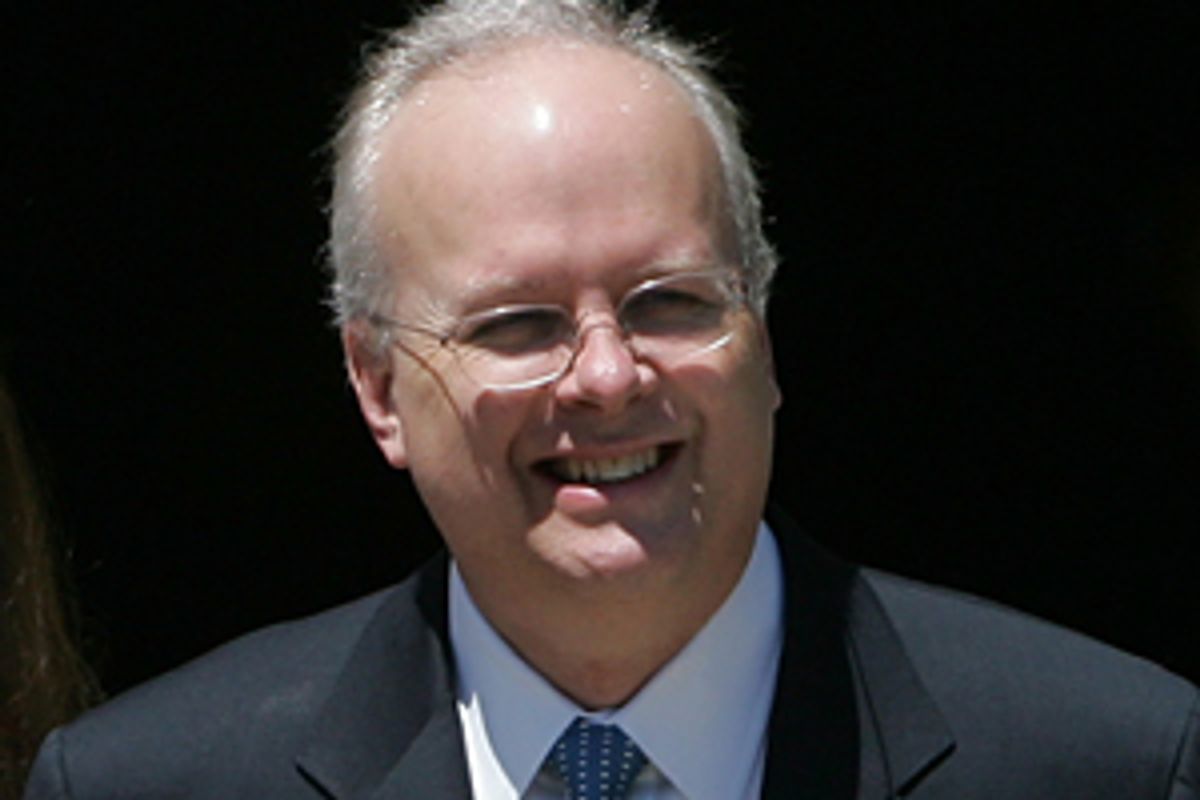 Instead of a new celebration of Fitzmas, we now get Fitzfizzle as special prosecutor Patrick Fitzgerald's investigation into the CIA leak case goes flat.

The reaction to Fitzgerald's decision not to try to send Karl Rove off to a new career working in a prison laundry was as predictable as the plot of a "Road Runner" cartoon. The Republican National Committee rushed out a smug press release headlined, "Wrong Again: Prejudging Karl Rove Is Latest Example of Democrats' Overheated Rhetoric and False Statements." Downbeat Democrats struggled to keep hope alive by vainly calling for a congressional investigation (veteran California Rep. Henry Waxman) and pleading for an after-action report from Fitzgerald (Chuck Schumer, who heads the Democratic Senate Campaign Committee).

But beyond the partisan sound bites, there is a compelling argument that the nation -- possibly even the Democrats -- is better off with Rove free to roam the West Wing plotting strategy for the 2006 Republican campaigns rather than hunkered down in his lawyer's office preparing for the trial of century.

Special prosecutors bring with them the proven danger of Starr-chamber justice, as the Ahab-like pursuit of Bill Clinton demonstrated. Fitzgerald, in contrast, displayed uncommon restraint last October by limiting himself to going after Scooter Libby, Dick Cheney's former chief of staff, for what appears to be, judging from the indictment, a brazen case of perjury.

Clearly, Rove presented Fitzgerald with a much-closer-to-the-line judgment call. Nearly eight months and five Rove appearances before a new Plamegate grand jury came and went without a verdict from the special prosecutor. The indictment of a president's closest advisor should not be a heads-it-will-be-leg-irons, tails-it-will-be-exoneration coin-flip decision. A banana-republic quality clings to nations that fight out all their political differences in criminal courts.

Many Bush critics see the Fitzgerald investigation as the only window into the manipulation of intelligence before and after the Iraq war. But a legal proceeding is different from the congressional hearings that should have been held on the decision to go to war in quest of illusory weapons of mass destruction. As Fitzgerald pointedly said during his press conference after the Libby indictment, "I think anyone who's concerned about the war and has feeling for or against shouldn't look to the criminal process for any answers or resolution to that."

The legal papers filed in the Libby case underscore that it was Cheney's office, not Rove's political empire, that was the center of the cabal to discredit whistle-blower Joe Wilson and his wife, Valerie Plame. Fitzgerald has already produced a copy of Wilson's July 2003 New York Times article (the one that rebutted Bush and Cheney's claims that Iraq tried to obtain African uranium) annotated by the vice president. Cheney even scrawled the provocative question, invoking Plame's soon-to-be-blown CIA cover, "Did his wife send him on a junket?"

Whatever we learn from Fitzgerald's inquiries into how the Bush administration conducted its war games will come out during the Libby trial. When it came to concocting a rationale to go to war with Iraq, Rove, despite his top-secret clearance, appears to have been a bit player compared to Cheney and Libby, his loyal henchman.

Preparing for a possible Rove indictment, I had been asking Democratic strategists over the past month which would be better for the party's political fortunes in November -- criminal charges against the man known as "Bush's brain" or gasoline at $4 a gallon? The standard answer was that gas prices (even at their current levels) would have a far greater influence on the voters than mug shots of Rove.

A few Democrats theorized that criminal prosecution of Rove might strengthen the "culture of corruption" argument that was once central to efforts to win back the House. But as the recent special election in California showed (where Democrats could not even win the House seat of a Republican who went to prison for bribery) the ethics issue is not an automatic vote-getter. Moreover, Rove is a bit like defrocked House leader Tom DeLay -- revered by Republicans, reviled by Democrats and largely unknown to swing voters.

Moreover, the notion may be heresy in political circles, but there are recent indications that Rove may not be the greatest political chess player since Metternich remade the map of Europe after the Napoleonic wars.

Rove was not exactly doing hard time on a federal rock pile when Bush's popularity plunged to around 35 percent. It was Rove's handiwork to make Social Security privatization the signature issue of Bush's second term. The disastrous fate of that political gambit, combined with the Iraq war, turned Bush into a lame-duck president before his time. As a political strategist, Rove runs the gamut of issues from A (national security) to B (tax cuts). Six years into his tenure in the White House, Rove may be running on empty, just like the president whom he serves.

Fitzgerald, by not indicting Rove, may have saved the Democrats from getting too caught up in the politics of vengeance. There was always an analogy to Madame Defarge sitting by the guillotine knitting in the way that Bush haters reveled in every unreliable rumor about a Rove indictment.

Vendettas may be emotionally satisfying, but they rarely provide a formula for winning elections. In fact, the best way to get back at Rove is not through criminal prosecution but by forcing him to read an Election Night speech conceding that the Democrats have won back Congress.