We've gone from badasses Lou Reed and James Caan to jackasses Adam Sandler and Ben Stiller. Where are the hip male Jews? 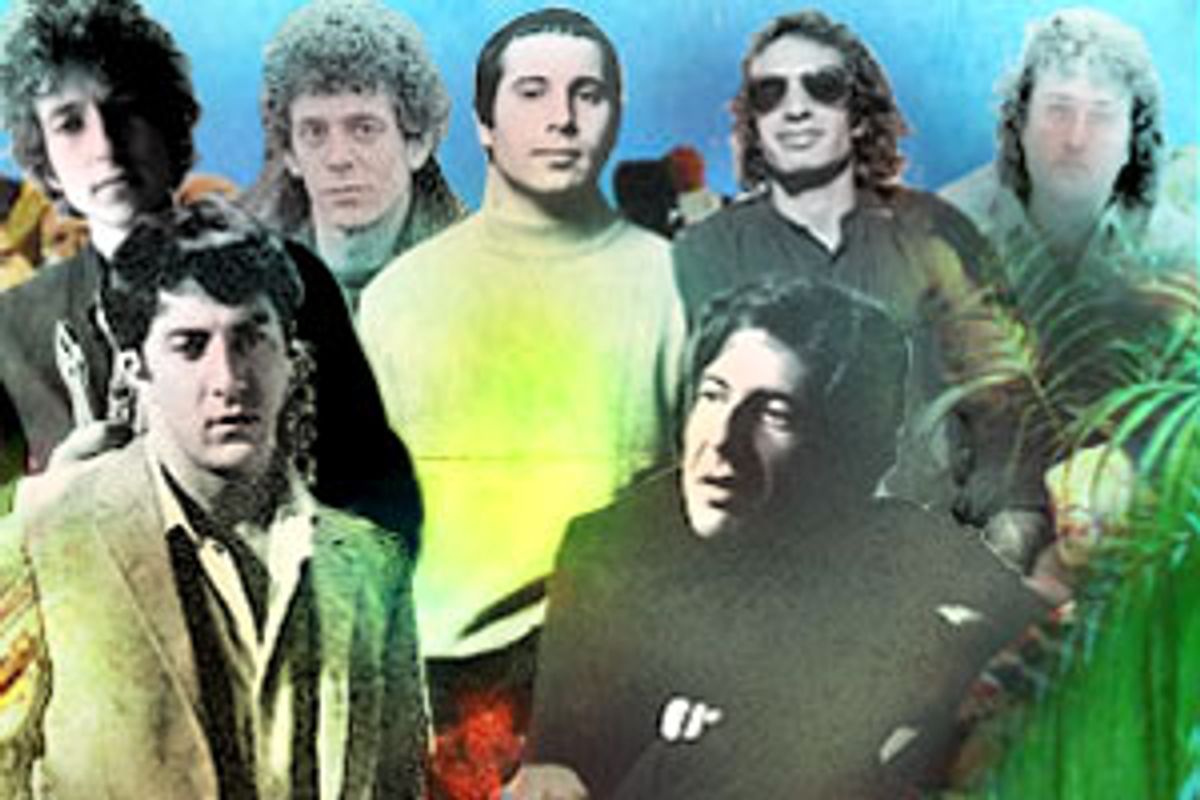 Leonard Cohen is a Jew. But he's not just any Jew: He's dark, mysterious, unabashedly prurient and eternally hip. This is a troubling prospect. Not because of what it says about Cohen himself, but rather because of what's been left in his wake. Which is nothing. My interest in Leonard Cohen's music was rekindled by "I'm Your Man," a documentary and concert film that further entrenches the poet and songwriter's status as one of the coolest dudes around. After reacquainting myself with a body of work that includes darkly beautiful and richly evocative classics like "Hallelujah," "Bird on a Wire," "First We Take Manhattan" and "Famous Blue Raincoat," I began to wonder where I could find some contemporary examples of Jew-man coolness. I didn't know where to turn. Looking for poets, I found only pishers. Shmendriks abound, sex symbols are few and far between. Where have all the cool Jews gone?

Things used to be different. The late '60s through to the late '70s -- a time frame roughly coincident with the era of Cohen's greatest visibility -- is looking more and more like a golden age of Jewish male celebrity (disclaimer: Jewish is defined here as having at least one Jewish parent): Bob Dylan, Lou Reed, Neil Diamond, Billy Joel, Paul Simon, Kiss' Paul Stanley and Gene Simmons, Donald Fagen from Steely Dan, Randy Newman, Michael Douglas, Richard Dreyfuss, Dustin Hoffman. Starsky. Spock. Don't forget converts like Sammy Davis Jr. -- yes, children, there was a time when an African-American celebrity chose to be Jewish. Crazy, I know. And if nothing connects the aforementioned men other than their Judaism, well, that's kind of the point. It wasn't that long ago when super-successful Jewish celebrities weren't just kvetchers and schlemiels; they were rock 'n' roll heroes and sensitive singer-songwriters, tough guys and gangsters, song and dance men and slapstick artists. James Caan played badasses. Adam Sandler plays jackasses. Larry David and Jerry Seinfeld? Self-absorbed jerks. David Blaine? What's going on?

Money, for one thing. The old vaudevillian stereotype works as a business model. "It's a kind of shorthand," says Rich Cohen, the author of "Tough Jews: Fathers, Sons, and Gangster Dreams" and the new "Sweet and Low: A Family Story." "Stereotypes are so much easier for the people who make this stuff." Ben Stiller, Sandler and Seinfeld have made millions playing the fool, thus, there's no incentive to change.

Cohen is careful to point out that today's Jewish star finds himself in a time radically different from the one Hoffman, Caan and Dreyfuss came up in. "Films in the '70s were a little more complicated," says Cohen, pointing out that the studios allowed upstart filmmakers like Martin Scorsese to make pictures with unconventional leading men. The Vietnam War was also an important cultural arbiter. "People were seeing that certain American paradigms were bullshit and that allowed different types of people to come along."

With the old heroes looking more and more like anachronisms, the popular audience opened up to non-traditional leading men. "It wasn't just that Hoffman was Jewish," says Cohen, "but people like him and Pacino were little guys -- especially compared to Gary Cooper and Burt Lancaster." Actors who might have earlier been relegated to supporting or comic roles all of sudden found themselves in a position where they could become stars. Now, it seems like the culture has backslid. As Cohen asks, "If Dustin Hoffman came along today, would he be David Schwimmer?"

It's not that the standards of celebrity male Judaism should be set by cartoonish and often misogynist knuckle-draggers like Kiss or David Lee Roth; even Leonard Cohen himself is a problematic figure (the women in his songs and literature are little more than mere objects of desire; rarely do they seem like actual people), but it's a bad sign when the last time a Jewish actor played a no-holds-barred badass, Adam Goldberg in 2003's "The Hebrew Hammer," it was in a film based entirely on the premise that a Jewish superhero is high comedy. There should be enough cultural room for Jewish men to play the kinds of roles that used to be played by Dustin Hoffman and James Caan. There's no reason the next Woody Allen and the next Leonard Cohen shouldn't share a guest spot on "The Daily Show." But for now, we're mostly stuck with the status quo: Jewish funnymen. A role they've been playing since vaudeville -- and one that even gets transposed to cartoon animals.

Watching the animated film "Madagascar" with his son, Richard Cohen noticed something funny about one of the characters -- a giraffe named Melman. "David Schwimmer did its voice, it was neurotic, scared to be outdoors -- Jewish. And this was an animal!"

It's time for a change. What we need is the re-emergence of a famous Jewish man who is by turns suave, sophisticated, sexy and tough to pin down. There are actors out there with the potential to take on this role, but so far no one has stepped up to the plate. We need a dude you might laugh with, but would never think to laugh at. Someone unafraid to just be in the world and not lapse into schlubbiness. We need someone like this, and we need him bad, because right now the closest we've got is Leonard Cohen and he's a septuagenarian Buddhist monk. Oy.

(Never fear, help may be around the corner: See our list of the 10 most likely to stand up for the tribe.)