As the Mideast burns and North Korea threatens, the once-boastful president has no policy and is reduced to pathetic bleats. 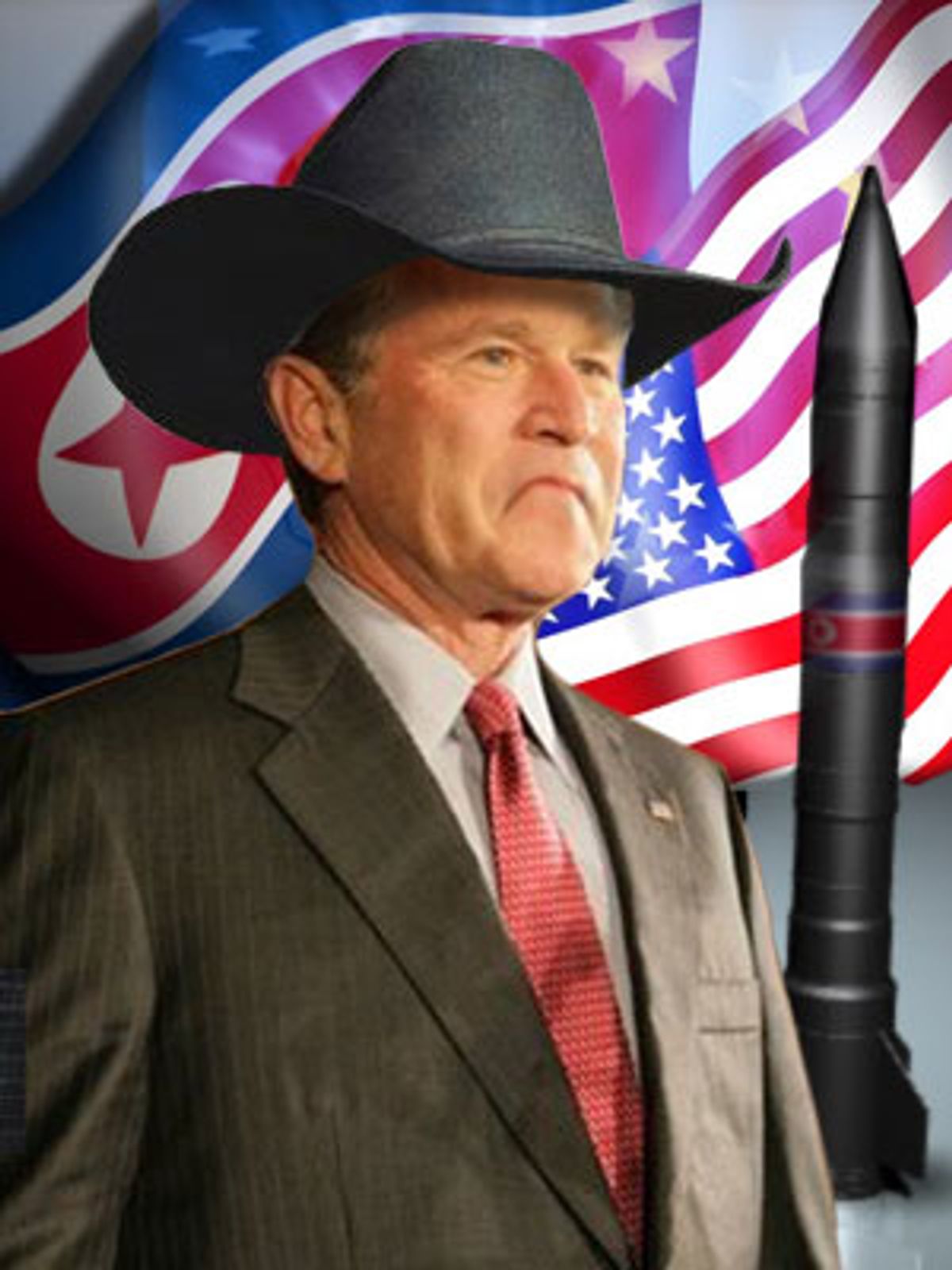 President Bush was against diplomacy before he was for it. But with the collapse of U.S. foreign policy across the board, he has discarded talk of preemptive strikes and reluctantly claimed to have become a born-again realist. "And it's, kind of -- you know, it's kind of painful in a way for some to watch, because it takes a while to get people on the same page," he said at his July 7 press conference, adding, in an astonished tone, "Not everybody thinks the exact same way we think. Different words mean different things to different people."

Just two years ago, he appeared before the Republican Convention boasting of his "swagger, which in Texas is called walking." But in the face of the consequences of his failures, he has not adopted a new doctrine so much as swaggered into a corner. The cowboy's White House has become Fort Apache.

His policy is paralyzed toward North Korea, reduced to kowtowing to China in the forlorn hope it would implore the hermit kingdom to forswear developing nuclear weapons and firing test missiles. The Chinese, however, have declared they will veto any U.S.-initiated sanctions in the United Nations Security Council.

When Bush was president-elect, Bill Clinton's national security team informed him that a treaty with North Korea was essentially wrapped up. Incoming Secretary of State Colin Powell was enthusiastic. As president, Bush not only cut off diplomacy but also humiliated Powell and then South Korean President Kim Dae-Jung for seeking to continue the process associated with Clinton. In Bush's vacuum -- a series of empty threats -- North Korea predictably reacted with outrageous violations intended to capture U.S. attention. The U.S. negotiator, Charles "Jack" Pritchard, was constantly subverted by then Undersecretary of State John Bolton (Vice President Cheney's State Department mole). Quitting in 2003, Pritchard said, "I asked myself, 'What am I doing in government?'"

Bush sent a new negotiator to the six-party talks in 2004 but prohibited him from meaningful negotiation. Like clockwork, the North Koreans responded with extreme gestures, and Bush has answered that he will not speak to them directly. "By not talking with North Korea," Pritchard wrote last month in the Washington Post, "we are failing to address missiles, human rights, illegal activities, conventional forces, weapons of mass destruction, terrorism and anything else that matters to the American people. Isn't it about time we actually tried to solve the problem rather than let it fester until we blow it up?"

On Israel's reoccupation of Gaza in response to Hamas' terrorism, Bush has regressed to embracing no policy, just as he did when he first entered office. In the light of Bush's failure to give Palestinian President Mahmoud Abbas any tangible gains to show his electorate, Hamas' victory was foretold. Now the withdrawal of the United States from any peace process is yielding a predictable downward spiral of mutual recrimination in the region.

Similarly, less than a month after the celebrated Camp David sleepover of senior administration officials, ostensibly to bring new clarity to Iraq policy, Bush has returned to mouthing inane platitudes about "victory." The killing of Abu Musab al-Zarqawi, touted as a turning point, has proved to have had little impact. (Intelligence estimates put foreign fighters at between 4 and 10 percent of the insurgency.) Bush promises a military "defeat" of the enemy while ignoring his generals' admonition that a political solution is critical as Iraq descends into sectarian civil war.

What the president doesn't know and when he didn't know it remain pertinent. In January 2003, on the eve of the invasion of Iraq, Bush met with three prominent Iraqi dissidents, who, in discussing scenarios of post-Saddam Hussein Iraq, "talked about Sunnis and Shiites. It became apparent to them that the president was unfamiliar with these terms." Peter Galbraith, the former U.S. ambassador to Croatia and involved in Iraqi diplomacy as a Senate aide for decades, carefully sources this anecdote in his new book, "The End of Iraq: How American Incompetence Created a War Without End," in order to illustrate the "culture of arrogance" that imagined Iraq "was a blank slate on which the United States could impose its vision of a pluralistic democratic society."

But as the North Korea debacle shows, Bush's ruinous approach began before the Iraq invasion, indeed before Sept. 11. His latest policies, or pantomimes of policies, recall Gertrude Stein's description of Oakland, Calif.: "The trouble with Oakland is that when you get there, there is no there there."