The most important congressional elections in over a decade are fast approaching. Here's our guide to the 10 races to watch as the Democrats fight to take back Congress. 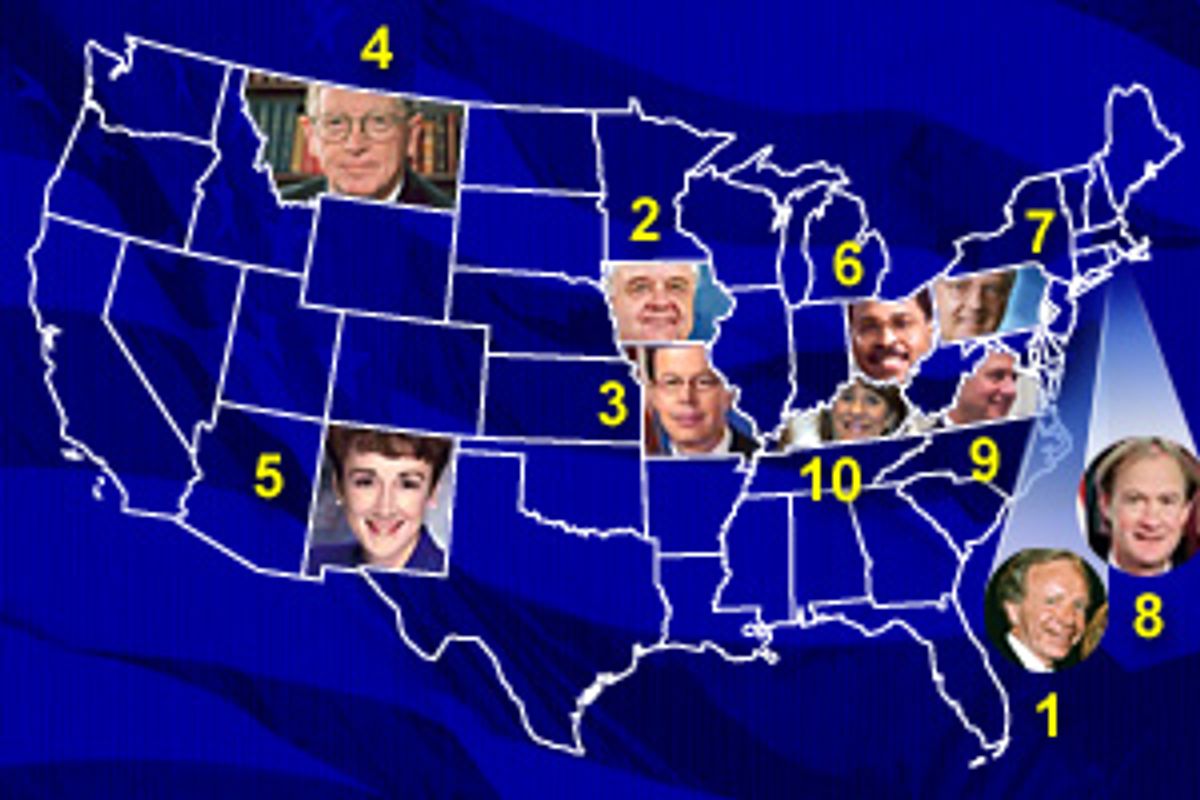 Beware any armchair pundit or talking head who confidently rattles off the precise Senate seats that will change party in November or the number of House seats the Democrats will pick up. There are things in life that are simply unknowable this far in advance, despite the demands of TV producers and desperate-for-certainty campaign junkies. And the final outcome of Election 2006 and the big question of whether the Democrats will win at least one chamber of Congress rank right up there as a great conundrum.

The underlying problem is largely logistics. If you count small-state gubernatorial battles (such as Republican Frank Murkowski's uphill reelection bid in Alaska), there are well over 100 seriously contested races that will dictate the shape of Congress and national politics in the final two years of the Bush presidency. No news organization can begin to cover the intricacies of all these contests on the ground. Instead, both the media and the political community try to keep track by slavishly following the polls, donning green eye shades to tote up the money and trying to divine national trends that will theoretically overwhelm local factors.

While Salon has humbler resources than TV networks or great daily newspapers, we are animated by an abiding belief in the need for on-the-scene reporting and the value of political journalism that reflects reality rather than heart-on-your-sleeve hopes. As a result, we have decided that the best way to cover the most important congressional elections in more than a decade is to shrewdly pick our shots -- focusing our energies on political contests that are emblematic, intriguing and, yes, important.

So we are unveiling what we call Salon's "Great Races." These are the campaigns that we pledge to write about from ground level at least once and, in many cases, revisit between now and November. This list is not a rigid manifesto. There are other campaigns we also plan to cover if the fireworks are too irresistible to miss (social conservative Republican Rick Santorum's desperate bid to hold his Pennsylvania Senate seat in the face of daunting polls), the political symbolism is too potent (GOP anti-environmental scourge Richard Pombo's House reelection battle in California's Central Valley) or the fun quotient is simply too high (Katherine Harris' comically inept Senate run in Florida). We should add the fine-print proviso that other aspects of Election 2006 may also prove g-r-r-r-eat, if the political landscape suddenly shifts.

But like a candidate distilling a library of position papers into a few 30-second commercials, the following campaigns represent our statement of priorities. Our list is partly shaped by the belief that while high-visibility statewide races for the Senate and governor dominate the headlines, the central story line in November will be whether the Democrats corral the 15 seats they need to win the House. So without further ado -- drum roll, please -- here, in alphabetical order by state, are Salon's officially designated Great Races.

Connecticut Senate Primary
Incumbent Joe Lieberman vs. Ned Lamont, the grudge match of the season on Aug. 8. What started as a quixotic challenge by mega-rich cable TV entrepreneur Lamont to Lieberman's unapologetically hawkish stance on Iraq and his bipartisan ways in the Senate has escalated into a titanic clash of ideologies that calls into question the right of Al Gore's 2000 running mate to call himself a Democrat. With Lamont surging, Lieberman is preparing to run as an independent if he loses the low-turnout primary, which means that the fratricidal contest could run through November. Reliably blue-state Connecticut is also center stage for Democratic hopes of winning the House, since all three GOP incumbents in the state are in tight races. Our canary-in-the-mine-shaft race here is the generational battle in the 5th District in the northwest corner of the state between 71-year-old GOP incumbent Nancy Johnson and 32-year-old Chris Murphy, a state senator.

Iowa House Battles
This is a state where judges draw congressional district lines and, as a result, House races tend to be competitive. One of the most up-for-grabs seats in the nation is the open GOP-held seat in the 1st District along the Mississippi River. Leonard Boswell in Des Moines, who always faces a daunting reelection fight in a district that split 50-50 in the 2004 presidential race, was dubbed by the National Journal as the Democratic Party's "most vulnerable incumbent." Adding to the spectacle is Iowa's clout as the first 2008 caucus state. This means that every presidential contender (Hillary Clinton aside) will concoct excuses to campaign for these embattled House candidates, while selflessly picking up some early race-to-the-White-House supporters along the way.

Missouri Senate Race
Not only does state auditor Claire McCaskill's ahead-in-the-polls challenge to lackluster GOP one-term incumbent Jim Talent represent one of the most promising chances for the Democrats to pick up a Senate seat, but the contest promises an early test of an emerging issue. Missouri has become the "Show Me the Stem-Cell Research" state with an amendment to its Constitution on the November ballot that would encourage these cutting-edge medical inquiries. Not surprisingly, Talent, whose political base lies with rural social conservatives, strongly opposes the amendment, while McCaskill supports it.

Montana Senate Race
This campaign is potentially "Lucy in the Big Sky with Diamonds" for Democrats. Start with three-term GOP incumbent Conrad Burns -- the largest Senate recipient of campaign cash from guilty-pleading lobbyist Jack Abramoff and his cronies -- whose job performance is given a thumbs down by 60 percent of the voters in one poll. Throw in an aggressive Democratic challenger, state Senate president Jon Tester, who was strongly backed by Netroots activists as he romped home in last month's Democratic primary. Tester is a Democrat willing to move to his right as well as his left -- joining Burns in lambasting amnesty for illegal aliens in their opening-gun debate.

New Mexico House Race
See adjoining story for more on the struggle between four-term GOP incumbent Heather Wilson and challenger Patricia Madrid, the state attorney general, that has the potential of turning into a referendum on the Iraq war.

Ohio Valley House Races
The route from Columbus, Ohio, to Louisville, Ky., is a southwesterly 200-mile slash that cuts through Cincinnati. Each of these cities is represented by a vulnerable House Republican (Deborah Pryce in Columbus, Steve Chabot in Cincinnati, and Anne Northup in Louisville) and in each of these urban districts John Kerry ran roughly even with Bush in 2004. If the Democrats are going to pick up the 15 seats needed to elect Nancy Pelosi as speaker, these are the districts that the out-of-power party must win for the overall arithmetic to work out. But Northup and Chabot, in particular, are skilled campaigners who know what it takes to hang on in difficult years. Continuing to drive southwest from Louisville brings you immediately into Kentucky's small-town 2nd District where GOP incumbent Ron Lewis -- a Baptist minister and fallen-away term-limits advocate who floated in on the Newt Gingrich tide in 1994 -- is suddenly facing a strong challenge from state Rep. Mike Weaver.

Ohio Gubernatorial Race
There are those on the West Coast fascinated by the political saga of Arnold Schwarzenegger and Easterners intrigued by the indomitable march of Wall Street-slaying New York Attorney General Eliot Spitzer toward the governor's mansion, but the statehouse race that combines drama with just a whiff of vengeance is in the political crucible of Ohio. Militantly conservative Ken Blackwell, the aggressively partisan secretary of state who worked overtime to disenfranchise Democratic voters during the 2004 presidential race, is now running hard to become the nation's first African-American Republican governor in modern times. This time around Blackwell is up to his old electoral tricks issuing a recent ruling banning voter-registration groups from submitting new-voter forms in bulk. Democrat Ted Strickland, a five-term congressman, leads in the polls, but Blackwell cannot be counted out until the last vote is tallied by ... er ... Blackwell's office.

Pennsylvania House Race
Call it "The Revenge of the Blue States." Congressional Quarterly identifies 10 Republican-held seats in play in just two states: New York and Pennsylvania. Throw in the three at-risk GOP incumbents in Connecticut plus vulnerable Republican congressmen in New Jersey and New Hampshire -- and, in theory, the Democrats could assemble a House majority based just on turnovers in the Northeast. Which brings us to Curt Weldon, the hawkish 10-term Republican, obsessed with finding Iraq's elusive weapons of mass destruction, who is an odd match with the affluent Philadelphia suburbs (Delaware County) he represents. As Ken Mehlman, the Republican national chairman, put it in an interview last week, "What has always been a conundrum for guys like me who are running presidential campaigns is that we don't win in the Philly suburbs in recent elections, yet they vote Republican for Congress and they vote Republican in local legislative elections." Weldon's reelection fight against Joe Sestak -- a retired admiral who raised more money in the second quarter than the incumbent -- will be a prime test of these vestigial GOP suburban loyalties.

Rhode Island Senate Primary
What do you call a pro-choice, pro-environment Republican senator who voted against the Iraq war and opposed the Bush tax cuts? An endangered anachronism. Lincoln Chafee, who inherited the seat after his father (John Chafee) died in 1999, is among the last true Republican moderates in big-time national politics. Small wonder that Chafee is facing a spirited conservative challenge in the Sept. 12 GOP primary from Cranston Mayor Steve Laffey. What gives this contest a crazy-quilt flavor is that the national Republican establishment, from Mehlman on down, is enthusiastically backing Chafee in the primary. The reason: Chafee, if renominated, has an even chance of holding the seat for the Republicans against Sheldon Whitehouse, while right-winger Laffey would be whomped in a state where no Republican presidential candidate has cracked 40 percent of the vote since Ronald Reagan in 1984.

Virginia Senate Race
While other 2008 presidential contenders are on the ballot this fall (Hillary Clinton in New York and Bill Richardson making an easy bid for a second term as New Mexico's governor), Republican George Allen is the only White House dreamer nervously watching his home-state poll numbers. "I believe if George Bush were popular, they would pick George Allen in 2008 because he is George Bush Redux," said Sen. Chuck Schumer at a Wednesday breakfast sponsored by the American Prospect. But Schumer, who heads the Democratic Senate Campaign Committee, added, "I'm very glad we're giving George Allen a very nice run for his money in Virginia." The Democratic runner and Netroots favorite is James Webb, once Ronald Reagan's secretary of the Navy, who bolted the GOP in opposition to the Iraq war. Webb is underfunded and still a work in progress as a campaigner (especially compared to the affable Allen), but Virginia, though a traditional conservative bastion, is rapidly transforming itself into a swing state because of a Democratic and demographic surge in the Washington suburbs.