Condi Rice and Co. are using the conflict in Lebanon as a proxy war with Iran that will somehow rescue the U.S. from failure in Iraq. 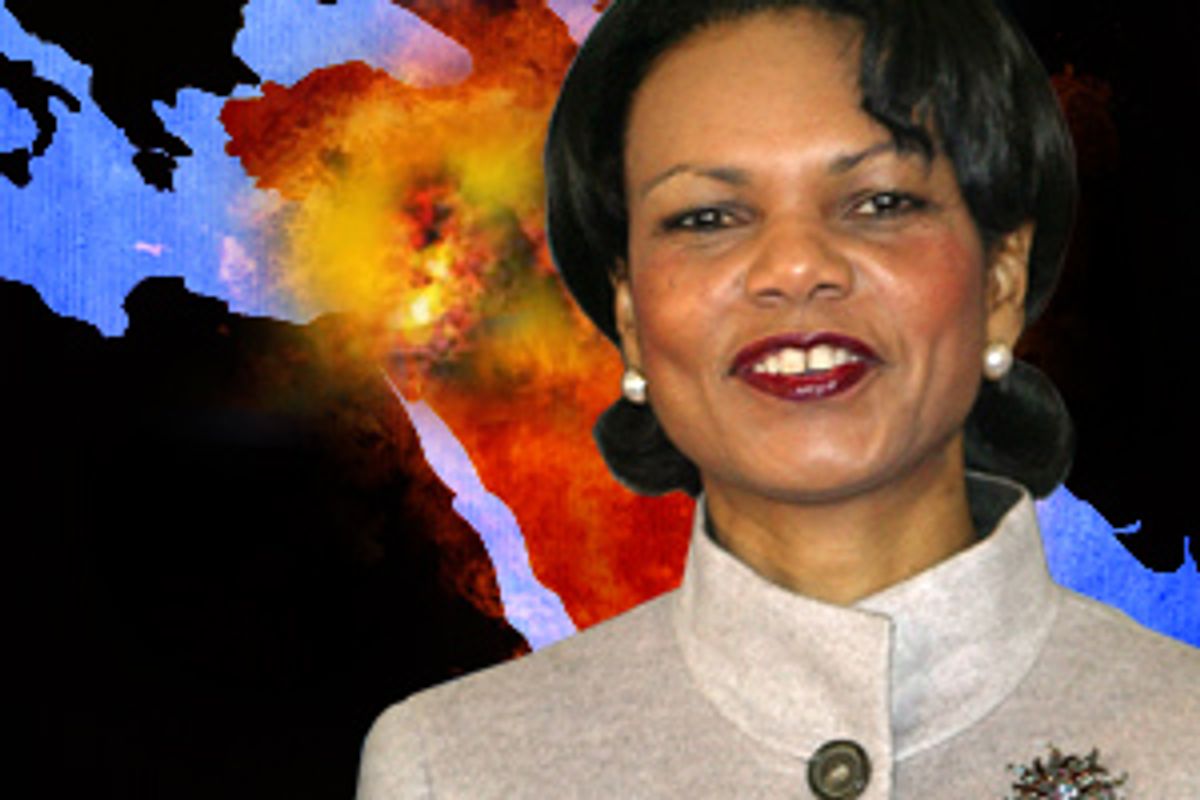 Once again the Bush administration is floating on a wave of euphoria. Israel's offensive against Hezbollah in Lebanon has liberated anew the utopian strain of neoconservatism that had been traduced by the Iraqi sectarian civil war. And Secretary of State Condoleezza Rice has propelled herself forward as chief cheerleader. "What we're seeing here," she said, "are the birth pangs of a new Middle East." At every press conference she repeats the phrase "a new Middle East" as though its incantation were magical. Her jaunt to the region is intended to lend the appearance of diplomacy in order to forestall it.

In Rome Wednesday, a proposal by European and Arab nations for an immediate cease-fire in Lebanon was scuttled by U.S. opposition. As explained to me by several senior State Department officials, Rice is entranced by a new "domino" theory: Israel's attacks will demolish Hezbollah; the Lebanese will blame Hezbollah and destroy its influence; and the backlash will extend to the Palestinians' Hamas, which will collapse. From the administration's point of view, the Israel-Lebanon conflict is a proxy war with Iran (and Syria) that will inexplicably help turn around Iraq. "We will prevail," Rice says nearly as often as she refers to a "new Middle East."

The Bush administration has traditionally engaged in promiscuous threat conflation -- al-Qaida with Saddam Hussein, North Korea and Iran in "the axis of evil," and now inferentially the Shiite Hezbollah with the Sunni Iraqi insurgency. By asserting "we" before "will prevail" Rice is engaging in national-interest conflation. According to the Rice doctrine, the United States has now deserted its historical role as ultimate guarantor of Israel's security by acting as the honest broker among all parties. Rather than emphasize the paramount importance of Lebanese sovereignty, presumably a matter of concern to an administration that had made a nation's sovereignty Exhibit A in the spread of democracy in a "new Middle East," Rice has downplayed or ignored it in favor of an uncritical endorsement of Israel's offensive against Hezbollah, which has destroyed much of Lebanon's infrastructure, made refugees of about 20 percent of the Lebanese, and treated the Lebanese government as a contemptible irrelevance. Rice's trip was calculated to interpose the influence of the United States to prevent a cease-fire and to give Israel at least another week of unimpeded military action.

To the Bush administration the conflagration has appeared as a deus ex machina to rescue it from the Iraq quagmire. That this is patently absurd does not dawn on those who remain in thrall to the same pattern of thought that imagined the invaders of Iraq would be greeted with flowers in the streets of Baghdad. Denial is the basis of repetition. New and irrefutable revelations of the administration's disastrous consequences are brushed off like lint.

This week has also seen the publication of "Fiasco: The American Military Adventure in Iraq," by Thomas E. Ricks, the military correspondent of the Washington Post, a book devastating in its factual deconstruction. The Iraqi invasion, he writes, was "based on perhaps the worst war plan in American history." The policy making at the Pentagon was a "black hole," with the Army adamantly opposed to "the optimism," and resistance by the staff of the Joint Chiefs of Staff to disinformation linking Iraq to Sept. 11 dismissed. ("How the hell did a war on Iraq become part of the war on terrorism?" demanded one officer summarizing the general reaction of the Joint Chiefs' staff.) Orders that "smacked of politicized military leadership" suppressed internal debate; commanders who raised questions were cashiered. After the absence of a plan for postwar Iraq, blunder upon blunder fostered the insurgency. These errors combined with "ignorance of long-held precepts of counter-insurgency warfare," leading to a "descent into abuse" and torture.

In one of its unintentionally ironic curiosities, the Bush White House has created an Office of Lessons Learned, complete with director and deputies. But the thinking that made possible the catastrophe in Iraq is not a subject of this office. Instead the delusional mind-set went underground only to surface through the crack of the current crisis. There have been no lessons learned about the blowback from Iraq -- about Iraq's condemnation of Israel and its sympathy for Hezbollah -- or about the United States' unwillingness to deal with the Palestinian Authority that made inevitable the rise of Hamas, or about the counterproductive repudiation of direct contact with Syria and Iran.

Indeed, Rice's "new Middle East" doctrine is one in which the United States is distrusted and even hated by traditional Arab allies, and the U.S. ability to restrain Israel while negotiating on behalf of its security has been relinquished and diminished. Since Rice became secretary of state she has been in search of what she has called "transformational diplomacy." At last, she has discovered the transformation by abandoning the diplomacy.