Returned to face the Senate that failed to confirm him the first time, U.N. ambassador John Bolton could barely contain his contempt. 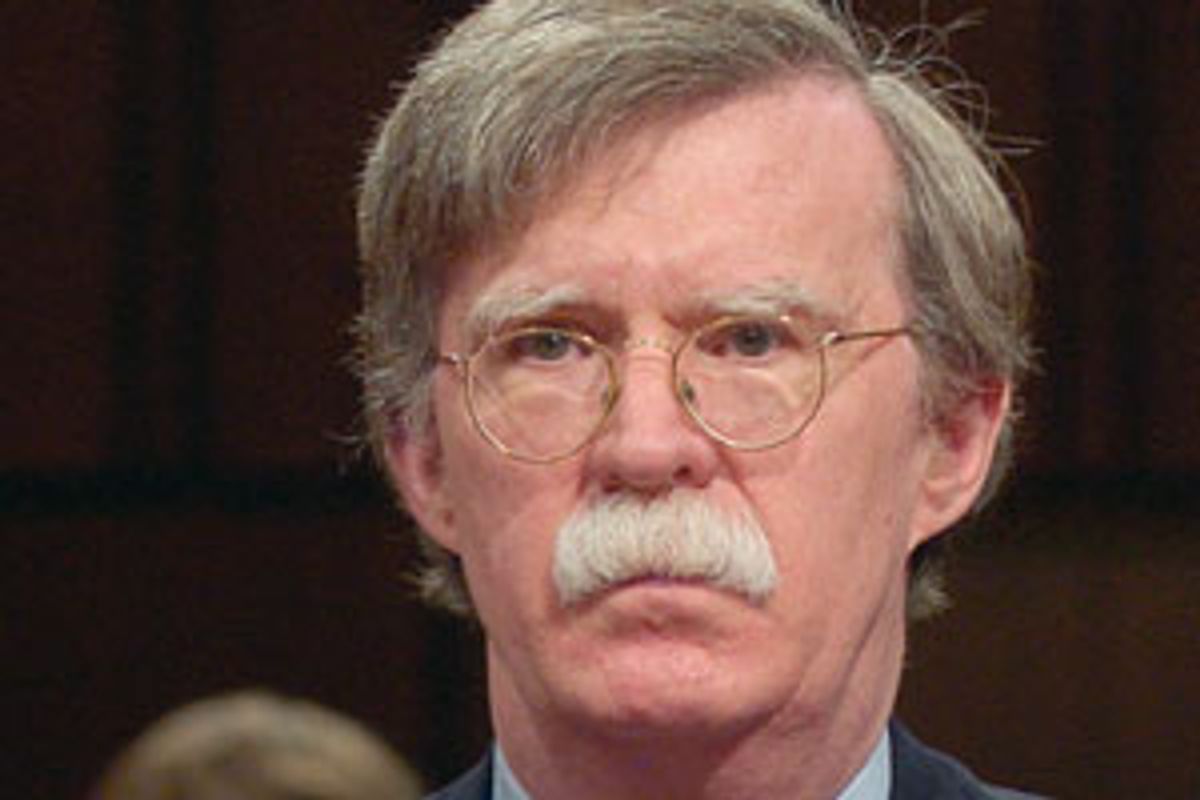 After a year as U.S. ambassador to the United Nations, John Bolton has still not gone to get a decent haircut. He showed up Thursday at the Senate Foreign Relations Committee looking as shabby as the last time he testified, with an unruly cushion of graying locks flopped across his forehead and bunched over the nape of his neck. Combined with a walrus mustache and glasses that kept falling down his nose, he looked like "The Muppet Show's" Swedish Chef applying for a job in the Foreign Service.

Typically, fashion and grooming are not grounds for criticism in politics. If they were, then dozens of leaders -- from Dennis Hastert to Dennis Kucinich -- would never have made it to Washington. But with Bolton, it is different: His style is a major part of his act. As a diplomat, his disregard of fashion comes across as studied and intentional, not accidental. "His hair was so poorly cut, it bordered on rude," a Washington Post critic opined of his last appearance before the committee. There is little doubt that Bolton enjoyed that description, since he prides himself on an ability to offend with blunt talk and brute force. His mop is a social statement, à la the long hair of 1960s rebels. "I don't care what you elites think," it seems to say, "because I am right and you are wrong."

That insolent aura was on full display Thursday, when Bolton submitted to questioning in the hopes of finally being confirmed to the job he now holds through a temporary presidential appointment. His body language exhibited nothing but scorn for the Democrats who quizzed him about Lebanon, Iran, North Korea and the United Nations. When Delaware's Joseph Biden asked him a question, Bolton twirled a pen in his hands, like a schoolchild waiting for the recess bell. When Connecticut's Christopher Dodd spoke, Bolton shuffled his papers and shook his head. By the time Wisconsin's Russ Feingold got around to asking questions, Bolton was doodling on a notepad, drawing and redrawing the corners of a rectangle. Moments later, the nominee leaned back in his chair and began to drum his fingers on the table.

Nonetheless, the Democrats, who have predicted a "bruising fight" over the nomination, repeatedly declared that they did not want to focus on Bolton's offensive style, but his performance as ambassador. "My objection is not that he is a bully, but that he is an ineffective bully," Dodd said in his opening statement. "He can't win the game when it really counts." Similarly, Biden introduced himself to the nominee by saying, "My concerns continue to relate to substance and not style, Mr. Ambassador."

But that distinction largely misses the point of Bolton's tenure at the United Nations. He was chosen by the Bush administration to offend the mores and upset the structure of the institution he once described as a rightful lapdog of the United States -- "The United States makes the U.N. work when it wants to work." He once famously said the U.N.'s New York headquarters could lose 10 floors without disruption. More than 30 of Bolton's fellow ambassadors recently complained to the New York Times about his confrontational tactics and his flouting of diplomatic conventions. They did not criticize his policies as much as the arrogance of his ways. "He's lost me as an ally now," confided one ambassador, who was identified as having close ties to the Bush administration.

Last year, this reputation was enough to block Bolton's nomination. George Voinovich, an Ohio Republican, joined Democrats in opposing Bolton for his behavior as the State Department official in charge of arms control. Lawrence Wilkerson, who served as chief of staff to former Secretary of State Colin Powell, said Bolton would be an "abysmal ambassador." Voinovich, in turn, called Bolton a "poster child of what someone in the diplomatic corps should not be."

But with the 2006 elections approaching and the Middle East unraveling in violence, the White House has resubmitted his nomination, betting that they can finally break a Democratic filibuster with a vote in September. Bolton remains enormously popular among conservative voters, a fact that could excite turnout in November by again framing the national security debate around Republican strength and Democratic softness. "This will certainly energize conservatives as an issue," explained Niles Gardiner, a scholar at the conservative Heritage Foundation. "Clearly the White House is feeling bullish and confident."

In the current environment, Bolton has also excited the powerful pro-Israel lobby, a major source of support among Democrats as well as Republicans. The American Israel Public Affairs Committee recently released a statement calling Bolton "a very effective representative of the United States." Opponents of Bolton, meanwhile, predict a much more difficult fight this time around. Steve Clemons, a scholar at the New American Foundation who is helping to organize the opposition to Bolton, thinks it will be tough for Democrats to hang together and block him again. They can only do so via filibuster, says Clemons, and "at the end of the day, people don't want [to filibuster] because they feel it will put them in a weaker position in [the elections]."

Perhaps the biggest boost for Bolton comes from Voinovich, his most symbolic opponent, who has changed his mind. In a recent Op-Ed in the Washington Post, Voinovich said he now believes that national security demands that Bolton remain at the United Nations after his temporary appointment expires in January. "I cannot imagine a worse message to send to the terrorists," Voinovich wrote, parroting the most manipulative GOP talking points, "than to drag out a possible renomination process." In this formulation, senators must choose between supporting Bolton or supporting the terrorists. Sen. Harry Reid of Nevada, the Democratic leader, has not yet committed to supporting another filibuster, though he told reporters he continues to have "serious concerns."

At the Thursday hearing, Bolton's wife, Gretchen, followed her husband's lead by emanating disrespect for her husband's critics. Sitting just behind him, she wore sunglasses for much of the hearing, in an apparent response to the room's lighting. When Democratic Sen. John Kerry of Massachusetts began to speak, she started doodling a large "X" on a piece of paper, while muffling scornful chuckles that appeared to emphasize her opinion of the one-time presidential candidate.

For about 10 minutes, Bolton and Kerry argued over the best diplomatic approach to North Korea, but Bolton gave no ground, treating Kerry like a teacher treats a pupil who has not done his homework. Kerry finally appeared to give up. "We're not going to resolve it here," Kerry said, exasperated.

By then, the substance of the hearing had further given way to theater. The showers in the Senate staff gymnasium, located above the hearing room, had begun to send torrents of water leaking through the ceiling and down onto the carpeted floor. "This is a form of transparency," Bolton joked. "Let's hope it's rainwater and not something else," cracked Sen. Bill Nelson, the Florida Democrat.

No similar joke could be offered in Bolton's defense. For years he has been causing trouble with his aggressive style and committed aversion to international law or compromise. When it comes to Bolton, what you see is what you get.