Will Bush and Gonzales get away with it?

The pilot and Vietnam POW -- a staunch Republican -- who pushed through the War Crimes Act of 1996 is appalled that the Bush administration, facing possible prosecution for war crimes, is devising a legal escape hatch. 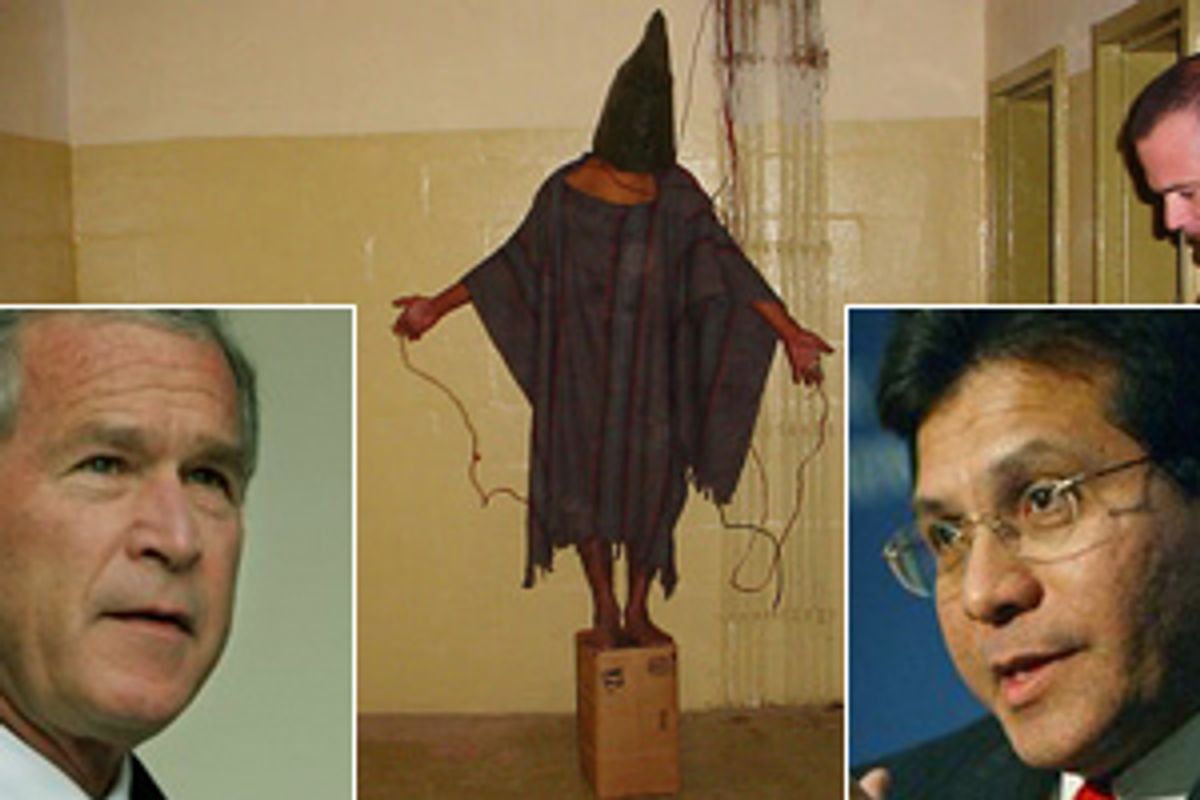 Retired Navy pilot Mike Cronin knows enough about torture to know it doesn't work. After being shot down over North Vietnam in 1967, he spent six years enduring interrogations in the Hanoi Hilton, the notorious holding block for American prisoners of war. His neck and ankles were bound together with rope, causing him to lose consciousness. The nerves and bones in his wrists were crushed. His shoulder was ripped out of its socket. He was forced to talk, but he never gave the North Vietnamese the information they wanted.

"I told lies," explained Cronin, 65, in a telephone interview from Cape Cod, Mass., where he is spending the summer. "When you put people in that position, the information you get is not reliable."

After the war ended, Cronin returned home to become a commercial pilot for American Airlines -- and a deep believer in the laws of war. He came to see the Geneva Conventions, which bar torture and "humiliating and degrading treatment," as a bedrock of the international military code. He was amazed to discover that as late as the 1990s, there was no law enabling U.S. courts to try violators of the Geneva Conventions. "I was shocked," he said. "I just thought that was wrong."

So Cronin changed the legal landscape. Thanks to his persistent lobbying, Congress passed the War Crimes Act of 1996 with overwhelming bipartisan support. For the first time, U.S. courts were granted authority to convict any foreigner who commits a war crime against an American, or any American who commits a war crime at all. At the time, nobody could have predicted that a decade later a U.S. administration, with the explicit consent of the president and the attorney general, would be accused of systematic war crimes.

But that is precisely the accusation that President George Bush and Attorney General Alberto Gonzales now face. The Supreme Court recently ruled that the Bush administration wrongly denied Geneva Convention protections to prisoners suspected of ties to al-Qaida and the Taliban, a policy that allowed for harsh and possibly illegal interrogation methods to be used against them. As a result, U.S. personnel, given their treatment of these prisoners, could become subject to prosecution under the law that Cronin, a former prisoner of war, lobbied to pass.

In fact, from the early days of the war on terror, the Bush administration was concerned about the War Crimes Act. Publicly released memos show that as far back as Jan. 25, 2002, Gonzales, then the White House counsel, worried that the president's policies could trigger prosecution under the act. That led the White House to declare, over the objection of the State Department, that al-Qaida was not protected by the conventions. In the memo, Gonzales argued that the president could create "a solid defense against any future prosecution" by declaring that the Geneva Conventions did not apply.

But with the Supreme Court ruling, that defense no longer stands, leaving the administration in a legally vulnerable position. At a recent congressional hearing, Maj. Gen. Jack L. Rives, the Air Force judge advocate, testified that "some techniques that have been authorized" violated the Geneva Conventions. To preempt any prosecution, administration officials are now quietly circulating legislation to change the statutory interpretation of the War Crimes Act of 1996. In short, the legislation would make it difficult to prosecute U.S. personnel for the harsh interrogation methods authorized by President Bush and the Justice Department.

Cronin is not alone. Some Democrats have promised to push back against the proposed changes and have focused their initial ire on Gonzales. "The highest law enforcement officer in the country is leading an effort to undercut the rule of law," said Sen. Patrick Leahy, D-Vt., the ranking member of the Judiciary Committee, on the Senate floor last week. "We cannot credibly ask others to meet standards we are unwilling to meet ourselves." On Wednesday, the committee is scheduled to discuss the issue of war crimes prosecution.

Because the War Crimes Act is a criminal statute that requires a federal prosecutor, it is unlikely that any charges against the American civilian leadership will be filed in the next two years. But charges could be filed by the next administration or by appointment of a special prosecutor, say legal experts.

"What the administration is afraid of is that someday, presumably in a Hillary Clinton administration, Justice Department investigators will go back to 2002 and 2003, when the CIA was interrogating senior leaders of al-Qaida with guidelines from the Justice Department and the White House," said Tom Malinowski, advocacy director of Human Rights Watch. He said the effort to change the interpretation of the War Crimes Act is focused on protecting those outside the military chain of command who may have committed war crimes or ordered war crimes to be committed. "If I were in the armed forces," Malinowski said, "I would be worried that the administration is selling out the armed forces for the CIA."

At first glance, Cronin appears to be an unlikely critic of the Bush administration. He identifies firmly with the military. He served nearly two years in Vietnam, flying A-4 Skyhawks off aircraft carriers over North Vietnam. He was shot down in January 1967, just before the end of his tour of duty. A registered Republican, Cronin voted for President Bush in each of the past two elections. In 2004, he even joined other prisoners of war in supporting Swift Boat Veterans for Truth, the partisan nonprofit group that attacked the Vietnam service and antiwar activities of Democratic candidate John Kerry. One of his closest friends, a fellow American Airlines pilot, was in the plane that crashed into the Pentagon.

But today, Cronin says he is no longer certain he can support Bush. As he put it, "I have had some doubts about the wisdom of this administration."

The story of the War Crimes Act began by accident. In the 1990s, worried that his job as a commercial pilot might not be secure, Cronin enrolled at Georgetown Law School, studying nights while continuing his full-time job as a pilot. At Georgetown, he discovered that Congress had never enacted a law to enforce the Geneva Conventions, even though the conventions were ratified shortly after World War II. After graduating, he was asked by the Allied Pilots Association, his union, to help represent his colleagues on Capitol Hill. He made it a point to lobby members of Congress about the lack of war crimes enforcement as well. "I made it my hobby to discuss the issue with senators and congressmen," Cronin said. "I hit a brick wall. There was no interest until I met Congressman Jones."

In 1995, Rep. Walter Jones was a newly elected Republican from North Carolina who represented a military district that includes Camp Lejeune, a major Marine base. Jones took an immediate interest in Cronin and made the War Crimes Act his first legislative initiative. "This whole issue came to me by accident," Jones said. "It was my third month in Congress."

At the time, war crimes focused on acts by foreign adversaries, like the North Vietnamese, who had tortured Cronin. But when the bill passed into law, it applied equally to Americans. It passed the House by a voice vote, earned unanimous support in the Senate and was promptly signed by President Bill Clinton. Even right-wing conservatives supported it. Sen. Jesse Helms, R-N.C., said the bill would "close a major gap in our federal law." Sen. Jim Inhofe, R-Okla., said the bill was "something that should have been done some 40 years ago."

In practice, the law made little difference for enlisted soldiers and officers, who were already subject to military law, which prohibits the abuse of prisoners. But for the first time, the War Crimes Act provided a way to prosecute U.S. civilians, including intelligence officers, contractors and government officials who order war crimes.

In the current proposals, which have been reported by the Washington Post and the New York Times, the administration is seeking to make Geneva Convention enforcement in the United States subject to domestic interpretation, not international standards. The slight technical change could have a huge practical impact. Legal experts say this would give some flexibility to the Justice Department to define certain interrogation techniques as legal in U.S. courts, even if the rest of the world considers them violations of the conventions.

"They want retroactive immunity," said Mary Ellen O'Connell, a professor of international law at Notre Dame, who has been critical of the Bush administration's detention policies. "Have you known of any other time in our history when we have tried to immunize public officials against crimes after they have committed the crimes?"

The Bush administration, Cronin said, is simply unaware of the realities of war. "The vast majority of them never served a day in the military, even though almost all of them were of military age at the time of the Vietnam War," Cronin said. "The opposition to the administration's policy of detainment has come, to their great credit, entirely from the professional military."

Cronin, on the other hand, has been there. He is a victim of war crimes. And, as it stands, he no longer believes that the president and his aides have the nation's best interests at heart. "From day one," he said, "the total motivation of these people seems to have been, How can we protect ourselves?"