Will the "Pusher" trilogy -- three violent, low-budget films about the mean streets of Copenhagen -- be the next "Sopranos"? 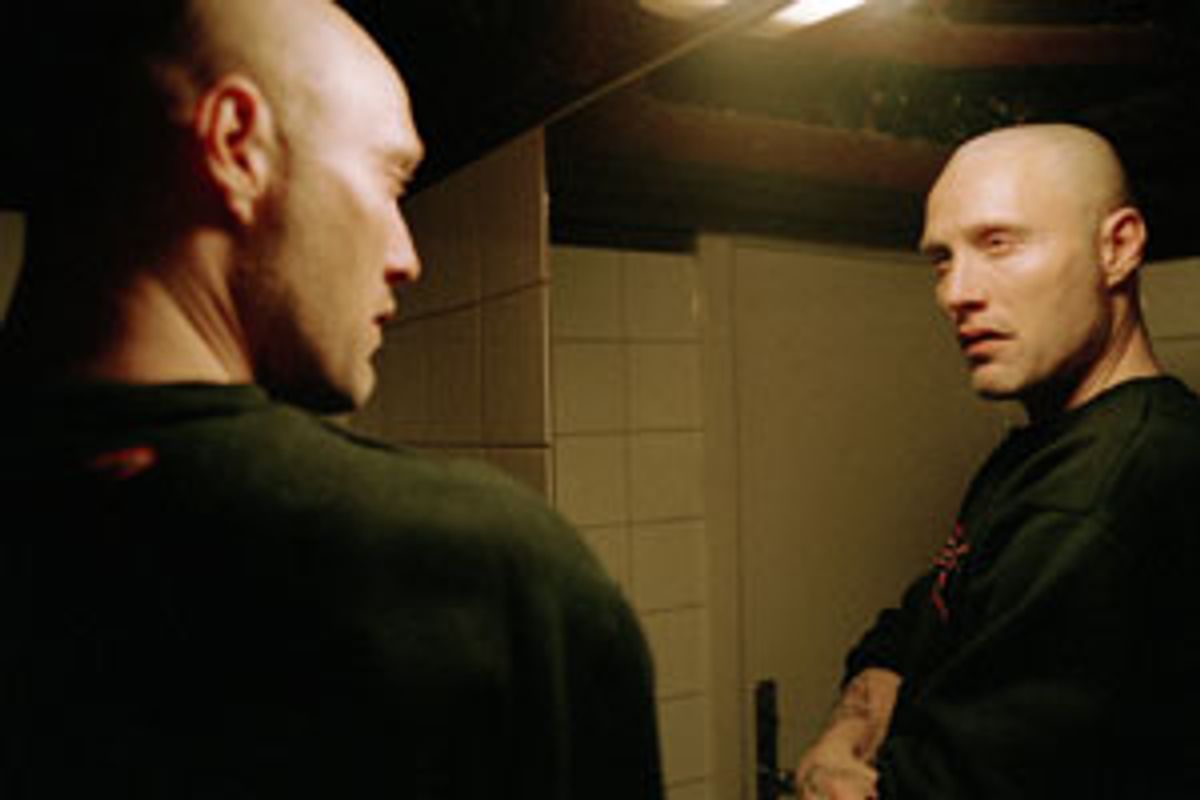 Nicolas Winding Refn didn't set out to make a crime trilogy that would become an international sensation -- and, quite possibly, the basis for a forthcoming series on American cable TV. (He won't say what network, but it's probably either HBO or Showtime.) He did it for the money.

With the clock winding down on the languid days of late summer, this week brings us one of the oddest and most challenging releases of the season, Refn's "Pusher" trilogy, three violent, low-budget films shot on the streets of Copenhagen, Denmark, with hand-held cameras and actors recruited from that city's criminal underworld. That's right, Copenhagen. Instead of the tidy citadel of liberal tolerance and nanny-state social democracy, Refn gives us a nightmarish city of callous killers, drug deals gone wrong, Slovenian and Turkish crime bosses, and skanky hookers who dump babies on the floor at all-night parties where they snort coke till their sinuses bleed.

Refn's films -- "Pusher," made way back in 1996, "Pusher II: With Blood on My Hands" (2003), and "Pusher III: I'm the Angel of Death" (2005) -- bear an obvious similarity to "The Sopranos" and similar third-wave TV crime dramas, which the 35-year-old Danish director doesn't deny. But the "Pusher" trilogy actually began before David Chase's series reached the air, and it has a specific history, a bloody-minded intensity, a formalist structure and a moral fervor that are very much its own. (At least at New York's Cinema Village, viewers will have the choice of watching the films separately or sitting through all three in succession on the same day.)

Refn, who was born in Denmark but spent his formative years in New York, is himself something of a cultural hybrid, almost a man without a country. "Pusher" was his first film, born of his teen addiction to the American crime movies he watched on TV or in the long-gone grind houses of pre-Disney-fied Times Square. "Nobody made films like that in Denmark," Refn tells me during an interview at the Manhattan office of Magnolia Pictures, his distributor. "It was something new, and it showed people over there that there was potential in that kind of material."

"Pusher" begins as a fairly standard '90s crime saga, almost an open imitation of Quentin Tarantino. We're following Frank (Kim Bodnia) and Tonny (Mads Mikkelsen), a couple of lowlifes and screw-ups who are getting in deeper and deeper trouble with their employer, an avuncular Balkan immigrant named Milo (Zlatko Buric), who is one of the city's biggest drug dealers. But something happens on the way to the film's haunting and ambiguous conclusion: Frank gradually moves front and center, and the story becomes as much about his self-hatred and strangled emotional life as about whether he will survive these adventures.

"Even when I made the first film, when I was 24 years old," Refn says, "I realized that I wasn't interested in drugs or violence. I don't know anything about that. I don't drink and I don't smoke. I was interested in the vulnerability of the characters. That to me was where the real drama lay. The environment of crime and drugs was like a shell, and it was a question of what I put into that shell. I find people's vulnerability much more dangerous than their physical danger, their psychotic behavior, or the fact that they're high on drugs or whatever. Their vulnerability is actually much more frightening.

"I made 'Pusher,' to begin with, because I liked gangster films and I had seen a lot of gangster films. And I shot it in chronological order; I always do that: scene 1, scene 2, scene 3, scene 4. Halfway through that, I began to realize that I was more interested in the emotional lives of the characters, the morality tale. So 'Pusher' is like two different half-movies. Suddenly the film switches focus and becomes about the descent of this man who's incapable of showing his emotions. That takes over and becomes the driving force."

When "Pusher" was released, it made a modest splash in Denmark and went unnoticed elsewhere. Refn moved on to other projects, becoming one of those directors who hover on the fringes of the international film scene without finding the right opportunity. He made a semi-experimental film in Denmark called "Bleeder" that has some admirers but got the Danish actors union exercised over his alleged working conditions. ("It was quite silly," he has said of the episode. "They claimed I'd put actors through unnecessary psychological pain, but it was basically a union wanting to show they were worth something. It was insane, stupid ... but it didn't hurt me.") He came back to America in 2002 to direct John Turturro and Deborah Kara in "Fear X," a murky, moody "Memento"-esque mystery that critics either loved or hated, but that attracted almost no audience.

Sometimes such disasters happen for a reason. "Fear X" left Refn with a personal debt of almost $1 million, he says. He had a wife and child to support and his parents were paying his rent. One of his financiers suggested he make a sequel to "Pusher," his only semblance of a hit. "At first I said, 'No way, I will not go back,'" Refn remembers. But when he watched "Pusher" again he saw it as an episodic tale about family ties and friendships, with an interlocking cast of characters. By that time "The Sopranos" had already sent shock waves through the world of dramatic television, and Refn could see the potential for a series, rather than a sequel.

When asked if he's OK with the inevitable comparisons between his trilogy and "The Sopranos," Refn answers, "Hell, yeah. Sometimes it's the laziness of the media to put this all under the same umbrella, but at the same time I can't escape it. It's kind of dumb for me to insist that I made my movie first. Because it was 'The Sopranos' and 'The Shield' and 'The Wire' that influenced me into creating the 'Pusher' concept. Everybody steals, and if people say they don't steal they're lying. It's all a question of how we adapt it to our own style."

One of the central elements to the "'Pusher' concept" is the idea that the protagonist of each film disappears, his fate unresolved. Also, Refn decided to fill most of the roles, beyond the main characters, with nonactors, many of them criminals, he met on the streets of Copenhagen. "Listen, it needed to be accurate in order to work," he says. "I think an audience would react very quickly if it didn't feel real, if it was just a pre-manufactured American film made in Europe."

At the end of "Pusher," Frank, the crude antihero, is poised between prison, death and escape from Copenhagen. But all we hear about him in "Pusher II" is rumor. Tonny, his skinhead, perma-loser sidekick, emerges from prison at the beginning of the second film, determined to remake himself, get back into the good graces of his father, a midlevel gangster, and perhaps even take responsibility for the child he has (probably) fathered with the cynical, abusive and amazingly coked-up Charlotte (Anne Sorensen).

There's some shocking violence in "Pusher II," but it's a more expressive cinematic work, verging here and there on dreamlike surrealism. For all his idiotic braggadocio, it's not quite possible to hate Tonny (marvelously portrayed by Mikkelsen, one of Denmark's most popular actors). Like Frank in the first film, Tonny commits terrible crimes and is catapulted into an uncertain future, his destiny never to be revealed.

Milo, the Bosnian (or perhaps Slovenian) crime boss from the first film, makes only a brief appearance in "Pusher II," but becomes the leading character in "Pusher III." He's the most difficult figure of the whole series. A big, gentlemanly sad sack with a distinct resemblance (as Refn observes) to Krusty the Klown, Milo is attending Narcotics Anonymous meetings and trying to swing major drug deals, all while cooking dumplings and making arrangements for the birthday party of his bossy daughter, Milena (Marinela Dekic). He's a loving dad who smokes smack in a restaurant bathroom, orders a Turkish underling packed into a freezer, and kills a random Russian pimp with a hammer.

"Pusher III" is also, far more clearly than the earlier films, a chronicle of life in the rapidly changing ethnic mix of western Europe. Refn estimates that only 20 percent of the film is in Danish -- and much of that is between people for whom it's not a first language. (Milo and his Turkish employee-cum-rival Muhammad have a funny argument over which of them speaks clearer Danish.) The rest of it is in Serbo-Croatian, Turkish, Arabic, Albanian, Macedonian, Polish, Russian and English, the lingua franca of all international business, including crime.

"Unfortunately, our government is very racist," Refn says. "They want to be globalized, they want to be part of the world, but they're just not. Having grown up in America with a lot of nationalities around me, that's just part of how I see the world. I wanted to make a film about today's Denmark where I didn't have to touch on the obvious social issues, about integrating immigrants into Danish society or whatever. Which is something we debate endlessly. I think we have to get beyond that, but the attitude in Denmark is still that everyone should be like us." He defends the Danish newspaper's right to publish those now-infamous cartoons making fun of the prophet Mohammed, but observes that hardly anyone in the press or the Danish public understood ahead of time that Muslims might find the cartoons offensive.

Refn is now in negotiations with that unnamed American cable network to adapt "Pusher" into a TV series, and has already begun working on a film about the Viking discovery of America in the 10th century. I doubt anything he can do with the "Pusher" franchise at this point will outdo the penultimate scene of "Pusher III," which is one of the toughest things I've ever had to watch in a motion picture. Like all of Refn's protagonists -- and like the protagonists of so many crime films -- Milo has done bad things, and has dead bodies on his premises. He enlists a former henchman (seen in "Pusher"), now a suburban restaurateur, to help him get rid of them.

It's a horrifying sequence with notes of dark, dark comedy, and for the love of God I never want to see it again. For Refn, it goes to the heart of his whole enterprise. "The first film was viewed in some places as a glorification of crime, of the 'live fast, die young' attitude," he says. "As you know, having kids, you're worried about what the media feeds your children. In this world you have a responsibility -- not to be moralistic, but to think about what you're doing. In 'Pusher III' I wanted to cement the fact that the world of these characters is completely inhuman. Even though it is repackaged and resold in music and film and literature as this glorious, exciting thing, where you live to the fullest, I wanted to say as clearly as I could that this is a world in which people are just flesh, just meat and bone. They have no soul."

The "Pusher" trilogy opens Aug. 18 at Cinema Village in New York, Oct. 6 at the Cleveland Institute of Art Cinematheque, Oct. 20 at the Gene Siskel Film Center in Chicago, Oct. 28 at the Dryden Theatre in Rochester, N.Y., and Nov. 3 at the Egyptian Theater in Los Angeles. Further engagements, and a DVD release, will follow.