The Bush doctrine under surveillance 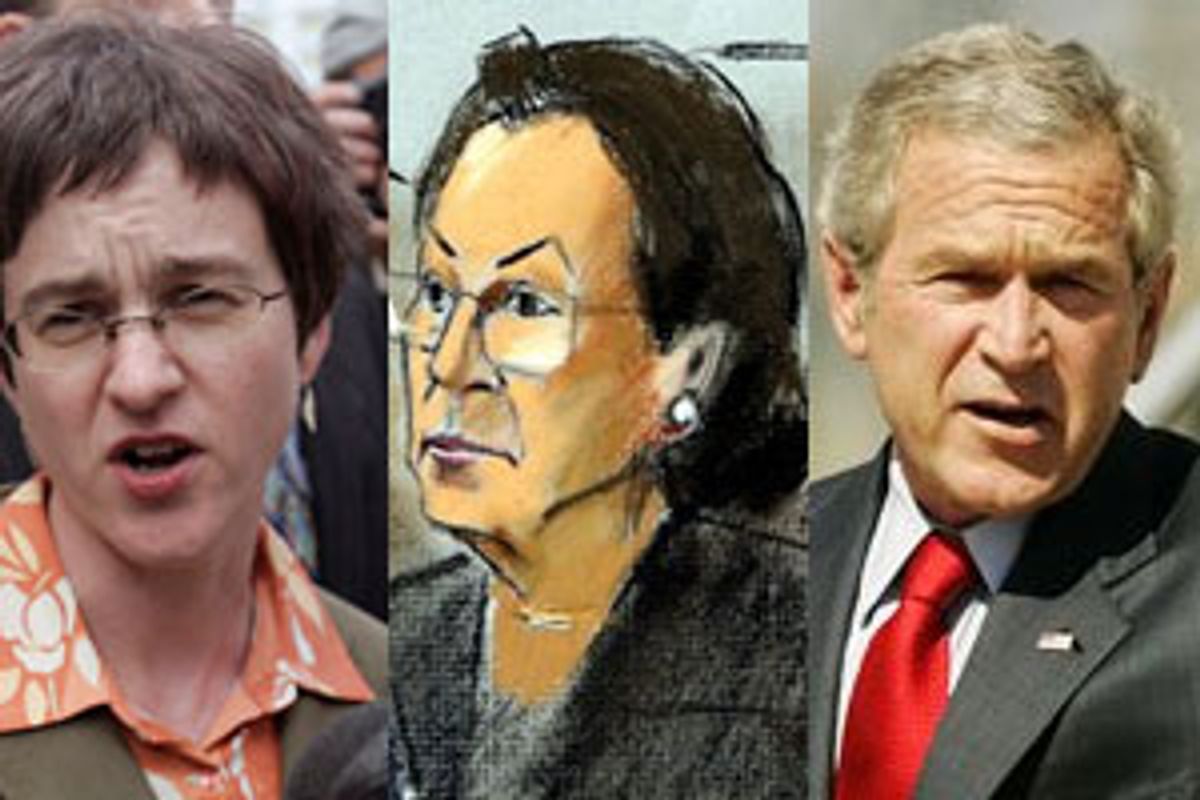 A federal district judge ruled Thursday that the Bush administration's warrantless eavesdropping program is unconstitutional, and on that basis ordered that the controversial program run by the National Security Agency cease immediately. The judge, Anna Diggs Taylor of the U.S. District Court for the Eastern District of Michigan, found that warrantless eavesdropping violates both the First and Fourth Amendments of the U.S. Constitution, as well as the 1978 Foreign Intelligence Surveillance Act (FISA), which makes it a criminal offense to eavesdrop on Americans without first obtaining warrants.

The decision is the first ruling by any court on the legality of the NSA program, a secret Bush program that was first revealed last December by the New York Times. In a ruling striking for its unusually emphatic language, the court rejected every argument advanced by the administration to defend its right to eavesdrop without warrants. The court also rejected the administration's claim that mere adjudication by the court of the legality of the NSA program would risk the disclosure of "state secrets," an assertion the administration has used repeatedly to avoid judicial review of its actions. And perhaps most significantly, the judge resoundingly rejected the administration's broad theories of executive power: "There are no hereditary kings in America," Taylor wrote, "and no powers not created by the Constitution."

The decision has already been appealed by the Bush administration to the 6th U.S. Circuit Court of Appeals, considered to be conservative-leaning, and the parties have agreed that the District Court's order will be stayed (that is, not enforced) until Sept. 7, when the court will further decide if the order will be stayed pending an appeal.

It is important to be clear about what this decision means and what it does not mean -- particularly since the White House, among others, is already depicting this ruling as some sort of epic blow to the administration's efforts to fight terrorism. This ruling does not, of course, prohibit eavesdropping on terrorists; it merely prohibits illegal eavesdropping in violation of FISA.

Thus, even under the court's order, the Bush administration is free to continue to do all the eavesdropping on terrorists it wants to do. It just has to cease doing so using its own secretive parameters, and instead do so with the oversight of the FISA court -- just as all administrations have done since 1978, just as the law requires, and just as it did very recently when using surveillance with regard to the U.K. terror plot. Eavesdropping on terrorists can continue in full force. But it must comply with the law.

This ruling also has critical implications for the administration's efforts to change the law so as to legalize its warrantless eavesdropping activities. Sen. Arlen Specter, working in collaboration with the White House, has introduced legislation that would effectively eliminate all restrictions on the president's power to eavesdrop on Americans. That bill would make the process of obtaining warrants optional, rather than mandatory, and it would all but kill off judicial challenges to the legality of the president's eavesdropping.

But the court's ruling today strongly suggests that the Specter bill would be just as unconstitutional as the president's current eavesdropping program. This is because the court found warrantless eavesdropping generally to be a violation of the Fourth and First Amendments. Thus, Congress cannot authorize warrantless eavesdropping via legislation -- Congress cannot authorize activities that are unconstitutional -- which would preclude enforcement of the Specter bill.

Still, commentators of every ideological stripe have quickly agreed that this opinion is argumentatively weak and thus vulnerable on appeal with respect to several critical issues. The court, for instance, barely explains why warrantless eavesdropping violates the Fourth Amendment, and its discussion of why such eavesdropping violates the First Amendment borders on the incoherent. And with respect to the most difficult hurdle the plaintiffs faced -- whether they have "standing" to challenge the NSA program in light of their inability to prove that their conversations were monitored -- the court made the best case it could as to why the plaintiffs should be allowed to proceed, but it relied on reasoning that is far from decisive.

Nonetheless, the political significance of this decision cannot be denied. The first federal court ever to rule on the administration's NSA program has ruled that it violates the constitutional rights of Americans in several respects, and that it violates criminal law.

And in so holding, the court eloquently and powerfully rejected the Bush administration's claims of unchecked executive power in the area of national security. The court observed that "it was never the intent of the Framers to give the President such unfettered control, particularly where his actions blatantly disregard the parameters clearly enumerated in the Bill of Rights ... We must always be mindful that '[w]hen the President takes official action, the Court has the authority to determine whether he has acted within the law.' Clinton v. Jones, 520 U.S. 681, 703 (1997)."

Ever since the 9/11 attacks, the Bush administration has insisted that nothing can restrict the president's decisions in any way with regard to national security, including laws enacted by the coequal branch of government, the Congress. Such a theory is wholly alien to the most fundamental principles that have defined this country since its founding. The court's decision today reaffirms that even in times of war, the president is bound by the rule of law and constrained by the protections guaranteed to Americans by the Bill of Rights. And that the Bush administration simply has no justification for acting outside the parameters of the law.