A Christian-Palestinian microbrewery is defying the hardships of occupation -- and perhaps Hamas' vision for an alcohol-free Islamic state. 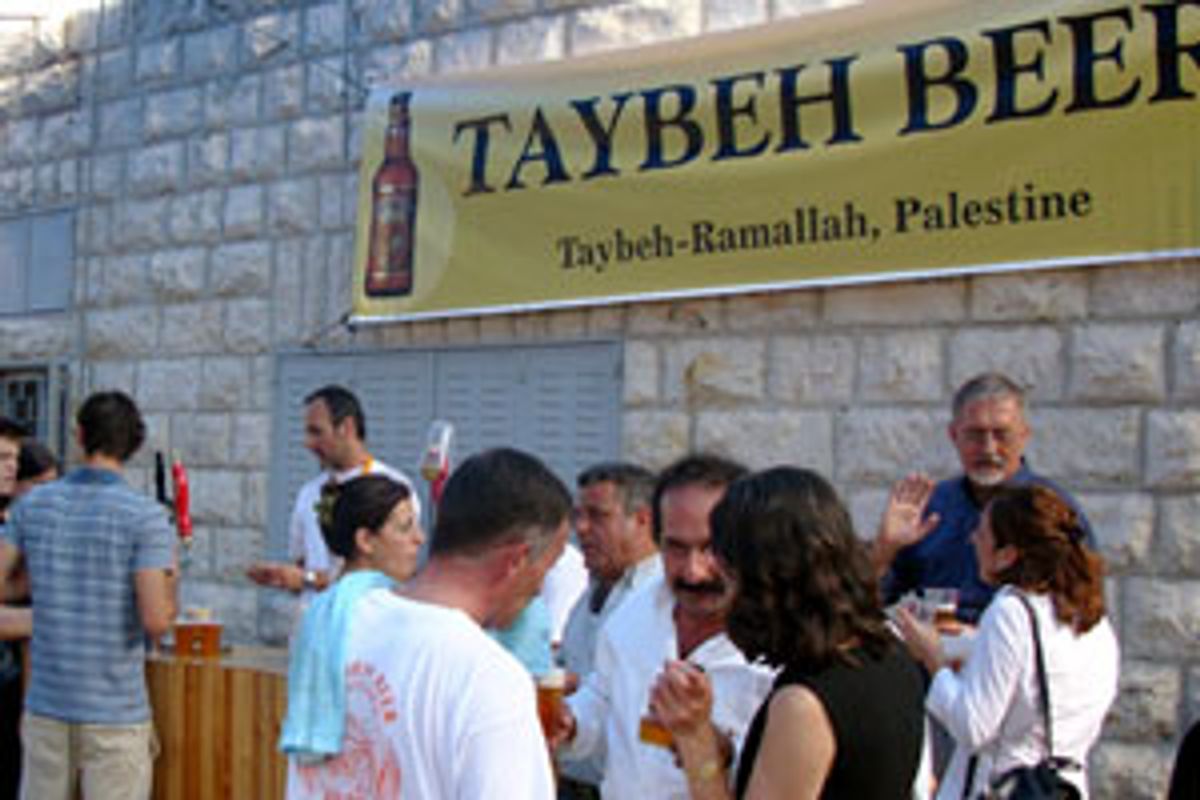 High up in the hills of the West Bank in mid-September, thousands of visitors arrived for a two-day village fair filled with music, folk dancing and local goods, from honey and oils to embroidery and olive-wood carvings. But the star attraction this year was a more surprising local offering: a German-style beer brewed here that bears the name of this small Palestinian village.

Located about 20 miles northeast of Jerusalem, Taybeh is a Christian enclave dotted with churches rather than mosques, but entirely surrounded by Muslim villages. The village festival is billed as an "Oktoberfest," after the annual beer-lovers bash in Munich -- although it takes place in September so as to avoid clashing with the Muslim festival of Ramadan.

Taybeh the beer is crisp, clean and very drinkable. It comes in light and dark versions, with a label that proudly reads "The Finest in the Middle East." Its makers seem to have tapped an unlikely region for venturing into the beer business.

"Everybody thought I was nuts to build a brewery in a Muslim region," said Nadim Khoury, the company's master brewer, regarding the glaringly obvious problem that the Quran forbids the consumption of alcohol.

Yet Palestinian Christians, who make up just under 2 percent of the total population of the Occupied Territories, aren't the only ones drinking Taybeh beer. "We produce 600,000 liters a year," said Khoury. "Of that, 30 percent sells to Israel and the remaining 70 percent within Palestine." Sales of Taybeh, he added, account for only 15 to 20 percent of total beer sales in the West Bank.

"I don't want to say exactly that the Muslims enjoy the beer more than the Christians -- but they do," said Sayib Nasser, a member of the Fatah Party and deputy governor of the local council in nearby Ramallah. Nasser, who is a Muslim, took part in the festival's opening ceremony. "The festival has our support and our blessing," he said. "We are proud of it."

Such sentiments might seem at odds with those of the Hamas Party, which is now predominant in Palestinian politics. Since victory in last January's elections, Hamas officials have spoken of bringing Palestinian society into line with Islamic law, including ridding the nation of alcohol. Some officials have suggested the party would lead by example rather than by coercion. "With regard to Sharia, we can't impose that because we don't have a state," said Mahmoud Ramahi, according to the London Times. The West Bank spokesman for Hamas, speaking shortly after the election victory, also said the party would not force women to cover themselves, or close restaurants that serve alcohol. "First let us liberate our land," he said, "then we'll hold a referendum to see if the people want an Islamic or secular state."

With the ascendancy of Hamas, Gaza is now reportedly dry, and the West Bank could be next. For its part, the Taybeh Brewing Co. has an intriguing strategy to deal with the changing political landscape. According to Khoury, the company has plans to introduce a non-alcoholic version of its beer -- including a Hamas-green label on the bottle.

But it also plans to keep producing the brews that have been successful to date. The first batch of Taybeh, which means "delicious" in Arabic, was brewed during the optimistic times of the Oslo peace process. Members of the Khoury family, who had migrated to the United States, returned to Taybeh in 1994, after spending the prior 20 years in Boston. They opened the brewery with the blessing of then Palestinian President Yasser Arafat, whose picture still adorns the buildings of the Fatah-run council in Taybeh. To ensure sales in Israel, the Khourys obtained a kosher certificate for the beer from the rabbi at the neighbouring Jewish settlement of Ofra (with which relations cannot otherwise be described as very good).

Nadim and his brother David -- who is also currently the mayor of Taybeh village -- put their life savings into the project, and it soon paid off. By 2000, just before the outbreak of the second Palestinian intifada against Israel, their brewery was reportedly producing 4,000 bottles of beer per hour.

Nadim Khoury declined to discuss certain details of the business, including revenue and profitability. But he suggested that the continued production of the beer, under the difficult circumstances of occupation and regional upheaval, are proof enough of its success.

These days, the logistics of brewing and selling a beer in the West Bank can be daunting. "We face a lot of difficulties getting the raw material from abroad because of the road closures, the checkpoints and the wall," said Khoury. "I have a shipment tomorrow, and the truck that will take it to Haifa port will cost an arm and a leg because the driver will spend the whole day at checkpoints."

The Khourys' quest to "educate people's taste buds" and get them buying a better class of beer seems to be working in spite of the formidable obstacles. "Every time one of our trucks passes a checkpoint, the Israeli soldiers want a beer," Khoury said. Still, the flow into Israel has slowed, he said. Prior to the second intifada, two-thirds of Taybeh sales were in Israel; now the beer is available only selectively in bars of major Israeli cities and in Arab parts of Nazareth and the Galilee.

The beer is also brewed under license in Germany and Belgium, shipping from there to the U.K., home to a large Palestinian population. Khoury said the company also hopes to distribute the beer in select places in the United States starting sometime in 2007.

But a primary goal is to continue building a local market. The Khourys hope to steer Palestinian consumers away from popular Israeli brands such as Maccabee -- not just because they think their all natural, German-standard beer tastes better, but to grow support for local products and the local economy. "We want Palestinians to have pride in their national product," Khoury said.

Unemployment in Taybeh runs at approximately 50 percent, and its size has dwindled. The village currently has a population of about 1,300, after an estimated 9,000 of its residents picked up and moved overseas in recent years. "We feel so alone here, a minority, so it is so nice for us to see so many Christians here together," said Majd Laisoon, a 23-year-old from Taybeh who attended the festival. The Khourys estimated the number of visitors during the festival to be around 8,000, the majority of them coming from other Palestinian Christian enclaves such as Bethlehem, and parts of Ramallah and Jerusalem.

The show of support had particular resonance on a weekend that was marred by attacks on churches in the West Bank, after the pope's comments on Islam fueled anger across the region. "It was an intense weekend," said Dr. Maria Khoury, another family member. "We were very worried that something might happen here, and very grateful that it was peaceful."

David Khoury, the village mayor, emphasized unity. "We are Christians," he said, "but we are Palestinians first."

Legend has it that Jesus Christ was one of Taybeh village's early visitors, and it is home to a Byzantine-period Greek Orthodox Church. In other circumstances it might well be bustling with Christian tourists. "Jesus made Taybeh village famous in history, and now the beer is making it famous," said Nadim Khoury. "We don't have a country yet," he added, "but we have our own beer."