At war, in denial

Sixteen U.S. intelligence agencies contributed to the NIE report that concludes Iraq "has become the cause c 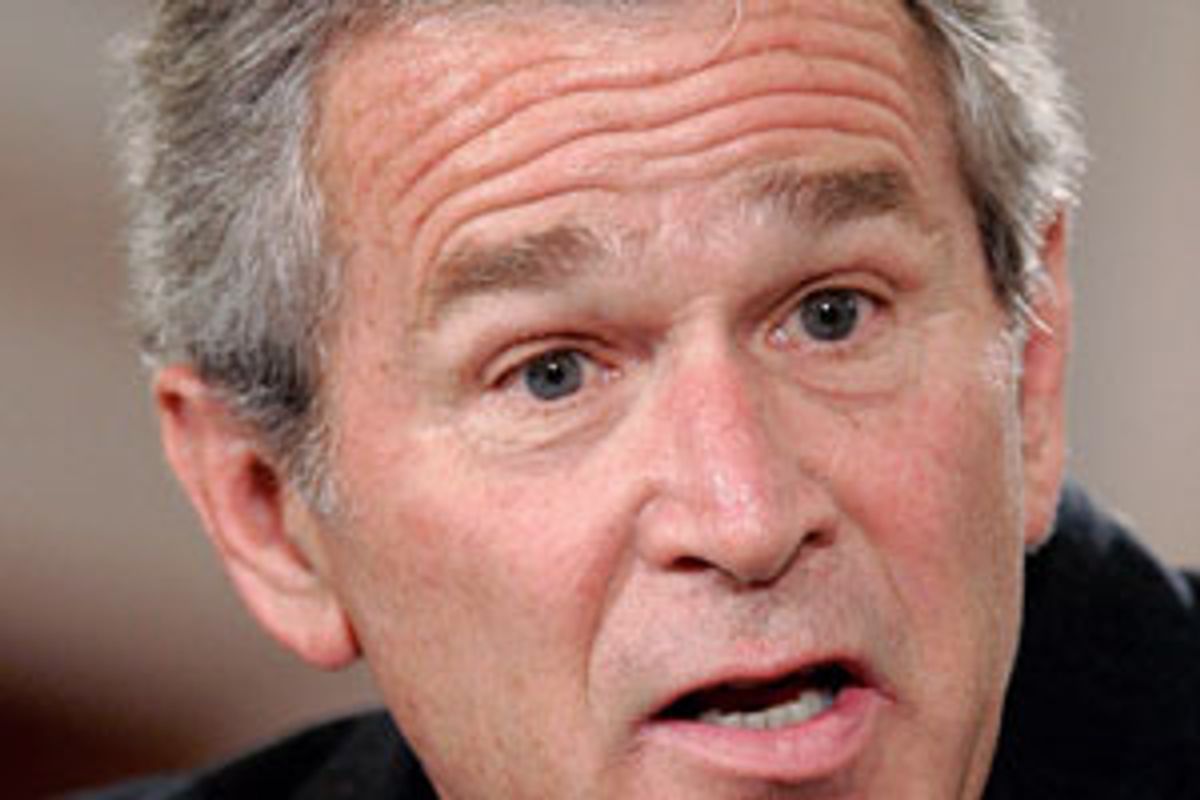 President Bush's first response to the report in the New York Times was to ridicule it for having "guessed" that the classified National Intelligence Estimate titled "Trends in Global Terrorism: Implications for the United States" stated that the war in Iraq was a major inspiration for jihadist terrorism. His second response, in the ensuing clamor after he declassified the NIE's key judgments confirming the accuracy of the initial Times report, was to dismiss those who accepted the NIE's conclusions as "naive." His next reaction was to declare, "I agree with their [the NIE's] conclusion that because of our successes against the leadership of al-Qaida, the enemy is becoming more diffuse and independent" -- a cause and effect that is nowhere to be found in the NIE.

The collective product of the 16 U.S. intelligence agencies, the first on Iraq since the invasion in 2003, the NIE was delivered to the White House this April. "The Iraq conflict," it said, "has become the cause célèbre for jihadists, breeding a deep resentment of US involvement in the Muslim world and cultivating supporters for the global jihadist movement." Not only is the Iraq war inspiring terrorism, but the jihadist movement has metastasized into spontaneously generated cells apart from the original al-Qaida organization, which itself is vastly reduced. In this struggle U.S. policy is inadequate to the task of containing terrorism's spread. "We assess that the underlying factors fueling the spread of the movement outweigh its vulnerabilities and are likely to do so for the duration of the timeframe of this Estimate."

The disclosure of parts of the NIE by the Times prompted Bush's angry denunciation of its public knowledge as little more than a partisan ploy. "And here we are," he railed, "coming down the stretch in an election campaign, and it's on the front page of your newspapers. Isn't that interesting? Somebody has taken it upon themselves to leak classified information for political purposes."

This latest episode indeed illumines the "political purposes" of intelligence, its suppression and distortion, and highlights the administration's intense pressures on the intelligence community, even in this NIE, whose findings on the consequences of the Iraq war have imploded Bush's carefully crafted rhetoric on terror.

Since Bush has possessed the NIE, he has spoken as though he had never received it. Yet, in the light of its revelation, it now seems that he was intent on refuting the report that the public did not know existed. "You know," said Bush at a press conference on Aug. 21, "I've heard this theory about everything was just fine until we arrived, and kind of 'we're going to stir up the hornet's nest' theory. It just doesn't hold water, as far as I'm concerned." Bush did not say where he had "heard this theory." Nor did he present evidence to oppose it. He simply asserted his authority against the phantom critic that unmasked turned out to be the entire intelligence community.

Once the NIE became known, Bush invented a conclusion in order to claim that any difficulties had their source in his success. He advanced a history of the past 20 years based on the tortured logic that because various acts of terror had happened in the absence of an invasion and occupation of Iraq, the invasion and occupation therefore could not be ascribed as a motive for terrorism now. "You know," he said, "to suggest that if we weren't in Iraq, we would see a rosier scenario with fewer extremists joining the radical movement requires us to ignore 20 years of experience. We weren't in Iraq when we got attacked on September the 11th."

Bush's sophistry obscured that he had received many warnings before the invasion that the consequences spelled out in the NIE would come to pass. His father's close associate, Brent Scowcroft, the elder Bush's national security advisor, who was a member of the President's Foreign Intelligence Advisory Board before he was booted out in 2005, told Bush in stark terms that an invasion would lead to sectarian violence within Iraq and stoke terrorism. Scowcroft was not alone. Other former associates of the elder Bush confided in me that they also told President Bush to his face the same things that Scowcroft had.

Those were not the only cautions the Bush administration received at that time. One month before the invasion, in February 2003, the British government's Joint Intelligence Committee reported, "Al Qaeda and associated groups continue to represent by far the greatest threat to western interests, and that threat would be heightened by military action against Iraq." The British circulated the JIC report to U.S. intelligence and the Bush administration, which studiously ignored it.

Within months of the invasion, in August and November, the CIA station chief in Baghdad wrote urgent reports (called "aardwolfs") detailing how U.S. missteps had destabilized Iraq and fueled the insurgency. When Bush was briefed he was furious, not at the blunders or those committing them but at the CIA chief for having the insolence to catalog them. "What is he, some kind of defeatist?" Bush said. Soon, the station chief was replaced. "He had committed the unpardonable sin of telling the truth," writes James Risen, the New York Times correspondent, in his book "State of War."

The selective declassification of the NIE hardly clarifies its full contents and necessarily raises natural suspicion about them. The key judgments cover little more than three pages; the whole document is reportedly more than 30 pages. And the key judgments may be more toned down than parts of the analysis. Caveats, objections and conflicts may be lodged deep in the text or footnotes, as they were in the flawed October 2002 NIE on Iraqi weapons of mass destruction. The key judgments do not record what the various agencies, the CIA and the Defense Intelligence Agency reported from the field, though that may be reflected elsewhere in the complete document.

Moreover, Rep. Jane Harman, D-Calif., the ranking Democrat on the House Intelligence Committee, has learned that another, new NIE on Iraq has been produced, and, despite her request for its public release, is being withheld by the administration, even from members of Congress, until January 2007, that is, until after the midterm elections.

Even the key judgments in the April 2006 NIE suggest unacknowledged political compulsions on intelligence by their glaring omissions. Whether these distortions appear as a result of direct pressure of the sort that Vice President Dick Cheney applied to CIA analysts before the invasion or have become assimilated as the modus operandi under Bush cannot be determined. But the static is apparent in the NIE's listing of causes of jihadism. Here are the exclusive reasons given:

"Four underlying factors are fueling the spread of the jihadist movement: (1) Entrenched grievances, such as corruption, injustice, and fear of Western domination, leading to anger, humiliation, and a sense of powerlessness; (2) the Iraq jihad; (3) the slow pace of real and sustained economic, social, and political reforms in many Muslim majority nations; and (4) pervasive anti-US sentiment among most Muslims all of which jihadists exploit."

What are obviously missing are 1) the Israeli-Palestinian conflict and Bush's neglect of the peace process, and 2) the failure of Bush's policy and calls for "democracy" to reduce violence or terrorism -- instead contributing to the rise of Hamas and Hezbollah, followed by his refusal to deal with them as political actors.

These fundamental factors must certainly have occurred to the analysts of the 16 intelligence agencies. Their absence must be attributed to their directors and the political leadership of the administration. These omissions combined with the empty but stentorian rhetoric about "democracy" that pervades the key judgments indicate that the NIE suffers from ideological buffeting, yet another untold story that will perhaps someday surface in a comprehensive history of Bush's abuse of intelligence.

Just before the existence of the NIE was reported, Bush gave an interview in which he offered his historical judgment that the sectarian violence in Iraq will be seen in retrospect as an insignificant passing phase in the glorious march of freedom. "I like to tell people," said Bush, "when the final history is written on Iraq, it will look like just a comma because there is -- my point is, there's a strong will for democracy."

Bush's phrase, "just a comma," may just be a signifier to his religious-right base. "Never put a period where God has put a comma" is a common admonition among the faithful. What authority could a National Intelligence Estimate have in comparison with God's will? But Bush's signal to dismiss the disturbances of the external world also points to an underlying premise of his policy. Bush's state of war is a state of denial.