Another spying scandal for Capitol Hill

Hewlett-Packard ex-chairwoman Patricia Dunn got grilled about an unfolding scandal one lawmaker called "a plumbers' operation that would make Richard Nixon blush." 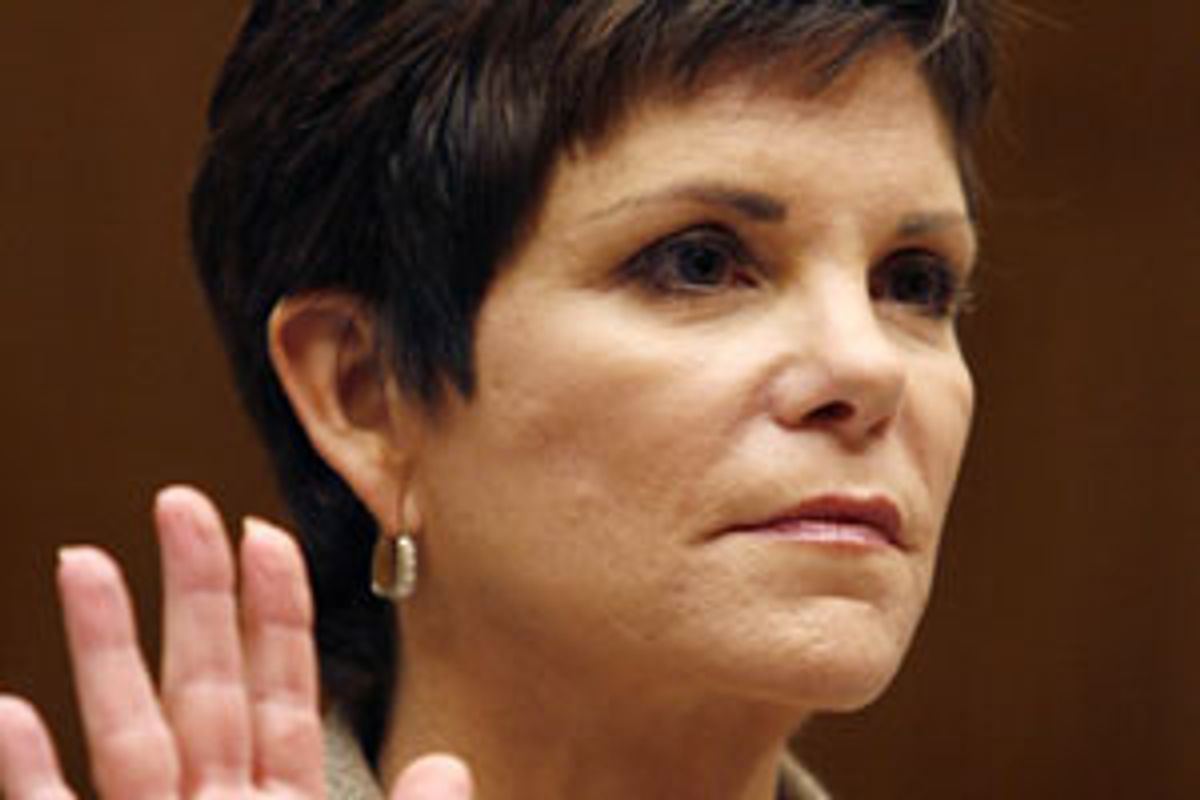 You know a company is in deep trouble when both its general counsel and its chief ethics officer resign on the eve of their congressional testimony -- and then immediately invoke the Fifth Amendment when they are sworn in on Capitol Hill. So it was with Hewlett-Packard on Thursday as most of the major players in the fast-moving Silicon Valley boardroom scandal were scheduled to have their moment of truth (or, at least, what passes as such in Washington) before congressional inquisitors.

There was an immediate letdown as Ann Baskins (the now ex-general counsel) and Kevin Hunsaker (her suddenly departed deputy), along with a half dozen private investigators and telephone snoops, all declined to testify, completely wiping out the initial panel of witnesses. Gone was the hope that Congress would unravel the underlying mystery of how a respected corporation like Hewlett-Packard could launch an internal leak investigation that morphed into a witch hunt -- one that included using flagrant misrepresentation (called by the euphemism "pretexting") to obtain personal phone records, computer spyware to track which employees forwarded e-mails to each other, and elaborate schemes to plant undercover moles in newsrooms.

Before a word of relevant testimony was heard, members of the House Energy and Commerce subcommittee vied with each other to come up with the best one-liners to describe the saga of how Hewlett-Packard besmirched its honor by trampling on privacy rights. Colorado Democrat Diane DeGette likened it to a "made for TV movie." Tammy Baldwin, a Wisconsin Democrat clearly taken with the gumshoe angle, called it a "third-rate detective novel." Florida Republican Cliff Stearns invoked both the Keystone Kops and "Mission Impossible." But Michigan Democrat John Dingell, who has served in the House for more than a half-century, came up with the pitch-perfect analogy when he invoked Watergate to call it "a plumbers' operation that would make Richard Nixon blush were he still alive."

In an irony not lost on both Democrats and Republicans, Hewlett-Packard was being pressed to justify using quasi-legal subterfuge to obtain phone records as the full House was poised to vote to give the National Security Agency blanket permission to continue its warrantless eavesdropping program. Idaho Republican Butch Otter, a conservative with strong libertarian sympathies, wondered how Congress "could claim the moral high ground" on privacy "when some activities of our government have been questioned."

Instead of shocking new disclosures, what Thursday's hearing offered was a character study of Patricia Dunn, the former chairwoman of the Hewlett-Packard board (she resigned last week) and the central player in the leak investigation. When Dunn, now 53, was appointed in early 2005 to succeed Carly Fiorina as the head of the faction-riven Hewlett-Packard board, her elevation was regarded as an up-by-her-own-bootstraps triumph for a woman who had started in business as a secretary for Wells Fargo Investment Advisors.

There is no evidence that Dunn demanded that private investigators skirt the edge of the law (and perhaps go over it) in their efforts to discover which board member was giving the press accounts of the board's internal deliberations. (George Keyworth, Ronald Reagan's former science advisor, was later identified as the leaker.) But internal Hewlett-Packard memos and e-mails suggest that Dunn knew the rough contours of what was being done in the name of the board and did nothing to stop the investigators' subterranean practices.

Dunn, who has survived several bouts of cancer, could have also claimed her rights against self-incrimination. By instead testifying, she took on the task of simultaneously trying to accomplish two semi-contradictory goals: restoring her reputation and saying nothing that would add to her legal jeopardy in the litigation that is certain to flow out of the Hewlett-Packard meltdown. As her lawyer, James Brosnahan, said after the hearing, "Patty Dunn is a fighter. Everyone who thought that she'd go quietly into the night is wrong."

Dunn's defense -- which is based on the supposition that a talented, driven woman could also be obtuse -- came shining through as she described in her opening statement to the committee her dealings with an outside investigator, Ron DeLia, who had earlier invoked the Fifth Amendment. "In my two or three conversations with Mr. DeLia," Dunn said, "I learned that checking telephone records was a standard investigative technique at HP, and that they were drawn from publicly available sources." In reality, DeLia and his shadowy sub-contractors obtained these records through impersonation and other unethical (if perhaps legal) means.

"I understood that you could call up and get phone records -- and it is a common investigative technique," Dunn also said. As she continued to repeat her innocent assumption during her nearly five hours of testimony, Oregon Republican Greg Walden finally lost his patience. With a note of puzzlement Walden asked, "You thought that I could call up and get your phone records?" Dunn responded, "I thought you could." Finally, shaking his head with incredulity, he simply inquired, "You're serious?"

In a technical sense, Dunn was an impressive witness. Toward the end of the afternoon, both Republican subcommittee chairman Ed Whitfield of Kentucky and DeGette, the senior Democrat on the panel, had that glazed, weary look that can often be seen in bus stations at 3 o'clock in the morning. Dunn, in contrast, was sitting at the witness table, not a hair out of place, with the kind of strict posture that Emily Post would admire. The only hint of Dunn's nervousness was her tight two-handed grip on her pen.

Dunn's difficulties at Hewlett-Packard may have partly stemmed from her self-imposed tunnel vision and her unswerving belief in corporate hierarchies that left her behaving as if ethics were not her department. In her written chronology provided to the committee, Dunn acknowledged that she had been briefed about a "sting" operation that would somehow expose the leaker by feeding fabricated information to a business reporter covering the company. Asked by DeGette about her feelings as to whether this was proper corporate conduct, Dunn admitted, "This did raise some concerns for me." The Colorado Democrat pressed her on what she did as a result. Dunn's answer was classic bureaucratic buck-passing: "I sent the team to management to get approval for their techniques."

While Dunn spent half the afternoon expressing "regret" in a passive mistakes-were-made fashion, she drew the line there regarding her culpability in the scandal that has left Hewlett-Packard reeling and cost her the chairwoman's seat. "I do not accept personal responsibility for what happened," she flatly declared at one point. While perhaps integral to Dunn's legal strategy, this stubborn response may represent the twilight of the career of a boardroom champion who, as she testified, prides herself on her mastery of corporate governance.