Kate Winslet's porcelain skin and perfect figure are part of the problem with this messy melodrama, debuting at the New York Film Festival. 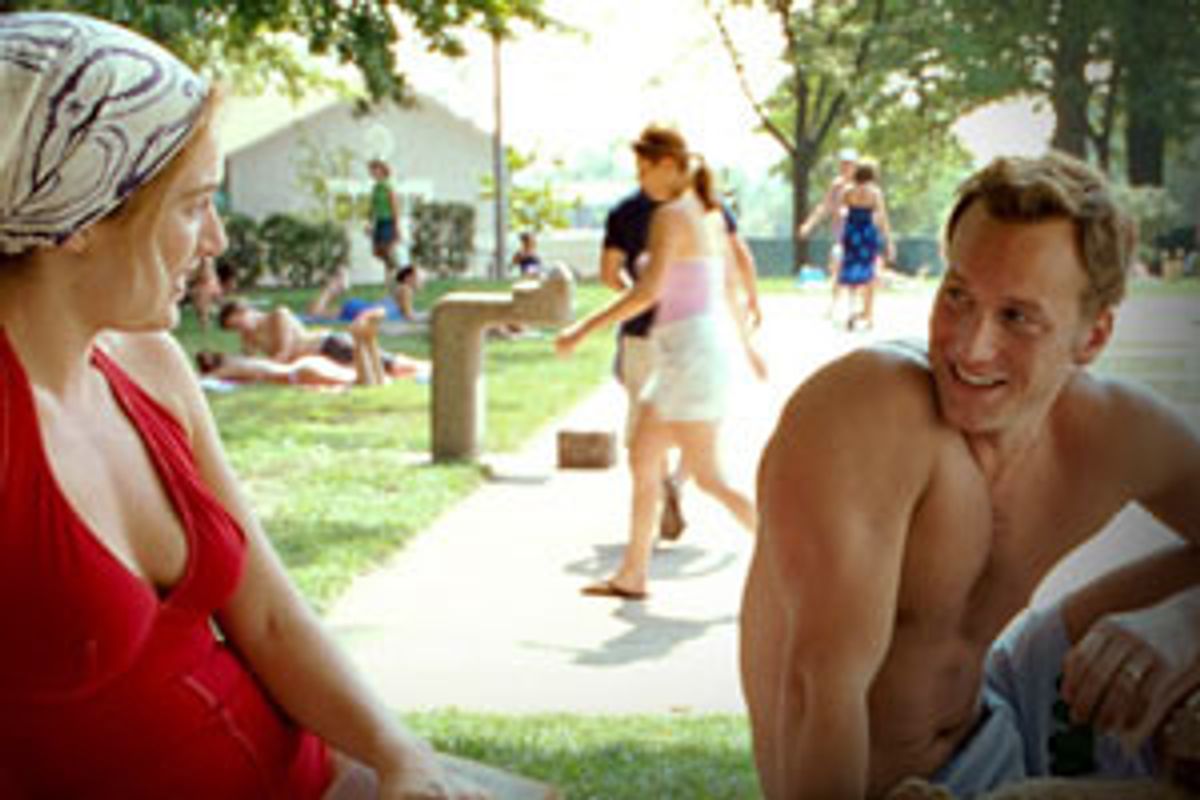 "Little Children," Todd Field's long-awaited follow-up to his 2001 debut feature, "In the Bedroom," is exactly the kind of movie I supposedly like, and instinctively root for. It's a big, messy, ambitious melodrama that depicts the ordinary life of American suburbia as a zone of high passion and tragedy. Its characters may lie, scheme and betray each other; they may make atrocious decisions in the middle of the night. But we recognize something of ourselves in them, and forgive them. It's very "Short Cuts," very "Magnolia," a little "American Beauty."

That's exactly the problem. Why did I come out of "Little Children" (which premieres this weekend at the New York Film Festival, and opens in theaters Oct. 6) feeling so profoundly dissatisfied? Because Field has made a type of movie rather than an individual movie, an upscale formula picture that announces its own moral seriousness rather than something built organically from mind and heart. I had much the same reaction to "In the Bedroom," which is ponderously paced and full of earnest, soul-searching dialogue that sounds nothing like the way people actually talk. These flaws were redeemed, or at least papered over, by the film's fatalistic Greek-tragedy plot, its prodigious cast and Field's unquestioned ability to create memorable shots.

Some of those ingredients remain present in "Little Children," but Tom Perrotta's Cheever-esque novel of the same name (jointly adapted by Field and Perrotta) provides a more unwieldy vehicle than the miniature Andre Dubus story that inspired "In the Bedroom." Field and his cinematographer, Antonio Calvache, repeatedly rescue scenes through their exquisite pictorial composition, their leisurely crawls through comfortable haute-suburban yards and spacious, but never ostentatious houses. Certainly Kate Winslet, as an intellectual trapped in suburban wifely hell, has never looked more beautiful.

Even Winslet's porcelain skin and exquisite figure create dramatic problems for the film. Her character, Sarah, is supposed to be an ordinary-looking woman who lures Brad (Patrick Wilson), a hunky stay-at-home dad known to the playground moms as the "Prom King," into an affair -- sweet and platonic at first, then very much not so -- and away from his knockout wife (Jennifer Connelly). I understand that this is an American movie, and they're simply not going to cast somebody who's below, say, 7.7 on the hotness scale. But making Sarah look like Botticelli's Venus, just with messy hair and a cardigan, destroys an entire plot point.

It may seem unbearably pretentious to complain that a film actress is too beautiful for her role, but in this case it's symptomatic of a larger problem. Field has lots of ideas about how to shoot individual scenes in "Little Children," but none about how to stick them together. I'm not opposed in principle to voice-over narration in dramatic films, but one should always ask what purpose it's serving. The talky narrator who comes and goes, seemingly at random, throughout "Little Children" is not one of the characters but a quasi-ironic, godlike voice who tells us what the characters are thinking. This isn't cleverness or postmodernism; it's desperation. When your story just isn't working, just insert some dude to tell us what's going on and what it all means.

"Little Children" has a large but somehow impoverished cast of characters who bump around the town of East Wyndam, colliding in ways that are meant to be significant. Only Sarah and Brad seem reminiscent of real human beings, and only one of them is in any way interesting. I can't honestly tell if Patrick Wilson can act or not; he looks like the young Kevin Costner, plus an impressive pile of extra gym-toned muscle, and that, plus a certain affable, depressed sweetness, is about all we get from Brad. He's supposed to be studying for the bar exam at night, but instead he hangs around the schoolyard watching teenage boys skateboard, plays touch football with cops, or hits the local hot-sheet motel with Sarah.

I suppose Brad's wife, Kathy, Connelly's character, is not a caricature. She's a nonsensical nonentity who plays almost no role in the story; I can't imagine why Connelly's agent told her to take this part. We're apparently supposed to believe that a documentary filmmaker, working on a project about kids whose fathers were killed in Iraq, is paying the bills in this expansive suburban home while Brad flunks the bar and boffs the Botticelli babe. And what lies between this couple, anyway? Do they love each other, or are they the kind of good-looking creeps who married each other out of sheer eye-candy narcissism? Even the snarky narrator can offer no clues.

Winslet wanders through this unspecific Northeast Corridor bedroom community with a sort of distracted luminosity, repeatedly rescuing the picture from its own pointlessness. At a gruesome meeting of a ladies' book club, Sarah defends "Madame Bovary," both the book and the character, pointing out that Western literature's most famous desperate housewife is, after her own fashion, a crusader for women's sexual freedom. "In other words, she's a slut, " proclaims one of her snake-tongued playground rivals. It's a funny, affecting scene, but if Sarah is our Emma Bovary, the consequences of her actions never become clear.

In fairness, Field and Calvache load the film with lovely and mysterious images: Sarah's 4-year-old daughter standing alone on the street at night, watching the huge moths bounce off the big halogen light fixture high overhead; Ronnie sitting by himself on the playground swings, weeping. "Little Children" seeks, and occasionally captures, a genuine and almost ubiquitous phenomenon: We may find ourselves on the cusp of middle age, with a whole scheme of mortgages, children and careers laid out before us, but that does not free us from the anarchic lusts, the endorphin highs and lows, of adolescence.

But I'm sorry, an interesting premise, a keen eye and a veneer of emotional seriousness are not enough. "Little Children" is going to get some very good reviews, and right now its producers are expecting to line up onstage at awards shows toward the end of winter. That doesn't change the fact that it's an unholy mess, simultaneously too Gothic and too sarcastic, that preaches liberation and delivers only puritanism. It's a craftsmanlike but robotic imitation of "interesting" filmmaking, only in patches, and by accident, the real thing. Let it win awards; no one will even remember it in five years.