The elephant in the room

Mark Foley's sexual pursuit of underage boys has Republicans cowering in defensive spin and frantic scapegoating. But will the scandal ensure a November sweep for Democrats? 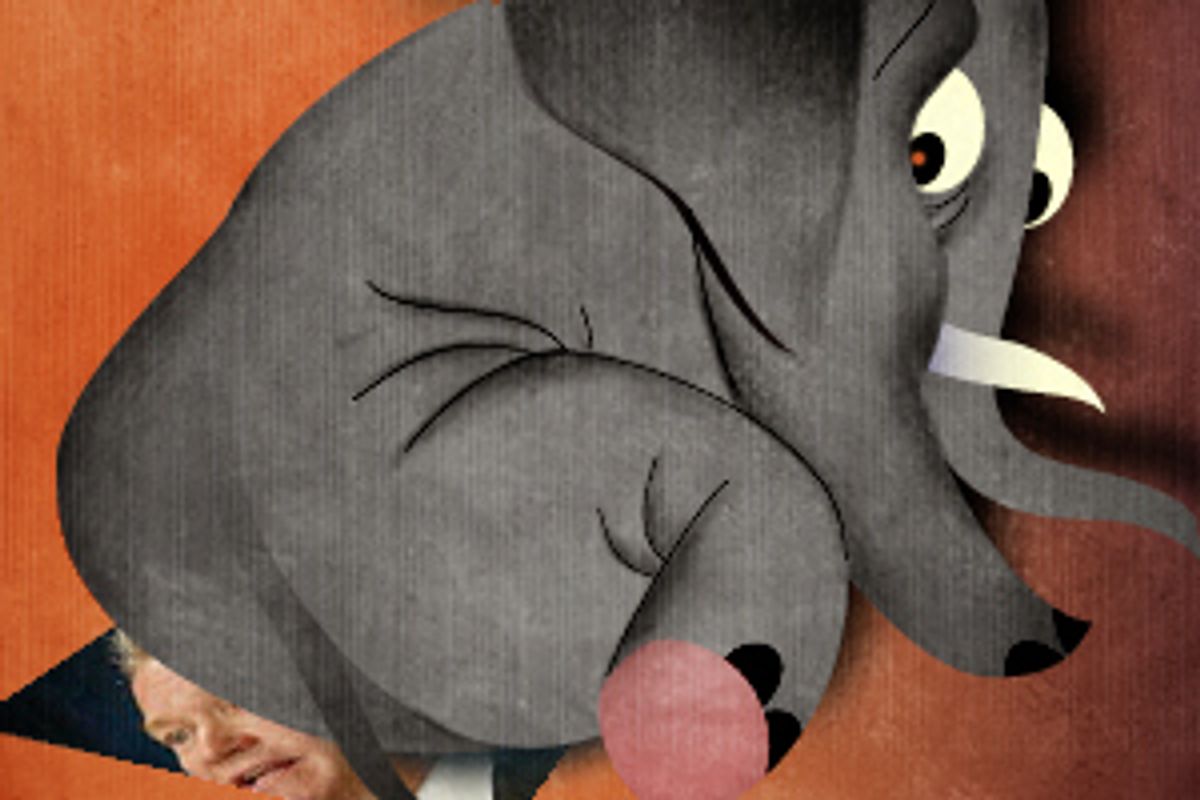 Once again American politics is back where it probably belongs -- wallowing in a made-for-cable political scandal filled with sexually predatory e-mails and a House Republican leadership trapped in their own inept version of "Don't ask, don't tell."

It is too soon to know whether the Mark Foley saga will ultimately be remembered for the crime (the chilling online pursuit of Capitol Hill pages) or the coverup (the failure of Speaker Denny Hastert's team to respond to warnings about an out-of-control Florida GOP legislator). But reading the front-page headlines and watching the breathless TV coverage five weeks before the election, one could glibly assume that the fallout from the Foley frenzy will be the tipping point that will produce a Democratic sweep in the House. Especially seeing the Republicans in full meltdown, vacillating between fetal-position defeatism and a desperate effort to find a scapegoat.

Such sweeping predictions for November, though, are risky. Interviews with strategists and pollsters from both parties suggest the more limited conclusion that this uproar is more apt to help Democrats in individual races than to reshape the national mood. What may matter the most is whether the furor over Foley fits into the story-line that the Democratic candidate in each race has been pushing to the voters.

The most obvious illustration of this comes from the suburbs of Minneapolis, where Democrat Patty Wetterling is running for a vacant Republican-held House seat. Wetterling, who became an advocate for missing children when her son Jacob was abducted 17 years ago, has a life story that underscores the dangers of older men preying on young boys.

Wetterling quickly went up with a hard-hitting 30-second ad Tuesday that begins with ominous music and a voice-of-doom narration: "It shocks the conscience. Congressional leaders have admitted covering up the predatory behavior of a congressman who used the Internet to molest children. For over a year they knowingly ignored the welfare of children to protect their own power."

Republican House members with leadership roles -- even if they had no connection with Foley beyond sharing a House elevator -- may indeed be more vulnerable than back-benchers. A prime example is the race pitting Democrat Chris Murphy, a youthful state senator, against 12-term GOP incumbent Nancy Johnson, who chairs a major Ways and Means subcommittee, in northwestern Connecticut. As Sarah Merriam, Murphy's campaign manager, argues, "Nancy Johnson has been going around the district saying, 'Don't trust this kid. I'm in the leadership and I can bring home the bacon.' And what we're saying is that leadership brings perks, but it also brings responsibilities."

Small wonder that Murphy issued a press release Tuesday demanding that Johnson ask for Hastert's resignation. The Johnson campaign, which has been aggressively attacking the Democratic challenger since April, fought back this week by highlighting isolated votes that Murphy cast in the state Legislature that could -- by the exaggerated standards of TV attack ads -- make him seem soft on the sexual abuse of children.

Despite the rat-a-tat exchanges in this Connecticut race, Murphy may be in a better position than other Democratic challengers in the state to gain ground because of Foley. In the affluent Fairfield County suburbs, Diane Farrell is stressing GOP moderate Rep. Chris Shays' support for the Iraq war. In the eastern part of the state, Joe Courtney has been going after Rob Simmons by stressing the incumbent's ties to Bush. Foley's conduct can only be jammed into the Farrell and Simmons narratives with a shoehorn. In contrast, Murphy has been contrasting his fresh-face appeal with Johnson's long-standing ties to the GOP House leadership from the outset.

Sometimes in the midst of a national scandal, the smallest and most seemingly innocuous item from an incumbent's legislative history can turn into a political gift. In the scorched-earth Albuquerque race pitting GOP Rep. Heather Wilson against New Mexico state attorney general Patricia Madrid, the Democrats discovered to their glee that the incumbent had served on the five-member board overseeing the House page program from 2001 until the end of 2004, a time when Foley had already been suggestively messaging these young boys. That tendentious bit of guilt-by-timing was enough to produce an Albuquerque Journal story Tuesday morning with the headline: "Wilson Denies Prior Knowledge of Foley E-Mails." As Heather Brewer, the press secretary for the Madrid campaign, said in a phone interview: "This is a nightmare for Wilson. She sat on that page board for three years."

Madrid, too, came out with a press release demanding Hastert's resignation. But even without the Democratic grandstanding and the right-wing scorn symbolized by a Hastert-must-go editorial in the conservative Washington Times, the speaker can be assumed to have a very short job tenure. Either Hastert is ousted by a Democratic takeover of the House or, having miraculously held on to a majority, he announces that he is stepping down after the election.

But with the House in recess and most incumbents back in their districts, there is no easy way or obvious need to plan a pre-election coup. As GOP strategist Rich Galen, a former advisor to Speaker Newt Gingrich, said, "I would be absolutely shocked. It goes against everything I know about Washington for Hastert to resign now. But it is certainly possible, maybe even likely, that he won't stand for speaker in January."

Even though pollsters for candidates and the media are undoubtedly in the field asking about Foley, this is a tricky time to be taking a survey. Polls taken in the heat of a ferocious news cycle often produce misleading results, since there is no simple way of knowing whether an after-image of the controversy will linger. "It is certainly easier to get people's attention on Foley than it is on a story about global warming or Hezbollah," said Karlyn Bowman, a polling analyst at the American Enterprise Institute. "But the question is whether this story can hold their attention."

There is also a difference between citizens voicing their disapproval of Foley to a stranger on the telephone reading from a prepared list of questions and these same voters treating the scandal as important enough to dictate their choice for Congress in November. As one Democratic pollster put it, "All anyone is looking for now is what difference this is going to make in actual behavior in November -- and that's a lot harder to measure than perceptions of Foley."

Over the past two weeks, the 2006 campaign has seemingly offered more tipping points than a mobbed playground teeter-totter. First, there was the leaked version of the National Intelligence Estimate that suggested that the invasion of Iraq has created a greater worldwide terrorist threat. Then revelations about the war in Bob Woodward's new book were hailed as the tipping point. Now it is the feeding frenzy over Foley.

Certainly no Republican mouthpiece can claim that a scandal involving salacious messages sent from the House floor to a 16-year-old boy can help the party. On the other hand, these days a GOP spinmaster might have the temerity to argue, "Anything that diverts attention from the president's record in Iraq is a good thing."

OK, maybe that's a bit fanciful -- but the key question here is, how much bad news can the Republicans take? Sooner rather than later the weight of the evidence should tilt the scale against Republican control of Congress. For given the way things are going for Hastert and the White House, it can't take much of a tipping point for the Democrats to get those 15 needed seats.