After all the muck and scandal of the last two years, the ethical watchdogs of Congress have accomplished nothing. Will Foleygate be any different? 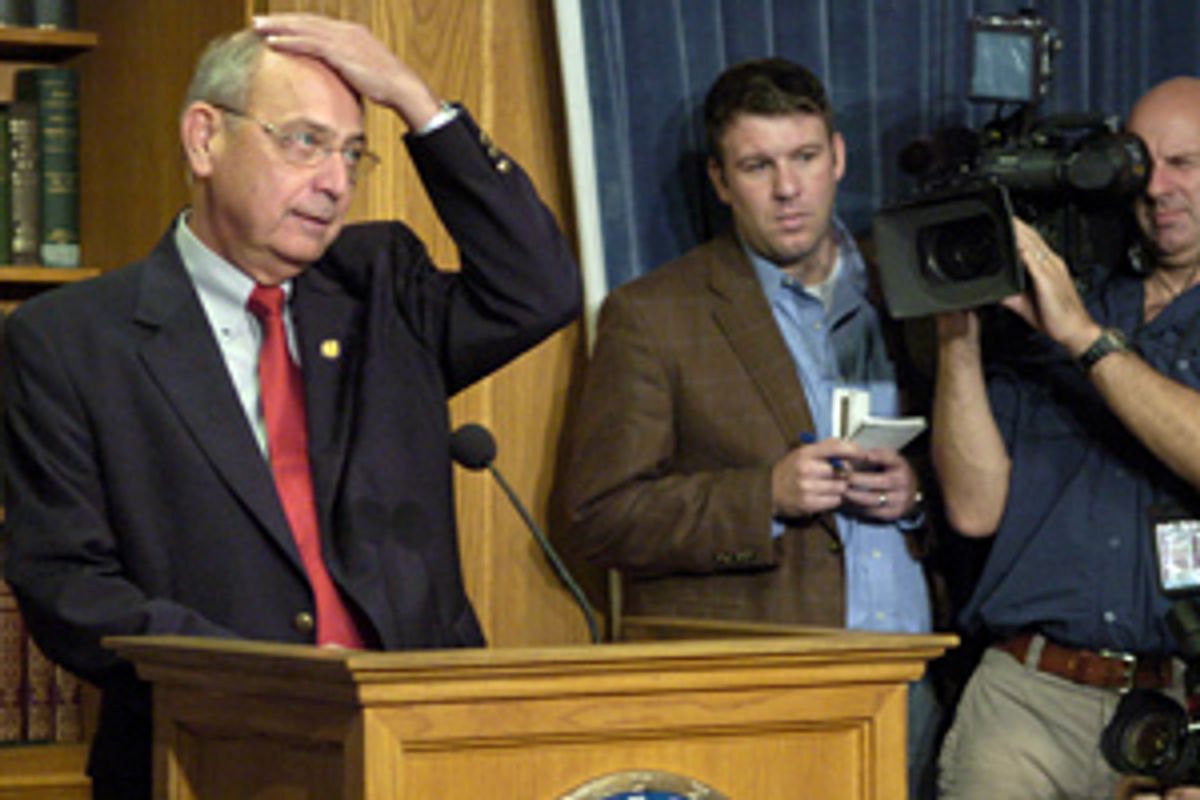 Every day in the bowels of the U.S. Capitol, dozens of adolescent pages drop their schoolbooks and belongings in a private locker room. The unadorned hovel is located off a basement hallway that almost no one else in Congress ever bothers to visit. The floors are polished concrete slabs, not marble. Exposed piping lines the ceiling. The fluorescent lights give everything a greenish, sickly glow.

It is a desolate place, one that is usually avoided by the Beltway press corps, because nothing of note ever happens there. In fact, the only other thing located in the hallway, besides a small post office branch, is the office of the House Committee on Standards of Official Conduct, also known as the "Ethics Committee" -- also known as the room where scandal goes to die.

Over the last two years, three Republican congressmen and two Democrats have been enveloped by ethical scandals. The press has produced evidence that many more violated House gift rules by accepting high-priced meals from lobbyists or improperly reporting travel gifts. The Justice Department has imprisoned one member, California Republican Duke Cunningham, and forced a guilty plea from another, Ohio Republican Bob Ney. Louisiana Democrat William Jefferson still awaits his day of reckoning, after federal agents discovered bricks of cash in his freezer. The fate of Texas Republican Tom DeLay, once the most powerful congressman in America, also rests in the hands of federal prosecutors.

Through all of this muck and scandal, the Ethics Committee has accomplished nothing. For much of the past year, the committee did not even meet. Then, this spring, the ranking Democrat on the committee, Alan Mollohan of West Virginia, resigned after he was accused of enriching himself by steering federal money to his business partners. It has been an understatement to call the Ethics Committee ineffective. It is a laughingstock, a farce, a collection of circus clowns with soda water spritzers who are called on whenever the big top threatens to catch fire.

"I've never seen anything like this before," said the postal clerk, when she stepped into the hallway, to take in the gathered hordes.

Nor, it seemed, had the 10 members of the Ethics Committee, each of whom was forced to walk wide-eyed through a gauntlet of photographers to get to the closed-door meeting. They all refused to comment, and most refused to look up at the press, prompting one sassy reporter to call out, "No love? Not even a smile?" as California Democrat Lucille Roybal-Allard tried to escape down the hallway.

At about 2 p.m., however, the Ethics Committee leadership bent to the press pressure and appeared before a bank of 11 cameras to announce their plans for a full and impartial investigation of the Foley scandal. "We pledge to you that our investigation will go wherever the evidence leads us," announced Doc Hastings, a Washington state Republican, who chairs the committee. This was a hard idea to swallow, given that Hastings' predecessor in the job, Joel Hefley of Colorado, had lost his post in 2005 after he crossed the Republican leadership by recommending ethical sanctions against DeLay.

But Hastings appeared to be trying to turn a new leaf. Just hours earlier, he said, his staff had signed nearly four dozen subpoenas for documents and testimony, as part of an investigation that will reportedly look for wrongdoing among a broad swath of fellow members of Congress, staff and officers -- including, presumably, House Speaker Dennis Hastert. The investigation would be completed in weeks not months, he said, though it appeared doubtful that anything would happen before November's midterm elections.

But Hastings didn't get much further before he tripped himself on his own partisan shoestrings. Just moments after emphasizing his call for a nonpartisan investigation, Hastings told reporters, "I think the speaker has done an excellent job."

"Do you question his leadership at all?" a reporter pressed.

"I don't want to get into that," said Hastings. His staff quickly intervened, giving him whispered advice that forced him to backtrack. "The remark I made regarding Speaker Hastert," Hastings said a few minutes later, "is not related to the matter at hand here." In other words, the Ethics Committee is credible because Hastings has the ability to separate his good feelings for Hastert from his bare-knuckle determination to investigate Hastert.

If the Ethics Committee's investigation carries any credibility at all, it will come from the cooperation of its Democratic members, who appeared beside Hastings. "We all have strong feelings about party, about issues, about philosophy," announced California's Howard Berman, who is the top Democrat on the committee. "But for the purposes of this investigation those feelings are irrelevant."

By the standards of the current scandal, which continues to rile the political world, the Ethics Committee's announcement was an unqualified success. The rest of the Republican leadership was not so lucky. Over at the White House, spokesman Tony Snow was stumbling his way through another damage-control press conference. At one point, he even went so far as to suggest that President Bush did not think the Foley scandal mattered. "You guys write about the Foley scandal morning, noon and night," Snow lectured the press corps. "It seems to me the president is talking about things that matter. I mean, here we are, we've got news on North Korea and Iran and other places." He, too, later backtracked, after he realized his blunder. "You know what really matters?" Snow asked rhetorically. "The kids. That's what really matters."

But the day's most egregious moment of sanctimony came from Speaker Hastert himself, who has been besieged by calls for his resignation. Evidence is mounting that Hastert and other top Republicans knew long ago of Foley's transgressions, and did little to rein him in -- let alone remove Foley from his role as co-chairman of the Congressional Missing and Exploited Children's Caucus. In the early afternoon, Hastert held forth in a rather incoherent nine-minute press conference from his district office in Illinois, during which he announced little new information and offered no real insight on the spiraling story. "I'm deeply sorry this has happened. The bottom line is that we're taking responsibility," said Hastert. That was immediately followed by his denying that he had done anything wrong, and the suggestion that Democrats were behind the current scandal. "Our friends on the other side of the aisle don't have a story to tell," Hastert said. "And maybe they are resolving to another way to -- to -- another political tactic."

For their part, the Capitol Hill pages seemed to be taking the scandal in stride. As they parked their bags in the locker room Thursday at lunch, one eager young man in the page uniform -- blue blazer, striped tie, gray slacks -- stopped to photograph the dozens of journalists who had camped out in the hallway. He said he was taking the photos so that he could show his father what it is like to work in Washington. No doubt the picture he took -- the journalist mob staking out a subterranean hallway -- created an apt portrait of a city once again sunk into the depths by a scandal of its own creation.