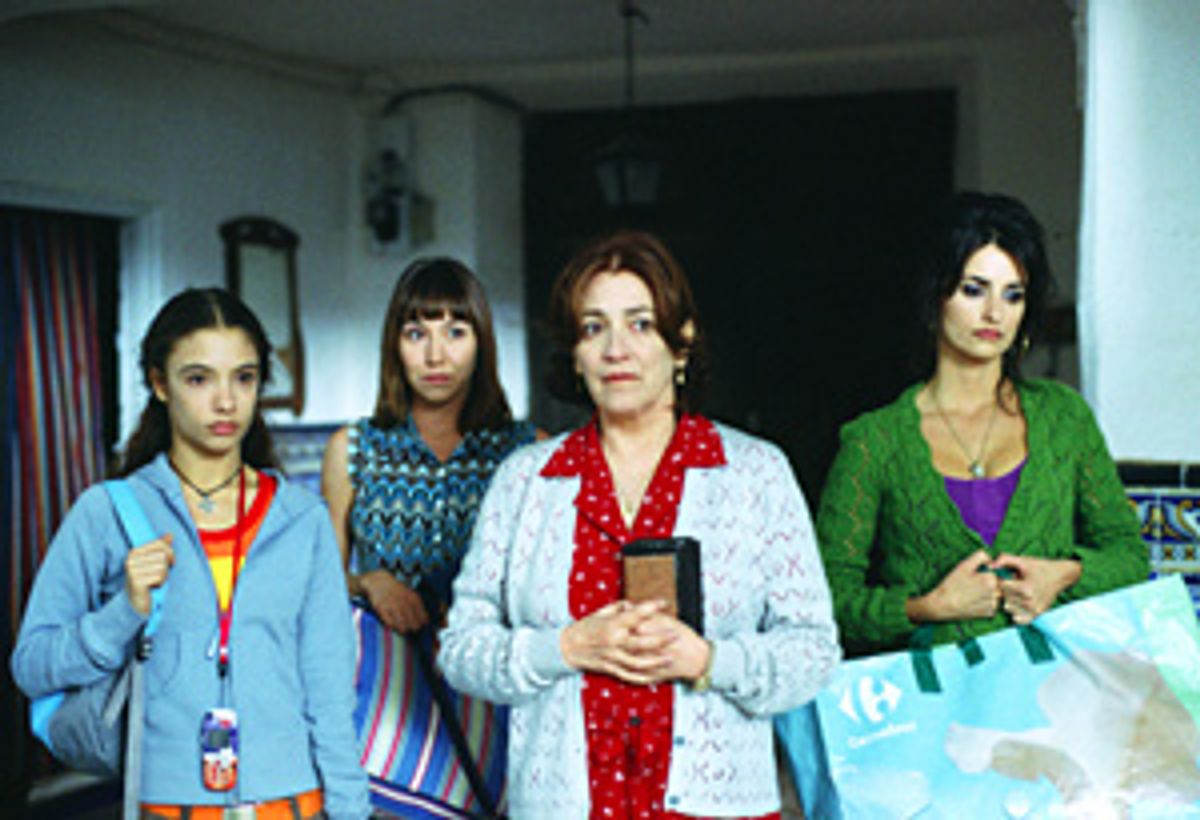 Pedro Almodóvar's "Volver" -- the title means "to return" -- is inspired by the filmmaker's own memories of growing up in La Mancha, a place that to him seemed so hostile to sensuality, so small and mean, that even at age 8 he couldn't wait to escape it. Almodóvar did escape, to the urban vibrance and stimulation that many of us who grew up in small places yearn for, and most of his movies unfold in an urban landscape.

But going back to the familiar is often harder, and scarier, than exploring someplace new, and doing so seems to have energized and inspired Almodóvar: "Volver" -- which plays the New York Film Festival on Oct. 7, and will open in New York on Nov. 3, with other cities to follow -- is part noir-comedy, part ghost story, but it's mostly a potent reflection on how where we come from shapes us, in ways we can't understand until we've been away for a long, long while. Urban converts often talk about the small towns they came from as being "dead," as if they were places where nothing of value can grow -- conveniently forgetting that they themselves "grew" there. With "Volver," Almodóvar affirms, without idealization or misty nostalgia, the stubborn beauty of the place he had to escape (listen to a podcast of Almodóvar talking about the film here). The picture is so full of life that it seems less a product of the imagination than of the soil.

In "Volver," the central character -- the movie's life force, if you will -- is a ghost. She may be a real ghost or a metaphorical one, but the distinction is inconsequential. "Volver" is the story of a family of women, and at the root of this particular tree is a mother and grandmother, Irene (played by the wonderful Carmen Maura): She has two daughters, the tough, capable but somewhat insensitive Raimunda (Penélope Cruz) and the more retreating, eccentric Sole (Lola Dueñas). At the beginning of the movie, we learn that Irene is dead: She was killed, with the girls' father, in a fire, quite a few years ago.

Sole lives alone, with no man in sight; she makes her living quietly as a hairdresser. Raimunda has a 14-year-old daughter, Paula (played by Yohana Cobo, a young actress whose face comes off as both intimidating and vulnerable), and a shiftless husband (Antonio de la Torre). Raimunda is the kind of woman who works herself to exhaustion taking care of her home, husband and kid, although her efforts only make her more beautiful, and stronger: This is, after all, an Almodóvar movie, a romantic, passionate picture informed as much by movie lore as by real life. If Almodóvar looked to Douglas Sirk in "All About My Mother" (although as a filmmaker, he's far wetter and more approachably rumpled than the crisp, buttoned-down Sirk), this time he's casting an eye toward Italian neorealism: "Volver" includes a clip from Luchino Visconti's "Bellissima," starring perhaps the most vital-looking actress of all time, Anna Magnani. And Raimunda's dramatic, earth-mother look -- all hasty, tousled up-do's and swooping eyeliner, none of which is enough to detract from her magnificent cleavage -- is a pure reference to Sophia Loren in some of the roles she played for Vittorio de Sica.

Raimunda and Sole lose their elderly Aunt Paula (played by Almodóvar veteran Chus Lampreave), their mother's sister, who still lives in the small town in which they grew up and who's one of their last links to their mother. Aunt Paula's death is the event that reunites Irene with her children (and grandchild), to reveal secrets and mend rifts -- and that's about as much of the nuts and bolts of the plot as I can safely give you. As with the best Almodóvar movies, "Volver" takes knotty twists and turns, channel-switching from comedy to tragedy with such buttery smoothness that you're rarely aware of the demarcations (if there are any). And again, as with Almodóvar's best movies, what happens is far less important than how it all happens, and how we're swept up in the moods and feelings of the characters.

Almodóvar is at his best when he's writing about, and working with, women. I don't think that gift springs from simply just liking or understanding them (although he clearly does like and understand them). As a writer and filmmaker, Almodóvar never pretends to be one of the girls, insinuating himself wistfully into their world: He's a perpetual outsider, and he's happy to be -- to be around women, to get to talk with them and laugh with them, is better than actually being one, and it affords him an unusually deep level of empathy, one that women don't often have for one another. (He doesn't ignore the ways women can be bitchy -- but it isn't a fixture of his work, either.)

If the performances in "Volver" and in so many other Almodóvar pictures are any indication, actresses must love working with him. (The feeling is clearly mutual.) "Volver" gets its shape and texture from the three lead performances -- those of Maura, Cruz and Dueñas -- and from one given by a fourth actress, Blanca Portillo, who plays Agustina, a neighbor in the women's home village. Agustina is a woman who could never bring herself to leave the village; maybe it would never occur to her to leave. She dresses in dowdy tweed skirts and knee-high nylons, fearful of calling attention to herself, but she also speaks adoringly of her wild-child mother -- "She was the only hippie in the village!" -- who disappeared years ago. Agustina is a symbol of pure kindness who never degrades into being a sap (an indication of the respect Almodóvar has for his characters), and Portillo, with her serious, nunlike face and ultra-cropped hair, plays her with a kind of ironclad sweetness: Her Agustina is the friend you can always go home to.

Dueñas has a serene, open face that verges on being plain, and she's all the more beautiful for it -- her Sole doesn't have Raimunda's flash and fire, but her steadiness gives the movie extra gravity. And Cruz gives a terrific performance here. In the past few years, Cruz has been a tough case. She's seemed self-conscious, stunted and squeaky in so many of her roles, particularly those in American movies. We tend to want our actresses to be cute -- we're afraid of them if they're too beautiful -- and playing cute is the death of Cruz. Almodóvar doesn't ask that of her, and left free to play a knockout overworked mom -- in eyeliner, no less -- she thrives. As dazzling as Cruz is, her beauty never obscures her character's ever-unfolding layers: She shows us that Raimunda's toughness, the thing that has kept her family clothed and fed, has also shut her off, to a degree, from the world.

All of these actresses are essential to "Volver." But it's such a pleasure to watch Carmen Maura in an Almodóvar movie again that she almost eclipses them. Maura appeared in numerous early Almodóvar movies -- including "What Have I Done to Deserve This?" "Matador," "Law of Desire" and "Women on the Verge of a Nervous Breakdown" -- but the two haven't worked together for 18 years. Looking at her face here, it's as if we've never been away from her: That face is still lively, strong-willed, just a little nutso. As the story's prodigal mother -- although the picture is structured so that we can't say definitively whether she's returning to her home, or whether her girls, her life, are being restored to her -- she taps wells of feeling filled with tenderness, regret, ridiculous joy. Almodóvar gives Maura a monologue -- a declaration of her protectiveness as a mother, but also a heart-rending admission of her failure to protect -- that brings the picture to an operatic peak. Almodóvar claims that the movie isn't strictly about his own mother or his own childhood, and that's easy enough to believe: "Volver" has a patchwork storybook quality that makes it feel more universal than obviously realistic. But even beyond that, Maura and her fellow actresses make the movie their own. This is a movie about mothers and children that dispatches with the usual goopy sentiment. "Volver" reassures us that you can go home again -- if only in the movies.