Why Weldon is sinking

Suburban Philadelphia voters have elected Curt Weldon to Congress 10 times. But an 11th remains in doubt for one reason -- he can't escape the Republican taint of the war in Iraq. 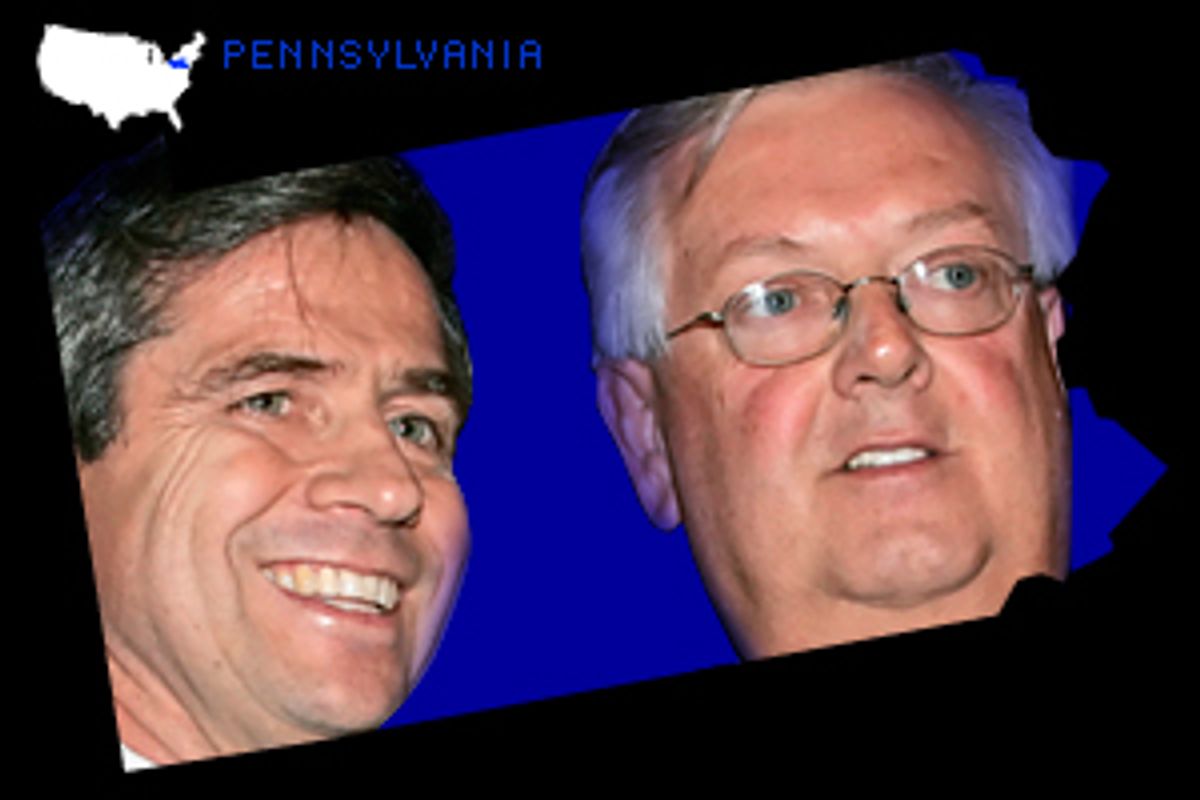 If members of Congress were rated by their eccentricities, and not their electability, Republican Curt Weldon would be a giant among his peers. From his suburban Philadelphia district, he has spent 20 years mapping out his own foreign policy, picking petty fights with the Washington establishment and uncovering intelligence conspiracies that almost no one else believes.

Weldon has undertaken missions to Iraq to find the weapons of mass destruction that the CIA never located. He has launched one-man peace talks with North Korea over the objections of the State Department. He has uncovered a conspiracy to conceal Pentagon information on the Sept. 11 hijackers (discounted by two federal reports). He even wrote a book last year about a discredited Iranian intelligence source, code-named Ali, who fed him details about plans to attack U.S. nuclear power plants.

So no one was surprised when Weldon arrived Friday at the Drexelbrook County Club in a fighting mood. The occasion was his first one-on-one debate with his Democratic challenger, Joe Sestak, a former Navy admiral who recently commanded a Navy battle group in the Persian Gulf, and who has pulled even with Weldon in recent polls.

"It is not easy to fight the government, but you know what? I do it every day," Weldon told the crowd, a bipartisan group of activists and politicos from surrounding Delaware County. "That's why you sent me down to Washington. You didn't send me down there to go along. You sent me down there to fight the battles, whether it's fighting the CIA, whether it's fighting Don Rumsfeld."

His pitch seemed perfectly attuned to these days of political disillusionment. In the midst of an unpopular war in Iraq, a fresh congressional sex scandal, and abysmal approval ratings for President Bush, voters appear to be looking for outsider candidates who will rock the status quo. But at the one time in his career when he would appear to prosper as a free-thinking independent, Weldon finds himself unable to escape the current taint of the Republican Party.

A late September poll by Franklin and Marshall College laid Weldon's problem bare, even before the Mark Foley scandal riled Congress. Although 58 percent of voters in Pennsylvania's 7th congressional district consider themselves Republican, only 43 percent said they planned to pull the lever for Weldon in November. Sestak is an unknown quantity for half of local voters, yet the Democrat was supported by 44 percent of those polled. The numbers were surprising to Pennsylvania political watchers, who note that Weldon has won election to Congress 10 times in a row with more than 60 percent of the vote.

Local political scientists say the suburban district leans to the moderate side of social issues -- a tilt that helps explain the past two presidential elections: Gore carried the district with 51 percent of the vote in 2000 and Kerry won it with 53 percent in 2004. At the same time, experts say there's one overriding reason that voters now favor an unknown admiral over Weldon. "You and I wouldn't be having this conversation if we didn't have the war in Iraq," explained G. Terry Madonna, a professor at Franklin and Marshall, who oversaw the poll. "Sestak wouldn't be running. It would be over."

A third of voters in Weldon's district rate the war in Iraq as the most important issue in the campaign, while another 14 percent say they are most concerned about the U.S. campaign against terrorism. Weldon, who has consistently supported the war as a member of the Armed Services Committee, has tried to address voters' discontent by distancing himself from the Bush administration. "We shouldn't cut and run," Weldon said at the debate. "What we should do is not allow the decisions not to be made by Dick Cheney and Donald Rumsfeld," he said. The president, he continued, should announce a withdrawal plan decided on by the generals on the ground in Iraq.

Such subtle distinctions are likely to be lost on voters. By most accounts, when they look at Weldon they don't see a spirited maverick who bucks his own party, opposes NAFTA, earns the support of local labor leaders and even supports the occasional environmental initiative. They see a Republican incumbent serving in an unpopular Republican Congress. "I am a firm believer that sometimes change is good," said Rick Lacey, who described himself as an independent Republican real estate agent, who had come to watch the debate. "I have a strong belief that we should have term limits."

Weldon's fortunes have been worsened by the national attention that Sestak has been able to drum up for the election. Just a day before the debate, former President Bill Clinton came to town to stump for Sestak, who worked for Clinton as a national security advisor. "I will not make a single stop in this campaign season that means more to me than this one," Clinton declared, according to a front-page story in the Delaware County Daily Times. Sestak has also received support from the Democratic Congressional Campaign Committee and liberal bloggers, who have helped to raise nearly $100,000 for him online.

So far, Sestak has succeeded by appearing affable and competent. The former admiral, who earned a Ph.D. in political economy and government at Harvard, has a stiff but sincere delivery style on the stump, centered around simple, repeatable phrases. "I am not a political careerist, I am a military guy," Sestak said at the debate. He did get in one testy dig at Weldon for his "conspiracy-theory fantasies." A minute later, Sestak addressed the audience and the television cameras with what is turning out be the central question of the 2006 elections. "Why give your vote to a president who has taken you into a tragic misadventure in Iraq?"

With less than 30 days left until the elections, Weldon has yet to find a clear and convincing answer to that question. What he offers instead is a litany of the things he has done for Delaware County in his 20 years of federal service to the district, preceded by his years as a local schoolteacher and volunteer fireman. For decades, this has been enough to assure Weldon's reelection. But times have changed.

This September alone, 776 U.S. troops were wounded in Iraq, the highest toll since November of 2004. Over three days last week, 13 American soldiers were killed in combat in Baghdad. Even if Weldon uncovered a hidden stockpile of Iraqi chemical weapons tomorrow, he still couldn't make voters forget the tragic facts of the war in Iraq.