With the ragtag Lamont campaign at his heels, the incumbent senator's biggest worry may be a long-shot GOP candidate siphoning votes. 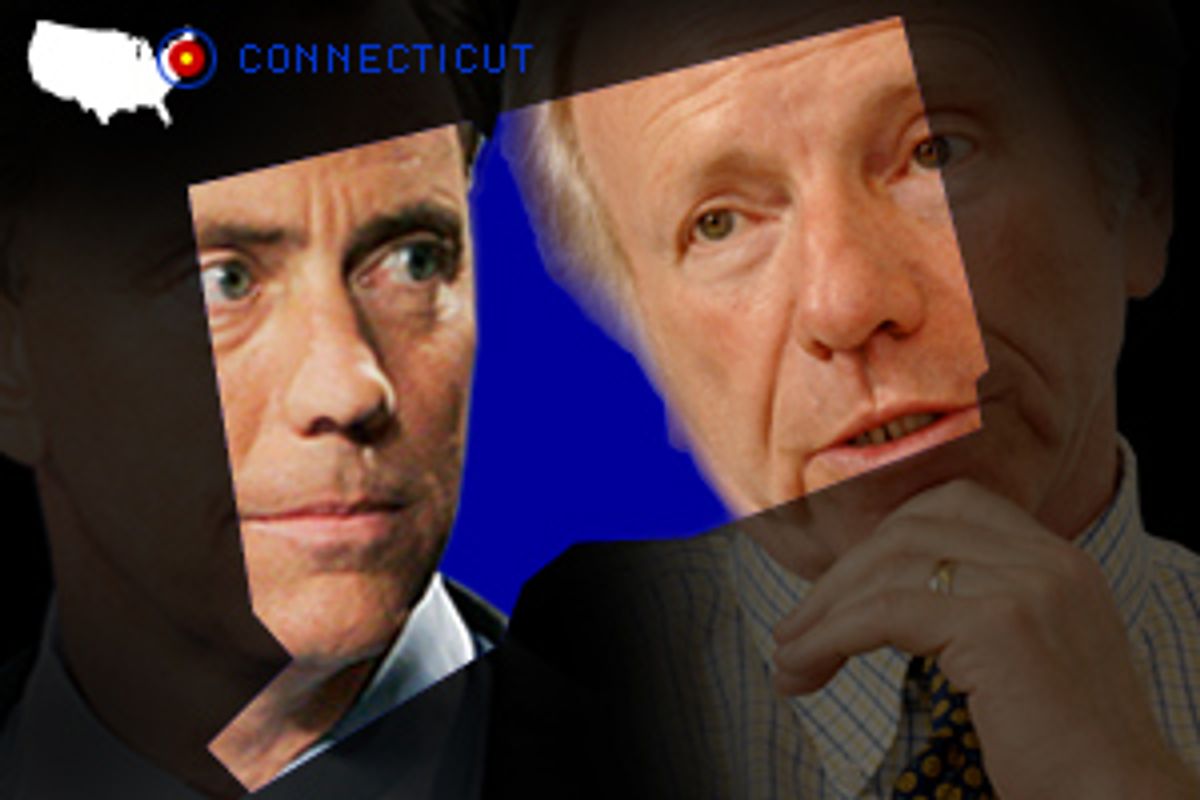 The Connecticut Senate race has produced more plotlines than a shelf of Dickens, more turnabouts than an Alpine footpath and more bitterness than the horseradish industry. The struggle between hawkish incumbent Joe Lieberman (now running as an independent) and antiwar Democratic challenger Ned Lamont has so confounded the expectations of reporters, strategists and passionate voters that it seems like Connecticut is governed by a single statute: the law of unintended consequences.

When Lieberman lost the Aug. 8 Democratic primary by a 52 to 48 percent margin, the expectation was that the three-term incumbent would be chastened by this near-death experience. Instead Lieberman, holding a roughly eight-point lead in recent polls, projects the image of a candidate who feels vindicated to be the first sitting senator in modern times to run as an independent after losing his party's primary. As Lieberman told me during a 30-minute interview last week, "I have a certain sense of personal liberation. I'm on the offensive again. I'm being affirmative, talking about ideas for the future. I'm not being persistently asked about one question -- Iraq."

Lamont, the most high-profile insurgent of the year, who became the hero of the netroots, might have been expected to bask in the glory of running in November as the anointed nominee of the Democratic Party. But even after putting nearly $11 million into the race, Lamont makes no secret of preferring the freewheeling days when he was an up-from-nowhere maverick with little (aside from his own money) to lose in pressing Lieberman on Iraq. "When I was in the primary, I had no party support at all," Lamont recalled in an interview Sunday. "I was my own man and I think everybody liked that. That's how I feel most comfortable. It's what I'm about."

Republican Alan Schlesinger had been considered the nation's most irrelevant major-party Senate nominee, ever since his long-shot candidacy collapsed amid charges that he had been sued for gambling debts and held a high roller's "Wampum" card at Foxwoods casino under an assumed name. Consistently polling in the single digits, Schlesinger held the dubious distinction of sometimes running even with a survey's margin of error. But on Monday in Stamford, Schlesinger came out swinging so lustily (playing up his orthodox GOP credentials, for example, by slamming both his rivals for their liberalism on immigration) that he suddenly held the potential to play spoiler in a three-man race if he could take traditionally Republican votes away from Lieberman. "It's not that Alan Schlesinger will win," said Scott McLean, the chairman of the political science department at Quinnipiac University. "But he certainly could hurt Joe Lieberman."

After the passions of the Democratic primary, the Stamford debate -- the first of three in the next week -- gave off a drowsy whiff. With Iraq, bizarrely enough, only mentioned in passing by the questioners and the candidates, the earnest but self-effacing Lamont and the polished but sometimes petulant Lieberman said little that lingered in memory 24 hours later. In contrast, Schlesinger came across as volcanic as Vesuvius, especially when he complained about the way that his campaign had been buried under a mound of lava in the press: "The media basically said, This Schlesinger, we're throwing him under the bus ... But I'm here to tell you today I'm coming off of that ground. I'm brushing myself off. And look out Ned and Joe, here I come, baby."

With Lieberman winning two-thirds of the Republican vote in the two most recently published polls, a Schlesinger rise from roadkill would inadvertently help Lamont. What is ironic is that Schlesinger also challenged Lamont's mantra from the primaries: Lieberman isn't a real Democrat. During the debate, Schlesinger, the former mayor of Derby, endorsed Lieberman's mainstream Democratic credentials when he said, "On most issues -- other than Iraq -- I really don't see much difference between my friends Mr. Lieberman and Mr. Lamont."

That argument might have helped Lieberman back in July. But now Schlesinger is desperately trying to signal to GOP voters that he is the only true Republican in the race, despite the obvious tilt toward Lieberman by the likes of Dick Cheney, who loudly lamented the senator's defeat in the primary and called him "one of the most loyal and distinguished Democrats of his generation."

During the drive last week from Waterbury (where Lieberman was endorsed by police and firefighters unions) to New Britain (a tour of a Polish-American neighborhood), I asked the senator what was the rationale behind his love-grams from the Bush White House. "I think it has to do with Iraq," he said. "Both a certain appreciation that I stood up to do what I thought was right and, second, I lost a primary because of it." Then Lieberman went on to insist, "No one in the state or national Republican Party has asked anything of me."

Lieberman gave a nuanced answer when I asked the yes-or-no question: Is there any circumstance under which you would not caucus with the Democrats if you are reelected? "The answer is no," Lieberman said, seemingly ending the matter. But then he suddenly opened an escape hatch, "I want to give you a parenthetical because I'm sure that this is not going to happen. If, for instance, the Democrats tried to deny me my seniority, I'd be foolish ..." Lieberman abruptly ended the sentence without ever explicitly voicing his velvet-gloved threat. But he quickly added, "The Democratic leadership and my colleagues on the floor of the Senate, a lot of Democrats, have said to me, 'Of course, we're going to give you your seniority. You're a Democrat.'"

There have not been public threats by Senate Democrats to deny Lieberman his seniority. Having covered Lieberman for more than a decade, I do not doubt his desire to caucus with the Democrats, assuming he does not pay any price for his apostasy in spurning the results of the Senate primary. The folkways of the Senate argue for tolerance, since in a closely divided chamber no party wants to lose a member. But Lieberman, who had cordial relations with his fellow senators until the Lamont challenge, has not offered an ironclad guarantee that he will stay in the Democratic Party in all circumstances.

Lieberman admits that he has been stung by the way that he has been treated since he was beaten by Lamont. "I have not been happy to see some of my colleagues follow the traditional party rules and support the nominee of the primary, even though we had been close and two days before they had been singing my praises." For the 2000 Democratic vice-presidential nominee 2006 has been part of what he calls a "journey" to a place beyond narrow partisanship. "While the Democratic Party is important to me," he said, "it is not as important as serving the public interest as I see it, the interest of the country and even friendship. I'm working very hard to be reelected, but I'm going to remember these lessons."

The Lamont campaign is like a band of rebels who have come down from the mountains but have yet to figure out how to successfully fight in the valley. During the two months since their upset victory in the primary, the Lamont forces have done little to successfully expand their base. Much of August was squandered, amazingly enough, as the Lamont team waited to see if Lieberman would abandon his independent candidacy. This was an implausible notion -- especially since Lieberman may have lost the primary because he had announced that he would be running regardless of the outcome. Asked about this wishful fantasy, Tom Swan, Lamont's campaign manager, replied a bit defensively, "I'm not saying that we believed that he would withdraw. But we needed to give people a chance to talk to him. And remember that it was August and voters weren't paying attention."

Lamont's television ads are unlike those that any other Democrat is running this year, as the strikingly original, but politically ineffective, 30-second spot broadcast earlier this month called "Horror" illustrates. Bill Hillsman, Lamont's Minneapolis-based ad-maker, made his reputation by electing shaggy liberal college professor Paul Wellstone to the Senate from Minnesota and former pro wrestler Jesse Ventura as that state's governor. In keeping with this unorthodox tradition, Hillsman is also working on singer and detective-story writer Kinky Friedman's independent campaign for Texas governor. But while Hillsman is a master at cutting through ad clutter on television, some Democrats grumble that Lamont might be in better shape in the polls if he had run the full round of aesthetically boring, traditional biographical ads introducing the candidate to Connecticut voters. To be sure, Lamont has belatedly started broadcasting this week a conventional commercial labeled "Results" about his business record.

The Lamont campaign has had its share of gaffes. Last week, for instance, a black former state treasurer declared at a Lamont press conference that Lieberman was lying when he claimed that he went south as a college student in the early 1960s to participate in the civil rights movement. Within minutes, the Lieberman campaign produced a news clip documenting the validity of the senator's civil rights record. Lamont then spent the next few days apologizing, including a final round of "I'm really sorry" at Monday's debate.

Over lunch in the college town of Middletown (home of Wesleyan) on Sunday, Lamont conceded his error of inexperience. "Guilty as charged," he said ruefully, adding, "I suppose if I were a trained politician, my ears would have gone up and I would have said this doesn't make sense to me. I would have said something then and there." Moments later, Lamont turned to me, presumably as a veteran political reporter, and asked innocently, "What would John Kerry have done?"

There is a danger in political reporting, though, in getting too caught up in short-term tactics and not seeing the forest for the 30-second spots. It is arguable that even if Lamont had run a flawless campaign since the primary, he would have little chance against Lieberman (a senator with a 51 percent favorability rating in the Quinnipiac poll) in a two-way race. But in a three-way race, with Schlesinger drawing enough Republican support, another Lamont upset is still possible.

Sunday evening Lamont spoke briefly at a spaghetti dinner organized by the East Hartford Democrats. The reception was respectful, even though Lamont is not backed by a united party in these old-line precincts. While state Sen. Gary LeBeau pledged his troth to the Democratic nominee, he admitted that his wife, standing across the room, was not joining him. "I'm a Lieberman supporter," Joanne LeBeau, an elementary-school teacher, said unapologetically. "I recognize that people have criticisms of him. But I feel his level of experience is what we need in Washington."

It is Lieberman's lingering Democratic support, which is running above 35 percent in the polls, that gives him the solid edge in this race. But what is curious is that Lamont's best hope depends on GOP voters deciding that -- despite a year of bitter attacks on the senator from the left -- Lieberman is too liberal and too much of a loyal Democrat to win their votes. For only in Connecticut in the oddball year of 2006 does a Democratic Senate nominee (Lamont) desperately need his Republican rival (Schlesinger) to transcend expectations in order to win.