Twelve-term GOP incumbent Nancy Johnson's fight for survival in Connecticut is emblematic of the Democrats' fate across the Northeast. 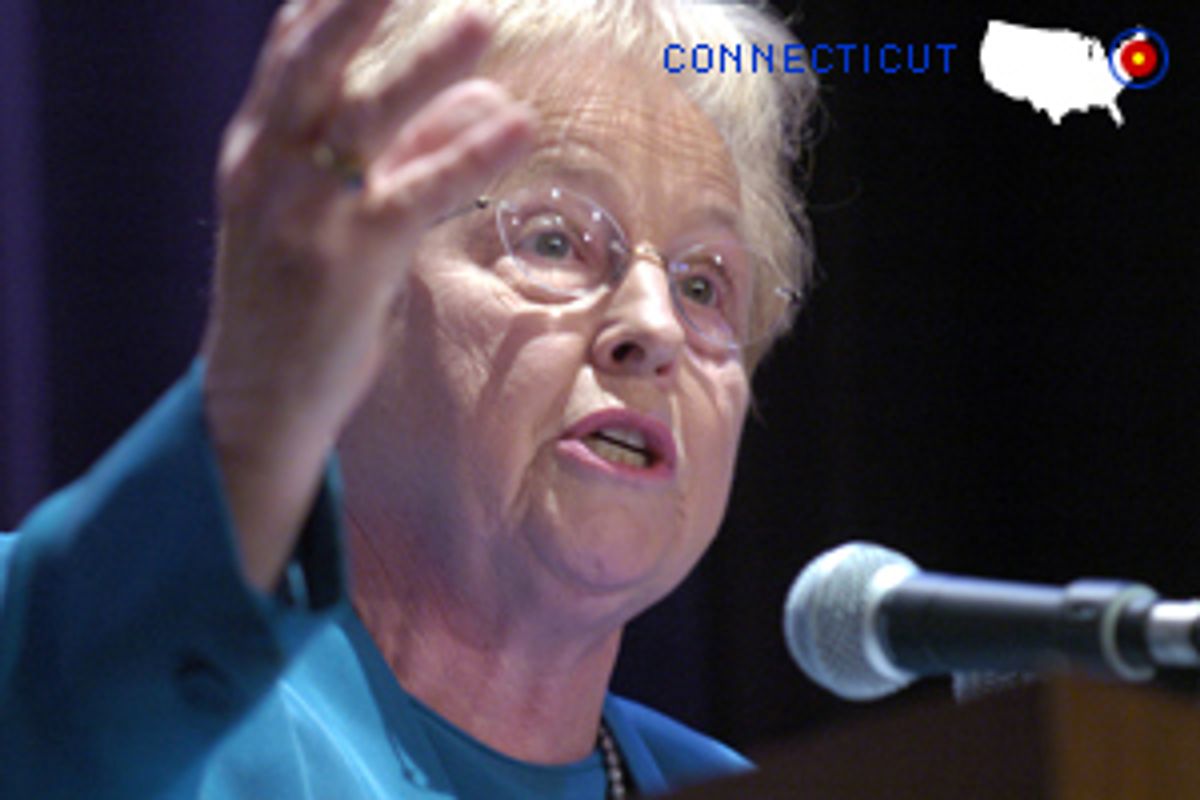 Amid a sea of vituperative politics and unruly passions, Connecticut's 5th Congressional District is a blessed isle of good-government sincerity and above-the-fray bipartisanship. At least, that was the impression that 12-term GOP incumbent Nancy Johnson tried to foster when she spoke to the weekly Rotary Club lunch here in this Republican suburb of Waterbury on Oct. 19.

Instead of talking about Iraq or defending the beleaguered House Republican majority, the 71-year-old Johnson set sail on a stream-of-consciousness tour of her pressing electoral concerns. She hailed a local farm co-op as "a national leader in manure management," she confided her highflying dream of creating "a contiguous songbird reserve," and she affirmed her credo: "If you don't have good arts education, you really don't have anything." Her 20-minute talk was so grandmotherly and noncontroversial that she made it hard to remember that she will be facing a formidable Democratic opponent, Chris Murphy, in November.

That is one side of Johnson, who has prospered in a House district that John Kerry, Al Gore and Bill Clinton all carried, by claiming, as she did to the Rotary, "I've had the privilege of serving in politics in essentially a nonpartisan fashion." But now Johnson's GOP loyalties in Washington and her role in crafting the Medicare prescription drug bill as senior Republican on the House Ways and Means Committee have left her vulnerable to the Democratic tide as voters in the Northeast are poised to vote true-blue for Congress as they have for president.

But there is another side to Johnson's political persona, one that is based on the Karl Rove playbook rather than the high-minded tone of a C-SPAN interview. Johnson -- who had adroitly prepared for a tough race this year even though she romped home with 60 percent of the vote against a weak opponent in 2004 -- aired her first negative commercial back in April when most GOP incumbents were blithely unaware of the dimensions of the Democratic threat. These days, she is blanketing Hartford and New Haven television with vitriolic attack ads that accuse Murphy, a 33-year-old state senator, of "voting to allow sex predators in public housing" and "voting 27 times to raise taxes in Connecticut."

Among the most alarmist ads of this campaign season is one that Johnson aired a month ago, which looked more like a promo for an action-adventure movie than a political commercial. "A call is placed to New York to a known terrorist in Pakistan," the voice-of-doom narrator begins. "A terrorist plot may be unfolding." As the spot moves to its dramatic crescendo, the voice-over misleadingly suggests that "liberal Chris Murphy" would wait for a court order "even though lives may be at stake." The ad's conclusion: "Liberal Chris Murphy. Wrong on security and wrong for America."

There are many parts of the nation where this type of spot may still work, even though this GOP scare-mongering may be losing its potency as the carnage in Iraq replaces memories of Sept. 11 in the minds of voters. But this hot-button style may be too heavy-handed for the affluent areas of New England. Referring to voters in the small picture-postcard towns in Litchfield County in the northwestern corner of the state, Murphy's campaign manager, Sarah Merriam, said, "We've had a particularly negative response from up there about Johnson's wiretapping ad."

This split-personality Johnson campaign -- low-key in person, vicious on television -- is a high-risk survival strategy, but it may have been the incumbent's only choice in an unforgiving political environment. As Johnson's campaign manager, Dave Boomer, argued, putting the best spin on reality, "We've been able to differentiate Nancy from the Washington problem. Voters know that she had nothing to do with [Jack] Abramoff, Tom DeLay and the page scandal."

What makes this race so riveting and so emblematic of the Democrats' fate across the Northeast is that Murphy, like Johnson, has been running a smart, aggressive campaign. The youthful challenger -- who has raised more than $2 million for his run and is one of the favorite candidates of the national Democratic Congressional Campaign Committee -- was still outspent on television by the amply funded Johnson by a margin of 2-to-1 last week. But in the final two weeks of the campaign, according to ad data from Hartford and New Haven stations, Johnson will be spending around $450,000, while Murphy's TV buy will be about $320,000, probably enough to be competitive.

Murphy is currently running a TV ad that tries, jujitsu style, to turn Johnson's presumed strength, her authorship of the prescription-drug bill, into a weakness. The 30-second spot features Murphy talking about the deficiencies of the new Medicare legislation ("My friend John is one of thousands of seniors who are fed up with Nancy Johnson's prescription drug bill") while a lengthy list of Johnson's campaign contributors from the pharmaceutical industry scrolls along the left side of the screen. Then John, the emblematic Medicare recipient, delivers the kicker: "No wonder it's such a raw deal."

Yet, even as Murphy tries to laugh them off, Johnson's scorched-earth tactics have defined this race. Speaking to a friendly audience of about two dozen elderly voters Oct. 19 in the basement of a senior citizens housing complex in Waterbury, Murphy joked, "Some of the ads that Nancy Johnson has run are just over the top. They'll make you think that I love the terrorists and I want to tax everything that moves ... These guys in Washington get their claws on power so tightly that if you try to release their grip, they start attacking as hard as they can."

After the speech, I sat down with Murphy to discuss the ads, especially Johnson's terrorist commercial. "Back here it was a very clear sign to people that Nancy Johnson had changed," he said. "They thought about the Nancy Johnson whom they had elected to Congress in 1982 -- this PTA mother coming from the community. And they can't imagine that Nancy Johnson would have run this commercial. So the tone of her ads has reinforced the notion for people that she has changed."

No one -- not campaign managers, pollsters, political scientists nor reporters -- can confidently predict the outcome in the 5th District beyond the universal expectation that the race will be agonizingly close. A small sign that the Johnson era may be coming to an end appeared Oct. 22 when the Hartford Courant, the dominant newspaper in the state, and the New York Times both rejected their prior support for Johnson's moderate Republicanism and instead endorsed Murphy.

The question that will probably determine the outcome is which side of the two-headed coin called Nancy Johnson will come up on top on Election Day? If voters now see her as a loyal Republican, then her quarter-century career in Congress will have reached its final curtain. But if Johnson has managed to maintain her carefully cultivated image as an independent legislator who cares about "manure management" and "songbird sanctuaries," then she will emerge as that rare-bird Northeastern Republican who survived this year's blue-state backlash.