The president is already signaling he'll disregard James A. Baker III's recommendations for reshaping U.S. policy in the Middle East. But will Baker sit still? 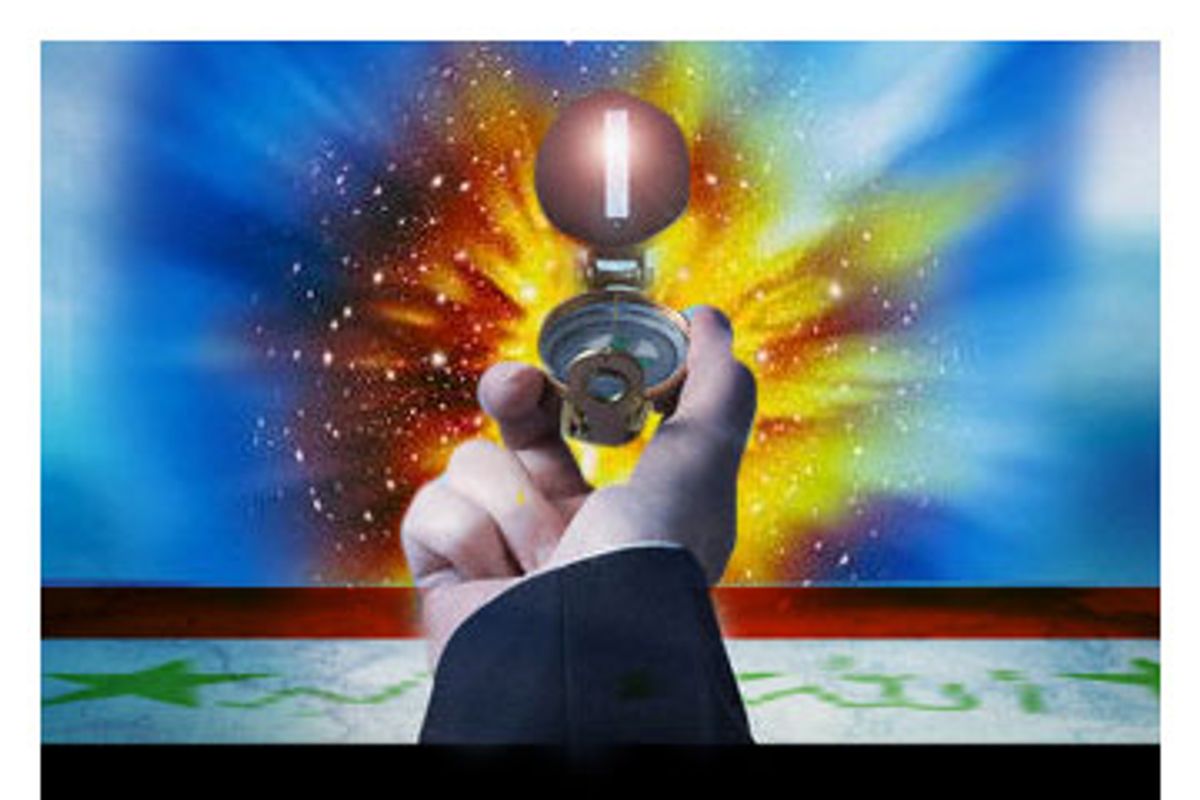 The post-midterm-elections politics over Iraq have already begun. Many serious factors weigh on President Bush's mind as he speaks about his quagmire. Besides the state of the war and the stability of the Iraqi government, the one that he stresses repeatedly and spontaneously is the commission on Iraq policy chaired by former Democratic Rep. Lee Hamilton and, most important, James A. Baker III, the elder Bush's close associate and his secretary of state, who is scheduled to report to Congress and the president after the elections, when, presumably, one or both houses of Congress will fall to the Democrats. A new Democratic House (and perhaps Senate) will be receptive to Baker's proposals. But will Bush?

Baker, the ultimate cold-eyed realist and authority figure who field-marshaled the strategy in Florida that secured the presidency for Bush, has publicly suggested in the past three weeks that he will offer policy changes. Since then, Bush has plunged into rhetorical contortions to explain that he is "staying the course," that he is altering his "tactics" and, finally, that he never said "stay the course." He has adopted the Groucho Marx doctrine: Who are you going to believe, me or your lying eyes or, in this case, ears?

Bush is engaged in a shadow politics of fending off Baker that he can't admit and that require new disingenuous explanations for rejection even before receiving Baker's report. But will consummate political player Baker permit a dynamic in which he is humiliated and join the ranks of the dismissed and discarded, like "good soldier" Colin Powell? If Baker, taking his cue from Bush's rebuke, simply closes ranks, what would have been his point, except to highlight his failure at an attempted rescue? By undermining Baker, especially beforehand, Bush sends a signal that he is determined to maintain his counterproductive strategies in Iraq and the Middle East. Yet his tightening coil will trigger further attempts among U.S. allies and Arab governments to disentangle themselves.

In a small office of the U.S. Institute of Peace in downtown Washington, the Baker-Hamilton commission (aka Iraq Study Group) has been listening to the unvarnished assessments of Middle East experts, former intelligence officers and other government officials, and a host of journalists with experience in the region. Though its report is yet unwritten and none of the witnesses have divulged their testimony, the commission's recommendations are apparent from Baker's statements and those close to him. Baker has made clear that stabilizing Iraq demands a new strategy for the whole Middle East. He favors restarting the peace process between Israel and the Palestinian territories with a strong U.S. hand. And he urges direct diplomatic negotiations with Syria and Iran. "I personally believe in talking to your enemies. Neither the Syrians nor the Iranians want a chaotic Iraq," Baker has said.

"The Iraq situation is not winnable in any real sense of the word 'winnable,'" said Richard N. Haass, the president of the Council on Foreign Relations, who was chief of the Middle East desk of the National Security Council for the elder Bush and director of policy planning in the State Department during President Bush's first term, last week. Haass' views are a surrogate for Baker's, as well as those of Brent Scowcroft, who was the former President Bush's national security advisor and who remains close to both him and Baker.

In "A New Middle East," an article in Foreign Affairs, the journal of the Council on Foreign Relations, and a shorter version of that article in the Financial Times, Haass lays out the outline of the Baker plan that will be presented to Bush. His analysis ruthlessly casts aside Bush's high-flown rhetoric and attributes its emptiness to Bush's failures. He writes:

"Visions of a new Europe-like Middle East that is peaceful, prosperous and democratic will not be realized. Much more likely is the emergence of a new Middle East that will cause great harm to itself and the world.

"The American era was one in which, after the Soviet Union's demise, the US enjoyed unprecedented influence and freedom to act. What brought it to an end after less than two decades? Topping the list is the Bush administration's decision to attack Iraq and its conduct of the operation and resulting occupation."

On Wednesday, Bush held a press conference that can only be interpreted as a preemptive repudiation of Baker. Of course, other motives underlay the press conference as well. It was an effort to repackage Bush's unpopular Iraq policy on the eve of the elections and to demonstrate that he is in charge of circumstances that have careened out of control.

In his remarks, Bush digressed at length to give rote explanations that were elementary, irrelevant or misleading. His supposed admissions of error were attempts at deflecting responsibility. Rather than stating the facts that his Coalition Provisional Authority in Iraq had forced the disbanding of the Iraqi army and the civil service (by banning those with Baathist Party membership, which included nearly every bureaucrat), he passively said, "We overestimated the capability of the civil service in Iraq to continue to provide essential services to the Iraqi people." And: "We did not expect the Iraqi army, including the Republican Guard, to melt away in the way that it did in the face of advancing coalition forces."

Sticking to his Karl Rove-inspired script before the elections, Bush said the word "victory" as often as possible and even explained that if he didn't do that, public opinion would falter: "I fully understand that if the people think we don't have a plan for victory, that they're not going to support the effort." Having given "victory" a cynical signature, he brought up the Baker commission, setting terms for his acceptance of its proposals. "My administration will carefully consider any proposal that will help us achieve victory." As far as can be determined, this "victory" consists of yet to be determined "benchmarks" to be negotiated with the Iraqi government, whose prime minister, Nouri al-Maliki, hours before Bush's press conference, denounced the idea of benchmarks or "timetables."

When Bush was asked if he supported Baker's suggestion of negotiations with Iran, he knocked it down, putting the onus entirely on the Iranians and making any negotiations dependent on their acceptance of U.S.-European demands not to develop nuclear weapons. Baker's idea is not tied to those conditions. On Syria, Bush reiterated his old position and said, "They know our position, as well." Since they already know it, there is no need for the diplomatic initiative Baker proposes.

While giving the back of his hand to Baker, Bush went out of his way to lavish praise on his secretary of defense, Donald Rumsfeld. "And I'm satisfied of how he's done all his jobs," said Bush. "He is a smart, tough, capable administrator." Once again, Bush was deciding in favor of Rumsfeld.

On Tuesday, the day before the press conference, Rumsfeld acted as the blunt truth teller. On Sunday, Bush had said, "We've never been 'stay the course.'" But Rumsfeld called reports about any Bush plan to reverse course "nonsense," adding that "of course" Bush was "not backing away from 'stay the course.'"