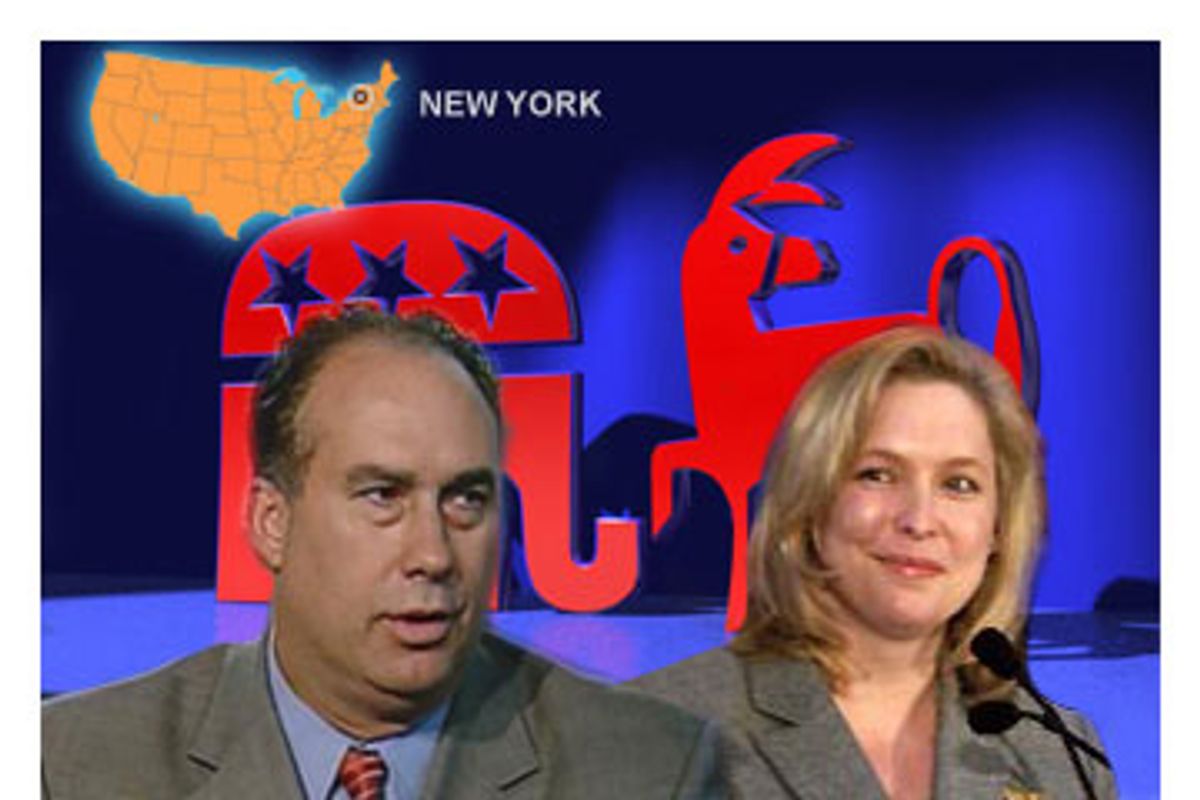 It was a scene out of the worst Republican nightmare. There was a beaming Hillary Clinton, the senator who has replaced Ted Kennedy in GOP demonology, triumphantly telling a packed political rally at the Lakeview Restaurant here Monday afternoon, "It will be wonderful to go back to Washington after this election and be in the majority where we can set the agenda."

This town in rural Rensselaer County is normally too politically insignificant to merit a visit from the likes of Hillary Clinton, despite her ardent courtship of upstate voters. The Democratic county chairman in his introductory remarks claimed, perhaps hyperbolically, that the last campaigning Senate candidate to visit Rensselaer County was a fellow named Bobby Kennedy in 1964.

That Hillary was here Monday afternoon and Bill Clinton turned up at a rally at the Albany airport on Thursday morning has nothing whatsoever to do with the most lopsided Senate race in the nation. Both Clintons -- the most potent two-fer in Democratic politics -- were lending their star power to first-time congressional candidate Kirsten Gillibrand, a 39-year-old antitrust lawyer, who has managed through an early start, potent fundraising and a polished campaign to be running a competitive race on some of the most loyal Republican turf in the Northeast.

In the unenviable vaudeville slot of following the headliner (Hillary), Gillibrand first hailed Sen. Clinton as her "role model," a claim underlined by the fact that both women sported black pantsuits and frosted blond hair. Then, to a receptive audience of 250 party activists, Gillibrand made a liberal lawyer's case for change in Washington. "We have a president who has spent the last two years consolidating presidential power," she declared, "and he has done it at the expense of our democracy." Gillibrand denounced presidential signing statements, NSA warrantless wiretapping and no-bid contracts for Iraqi reconstruction. Much of her 13-minute speech was nearly identical to the pitch that Gillibrand made Monday morning in New York City as she collected $40,000 at a breakfast fundraiser at a blue-ribbon midtown law firm.

New York's 20th Congressional District -- which stretches more than 200 miles along the Hudson River from the Franklin Roosevelt homestead in the south to Lake Placid in the north, veering into the Albany suburbs but avoiding all major cities -- was engineered to be a safe GOP haven. There are almost as many registered Republicans in the district (198,000) as Democrats and independents combined (222,000). George W. Bush carried the district twice, most recently with a comfortable 54 percent of the vote. Four-term incumbent John Sweeney, 51, won his prior three elections by 2-to-1 margins over hapless Democratic candidates who barely raised enough money to pay for hand-drawn lawn signs.

But these days, both the Democratic Congressional Campaign Committee and its Republican counterpart are investing heavily in TV ads in the district, which is the best indicator that both sides consider the race close. As in most House races, the published poll results here are confusing and probably not a reliable barometer for Election Day. Siena College released a survey last week showing Sweeney up 53-to-39 percent with a 4 percent margin of error. Two recent Democratic Party polls, released to the press, give Gillibrand a small lead.

So why is Sweeney's hold on the district so threatened -- and what does that say about the volatile politics of 2006? Maybe that just as the South first began voting in lockstep fashion for Republican presidential candidates and then a decade later started electing an overwhelmingly Republican congressional delegation, the reverse may now be happening up north. The Northeast has been nearly solid blue in the last four presidential contests (John Kerry carried every state in the region in 2004). The race in the 20th District suggests that a full-ticket shift to the Democrats may be under way even in rural, upstate New York.

In some corners of the Northeast, only the quality of the candidates is holding the Democrats back, most notably in Western New York, where quirky 73-year-old businessman Jack Davis could not be a weaker challenger to tainted incumbent Tom Reynolds. In the Sweeney district, quality seems to be exclusively a Republican issue.

Two headlines from the Albany Times-Union convey the extent of Sweeney's woes. Here is a hard-to-spin, legislator-in-trouble classic from April: "Sweeney denies being drunk at frat party -- Congressman says Democrats trying to make an issue of event." (What is indisputable, based on photographic evidence, is that Sweeney was at the Alpha Delta Phi house at Union College after midnight on a weekend with a feeling-no-pain look on his face.)

Then last week the Times-Union stoked the embers of a famous but fading congressional scandal with this front-page story: "Sweeney trip in question -- Visit to U.S. territory with Jack Abramoff associate possibly broke rules." (The newspaper discovered that a 2001 Sweeney junket to the Northern Marianas Islands with Abramoff sidekick Tony Rudy should have been disclosed on the congressman's ethics forms.)

Democrats have made Sweeney's scruples the subject of attack ads, and Gillibrand has also demanded that Sweeney list all his "run-ins with the law," a reference to a questionable late-night traffic accident in 2001. Yet the 20th District is so reliably Republican that the frat-house follies and the unearthing of a link to a convicted lobbyist would ordinarily not be enough to jeopardize Sweeney's congressional career. The two other ingredients in the mix are Bush and Iraq -- a potent combination that plays into Gillibrand's constitutional-law lament about the death of checks and balances in Washington.

After the speech in Sand Lake, Gillibrand and I chatted over coffee and dessert (which a loyal Democrat from an adjoining table insisted on ordering for the candidate and her party) in the downstairs portion of the restaurant, suddenly quiet after the departure of hundreds of rapturous Clinton fans. I asked Gillibrand to explain why she did not mention the corruption issue and Sweeney's ties to lobbyists in her political pitches. "In today's events," she said, "I really felt it was more important to talk about what my vision for change was."

Seconds later, I tried again by asking how much of the contest is national (Bush) and how much is local (Sweeney and his discontents). "Half of this race is about the need for a new direction in our government, accountability and the restoration of checks and balances," Gillibrand said, almost unconsciously parroting the words of her stump speech. By the time she got to "putting the priorities of the middle class first," I too was running on autopilot. Finally, Gillibrand returned to the question by saying, "The second half of the race is about the congressman himself and his voting record." Then Gillibrand veered off again into a discussion of Sweeney's votes on veterans benefits before ending with a brief reference to the incumbent's failure to provide "ethics and accountability."

Part of the problem with interviewing Gillibrand (or Sweeney had he been available) at this stage of the campaign is that any question is seen as a potential minefield that could end up in an opponent's attack ad. Gillibrand can be insightful and spontaneous when the tape recorder is put away and the conversation is labeled off-the-record. She has the easy poise of a high-powered attorney -- she is a partner in the same firm as David Boies, Al Gore's lawyer in the Florida recount -- but also a certain earnestness. Occasionally, the real person shone through during our formal interview, such as when Gillibrand admitted her astonishment that voters began flocking to her at public events after she began running TV commercials. "If I could give advice to any candidate, it's put your ads up early," she said. "When I went to those county fairs [over the summer], people didn't necessarily want to meet me because I was a candidate for Congress. They wanted to meet me because I was on TV."

Sitting in Washington, it is easy to label this race an Abramoff-related contest because of the incumbent's ties to the lobbyist. But in the district itself, Sweeney's 2001 trip to the Northern Marianas has far less vote-getting potential than the congressman's involvement in a penny-ante scandal involving Lake Placid. Sweeney had arranged for dozens of lobbyists who had been active in his campaigns to attend a promotional ski weekend at Lake Placid paid for by a New York state government entity.

"I think it really affected the voters," Gillibrand said, "because it was about their taxpayer dollars being spent for the congressman to have a luxury getaway weekend for his friends and family... It's real because it's local. People know where Lake Placid is. They've been there many times."

Another oddity of the race is that the two candidates have never really met, dealing with each other instead as abstractions. As Gillibrand explains it, their only two encounters were at a county fair over the summer (neither of them got within hand-shaking distance) and at a charity event for the racetrack workers at Saratoga. Sweeney, in keeping with the above-the-fray tradition of front-runners never deigning to acknowledge their foes, has refused to debate Gillibrand.

Instead, this is a campaign built around dueling TV ads on Albany stations where the airtime is comparatively inexpensive. Perhaps the strongest indication that Sweeney knows that he is in trouble came with the airing this week of an ad in which the scandal-scarred incumbent speaks directly to the camera with his wife at his side. Sweeney, whose face has become puffy in response to the steroids that he is taking to reduce swelling in his blood vessels, declares, "My opponent's campaign is in the gutter. Gillibrand and her liberal allies have attacked me and intimidated my wife, smeared my children with negative fliers and lies."

Even by the standards of scorched-earth campaigns, it is hypocritical for Sweeney to cry foul. His team has run a series of attack ads going after Gillibrand's grandmother (a legendary matriarch in local Albany politics), her father (a state-government lobbyist) and her husband (for owning stock in a defense contractor). But the bigger irony is that John Sweeney, a four-term House insider with once glowing career prospects, is fighting for his life in a district that seemed as reliably Republican as... well... the Congress itself.