What we have done to the Iraqi people can never be undone. But there is one small gesture we can make: Apologize. 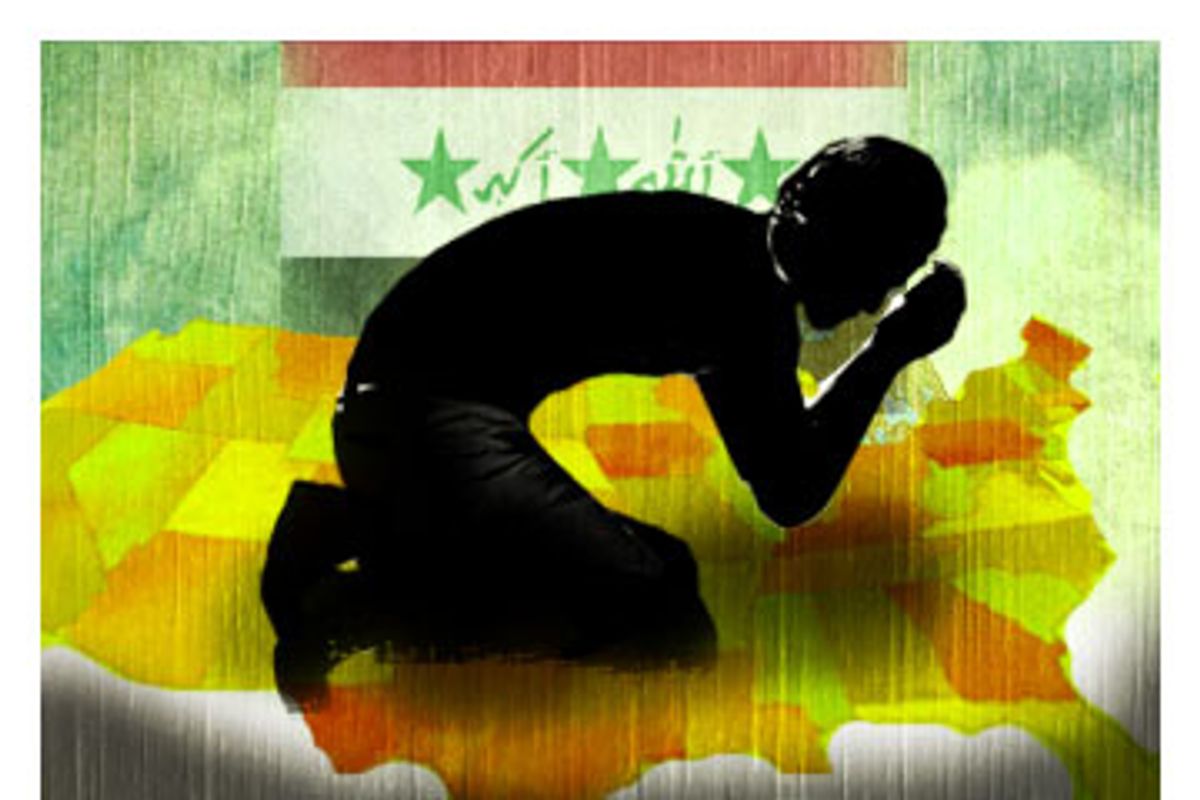 Americans are feeling many emotions about Iraq these days. There's anger. There's sadness. There's despair, and vindication, and fear. But largely forgotten is the quietest, but most necessary, emotion of all: shame.

When we chose to invade Iraq, we made ourselves morally responsible for the consequences. This was not a debt we wanted to think about. And until the last few weeks, it was possible to repress it, by clinging to the hope that things would somehow turn out OK. That hope has now been dashed. Whether we stay or leave, Iraq is not going to be OK. And all we can do is watch as the deadly consequences of our folly, our rashness, our stupid self-righteousness, our inexcusable imperial hubris are visited on thousands of men, women and children -- only a minuscule fraction of them those "terrorists" we were supposedly attacking.

There is an old Arab proverb: "Better a thousand days of tyranny than one day of anarchy." It is not an inspiring sentiment, but perhaps there is a reason for it.

A recent study conducted by Johns Hopkins researchers and published in the Lancet, the respected British medical journal, estimates that the war has so far caused between 400,000 and 940,000 Iraqi deaths. Even if the actual number of deaths is only half of the low Lancet estimate, it would mean that we are responsible for an appalling bloodbath. Yet as Editor & Publisher's Greg Mitchell noted in a recent column, the U.S. media has displayed little interest in trying to confirm these figures, and appears rather uninterested in them. "The sad truth is: People who don't want to face this sort of death toll won't ever want to face it," Mitchell wrote.

In fact, none of us want to face it. Or face the indisputable fact that hundreds of thousands of Iraqis are fleeing their homes, vast numbers of them leaving the country altogether -- creating the greatest refugee crisis in the world. We cry over tsunami victims, but we callously ignore the Iraqi victims of a war we started. Instead, we argue, we point fingers, we carry on with politics as usual.

But politics as usual is a mask for moral indifference.

I was reading the Iraqi blogger Riverbend last week. If you don't read her, you should. As Anthony Shadid did in "Night Draws Near," she puts a human face on this war. It hurts to read her. Riverbend had not posted for months, and explaining her long absence, she wrote, "It's very difficult at this point to connect to the internet and try to read the articles written by so-called specialists and analysts and politicians. They write about and discuss Iraq as I might write about the Ivory Coast or Cambodia -- with a detachment and lack of sentiment that -- I suppose -- is meant to be impartial. Hearing American politicians is even worse. They fall between idiots like Bush, constantly and totally in denial, and opportunists who want to use the war and ensuing chaos to promote themselves."

Riverbend's words were a painful reminder that while we Americans argue about Iraq, she and 25 million other Iraqis have to live there. And her comments on the Lancet study are worth more than a hundred braying debunkers: "We literally do not know a single Iraqi family that has not seen the violent death of a first or second-degree relative these last three years."

Think about every single family you know. Then subtract a brother here, a sister there, a father here, a cousin there, a grandfather here. This is the reality that we have created in Iraq.

I have sometimes imagined what it would feel like to be a drunken driver who smashes into another car and kills a family. Every day you would wake up, take a shower, make coffee, sit down to read the paper. It might take a while to remember what you did, but sometime in the morning you would. And then the shadow would fall. The shadow of knowing that you have no excuse. Of knowing that you took human lives. Of knowing that this will never, ever go away, that you will have to live with it forever.

This is the shadow we now live under because of Iraq. We did it. We can't undo it. And we will never be able to make up for what we've done.

Our guilt would be somewhat mitigated, or at least easier to deal with, if there had been any real reason for this war. All wars are terrible, but some are justifiable. This was not. It was a frivolous war, perhaps the most abstract, pulled-out-of-thin-air war ever launched by a world power. It was dreamed up by hollow men who had never experienced war themselves, who made the decision as if playing a board game, and were supported by people who convinced themselves that the world was a board game.

To be sure, some war supporters had good intentions. But that does not exonerate them. If you start a war for no reason, you have to be right about the outcome. You don't have the option of being wrong.

The war supporters' good intentions were to get rid of Saddam Hussein, one of the great monsters of our time, and improve the miserable lives of the Iraqi people. These were laudable sentiments. I was bitterly opposed to the war, but I allowed myself to celebrate the moment when he fell. I thought it was inhumane and dogmatic not to celebrate the downfall of such a dreadful dictator, even though I feared what would happen next. But it turns out that I was wrong to celebrate.

Former weapons inspector Hans Blix says that Iraq today is worse than under Saddam. And Blix is not alone. More and more ordinary Iraqis are saying this. "Before, we were suffering under Saddam, but now there are many Saddams," the Iraqi writer Hamid Mokhtar despairingly told Salon reporter Phillip Robertson. In a devastating recent article in the New York Times, Sabrina Tavernise described what amounts to the psychological collapse of an entire nation. Iraqi women told Tavernise that they had given up the simple pleasures in life, or were no longer able to enjoy them. "Life was also hard under Saddam Hussein, the women pointed out. Plans were equally impossible to build. But the basic fabric of life, visiting family, attending weddings and funerals, was for the most part intact. Now Iraqis are letting go even of those parts."

It is true, of course, that everything happening in Iraq today might have happened anyway. After Saddam passed from the scene, there could easily have been a civil war. But this does not relieve us of our responsibility. Because we don't know if that would have happened or not. And we do know what our war has done.

In his admirable book "What We Owe Iraq: War and the Ethics of Nation Building," written in 2004, when Iraq's nightmare was on the horizon but had not yet fully arrived, Noah Feldman warned Americans that we must do everything in our power to ensure a positive outcome in Iraq. "Removing security guarantees would mean allowing something that would closely approximate anarchy," Feldman writes, "-- a product, let me remind you, of our own choice to invade." He pointedly notes that a failed Iraq would "be a humanitarian disaster almost entirely of U.S. making."

Feldman's book makes an unassailable moral argument: Whether you agreed with the war or not, once it started America incurred a moral responsibility to the Iraqis. Early on in the war, this idea came to me in a very strange way. Walking down the street one day, I had a sudden, piercing feeling that the Iraqis had become our children. I know this sounds paternalistic and condescending, but I didn't intend it that way. The fact is that the Iraqi people had been shattered by Saddam's tyranny, by the inconceivably bloody war with Iran, by the crippling U.N. sanctions; they were in no position to walk without help. When we smashed into their country, we in effect became their temporary guardians. We were responsible for their well-being. We needed to raise them, take care of them, until they could take care of themselves. And we failed them. This is a deeply shameful feeling.

And it was not only Iraqis we failed. We failed Army paratrooper Sam Ross, from Dunbar Township, Pa., who lost his eyes and his left leg below the knee when a bomb exploded in Baghdad. He was 20 years old. There are thousands of other Americans who have been as grievously hurt as Sam Ross, and more than 2,800 who will not be coming home. And for what? To invade a country that had done nothing to us, and to open a Pandora's box of death and devastation that may have cost half a million lives and isn't over yet?

What can we do about this? We have no vocabulary for it, no moral compass. What do you do when you have incurred a debt so great it can never be repaid?

In 1997, after a Jordanian soldier killed seven Israeli schoolgirls who were visiting a nature reserve, the late King Hussein knelt, weeping, before each of the girls' parents as a sign of his sorrow, his responsibility and his shame.

Protest marches mean little now. Anger can be expressed on Nov. 7. But we need to express our shame.

I would like to propose a national day of apology. On this day, all Americans, those who supported the war and those who did not, will come together without rancor and apologize to the Iraqi people for what we have done. It will be a day without politics, without anger, maybe even without words. A day simply to say we're sorry. And to say it, figuratively or literally, on our knees.

In one of Riverbend's blogs, I came upon this Arabic phrase. "Baqiya ib hayatkum Akhir il ahzan" It is a formal statement of condolence. She says it means, "May this be the last of your sorrows."