Opera's romantic new pop stars are as big as Timberlake -- and as authentic as Fabio. 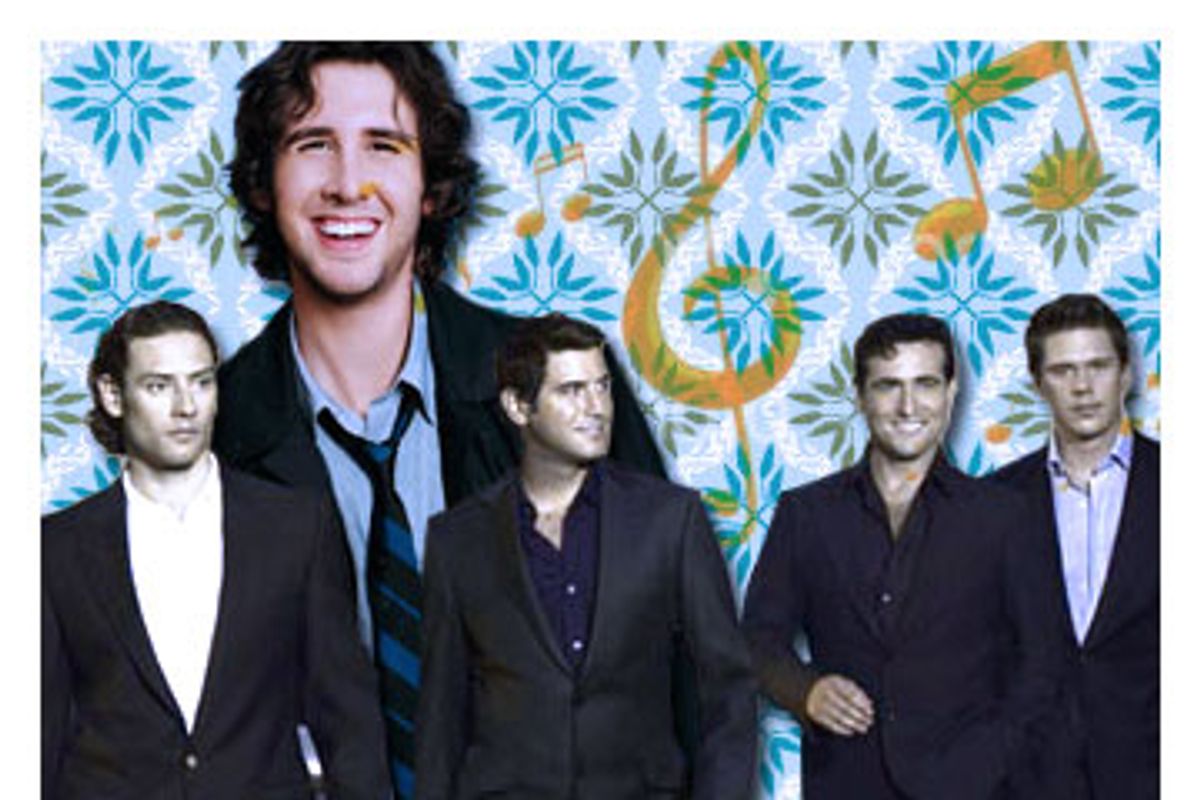 Fans of lightweight schmaltz have more to be thankful for this holiday season than endless reruns of "A Christmas Story" and Adam Sandler's "Hanukkah Song": Il Divo and Josh Groban are back with new albums.

And lest you think the recent arrival of Groban's "Awake" and Il Divo's "Siempre" comes as good news to only a niche group of opera-lite fans, think again. These poperatic pretty boys may well have more festive holiday seasons than just about any recording artists with new albums -- Groban's output since the beginning of the millennium has outsold megastars like Justin Timberlake and Beyoncé, and boy-band Il Divo is not far behind.

That's because Groban and Il Divo are the latest in a long and increasingly diluted line of popular operatic entertainers like the great Caruso, Mario Lanza, the Three Tenors and, most recently, Andrea Bocelli. Arresto! That claim isn't as ridiculous as it appears -- the aforementioned legends were not above injecting a little cheese into their art. One listen to Lanza singing "just one breath of spring from the air/ and I'm feeling strong as a bear" on a bit of trumpet-blasted soundtrack pap like "Boom Biddy Boom Boom," or Luciano Pavarotti making a mess of "Singin' in the Rain" with his wobbly English on "The Three Tenors Live in Concert," suggests that the distance between those acclaimed performers and the Chef Boyardee version of opera being peddled by Groban and Il Divo is not as far as it looks.

Even Caruso, a mythic figure of opera, was himself a popular star, and not just a hero of the cultured classes. In 1902, he was the first performer to sell a million copies of a record with his rendition of the "Vesti la Giubba" aria from "Pagliacci." Key to his appeal was his persona of a fiery Neapolitan lover; the notorious bum-pincher was known, particularly later in his career, for his outsize appetites -- gustatory and otherwise. It's no surprise that he scored his biggest popular success with "Vesti" -- the rafter-rattling aria is as crowd-pleasing as opera gets.

Born in 1921, the same year that Caruso died, Mario Lanza was the next mass appeal opera star, and an even more obvious template for the current generation of popera pups. Lanza, a trained opera star, wholeheartedly embraced the image of the lusty tenor -- portraying Caruso in a 1951 biopic and bragging of his own weightlifting and boxing prowess -- before his premature death of an embolism at age 37. He was frequently criticized for his overuse of the "Caruso sob" -- an exaggerated groaning and sighing employed to ratchet up the pathos. It might have made the critics squirm, but it made the girls scream; Lanza scored film hits with a series of tailor-made melodramas throughout the '50s, and felt no compunction about applying his booming tenor to wild, wobbling, lightweight dross like the million-selling "Be My Love," possibly still the most spectacular example of popera cheese ever recorded.

But even with Lanza's crazed interpretations, opera was well on its way out as a popular style, as the younger public turned to rock 'n' roll, and older fans were seduced by the silky-smooth stylings of Johnny Mathis or the crooning of Sinatra. The peculiar genius of Il Divo and Groban is that they've managed to split the difference between the crooners and the bombastic belters. Groban and Il Divo look like Mathis sounds -- wispy, delicate, smooth -- but their voices pack a ballsy, operatic punch. In an era when the hairy machismo of latter-day sex symbols like Tom Jones and Engelbert Humperdinck seems more campy than sexy, Il Divo and Groban -- skinny, cleanshaven, tousle-haired -- have turned everything inside out; their voices provide the masculine charge that their handsomely non-threatening physiques deny.

Under the watchful eye of adult-contemporary super-producer David Foster (Whitney Houston, Celine Dion, Toni Braxton), this combination has proven massively successful for the 25-year-old Groban, who has sold a remarkable 11.6 million records since his 2001 self-titled debut. To put this into perspective, Bruce Springsteen -- another artist who's released three new, non-compilation albums this decade -- has sales figures that don't total even half of Groban's. The doe-eyed Californian has also proven to be a massive live draw as well; his last large-scale tour, in 2004, earned more than $28 million.

Il Divo, a cosmopolitan quartet of four nattily attired young men (American David Miller, Frenchman Sebastien Izambard, Swiss Urs Buhler and Spaniard Carlos Marin), were brought together by the Geppetto of pop, "American Idol" bad boy Simon Cowell, who says he formed the group to reach "20- to 50-year-old women" who are "too intimidated by opera to go and see it but who love the romance of the music." So far, Cowell's plan has worked out. In the United States, Il Divo's eponymously titled debut was certified platinum, and scored even bigger success overseas, where it racked up sales in excess of 5 million copies and went to No. 1 in 13 countries. The sophomore effort, "Ancora," hit No. 1 on the Billboard charts when it was released earlier this year, dislodging Jamie Foxx. They have sold 2.9 million records -- and may be just the first wave of popera boy bands, as groups like Amici Forever, G4 and the Ten Tenors have sprung up to try to grab a share of the market.

The success of Il Divo and Groban -- or perhaps that of Cowell and Foster -- is largely due to their ability to retain the patina of operatic sophistication without actually performing opera (and, of course, looking good in the process). The formula, particularly in regard to Il Divo, is almost crassly simple. First, pick a cottony pop hit, then change its language (Italian works best). To wit, the debut album's "My Way" becomes "My Way (A Mi Manera)," "Ancora's" "I Believe in You" becomes "I Believe In You (Je Crois En Toi)," "Siempre's" "Nights in White Satin" becomes "Nights in White Satin (Notti Di Lucce)," and so on. Then add the "European" sounds of Spanish guitars and soaring strings. The icing on this sickeningly sweet cake is, of course, the singing itself: the seductively rolled "Rs," breathier vocal tones for the verses, barely restraining the passion that inevitably comes exploding out in the form of ringing, full-throated vibrato during the choruses. If romance novels could sing, they'd sound like Il Divo.

Groban has a slightly more modern style. He too is prone to foreign languages, though he's more likely to slip in some French or Spanish in addition to Italian. Groban is also less reliant on transforming preexisting pop hits, relying more on the work of professional songwriters for fresh material (Groban often garners a co-writing credit). Though he shares with Il Divo a reliance on romantic signifiers (strings, Spanish guitars), modern synthesizers feature much more prominently in Groban's music -- an army of them often rushes in to spirit his admittedly impressive baritone up to the heavens when a song arches toward its crescendo.

"Believe," Groban's No.1 adult contemporary hit from the soundtrack to 2004's "The Polar Express," carries all the hallmarks of the Groban style. Keyboards twinkle during the verses, the muted thwack of processed drums unobtrusively keeps time, a guitar softly strums deep in the mix, twitters of flute, cherubic backing voices and layers of synthesized strings surround Groban's perfectly clear, perfectly enunciated vocals. Everything rises to a downy swell during the chorus, when Groban ratchets the sentimentality up even further by moving into a higher octave.

Then there are the lyrics. The typical Groban song lyric is awash in platitudes and clichés that would make Neil Diamond blanch. For example, "Don't give up/ it's just the weight of the world"; "You raise me up/ so I can stand on mountains"; "In her eyes/ I am." You get the idea. Now compare that to just the opening verse from "Vesti la Giubba" where, after he has learned of his wife's infidelity, the heartbroken Canio the clown realizes he must go on with the evening's performance:

The fury, the angst, the decided lack of drearily pat metaphor or greeting card emotion. Now that's drama! But for the millions who are looking for popular opera form, it seems like too, too much. They want a gentler popera, which offers a whiff of sophistication and fantasy -- but no more. And while it might be overreaching to call that a tragedy, there's something undeniably depressing when the musically and emotionally trite -- and cynically marketed -- work of Groban, Il Divo and their pretty brethren have headed in the opposite direction of its greatest inspiration. The fiery drama and emotional vividness of real opera has been usurped by a gauzy, cheesy romanticism. Sure, audiences throw roses at Il Divo, just as they did Caruso. But they also throw a whole lot of panties.