Naughty "striptease" workouts may be the hottest new fitness craze, but when it comes to female sexual power, I'm not sure I want to take my cues from Carmen Electra. 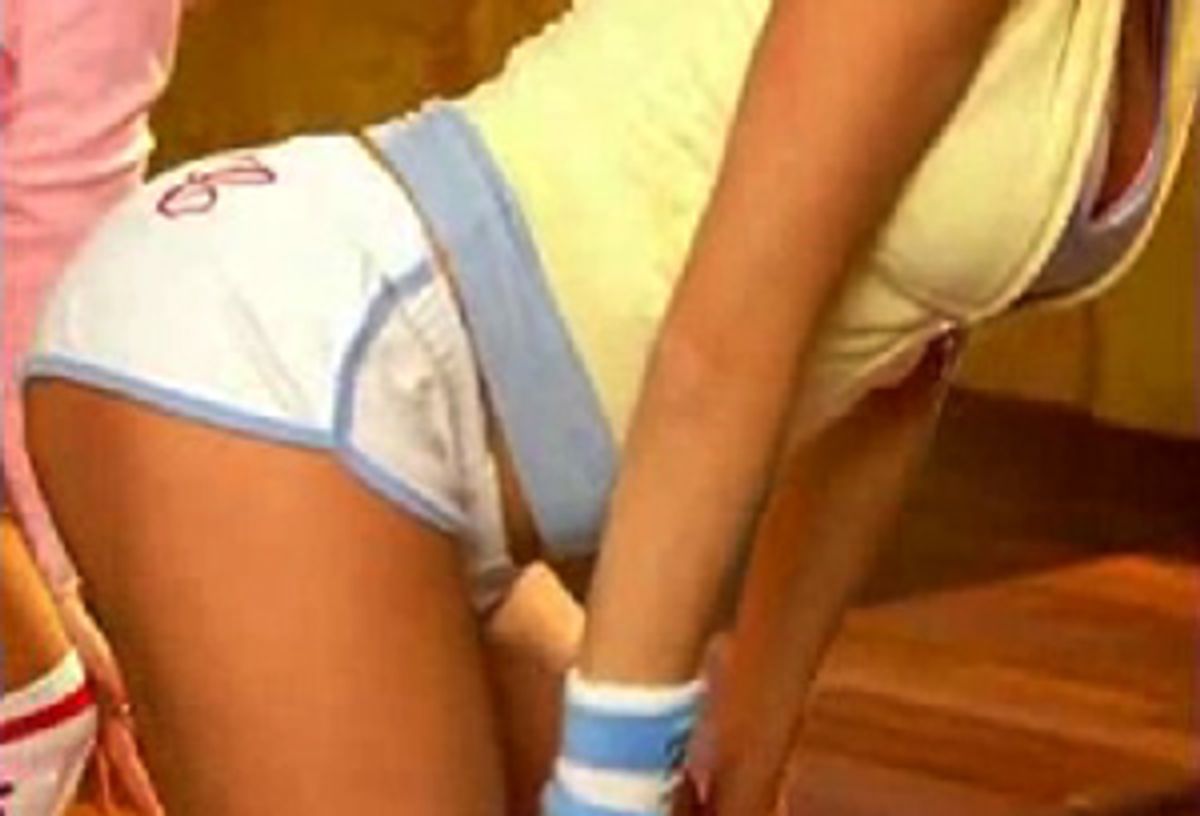 There are women who can work it while they work out. When they feel the burn, they break into a healthy glow that they dab at provocatively with a pink towel. But me? I am more the matted of hair, red of face, sweat stained of oversized, 10-year-old T-shirt type. I am also spectacularly short on time and don't have a nearby gym. So it happens that I've of late become a devotee of DVDs -- and subsequently discovered that Carmen Electra is the biggest thing to happen to exercise since leg warmers.

The former Prince protégé, Playmate and owner of the second most famous pair of boobs ever to grace "Baywatch" has the top-selling fitness title in the country, according to Billboard. Electra's 3-year-old "Aerobic Striptease" has spent 24 weeks near No. 1 on the charts, while her "Lap Dance" has settled a few slots below. Together they are the "Child Called 'It'" of ecdysiastic aerobics.

And because rump quaking abhors a vacuum, the Pussycat Dolls have gone from fanciful novelty to MTV omniscience, Fuse TV's amateur disrobing contest, "Pants-Off Dance-Off," has become the fledgling network's first real hit, and dance poles are going up in homes where treadmills gather dust. We thought stripper chic peaked a decade ago. Instead, it just trickled down.

With gentlemen's club imagery everywhere you look -- from the stripper/rageaholic character Niki on "Heroes" to the Hilton sisters-level ubiquity of Dita Von Teese, not to mention 85 percent of all music videos -- it's no wonder the at-home Champagne Room, free of vice code constraints, appeals. What's intriguing is the way we've dressed up the striptease in the guise of something virtuous. Isn't justifying naughtiness with health a concept about as useful a high-fiber cigarette?

"It's the ever increasing sexyfictation of women," says novelist Lily Burana, who took it off across America in her memoir "Strip City." "What's next? Little gyrations while you're flossing? Sexy tub scrub?" When Burana stripped, she says, "I was so concentrated orange juice sexy, I relished the time when I didn't have to be. But maybe the hootchy angle is the spoonful of sugar that makes the medicine goes down." Point taken. Given our country's epidemic of inertia, anything that gets us off our butts and moving them around is probably a good thing. I've seen real strippers in action, and it is unquestionably intense physical work.

Still, my initial reaction to my Netflix's relentless "Carmen Electra! Recommended for YOU!" campaign was a heavy-hearted disdain. I wondered: Must everything, from Halloween to aerobics, be an occasion for tarting up? But I'm always looking for new ways to break up the monotony of exercise -- and more compellingly, I totally get off on efficiency. The promise of fitness and foreplay appealed to my multitasking side.

Sadly, "Aerobic Striptease" manages to be both and neither at the same time. In fairness to the series' ambitions, it's divided into separate workout-oriented and exotic-dancer-oriented volumes. But to the vocal disappointment of boyfriends everywhere very little attire is actually shed in the DVDs. The routines aren't exactly of the muffin-top-melting variety either. They are, however, friendly, encouraging and middle-of-the-road moneymaker shaking enough to have earned legions of would-be Scores girls devotees.

The first time I ripped open Electra's "The Lap Dance," my husband bounded into the room, as if responding to some far-off call at a pitch only men can hear. We watched as Electra, clad in a workout outfit that included high-heeled boots, dispensed wisdom on how opening your legs is both a great stretch and -- you heard it here first -- "pretty sexy." Then she purred invitingly, "This routine will definitely get your man off the couch and away from the TV." And into a chair, I thought.

Though Electra refers to the routine as a lap dance, she does it to an empty seat. A DVD menu, meanwhile, offers modifying advice on doing the moves with someone actually in the chair. "I need to practice this on you," I told my husband. He didn't look scared until he realized I literally meant on him. When he took his place, his white knuckles clutching the wooden seat, I promptly kicked him in the head. Twice. Eventually, I mastered the routine with an empty chair and to the remedial pace of John Lee Hooker's "I'm in the Mood," but I don't see a future where T-Pain is writing odes to me.

Not that the sexy exercise industry needs my support. Mainstream gyms like Crunch now offer stripper workouts, and Sheila Kelley's "S Factor" -- a chain of studios, books and a series of successful DVDs to "empower women and unleash their sexual creature" -- has been featured on "Oprah" and racked up endorsements from Allison Janney and Teri Hatcher. An actress and mother of two with a lanky, girl-next-door persona, Kelley discovered stripping while preparing for the film "Dancing at the Blue Iguana" a few years ago. She pretty much hasn't gotten off the pole since.

Maybe some of the women shimmying around at home to their stripper workouts are loosening up more than their buttons -- and good for them. It's not as if most of us take off our clothes, mentally high-five and think, "Nothing to complain about here!" So when Electra invites the viewer to touch herself, or Kelley says to not be afraid to take up some space, I think: You don't get that in Pilates. Liking yourself and your body, being comfortable with it, is even harder than doing a flying split around a pole.

Still, it does seem more than a little bogus that while both Electra and Kelley emphasize the stripping with a capital S in their come-ons to customers, in practice their monty stops well short of full. As well intentioned and unthreatening as that tactic may be, the "empowerment" angle feels like wanting to have your thong and toss it too.

I don't need to be loved for my mind 24/7 -- and I am all for embracing my feminine sexual power. The thing that gnaws about the "fit to strip" craze, though, is that really stripping is not just a dance. It's a transaction. Life may be filled with activities that can be performed on a professional or recreational level. But whether or not, in the privacy of one's home, a folded bill is actually tucked anywhere, the burden and the erotic charge of commerce linger in stripping. Or, as Gina Gershon so sagely put it in "Showgirls," "You like her? I'll buy her for you."

I'm only slightly cranky that so much of our day-to-day life is eroticized. I'm more tired of it all being so commercialized. And worse, homogenized. As I gamely endeavor to unleash the goddess-via-Mötley Crüe video within, I can't get the image of the multitude of women who've Amazoned or Netflixed themselves into the same spot, humping the dining room set to "Smack That" with the same choreography, out of my head. I can see them all over YouTube, proudly undulating in lockstep. As we're all suggestively flipping our hair in sync, do we become not people but products -- mass-produced treats that exist to be consumed, not necessarily tasted? There may be times I want to be a sex object. I'm just not ready to be a Happy Meal.