Mel Gibson's latest pretends to care about the fall of man, but it really only wants to impale, flay, disfigure and torture him. Sound familiar? 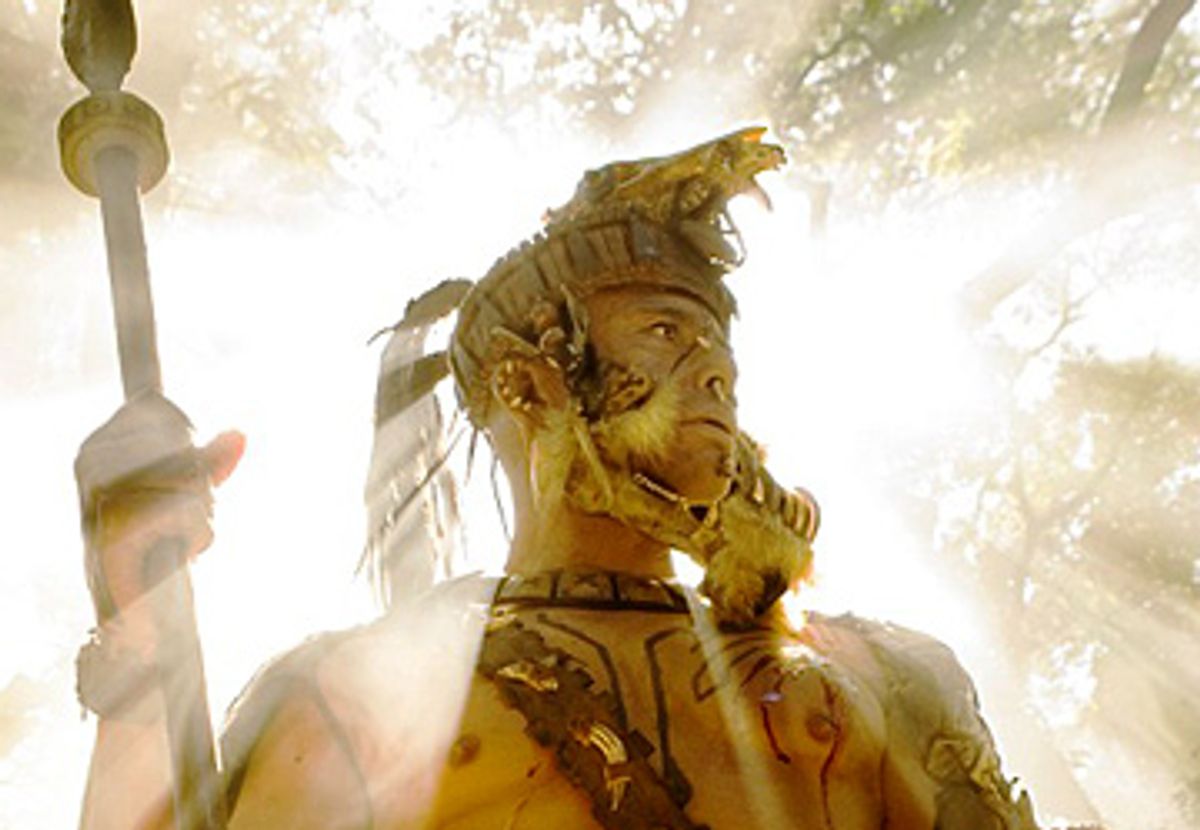 To be truly effective, "Apocalypto" needs an exclamation mark. You just can't give a movie a title that silly without one, and also without some portentous '60s-style typeface that looks like it was carved out of limestone, or came pouring out of a volcano. If only this were a cheeseball entertainment out of 1963, where the opening-night audience might be showered with Styrofoam temple blocks and soap-bubble lava, while actors in fearsome Maya regalia bearing plastic severed heads on spears roamed the aisles.

Sadly, Mel Gibson's latest directorial offering is not "APOCALYPTO!" but just "Apocalypto," and despite the silly title it's a relentlessly gruesome, visually impressive and ultimately not very interesting movie with some pretensions to seriousness. Depending on how you look at it, these pretensions are either too much or not enough. As I see it, "Apocalypto" is too bloody-minded to work as pure escapist adventure, but far too limited in intellectual or imaginative scope to be challenging. Unless, that is, your idea of being challenged is to see the many different ways the human body can be impaled and disfigured: with stakes, spears, arrows, knives, pikes, teeth, darts and elaborate spiky wooden contraptions whose names I don't know.

Let's face it: Hardly anyone will go see "Apocalypto" out of genuine interest in the pre-Columbian Maya civilization that is so problematically captured here. People are curious about this movie because of what might be called extra-textual reasons, because its director is an erratic and charismatic Hollywood figure who would have totally marginalized himself by now if he didn't possess a crude gift for crafting violent pop entertainment. No one but Gibson, arguably, would have tried to make an expensive studio-scale film on remote Mexican locations, shot in the Yucatec language with a cast of unknowns. (He seems to be making an esoteric tour of world languages. Will his next movie be in Hawaiian? Romansh? Tocharian B?)

This kind of obsessive, Erich von Stroheim-style folly, this passion for bigness and spectacle and the outsize egotism it embodies, holds tremendous appeal within the culture of Hollywood. So the public narrative surrounding "Apocalypto" is almost all about Gibson, and hardly at all about the movie. Can the demented Captain Ahab accomplishment of this film outweigh, in the hearts and minds of movie-biz insiders, Gibson's drunken anti-Semitic tirade or his general reputation as a religious fanatic and all-around nutjob?

Well, having seen "Apocalypto" I have two things to tell you: Mel Gibson has serious issues with violence and masculinity, and if there's really "Oscar buzz" around this picture, then everyone in Hollywood really is an idiot. There are about 10 truly amazing minutes in "Apocalypto," when the film's hero, a captured villager named Jaguar Paw (played by the Native American actor Rudy Youngblood), is brought into a Maya city as a prisoner and taken to the central pyramid, where captives are being sacrificed by the score to appease Kukulcán, supreme god of the Maya pantheon (equivalent to the Toltec-Aztec god Quetzalcoatl). And that's about it.

I have no doubt that the costumes and the monumental architecture of these scenes were exhaustively researched, and the mood of ruinous, smoky, blood-curdling terror is fully convincing. Yucatecan Maya culture was indeed in decline by the 16th century (which is clearly the period of "Apocalypto"), and while the scenes of environmental degradation and crop failure have undertones of contemporary commentary, they're not outside the bounds of plausibility. But this fragmentary and terrifying glimpse is literally all we see of Maya civilization in "Apocalypto." The rest of the film -- like almost all of Gibson's films, either as director or star -- is the story of a lonely masculine hero who sacrifices and suffers, and who is redeemed through bloodshed.

From "Mad Max" to "The Bounty" to "Braveheart," Gibson has played a series of manly men who could take a beating or dish one out, men who embraced killing or dying for those they loved. To most of us watching, his bad-boy good looks, his insouciant eye-twinkle and suggestion of a smirk, seemed to mark him as a new action-hero archetype, heir to the tradition of John Wayne and Clint Eastwood. Gibson, who may be weird but has an autodidact's self-forged intelligence, had something bigger in mind. He played Hamlet in 1990 and made a film about Jesus in 2004. If neither of those guys is exactly a kick-ass action hero, they are surely both self-dramatizing icons of masculine suffering.

In "Apocalypto" that figure is Jaguar Paw, a handsome, athletic fellow separated from his young, pregnant wife (Dalia Hernandez) and small child when their village is overrun by marauding Maya warriors. (The scariest of these guys, played by Raoul Trujillo, wears the jawbones of vanquished foes on his massive forearms.) Gibson may intend the scenes of rape and pillage to evoke guilty or painful associations -- memories of the Nazis, the Serbs, the Hutu, take your pick -- but the modes of violent death in "Apocalypto" are so many and varied they quickly become pornographic rather than instructive.

Most of the film is just a lurid jungle-chase adventure, better crafted and more attentive to detail than the Tarzan films of the '50s, but not much different in tone or effect. Jaguar Paw must escape from the sacrificial altar through highly improbable means, flee through the jungle just ahead of Trujillo's character and his other pursuers (felled, one by one, with the help of poisonous toads, venomous vipers and roaming black jaguars) and save his family before the rising waters flood their hiding place. And, wait a minute -- who are those guys in the floating wooden contraptions off the coast, wearing tin hats and carrying guns and crucifixes?

"Apocalypto" may not promulgate any flat-out historical falsehoods, but it isn't exactly purveying truth either. Jaguar Paw is never anything more than a good-looking, apparently decent guy in a tough spot, and the portrayal of Maya culture is just as superficial. Like most other Mesoamerican civilizations, the Maya had a troubling preoccupation with death in general and human sacrifice in particular. But they also created a culture of advanced astronomical and mathematical knowledge; they were the only pre-Columbian society to develop a true written language and leave behind an extensive library of mythology, science and literature (almost all of it destroyed by the Spanish).

Needless to say, we don't learn any of that, and while the film's title may suggest that it will depict the famous "collapse" of Maya civilization -- whose causes are still debated by scholars -- it doesn't. That happened sometime around 900 A.D., and the Yucatecan culture found by the Spanish 600 years later (and depicted here) could almost be called the watered-down and decadent descendant of the earlier Maya traditions, which had become mixed with the dominant Toltec-Aztec culture of central Mexico.

Is it Mel Gibson's responsibility to give us a history lesson on the complexities of pre-Columbian civilization? Absolutely not. His American Revolution star vehicle, "The Patriot," took far greater liberties with the facts -- importing World War II atrocities and blaming them on 18th-century British forces -- and I found that film more exciting and effective than this one.

But those of us who watch movies do have a responsibility -- a responsibility not to imbue a lurid entertainment like "Apocalypto" with more seriousness than it deserves. (I have never seen a film with this much gore and subtitles, not even in grade-Z Italian horror.) Ours is a culture of gawkers, and none of us can completely resist the spectacle of a disturbed guy -- who used to just be a movie star -- projecting his own violent fantasies in public and repeatedly enacting his own crucifixion. Let's not pretend there's anything healthy about it.