With his rock star visit to New Hampshire, the highflying senator continues to tantalize Democrats with intimations of a White House run -- and a buzz not felt in American politics since JFK. 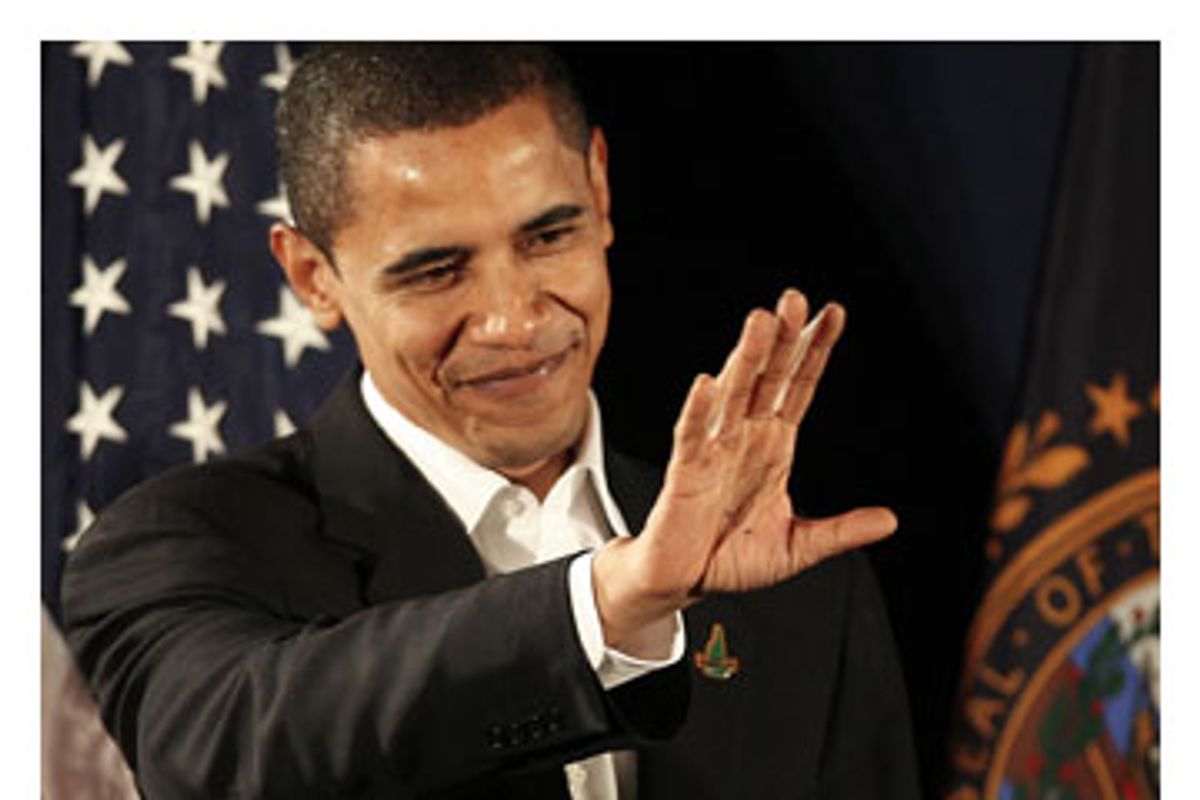 As Barack Obama addressed the largest pre-presidential-primary crowd in modern New Hampshire history Sunday afternoon, Democratic state party chair Kathy Sullivan was sitting directly behind the Illinois senator. From her vantage point, Sullivan saw exactly what Obama saw -- 1,500 rapt faces staring up at him with curiosity, affection and hope. Turning to her seatmate Sylvia Larsen, the president of the state Senate, Sullivan whispered, "Imagine what it must be like to be him."

For Obama, the "Imagine" has almost reached John Lennon levels. His political ascent has already reached those star-studded heights where even political insiders like Sullivan cannot fully comprehend the pressures from the adoration and expectations that envelop him. He was not supposed to run for president this time, for Obama was the Democratic future held in reserve for 2012 or 2016. We are witnessing something rare -- a would-be candidate tantalizingly signaling his potential availability and the rank-and-file of the Democratic Party responding beyond his most rapturous dreams. As Chicago-based media consultant David Axelrod, one of Obama's closest advisors, said in an interview Monday, "I wasn't alive then, but this is the closest thing to a draft since Adlai Stevenson in 1952." (Stevenson, the reluctant governor of Illinois, was nominated on the third ballot at the Democratic Convention.)

Obama's best-selling book may be called "The Audacity of Hope," but a presidential campaign by the fledgling senator (he was elected in 2004) might best be dubbed "The Hope of Audacity." Virtually every major politician believes in destiny, but few test fate's limits so early in his or her career. Facing more than an invasion-size armada of 100 reporters at a press conference Sunday afternoon, Obama said, "I am suspicious of hype. The fact that my 15 minutes of fame have extended a little longer than 15 minutes, I think, is surprising to me and completely baffling to my wife."

Axelrod insists that Obama has not definitely made a decision to become part of the 2008 field, partly because of that wariness about the hype and the hoopla. "Anyone who tells you that he is 100 percent certain that Senator Obama's running doesn't know him," Axelrod said. "He's still working it through." Part of working it through, though, was promising a major announcement before "Monday Night Football," which turned out to be a jokey declaration that the Illinois senator was "ready for the [Chicago] Bears to go all the way."

Since two presumed 2008 contenders, Mark Warner and Russ Feingold, have disavowed their candidacies in recent months, there is a danger in assuming that anybody seriously contemplating a presidential bid is destined to run. But few in Democratic politics still believe that Obama is just aimlessly window-shopping outside the White House. A major Democratic strategist, who is affiliated with another presidential candidate, ran into Obama on Capitol Hill last week and was told by him, "I hope that when your conflict-of-interest period is over, we can work together." The easy translation: "After your candidate loses in the early primaries, I hope that you will sign on with me."

There is an unplanned quality to the Obama movement that should not be dismissed. Obama's current ascent began three months ago when he was the headliner at Sen. Tom Harkin's steak fry, the biggest political event on the Democratic calendar in Iowa, the first caucus state. Harkin presumably picked Obama -- a non-presidential candidate -- to avoid offending Iowa Gov. Tom Vilsack, who is running for the Democratic nomination and would be suspicious of any potential rival.

As Sullivan tells it, her invitation to Obama to come to New Hampshire for a post-election fundraiser was an impulsive gesture. The Thursday after the election -- buoyed by the Democrats' landslide sweep in the state -- she received a call on her cellphone from an unfamiliar area code. "Kathy, this is Barack Obama," the voice on the other end said, before adding, "I might be coming to New Hampshire." It was yet another signal of Obama's fast-growing fascination with running in 2008. Already envisioning a modest-size victory celebration in New Hampshire, she told him, "We were talking about having a little event, and you might want to come up and help with the fundraising."

No one anticipated that 1,500 tickets (at $25 a piece) would be all sold by the middle of last week -- and fire codes and the lack of a larger venue forced the state party to stop there. (Earlier Sunday morning, Obama attracted another 750 people to a book signing in Portsmouth.) New Hampshire, as the fabled home of the first presidential primary, has a vibrant political culture, but an outpouring like this is unprecedented in my experience covering the last seven primaries here. All day Sunday, long-memoried political reporters struggled to find a parallel. When, for example, Bill Clinton ran for president here in the 1992 primary, he never attracted a crowd beyond, say, 700 people. When John McCain was riding high before he won the 2000 Republican primary, he might have spoken to a thousand voters in a high-school gym. And those were free events on the eve of a primary. Last time around, John Kerry was speaking to crowds of roughly 100 people in fire stations around the state, little more than a month before the primary. Small wonder that local politicians like state Sen. Lou D'Alessandro, a major John Edwards backer in 2004, were harking back to John Kennedy's 1960 appearance at the University of New Hampshire to find an event that matched Sunday's Obama appearance.

There is a palpable uneasiness in New Hampshire and elsewhere with the notion of Hillary Clinton being prematurely anointed as the 2008 Democratic nominee. It is not accidental that Obama is the third candidate this year who has been ballyhooed as the challenger with enough heft to take on the Clinton dynasty. First came Warner, followed by Al Gore -- still a possible candidate, whose luster dims the longer he remains indecisive on the sidelines. Helping propel the Obama bandwagon is that the senator, like Gore, passionately opposed going to war in Iraq in 2002. Part of the rationale for the anti-Hillary star search is the feeling that the New York senator cannot win, barring a full-scale collapse of the Republican Party. "If the country has changed, maybe she could get in," said Nancy Lloyd, who runs a bed-and-breakfast in Jaffrey, as she waited to hear Obama. "But if they are going to fight all the old battles and smear her, Hillary should stay out."

Without ever mentioning Clinton by name, Obama repeatedly spoke in New Hampshire about this weariness with old battles. At his press conference, he lamented "the small, petty slash-and-burn politics that we have been seeing over the last several years." In his formal speech, which he delivered wearing a dark jacket and crisp, open-necked white shirt, Obama declared, "Politics is not a sport and the debates we have in Washington are not about who is up or down, they are not about personal attacks, they are not about tactical advantages ... They are about who we are as a people."

This was about the level of issue-oriented specificity in Obama's speech and his other public remarks. What Obama is offering is a different kind of hope than the standard Democratic variety. He embodies the idea of a style of governing that goes beyond the nonstop rat-a-tat invective that dates back to the Clinton era battles against Newt Gingrich. Obama, the mixed-race son of Kenya and Kansas, who grew up in the multicultural melting pot of Hawaii, also represents a politics that transcends the two-century-old battles over race and ethnicity. Asked about his middle name "Hussein" at Sunday's press conference, Obama, provoking laughter from the reporters, flatly declared, "The American people are not concerned with middle names."

Obama's vagueness provoked a certain degree of grumbling among the Democrats lucky enough to snag tickets. "I came with questions and I left with questions," said Anne Stowe, a high-school mathematics teacher from Nashua. "I'm not certain that I know who he is and what he stands for."

The morning after Comet Obama flashed across the New Hampshire skies, Democrats were still trying to sort out exactly what had happened. As Sullivan said, referring to the massive turnout for Obama, "People have been constantly asking me, 'Why, why, why?'" By way of explanation, she mentioned Obama's status as the first prominent post-Vietnam era politician and the way he reflects the changing ethnic and racial makeup of the country. The New Hampshire party leader also acknowledged that she understood the complaints that Obama was light on the issues. "But he has the vision and he has the magic," she added. "And maybe that comes first."

Something near-magical did happen in New Hampshire on Sunday, when more than 2,000 Democratic voters turned out at two events to see a would-be presidential candidate, who had been in the Illinois state Senate just two years ago. Magic can easily dissipate in politics, especially during a long and grueling campaign year like 2007. But something is happening around Obama that we have not seen in American politics for decades. And no matter what happens from here, the significance of Obama-mania, in terms of the Democratic Party, Hillary Clinton, the politics of race and the coming of a new generation, may long endure.