Rock and Roll Hall of Famer David Crosby talks about touring, political engagement and why he doesn't listen to Britney Spears. 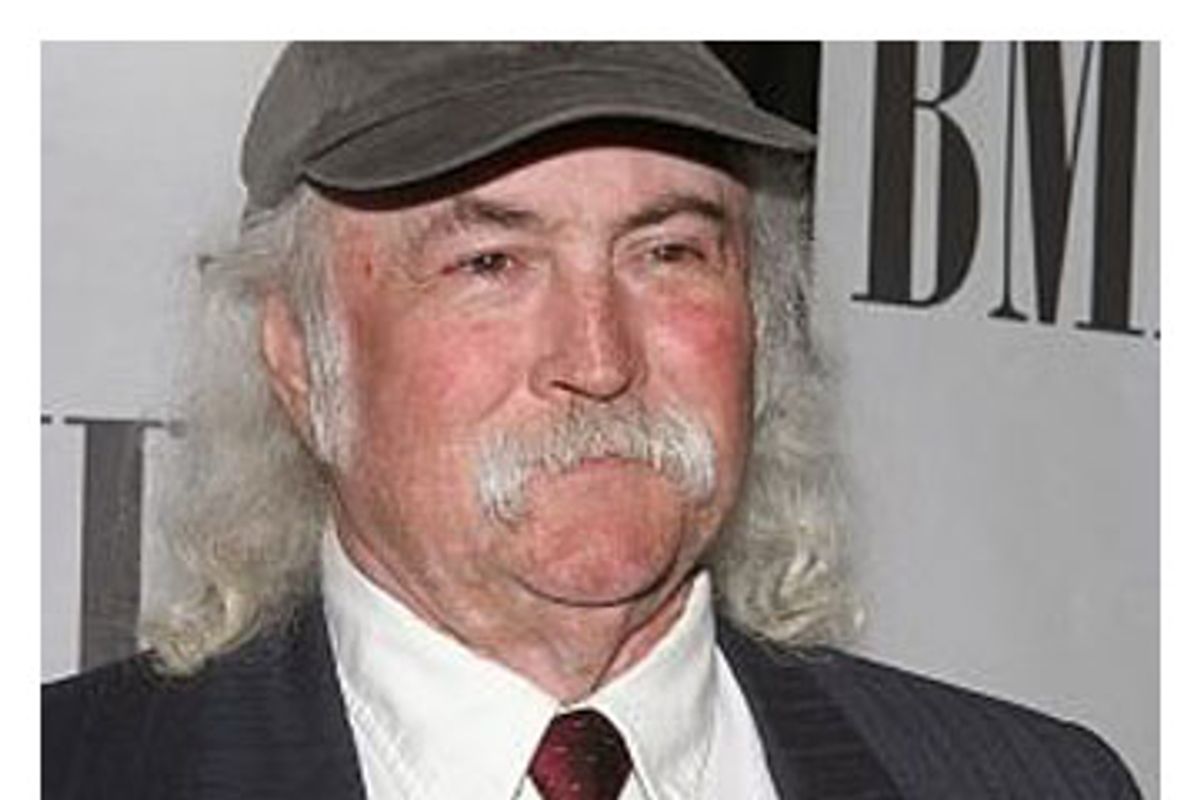 David Crosby may be best known for the dulcet harmonies he lent to legendary bands like the Byrds and Crosby, Stills and Nash (and, depending on his mood, Neil Young), but he's comfortable going solo, too. In his new memoir, "Since Then: How I Survived Everything and Lived to Tell About It," Crosby, 65, picks up where he left off in his 1988 book, "Long Time Gone," recounting the health scare that led to his liver transplant, his decision to serve as a sperm donor for singer Melissa Etheridge and her then-partner Julie Cypher, his run-ins with the law and a certain hostility he has toward today's pop stars: "Their world is about celebrity," he writes. "They've been so sold on the bullshit idea of stardom and celebrity that they're slaves to the concept."

Salon spoke with Crosby on the phone as he prepared for his next tour, kicking off Down Under in February.

This year's tour with CSNY was the largest you've ever been a part of. Why do you think you were drawing such large crowds?

I think we're making the best music we've ever made and playing the best we've ever played. And more importantly, even though we were being really political, the people were really getting it. We could see some people getting up in the back rows and leaving -- [imitating a Southern accent] "What are they sayin'? You can't talk that way about our president." But overall it was great.

I know you strongly disagree with many of the current administration's policies and are in favor of speaking out against them. But isn't there something kind of strange about calling it the "Freedom of Speech Tour" and then charging $200 for people to come see it?

I don't see a contradiction. It's about the freedom to speak, but that doesn't mean our concert should be free. There's a difference. And to do what we do, to give the show that we give, requires a large amount of money. And we don't set ticket prices either. After we pay for everything and pay the promoters, we're not making a huge amount of money off this. We certainly aren't making Eagles money or -- who's the one with the big nose? -- Barbra Streisand money.

Your book makes it clear that you feel there's a lack of political engagement among today's pop stars compared to your contemporaries. Why do you feel that way?

Look, can you point to anyone that's doing anything to be proud of? Has Britney Spears ever given a benefit concert? Has Justin Timberlake ever been a part of a benefit?

Yes, he has. I even saw him at one. He performed in Toronto at a concert in the aftermath of the SARS outbreak.

Well, I imagine that was more to be fashionable than anything. I'm more interested in people like Jackson Browne and Bonnie Raitt who have a long-term commitment to issues that they care about. You can get a bunch of people in a room to sing "We Are the World," but it's what happens the next day that's important.

But who cares if it's fashionable as long as they do it?

I care. I'm not interested in someone doing a benefit because it's the flavor of the month. I'm interested in people who know what they're talking about and feel it in their heart. I just see that less than I did when I was coming up.

I'm glad he did. He's a great exception.

To what do you attribute the lack of political engagement that you're seeing on the part of today's pop stars?

I think MTV has a lot to do with it. I'm convinced that the Byrds would not be able to get a record deal today. We just wouldn't fit in. We came up at a time when you had to write songs that had meaning. Now it's more about how cute your tits are -- they can fix anything up in the studio anyway. You don't have to be able to sing or play. That's not what I'm interested in. I listen to Bob Dylan, not Britney Spears.

Prefab pop stars are not a new phenomenon.

Of course not. That started before me even. Put four guys in suits and give 'em a song to sing.

And it's something that you've had a taste of. With the exception of Roger McGuinn, you and the rest of the Byrds were replaced by studio musicians on "Mr. Tambourine Man."

It seems that there's a contradictory thread running through the book. You're an antiwar political activist, yet you were arrested for keeping a firearm in a hotel room. You are trying to broaden the concept of what a family is, yet your behavior has at times been detrimental to your family. Do you think those contradictions take away from your credibility?

Listen, I'm not trying to tell anyone anything. I grew up on a piece of land that cultivated lemons and avocados and when you were 12 you were given a gun. I took shooting lessons in school. I come from a gun-friendly culture. That's a lot different than being a gangbanger with a TEC-9. I was stupid and I made a mistake but that doesn't mean all of a sudden I'm wrong when I say that war is a bad thing.

And as far as the family thing, when I was young I was selfish and self-centered and didn't know how to deal with the responsibility of raising a family. But I've learned how and I love all my children more than anything and am friends with all of them. I made mistakes, but I learned from them.

Is there a lesson you want people to take away from your life?

I couldn't say anything that didn't sound like a platitude. I don't know if I have anything to teach anyone. I had a liver transplant 11 years ago and I'm still around to watch my son grow up. That's good enough for me.