The Virginia native and son of Indian immigrants changed history with a camcorder and introduced Sen. George Allen -- and the rest of us -- to the real America. 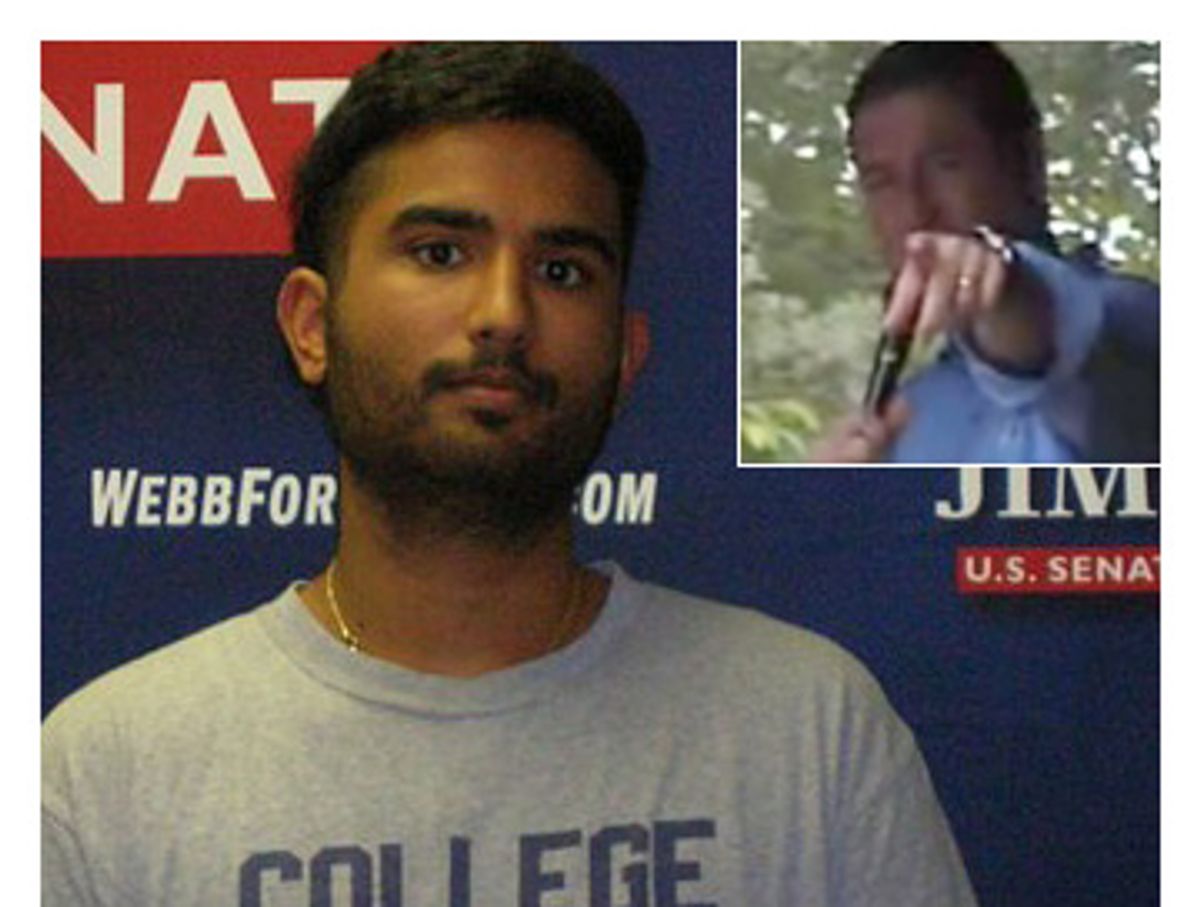 Sometimes, for just a moment, nothing makes sense. The senator who would be president stands on the dais. It is a bright summer day. The branches of trees, still green, sway gently in the breeze. Republican George Allen is feeling good, and the crowd likes him. Almost everyone thinks he will win reelection. Then he says something. "Let's give a welcome to macaca here. Welcome to America and the real world of Virginia." No one knows what has happened.

But the confusion does not last long. Over the next week, people consult dictionaries in several languages. They find that the word "macaca" is a term for monkey, used in some places around the world as a racial epithet. At first, the senator recoils from the claims of insensitivity, refusing to apologize. Then he apologizes hesitantly, then profusely. At first, the senator's advisors say the word was a nickname for a mohawk haircut. Then they say the word meant nothing at all.

As days stretch into weeks, a video of that moment, with the senator onstage, spreads over the Internet like a sickness, entering popular culture and political history. Months later in the fall, when the votes are counted, it becomes clear that a successful politician has stumbled badly over a 20-year-old with a camcorder. The career of George Allen, the former front-runner for the 2008 Republican presidential nomination, is in shambles. And when he finally concedes defeat two days after the 2006 election, he has not only lost a seat that was considered safe but also handed Democrats control of the Senate, completing their takeover of both houses of Congress.

It must be said that the young man, Shekar Ramanuja Sidarth, is not much of a cameraman. In the macaca footage, his hand shakes, though he manages to hold Allen in the frame as the senator points him out, an Indian-American in a crowd of whites. But in the weeks that follow, Sidarth does not shy from the spotlight that surrounds him. He undergoes a transformation of sorts, appearing on CNN and the network news, giving long interviews to the pen-and-paper press. He becomes a symbol of politics in the 21st century, a brave new world in which any video clip can be broadcast instantly everywhere and any 20-year-old with a camera can change the world. He builds a legacy out of happenstance.

Weeks after Allen's blunder, Sidarth finds himself writing an entrance essay for a class at the University of Virginia, where he is a senior. The class is called Campaigns and Elections, and it has about four applicants for every spot. "I get all these large, elaborate essays about the meaning of politics and why they are going to be president," says Larry Sabato, the professor. Sidarth writes only three words. "I am macaca." Sabato lets him in. "When you have the right stuff, you don't need to brag," the teacher explains. "A simple declarative sentence will do."

Of course the myth of macaca, like the myth of Achilles, does not capture the enormous complexity of the political war. Voters were also thinking about Iraq, about corruption in Congress, and about the unpopular president with whom Allen was allied. What's more, Sidarth wasn't really just a random 20-year-old with a camcorder testing the power of the Internet. He was backed by the full force of a Senate campaign, with a professional public relations machine that had the ear of national newspapers and networks.

"People sort of assume that we just threw macaca on YouTube and it just blew up and 400,000 people saw it and all this stuff happened with George Allen and then the whole tide was shifted in our race," says Jessica Vanden Berg, the campaign manager for Jim Webb, Allen's opponent. In fact, the Webb campaign bided its time, and then used the mainstream media to launch its message.

Hours after Allen uttered the word, Sidarth, who was a Webb volunteer, called the campaign to explain what had happened. It was getting late on a Friday afternoon. At Webb's Arlington headquarters, campaign staffers were not initially sure what to do, so they did the only sensible thing. "We all went out to the bar," Vanden Berg recalls. By Monday, the video had still not been released online, but political bloggers were abuzz with word that a bombshell was coming. When the campaign tipped off a Washington Post reporter, no one knew whether macaca would be a big story. "The Post reporter was sort of like, 'I don't know if this is news. I don't know if we are going to write about it,'" says Vanden Berg.

The campaign did not put the video on YouTube, the file-sharing service, until the Post had taken the bait, publishing a short story online. It was a relatively slow news week, in the dead heat of August vacation season, and the political press, backed by hundreds of bloggers, went wild. The macaca frenzy was born. More stories followed, about Allen's apparently uneasy relationship with his Jewish heritage, then about Allen's alleged pattern of racist behavior. Though Allen's denials were consistent, he never regained his balance or his standing in the polls.

A nation of political partisans took notice. Everywhere there were imitators. In Colorado, activists for the liberal group Progress Now taunted Republican Rep. Marilyn Musgrave as she walked down the street, hoping she would embarrass herself. In Montana, in another cliffhanger race won by a Democrat, opponents of incumbent Republican Sen. Conrad Burns hounded him with a camcorder as he traveled across the state making gaffe after gaffe. And in Virginia, an abrasive blogger named Mike Stark shouted questions at Allen until he was tackled by Allen's staff.

Now with the onset of the 2008 campaign, the macaca myth is set to grow ever larger. Allen's loss, after all, set the nation on a new course. It changed control of the Senate and suggested that Virginia, with 13 electoral votes, may have changed from red to purple. But the real lessons remain to be sorted out. Clearly, closely contested political campaigns will now take place in a sort of YouTube panopticon. Michael Moore-aping saboteurs will proliferate. But the upside is also considerable. Voters will have more opportunity than ever before to stand in Sidarth's shoes and see their leaders in action, at their most candid, and perhaps their most honest.

Days after the election, Sidarth wrote an essay for the Washington Post analyzing his role as a key bystander in the 2006 election. He zeroed in on one important fact. The backlash against Allen had apparently reached into the southern Virginia county where the senator had uttered the word. Dickenson County was assumed by much of the national press to be a place that still embraced the old Confederate Virginia, a state where until 1997 the official song was a minstrel ballad called "Carry Me Back to Old Virginia." In that ditty, the narrator, a self-identified "darkey" labors "so hard for old massa."

"Nothing made me happier on election night than finding out the results from Dickenson County," Sidarth wrote. "Webb won there, in what I can only hope was a vote to deal the race card out of American politics once and for all."

Those are the hopes of an idealistic college student. While most of white downstate Virginia is solidly Republican, Dickenson County, with its history of unionized mining, tilts Democratic. Even John Kerry won Dickenson while losing the state.

But Sidarth is right that the macaca incident played a pivotal role in the election. It just may not be the role he imagined. Sidarth wants to believe it means the race card is losing its potency in the rural South. Pundits wonder about the long-term implications of homemade, unfiltered, viral webcasts on political campaigns. But the real message of macaca may have been the kid behind the camera.

Jim Webb eked out a statewide victory on the basis of massive margins in the booming suburbs of northern Virginia. Macaca and all the missteps that followed helped convince voters in these affluent, well-educated and increasingly diverse zip codes outside Washington that they had grown tired of George Allen. But the same voters may also have recognized Sidarth, born and raised in northern Virginia, a straight-A student at a state college and a member of the local Hindu temple, as their neighbor. Allen was just a California transplant with dip and cowboy boots who had glommed on to the ancient racial quirks of his adopted home. Sidarth was the kid next door. He, not Allen, was the real Virginian. He was proof that every hour his native commonwealth drifts further from the orbit of the GOP's solid South and toward a day when Allen's act will be a tacky antique. Allen was the past, Sidarth is the wired, diverse future -- of Virginia, the political process and the country.