Of course this movie is silly and implausible and completely over the top, but you just can't help rooting for Sylvester Stallone. 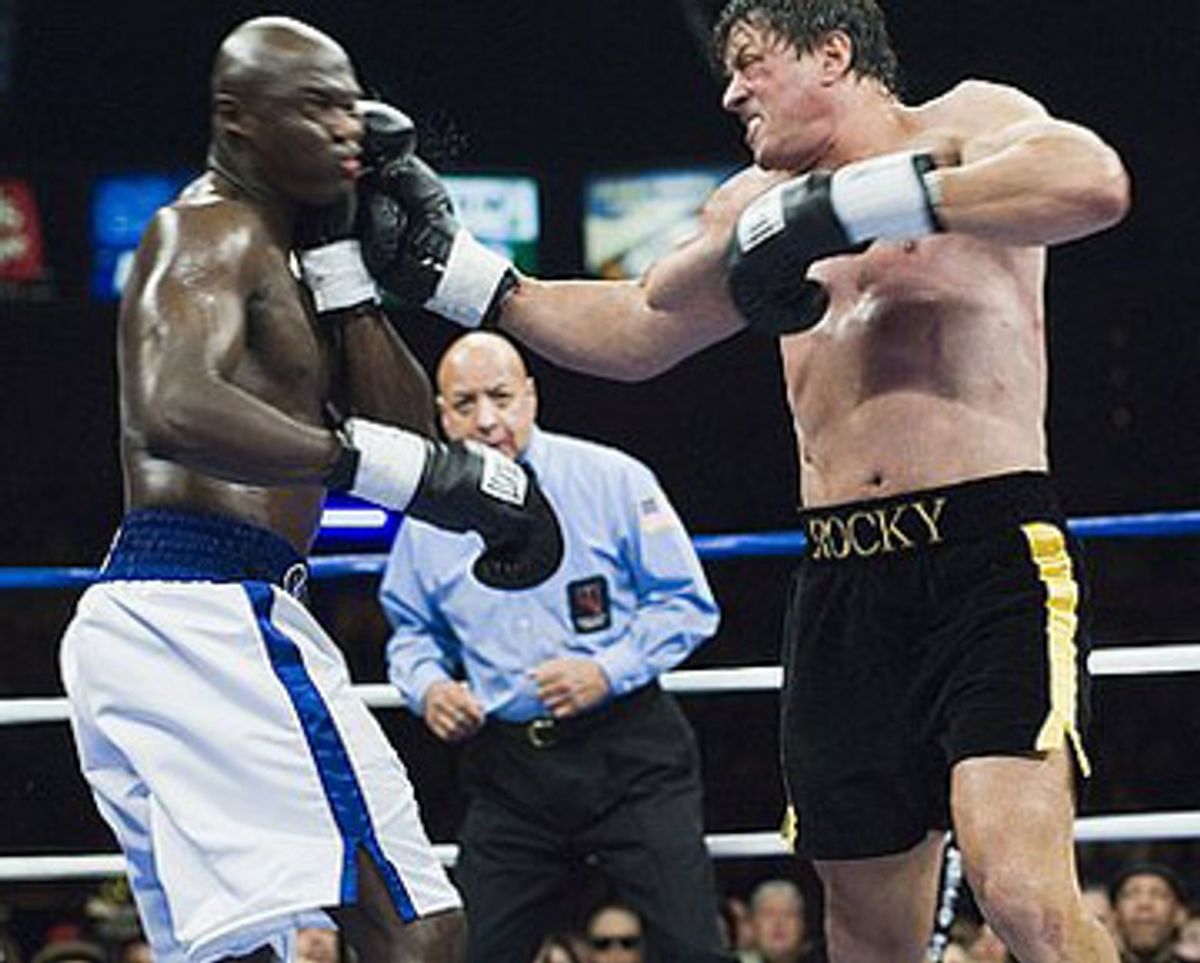 It would be cheap and easy to dismiss "Rocky XVIVIX," or whatever this movie is called, as one last, flatulent gasp of a fading star's self-invented mythology. Which isn't going to stop me from doing it. But here's the thing. Even as Sylvester Stallone's long goodbye to the heroic underdog who made him famous descends from pathos into silliness, and from fairy tale into hallucination, you can't help liking the big galoot.

"Rocky Balboa" is so maudlin, so infused with nostalgia and sentimentality, that it becomes meta-sentimental, providing a running commentary on its own obsessions in much the same way that Rocky's South Philly accent, porkpie hat and battered visage have become signifiers of retro-ethnic Americana, robbed of either sincerity or authenticity. There are at least three scenes shot at the grave of Rocky's beloved wife, Adrian (it bothers me, frankly, that her tombstone does not say "Adrianna," the character's actual given name), and we see translucent apparitions of Talia Shire in her dorky glasses, along with other superimposed snippets from the original 1976 film.

For the first half of the film, the convincingly battered ex-pugilist wanders the streets of the City of Brotherly Love in a sort of retrospective haze, visiting the demolished or dilapidated landmarks of his youth: the ice rink, the corner bar, the meat warehouse where he once famously pummeled sides of beef. At night he puts on an oversize red dinner jacket and presides over the intimate Italian eatery he has owned for the past decade, recounting his old war stories for the bazillionth time and posing for pictures. A pianist noodles along on the soundtrack the whole while, acting as if he's about to play the "Moonlight Sonata" but never quite getting to it.

If this were what the movie was actually about -- Rocky living in retirement, running on fumes and memories, estranged from his son (Milo Ventimiglia), attracted to a single mom from the nay-buh-hood (Geraldine Hughes) but still haunted by Adrian -- it'd be such a courageous sendoff to the series I wouldn't care how mawkish it became. That story would not draw millions of viewers, presumably, but there's enough of it present to ground the Rocky fairy tale, one more time, in that ingenuous, cornpone realism that has always been Stallone's strong suit.

As people in Hollywood learned years ago, behind Stallone's various meathead personas lies a canny intelligence. "Rocky Balboa" is specifically constructed to be a family film for the holidays: There's no sex and no cursing, and the violence is cartoonish and ritualized, in time-honored movie fashion. In technical terms, the balance between bittersweet nostalgia and inspirational myth is adroitly handled. Don't be surprised if this is a big hit.

Stallone-as-Rocky is like Proust, fighting to recapture the past, with the sole difference that instead of remembering those long evenings of Wagner and philosophy at Mme. Verdurin's house, Rocky remembers long evenings of having his face pounded into Christmas pudding by Apollo Creed, Clubber Lang and Ivan Drago. Like the protagonist of "In Search of Lost Time," Rocky wants his past to come alive again, which means that the film has to find a pathway, embarrassing and implausible as it may be, for this geezer to fight the heavyweight champion one more time.

That plot is not interesting in any way. The champ in question is a sleek, hip-hop-flavored young fighter named Mason "The Line" Dixon (Antonio Tarver), who has become an object of fan derision for stomping a series of stiffs and patsies. After an ESPN computer simulation determines that Rocky in his prime would have beaten Dixon, the latter's promoters concoct a scheme for an "exhibition" match in Las Vegas between the 50-something restaurateur ex-champ and their damaged superstar. Nobody gets hurt, the public gets a good show, Dixon can burnish his image by helping Rocky out, etc. It goes without saying that Rocky's got other ideas. As he tells his old friend and trainer Paulie (Burt Young), he's still got "somethin' down here, you know, in da basement."

Stallone has always been aware of the racial discomfort, not to say bigotry, that these "Great White Hope" movies have both energized and capitalized on. As usual, he addresses it here without quite doing so directly. Rocky befriends a biracial neighborhood kid (the son of his almost girlfriend) and defends him from Paulie's ugly comments. White spectators' unanimous hostility toward Dixon is clearly meant to be disturbing. (Boxing promoters can only wish that the real-life public cared this much about their debased sport.) I don't think Stallone is trying to portray Rocky as a progressive so much as an innocent, who can sail right over the minefield of race relations in America, and in boxing, without even noticing it.

As always, Stallone is channeling legitimate fragments of boxing history. The first "Rocky" was clearly inspired by the story of Chuck Wepner, a no-name from Bayonne, N.J., who knocked down Muhammad Ali in a 1975 match (although Ali ultimately won the fight). Similarly, in "Rocky Balboa" Stallone is referencing George Foreman, who came out of a long retirement and won the heavyweight championship in 1994, at age 45. Stallone himself is now 60, and Rocky's age in the film is (wisely) left unspecified, but one can still say there's a tiny germ of plausibility beneath this story.

Still, it's not enough plausibility to be actually, you know, plausible. Rocky's fight with Dixon is impossibly paced, rock 'em sock 'em action, even more like a video game than the fights in earlier "Rocky" movies were. Of course I won't tell you whether Rocky wins or loses, since the message of the movie is that that doesn't matter. What matters is that all of us, no matter what age we are, should follow our dreams and dare to believe in ourselves. Especially if those dreams and that daring lead to our enduring, and administering, a prodigious ass-kicking.

Of course "Rocky Balboa" isn't really about boxing. It's about Sylvester Stallone's own fairy-tale quest to become relevant again, to recapture the pop-culture championship, after a long (and involuntary) semiretirement. It's an appealing and probably doomed enterprise, and it's not over. Stallone is planning a new "Rambo" movie for 2008. I guess he's still got somethin' in da basement, and he's going to haul it out whether we want to see it or not.