Maybe Bush didn't back down on wiretaps

Stop celebrating -- it's not yet clear whether the administration really intends to start obeying the law. 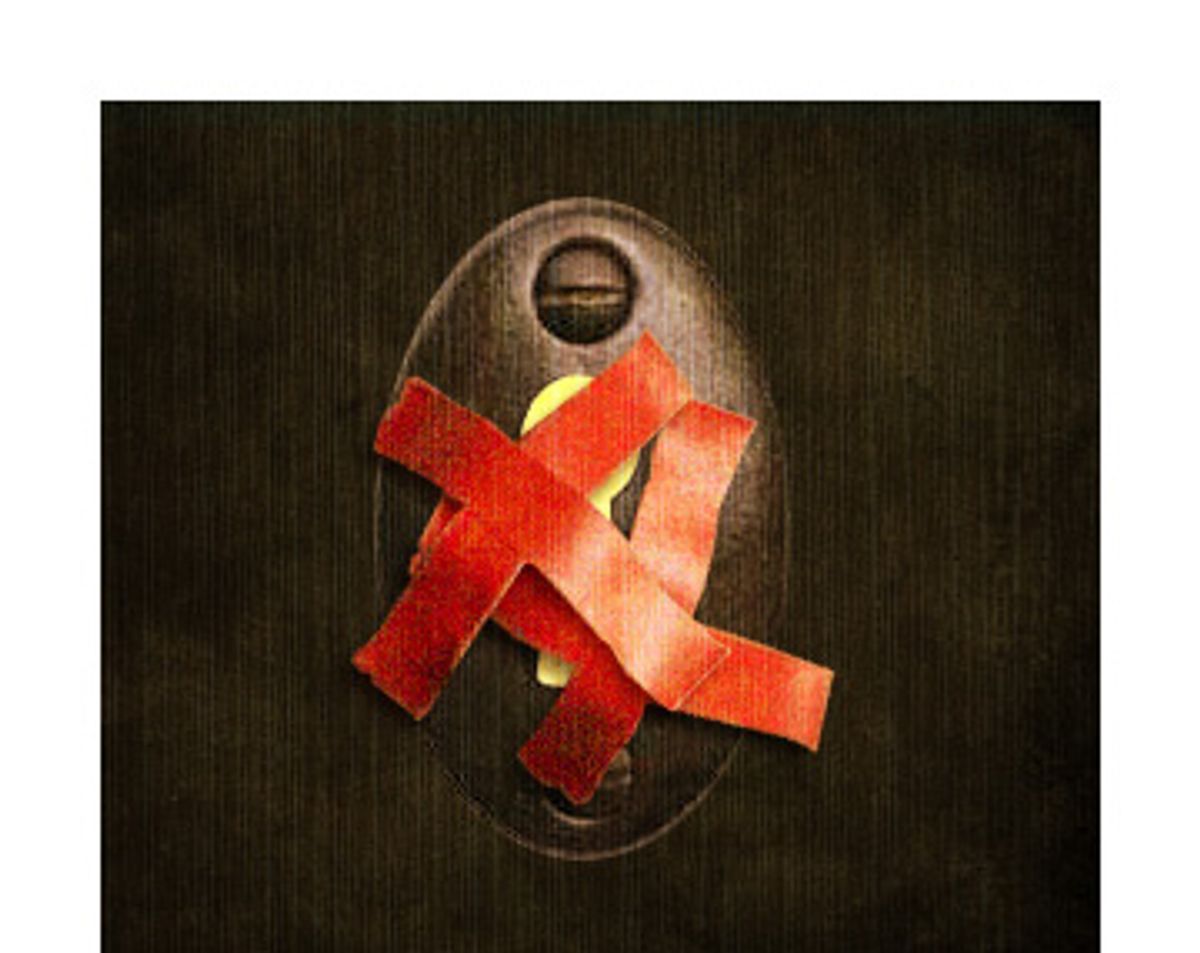 On Wednesday, Attorney General Alberto Gonzales notified the Senate Judiciary Committee by letter that the administration would now be seeking FISA court approval for wiretaps. As a result, the administration said that it will discontinue the president's so-called Terrorist Surveillance Program and will now instead conduct all eavesdropping under the purview of the Foreign Intelligence Surveillance Act, as the law requires. Not coincidentally, on Thursday morning, the attorney general will testify before the Senate Judiciary Committee. New chairman Pat Leahy and the rest of the committee's freshly empowered Democrats will, presumably, flay Gonzales for the Bush administration's failure to abide by the law for the past five years, press him to explain its sudden change of heart, and try to determine whether the administration's new posture will result in genuine compliance with both the spirit and the letter of the law.

On one level, it is encouraging that the attorney general has blinked and that he will be forced to answer questions from the likes of Russ Feingold at a hearing with the pleasing title "Oversight of the U.S. Department of Justice." And, all other things being equal, it is certainly preferable that the administration eavesdrop with oversight rather in secret. But on another, deeper level, there is no cause for celebration. We shouldn't be grateful when the administration agrees to abide by the law. That is expected and required, not something that occurs when the king deigns that it should.

But why might the president have agreed to cease violating the law? Last fall, a federal judge ruled that he had violated both the Constitution and criminal law, and an appellate court was about to hold arguments about that decision. And his loyal servants no longer control Congress. Clearly, a desire to avert a now inevitable confrontation with the courts and Congress over the lawless eavesdropping motivated the decision to abide by the law. Other than a rank fear of consequences, there is simply is no coherent explanation for the Bush administration's sudden abandonment of an illegal program that it had emphatically insisted was central to the "war on terror."

1) Why couldn't the new procedural rules pointed to by Gonzales simply have been instituted years ago, as part of a newly amended Foreign Intelligence Surveillance Act (which the administration requested and obtained from Congress in 2001, and which Congress repeatedly asked to do multiple times both prior to and subsequent to revelation of the president's lawbreaking in December 2005)?

2) If, as Gonzales claims in Wednesday's letter, the administration was working to develop new rules as early as the spring of 2005 to enable eavesdropping under FISA, why didn't it say so when the controversy arose over its lawbreaking?

3) For those who claimed that our national security was jeopardized and that terrorists were given our state secrets when the New York Times revealed that the president was eavesdropping without warrants, didn't Alberto Gonzales just "give the terrorists our playbook" by telling them how we are eavesdropping, i.e., that we are now doing so with warrants?

In January 2006, current CIA Director and former National Security Agency Director Michael Hayden warned that even discussing eavesdropping issues helps terrorists because it reminds them that we eavesdrop:

"You know, we've had this question asked several times. Public discussion of how we determine al-Qaida intentions, I just -- I can't see how that can do anything but harm the security of the nation. And I know people say, 'Oh, they know they're being monitored.' Well, you know, they don't always act like they know they're being monitored. But if you want to shove it in their face constantly, it's bound to have an impact."

Gonzales said this repeatedly, too -- that merely by raising the issue of eavesdropping, we remind terrorists that we eavesdrop. As a result, allegedly, they won't make the calls that they otherwise would have made to talk about their plots, and we won't know what they're doing and we won't be able to catch them.

Yet here the administration is not just reminding terrorists that we eavesdrop but detailing its new eavesdropping procedures in public.

4) Could the administration possibly think that this "concession" (what we call "obeying the law") is going to forestall or preclude congressional investigations into all of the eavesdropping it has been doing over the past five years without anyone watching? Clearly it won't, in either the Senate or the House. Here is new House Intelligence Committee chairman Silvestre Reyes on Wednesday:

"This announcement does not end our committee's interest in this matter. Until our committee has the opportunity to review the court orders and conduct in-depth oversight over this program, I am withholding judgment on whether it is effective and whether it protects the rights of the American people."

5) Is this magnanimous agreement to comply with the law supposed to relieve the administration of the consequences of lawbreaking? Defense Tech quotes Patrick Keefe, author of "Chatter: Dispatches From the Secret World of Global Eavesdropping," as wondering whether the "agreement" with the FISA court described in Gonzales' letter includes some sort of retroactive approval by that court for prior eavesdropping. I find that extremely difficult to believe -- among other things, retroactive approval beyond 72 hours of eavesdropping is barred by the FISA statute.

6) Is the Bush administration now going to tell the U.S. Court of Appeals for the 6th Circuit that there is no reason to bother with figuring out whether federal District Court Judge Anna Diggs Taylor was correct when she ruled recently that the president violated both the Constitution and the law by eavesdropping on U.S. citizens without the warrants required by law? That appellate decision is likely months away, but another highly respected federal judge in New York is expected to issue a ruling shortly on the legality of the Terrorist Surveillance Program.

7) The administration line now is that the problems with FISA were procedural -- i.e., that the process of obtaining warrants was too slow and cumbersome. In reality, the administration complained as much if not more about the substantive requirement under FISA for obtaining a warrant. It claimed that the requirement to show "probable cause," rather than mere "reasonable basis" (the standard under its illegal program), meant that it could not do the eavesdropping it needed to do to stop terrorists. The supposed problem with FISA was not the procedures but the substance of the law itself.

Perhaps Sens. Leahy et al. will raise some of these points with Attorney General Gonzales on Thursday morning. And perhaps we will find out what the administration actually intends, because we still do not know the details or mechanics of how the administration's eavesdropping will be conducted in compliance with FISA. Has a general warrant been issued approving of the program itself? Have so-called anticipatory warrants been issued by the court to allow the administration in advance to eavesdrop whenever specifically defined circumstances arise? Or will the administration be required, on a case-by-case basis, to apply to the FISA court for permission to eavesdrop and be further required, as the statute contemplates, to make a probable-cause showing?

If the administration has changed its eavesdropping program to some extent, but is still not fully complying with FISA, then nothing of significance has occurred because the administration is still violating the law. One cannot yet exclude that option. Gonzales' letter affirms, as one would expect, the administration's belief that it was legally entitled to violate this law. That means that it can violate it again at any future point, it can violate other laws under the same theories, and whatever other lawbreaking is already occurring as a result of those theories is not going to stop.

But if the administration is now complying fully and exclusively with FISA when eavesdropping, all of its prior claims that it could not do so and still fight terrorists are false. These are claims that, incidentally, the administration tried to use to win the last election; if you wanted to make it comply with FISA, it meant that you loved the t`errorists. But the arrogation of power in failing to comply with FISA was always about only that -- power. An administration with a radical theory of executive power grabbed what it could while Congress was compliant.

But whether the reversal is partial or total, reversal is standard operating procedure for the Bush White House. Every time it is about to face consequences for its conduct, it stops doing what it is doing and finds another way. When the Supreme Court was about to rule on the legality of its detention of Jose Padilla, the administration transferred him to a criminal court and finally charged him, thentold the court that the questions about his detention were "moot." When the Supreme Court in Hamdi v. Rumsfeld ordered the administration to give Yaser Hamdi (a U.S. citizen) a venue to charge him with a crime and prove his guilt, it simply let this extremely dangerous terrorist go free instead of charging him.

This is what the Bush administration does and how it always operates. It has not conceded anything and it has certainly not done anything that mitigates its lawbreaking -- its crimes -- over the past five years with regard to eavesdropping without warrants. The president has been committing felonies on purpose and systematically for the past five years because he wants to. The fact that he might have decided he should stop does not excuse his lawbreaking and must not be allowed to shield him or anyone else from accountability.