"Chicago 10" kicks it off with '60s themes that reverberate today. 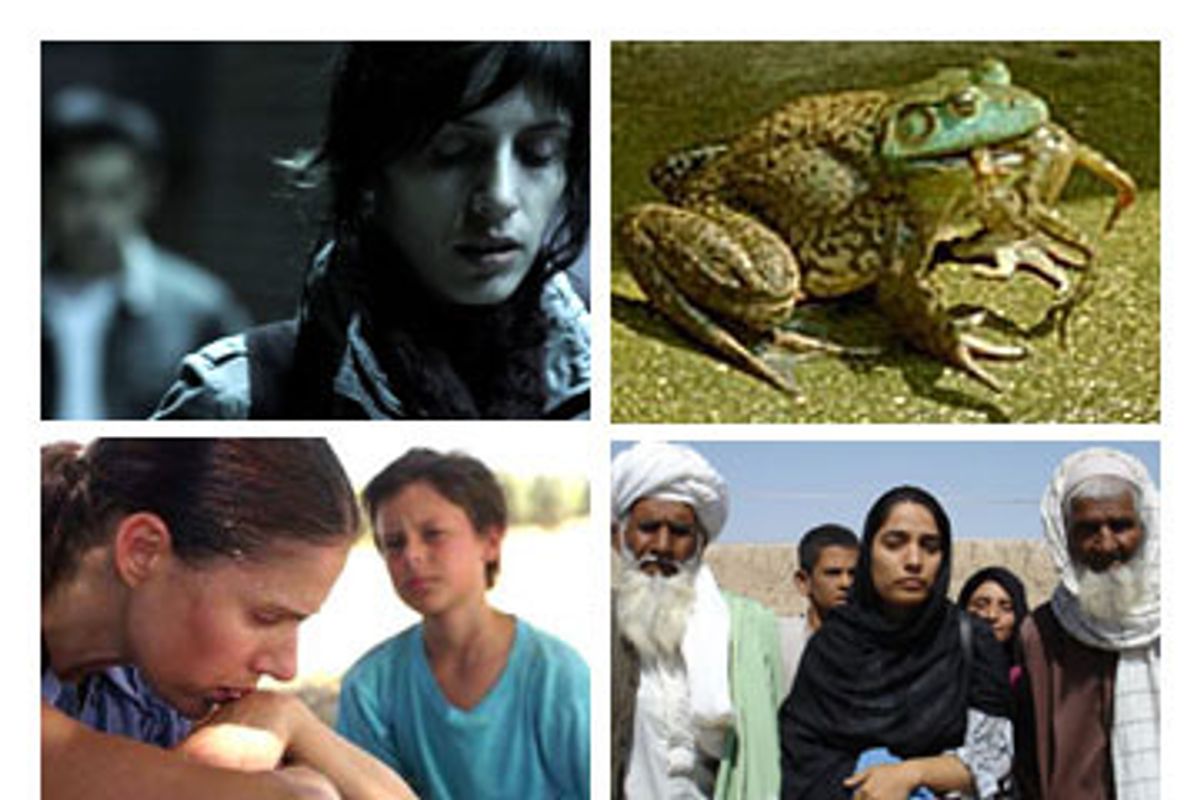 An hour or so before arriving at the Sundance Film Festival, I stopped off in Salt Lake City for a burger and got to hear the latter stages of a conversation between a white supremacist and his gay friend. They were talking about tolerance. Then I drove 40 more minutes up into the Wasatch range to this sprawling ski resort, its condos, hotels and McMansions spread out below a frozen sky, to watch an audacious movie about the 1968 Democratic Convention protests in Chicago.

Sundance has essentially become two festivals: One of them is still a treasure hunt for "undiscovered" wonders -- I use the quotation marks because every film in this fest has already, by definition, been discovered by someone -- and the other is a P.R. extravaganza for semimajor pictures already well along the money-slick freeway toward a screen near you. Thankfully, those two streams converged with unusual grace on Thursday night in the world premiere of "Chicago 10," an exhilarating, sure-to-be-controversial film that is like nothing you've ever seen about the '60s before.

Sundance juries have had a distinctly mixed record when it comes to handing out awards ("American Splendor," in 2003, was the last winner of a Grand Jury Prize to make any serious splash afterward), but the festival's programmers do tend to get the party started in fine style. This marks only the second time they've picked a documentary as the opening-night feature (Stacy Peralta's surf pic "Riding Giants" kicked things off in 2004), but "Chicago 10" is no ordinary documentary, and no ordinary anything else either.

How do you create a fresh take on perhaps the most mythologized period of recent American history? In writer-director Brett Morgen's case, the answer is by ignoring or breaking all the rules of documentary film, and by smashing the historical vitrine that has long contained these events and dragging them out into the light. Sure, there's historical footage in "Chicago 10," and lots of it. But I've watched a lot of documentaries about '60s politics without seeing any of this stuff.

During the legendary street confrontations between yippie protesters and increasingly brutal squads of Chicago police, Morgen blends color and black-and-white, switches from TV footage to amateur hand-held cameras and back again, sets the whole thing to more contemporary music. Yes, you heard that right. No Dylan, no CSNY. No "Revolution No. 9," no "Street Fighting Man." Instead, the battles of Lincoln Park and Grant Park are staged to the sounds of Eminem and the Beastie Boys. When you see the MC5 play for the assembled antiwar protesters, they sure sound great -- but that's because the band playing "Kick Out the Jams" on the soundtrack is actually Rage Against the Machine.

No video recordings were made at the infamous Chicago Seven trial, a spectacle of Soviet-scale repression, incompetence and corruption in which Abbie Hoffman, Jerry Rubin, Tom Hayden and four other protest organizers were convicted under a recently cooked up "anti-riot ordinance." (Morgen rebrands it as the "Chicago 10" trial because of the involvement of Black Panther Bobby Seale and lawyers William Kunstler and Leonard Weinglass, who were themselves sent to prison on contempt charges.)

Morgen goes even further here, re-creating long stretches of the trial from the transcript, using Richard Linklater-style motion-capture animation and actors reading the lines. Hank Azaria "plays" Abbie Hoffman, and Mark Ruffalo reads Jerry Rubin. Nick Nolte is the bombastic U.S. attorney, Thomas Foran, and Roy Scheider is Judge Julius Hoffman, who never even pretended to conceal his disgust for the seditious defendants. Living participants were interviewed about their memories of the trial (Weinglass actually reads his own dialogue), but one could argue that this material isn't documentary at all.

Seeing this epochal event of the '60s rendered as a trippy, sci-fi-flavored cartoon will undoubtedly rub some viewers the wrong way. But I suspect those are not the viewers Morgen is concerned with. He has remarked, somewhat cryptically, that his film employs elements of the '60s but is actually set today. I can tell you this: When we see Lyndon B. Johnson, early in the film, give a speech telling the American people that an additional 25,000 troops will be needed to stabilize the situation in Vietnam, an audible gasp rippled through the press-screening audience.

In its best moments, and they are considerable, "Chicago 10" makes you see 1968, that near-apocalyptic year, with fresh eyes, as an extraordinary turning point in history now at least partly set free from boomer nostalgia and regret. Rubin, Kunstler and, especially, the cynical, clownish and wise Abbie Hoffman come alive as real people, not just marijuana-flavored avatars. (My favorite Hoffman one-liner: When asked by a reporter what he thinks of the trial, he cackles and says, "Well, I've got a great seat.")

As with the LBJ speech, the similarities between 1968 and 2006 are evident: an unpopular overseas war, a presidential administration foundering on the rocks, a sharply divided populace. But so are the differences, and they are striking too. If anything, the antiwar movement of the past four years has been larger and better organized than anything the Vietnam era produced, at least at a comparable stage. Since 2003, the movement against the Iraq war has repeatedly turned out protesters by the hundreds of thousands. Feb. 15, 2003 (a few weeks before the war began) was the largest coordinated day of international protest in history. The Vietnam protest movement never accomplished anything on that scale; the Chicago convention protests involved fewer than 20,000 people all told.

But for a complicated set of historical, generational and ideological reasons, the narrative we have inherited goes like this: The '60s protests were huge, idealistic and earth-shattering; all subsequent protest is a lame imitation. One principal reason for this is that latter-day protest movements have not produced charismatic, media-friendly, middle-class leaders like Hayden, Hoffman and Rubin. As has often been argued, those figures have not emerged recently because middle-class college kids are in no danger, at least so far, of being drafted.

Also, recent protest movements have clashed with cops only in local, relatively contained and theatrical situations. It's difficult, although perhaps not impossible, to imagine anything like the vicious mob mentality of the Chicago Police Department in 1968 happening again. Watching Morgen's movie makes you understand, with pungent force, that anyone who claims America has never been closer to fascism than it is today is simply wrong.

Morgen clearly wants his movie to carry a galvanizing message to the Youth of Today. And who knows? Maybe it will. That's not for a passel of parka-clad showbiz insiders trapped in an overpriced ski resort to decide (suckers for social relevance that we are). Even as the thermometer dropped below 10 degrees Fahrenheit on Thursday night, everywhere you went in Park City people clustered in little groups, murmuring over "Chicago 10." (There was an especially good critics conclave in the produce section at Albertson's.) I'll report back soon on what ought to be an action-packed weekend, but the big, silly party in this frigid little town is off to a hot start.