"American Idol" runner-up Katharine McPhee on her debut album, her brush with Scientology and how "Idol" can be like prison. 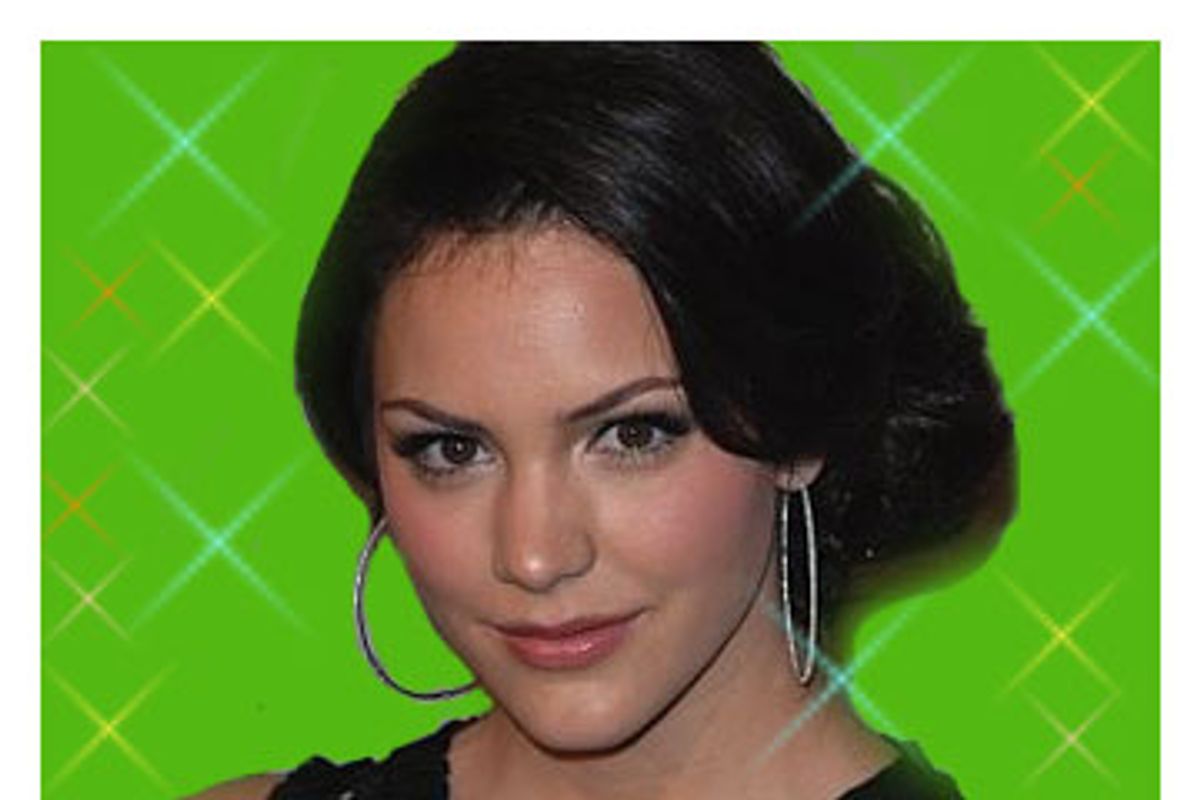 She may have been beaten by Taylor Hicks in the finals of last year's "American Idol," but Katharine McPhee has attracted a level of attention that bodes well for her recording career -- which kicks off on Jan. 30 with the release of her oft-delayed debut, "Katharine McPhee." The California native's freshly scrubbed good looks and her sure way with a ballad won her fans on "Idol," but it was her confession that she'd battled with bulimia and speculation about her dabblings in Scientology (and a possible invitation from Tom Cruise and Katie Holmes to sing at their mega-wedding) that kept her in the headlines. In the midst of a whirlwind promotional tour that includes the "Today" show, "The Tonight Show" and even an appearance on the heavily hyped Lonelygirl15 video blog, McPhee, 22, spoke with Salon about her self-image, the chatter around her personal life and why the "American Idol" contestants are like "inmates."

Was it a challenge for you -- as somebody whose background is not really in pop singing -- to come in and make this kind of record?

You got a fair bit of attention in the media last year for things that had nothing to do with your appearance on "American Idol" or your music. I'm thinking about your struggles with bulimia and that weird Scientology thing that came up. What was it like for you to go from somebody whom no one ever knew about [to having] millions of people know about your health problems?

Yeah, just weird rumors about you that aren't true. That's definitely strange and puts you on edge. And it feels like you have to defend yourself, but you just learn. People are never going to believe everything you say and you've got to just say what you want to say because it's your truth and people will believe you or people won't. You have to learn so quickly on "Idol" how to deal with press.

What has been the most important thing to learn?

Take it in stride. To be gracious is the best way to deal with it.

The bulimia issue -- you were interviewed in People magazine, so obviously you had some input in that coming to light. How does an issue like that end up in public?

Every interview I did after "Idol" was, "So, how many sizes have you lost?" and "How much weight have you lost after you were on 'Idol'?" People are obsessed with that. To be honest, I'm so fricking over it -- I could say the other word but I won't. I'm so over people being obsessed with the way I look. It's like, "You know what? The real reason I'm a healthier body size is because I'm finally healthy." The woman who was interviewing me [for People] was so sweet and it felt like the right time, and again she was asking me how I did it and what diet I used. I didn't do a diet. I went to a treatment center and got healthy and that's really how I became the body size I am now.

Do you feel some sort of responsibility to talk about these things now that you're in the public eye?

Yeah, I do. I'm still a crazy person in my head. I still obsess over the way I look sometimes and don't like what I see. I definitely don't claim to have it all perfect as far as the food issues and stuff. The body image is always what's left over. For me, I just try to keep a positive body image as much as I can. There are definitely days when I'm like, "I need to lose five pounds." But I've also done that my entire life -- except when I was a kid. Ever since my teens I always was like, "I've got to lose five more pounds." And then I do think to myself, Katharine, if you lose five more pounds intentionally, think about all the interviews you've done about being healthy -- how hypocritical I was going to come out looking. So I definitely feel a responsibility.

Has it been more difficult for you now that you've become famous?

Why do you think that people were so interested in the idea that you may or may not have dabbled in Scientology?

Because Tom and Katie were so big at that time and there was so much controversy about it.

Are they friends of yours?

No. I actually just did meet them the other day and they were the nicest people I think I've probably ever met. I'm not a Scientologist. I've clarified this rumor over and over again, but people will keep saying that I am, but whatever. I took a couple of courses. It was really all about a guy. It was a guy that I was totally obsessed with -- not obsessed with but totally into and, you know, guys and girls can do that to our lives and make us think we're into something that we're not. But I don't say that Scientology is a bad thing. I met a lot of wonderful people in Scientology, so when I say I'm not a Scientologist I don't mean it like "I AM NOT A SCIENTOLOGIST!" I actually had a very positive experience in Scientology; I just chose that it wasn't for me.

So the rumor that you sang at Tom and Katie's wedding was false?

Yeah. It was false.

The new season of "American Idol" is starting, so looking at that and at your experience, is there anything you would change about the way the show is run?

I don't know; the formula's working. Was it always enjoyable for the people on the show? No. But ultimately do they care? The show's doing well so why would they change anything?

What did you find challenging?

I think the controlling of it. Us [the contestants] being like we're inmates, not being able to really see our family that much even if we lived in the area.

I think that's something a lot of people don't know. That you guys live in dorms while the show is taping.

Not dorms. We live in a hotel for a month, then we move to apartments. They don't allow family and friends in the hotel rooms. It's a little bit much. Towards the end you have security with you 24 hours [a day]. I don't honestly really believe that someone is going to get attacked. It's not like we're Tom and Katie, you know? That's different. I think they hype that a little bit.

Is it true you snuck out at one point?

Yeah. I loved it. It was fun. It definitely was fun. It reminded you of being in high school or college again -- being bad. It was really easy to sneak out.

A lot of the pictures I've seen of you lately are a lot racier than you were on the show.

It grabs your attention. It definitely doesn't mean that I walk down the street in thigh-high boots and a short dress. It's an image. It goes back to the music. When you're on "Idol" you don't think that what kind of outfit you're wearing is going to affect the image of your record. But it goes with the music.