A compelling Iraq war thriller that will entertain and upset you. Plus: A lesbian screwball comedy, and Nader raids the big screen. 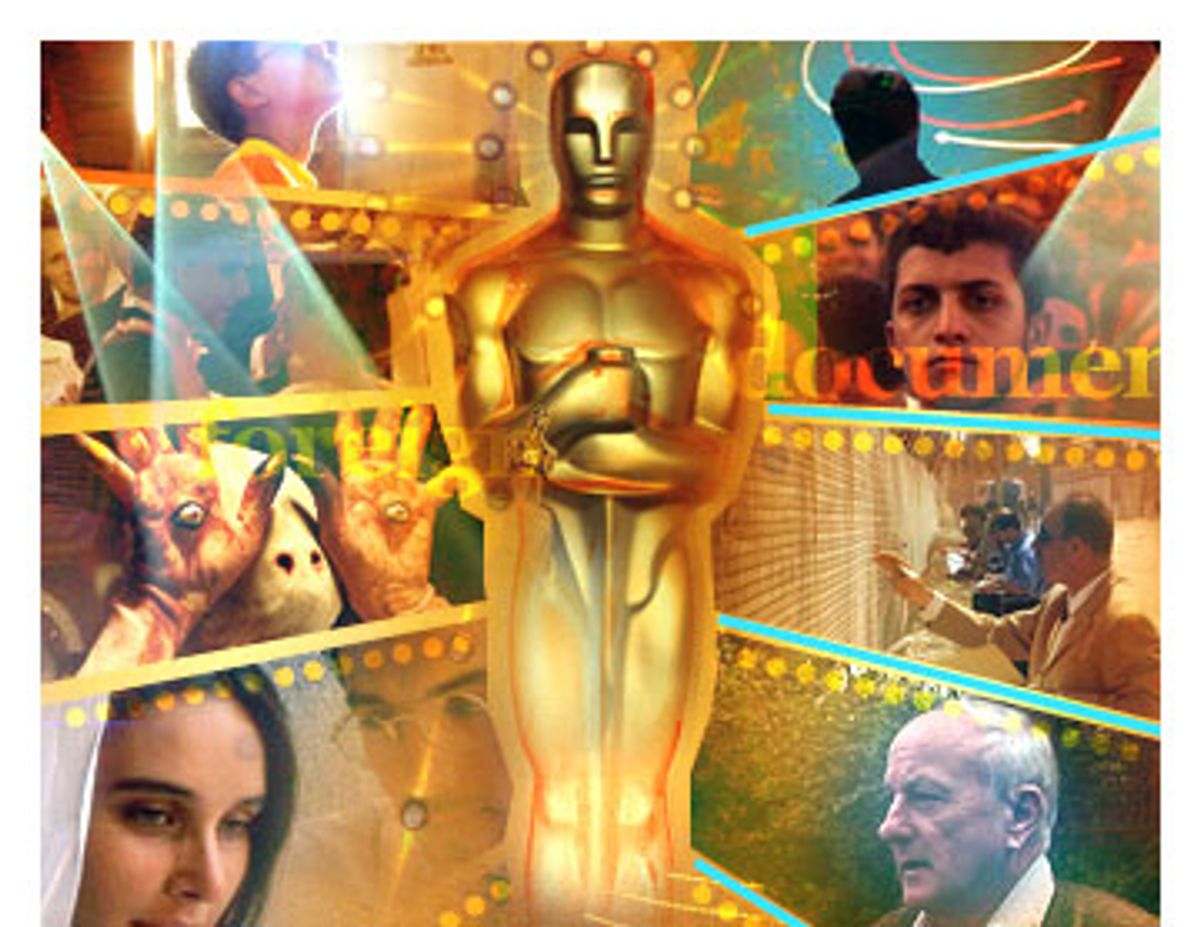 "There's no truth, you know," a CIA official tells an idealistic young colleague in "The Situation," the compelling new Iraq war thriller from veteran indie director Philip Haas. "There are no bad guys and there are no good guys. It's not gray, either ... There's no truth! It's lost in the fourth dimension of time."

Those lines, and the extraordinary monologue by Dan Murphy (played by Damian Lewis) from which they come, express the ambiguity at the heart of "The Situation," an uneven but impressively ambitious picture that depicts the contemporary Iraq conflict as an existential and moral heart of darkness. Made rapidly and on the cheap (in Morocco), and written by Wendell Steavenson, a journalist who has reported from Iraq, "The Situation" claims the prize of being the first American narrative feature to address the war directly. (Perhaps 20 percent of Irwin Winkler's "Home of the Brave" is set in Iraq, but that film is principally about soldiers' difficulties on coming home.)

Best known for his 1995 adaptation of A.S. Byatt's "Angels & Insects," Haas here imagines Iraq as the sun-bleached setting for an especially bleak film noir, in which love is treacherous, good intentions lead you-know-where and the line between good and evil is always shifting. For the first few minutes of "The Situation," you may worry that you're about to see a didactic fable about evil Americans oppressing virtuous Iraqis, but Haas and Steavenson's scenario is nowhere near that simple.

It's true that in the film's opening scene some United States soldiers throw two Iraqi teenagers off a bridge, out of sheer cruelty and cussedness, but given what we now know about Abu Ghraib and the various reported civilian massacres, that doesn't seem exceptional. Furthermore, there are Iraqis in the film, such as the shadowy local chieftain Sheik Tahsin (Saïd Amadis) and the ruthless insurgent leader Walid (Driss Roukh), who make the boorish, racist Americans look like Boy Scouts.

Into this maelstrom comes Anna (Connie Nielsen), a blond, long-legged magazine reporter looking for the human stories beneath the deadening daily news broadcasts. (I don't know how closely Wendell Steavenson resembles Nielsen, but despite the first name she too is a literary-minded female journalist.) Tangled in a romantic triangle between Dan, the CIA agent played by Lewis, and the handsome Iraqi photographer Zaid (Mido Hamada), Anna breezes through Iraq with noble intentions and a head scarf fashionably draped over her golden locks -- and trails discord and jeopardy behind her, like the aroma of Chanel No. 5.

Sometimes Steavenson's dialogue is a little clunky and expository, and a few of the supporting characters seem underdeveloped. But "The Situation" is a highly developed moral landscape, painted, as Dan suggests, in rapidly shifting colors rather than black, white or gray. No one is demonized: Not Dan, who genuinely believes he can use American money and power to rebuild a functioning Iraqi society, and not Walid, a former Republican Guard officer turned insurgent leader who wants approximately the same thing. It's a land of chaos and murder, but none of it can be boiled down to good vs. evil; death, in this film's Iraq, can come for a million reasons or none at all.

In a phone interview this week, Haas said he's proudest of two things: He portrays numerous Arab characters as complicated, full-fledged human beings; and soldiers and others who've been in Iraq say he has captured the anarchic situation accurately. "If you look historically at films made about U.S. war abroad -- and I guess I'm talking about Vietnam films -- they were all made after the fact and they're all about Americans," he says. "Even in 'Apocalypse Now,' as great a film as that is, the Vietnamese are faceless. I wanted to do something that was immediate and that provided the Iraqi characters with some humanity."

He recruited Arabic-speaking actors from all over the world, many of whom were grateful to play characters who weren't terrorists or suicide bombers. Amadis, an Algerian-born actor who plays the Samarra power broker Sheik Tahsin, was seen in "Syriana," while Omar Berdouni, who plays Anna's translator, was one of the 9/11 hijackers in "United 93." Mahmoud El Lozy, who has a terrific turn as a senior Baathist diplomat who feeds information to the occupying forces, is actually a theater professor at the American University in Cairo. (Apparently, Arabic speakers will notice that the spoken dialogue is in classical Arabic rather than the Iraqi dialect.)

"We've had a really positive response from soldiers who've seen the film," Haas continues. "And even from conservatives who support the war. We showed it to a Navy SEAL officer one of my crew met on an airplane, and his view of that opening incident, when the soldiers throw those kids off the bridge, was, 'You know, shit happens.' This movie isn't exactly about being pro-war or antiwar. The war is what it is. Frankly, I think if Bush saw the film and really thought about it, he'd say, 'Yeah, it's a crazy place.' I mean, the occupation has been a disaster. It's not like that proves that Iraqis are good and Americans are bad."

To date, none of the documentaries made about Iraq have attracted much of an audience, although two of them -- James Longley's "Iraq in Fragments" and Laura Poitras' "My Country, My Country" -- have now won Oscar nominations. (Winkler's "Home of the Brave" also vanished rapidly, despite a terrific performance from Samuel L. Jackson.) Early reviews of "The Situation" have been highly positive, and Haas is hopeful that his film can break through the apparent public distaste for this subject matter.

"With documentaries, as good as they may be, for a lot of people seeing them is like taking medicine," he says. "I think this is an engaging story with challenging characters that will keep you watching. I hope this will entertain people, in its own grisly fashion. It's an upsetting film, but, you know, so were 'Taxi Driver' and 'Chinatown.'"

"The Situation" opens Feb. 2 at the Angelika Film Center and Lincoln Plaza in New York; Feb. 9 in Los Angeles and Washington; Feb. 16 in Stamford, Conn.; March 2 in Boston, Chicago, Philadelphia and San Luis Obispo, Calif.; and March 16 in Dallas, Houston and Santa Fe,. N.M., with more cities to follow.

"Puccini for Beginners": The incredibly true adventure of two girls (and a guy) in love
Here's the indie-film economy at work: You come back from Sundance and right away you get more Sundance movies. The ones from last year. Writer-director Maria Maggenti's lesbian-crossover Manhattan screwball comedy, her first film in 11 years (after "The Incredibly True Adventure of Two Girls in Love," something of a groundbreaker in 1995), has been kicking around the festival circuit all year, pleasing crowds but not quite finding a pathway into theatrical release.

Thanks to the intrepid folks at Strand Releasing, probably the best purveyor of gay-oriented indies, here at last is "Puccini for Beginners." It's the story of Allegra (Elizabeth Reaser), a neurotic Italian-American lesbian writer (hmm...) who gets entangled in an unexpected affair with a man and, unbeknownst to him, with his estranged girlfriend. It reminds me both why Maggenti is so appealing and why she's spent the last decade writing Hollywood scripts and episodes of "Without a Trace" instead of making her own movies.

First the good stuff: Maggenti writes hilarious dialogue and is one of the few genuine intellectuals in this business. She can combine slapstick goofballing with jokes about Kantian philosophy. Her little essay about the making of this film in the press booklet is one of the most refreshing and honest pieces of self-promotion I've ever read, a masterpiece of its genre. (Maybe I should publish that, instead of reviewing her film.) She has a fine eye for actors, and her all-female ensemble cast, supported by Justin Kirk -- my favorite undiscovered New York actor of the moment -- is delightful to watch. I enjoyed "Puccini for Beginners" from beginning to end, pretty much, and laughed aloud six or seven times.

Gretchen Mol is a blast as Grace, the ditzy, wholesome gal who gets dumped by philosophy professor Philip (Kirk) and then falls hard for Allegra, who is already doing the nasty with Philip on a regular basis, despite repeatedly assuring him that she's a lesbian who doesn't "do this." Jennifer Dundas and Julianne Nicholson are also good as Allegra's straight friend and the ex who broke her heart, respectively. (You can see Kirk and Nicholson together in Jeff Lipsky's "Flannel Pajamas," my favorite New York micro-indie of the last year.) Funniest of all is the ramrod-straight Tina Benko as another Allegra ex, an imperious, fire-breathing, German-speaking magazine editrix from hell.

Sounds great, right? What's the problem? Well, I don't know how to say this nicely, so I won't try. I'm not sure Maggenti could direct a cardboard box to lie on the sidewalk. Her visual style is so anti-aesthetic, so TV-flat (in the old, 1980s sense of TV, not the "Sex and the City" sense), that it has to be a deliberate choice, or a compulsion, or a kind of blindness. Almost every scene is spatially constricted and awkward, as if she'd turned on the camera during a warm-up rehearsal, before the actors had done their stretching exercises.

They're good actors and they get warmed up eventually, but the whole movie has a herky-jerky quality, as well as a self-conscious, Woody Allen-esque New Yorkiness, that makes for numerous cringe-inducing moments. Maggenti views all her characters, and especially Allegra, with sardonic generosity, and I have no argument with her desire to liberate female sexuality -- and everybody else's -- from the fetters of gender and sexual identity. (In fact, it's the "straight" characters, Philip and Grace, who see Allegra most clearly as Allegra, rather than a lifestyle representative.)

As much as Maggenti is to be commended for attacking current stereotypes around women and sex, whether they're retailed by "The L Word" or "Desperate Housewives," she sabotages herself by making a movie so awkward that those shows look like brilliant cinema in contrast. It's a cliché to say that a movie will divide audiences, but "Puccini for Beginners" may divide individual audience members. It divided me; rarely have I seen a film simultaneously so good and so bad.

Mantel and Skrovan's agenda is clearly to rehabilitate the image of the man who took on General Motors nearly alone, invented modern consumer advocacy and convinced ordinary citizens they could battle corporate power and win. That alone may send Nader-haters into apoplectic fits, but in fairness the film does not hide from the more controversial and indeed troubling aspects of Nader's legacy. Mainstream liberals like Todd Gitlin and Eric Alterman are given ample time to deride Nader as an egomaniacal, destructive force who single-handedly elected George W. Bush. Some even suggest that was his plan the whole time.

Indeed, by devoting the second half of their film (a touch long, I would say, at 122 minutes) to the 2000 controversy and its still-bitter aftertaste, the filmmakers run the risk of undermining their entire project. If you can detach yourself from the back-and-forth vituperation (perhaps an impossible project), the Nader story begins to resemble a grand tragedy about the American left, to which Nader's own arrogance and the Democratic Party's compulsive tendency to crumple and compromise both contributed. As New York Times critic A.O. Scott has observed, "An Unreasonable Man" played in the same Sundance lineup last year as "An Inconvenient Truth." Al Gore and Ralph Nader will never escape each other, even at the movies.