Yoko Ono talks about fame, John Lennon, and teaming up with Cat Power and the Flaming Lips on her new album. 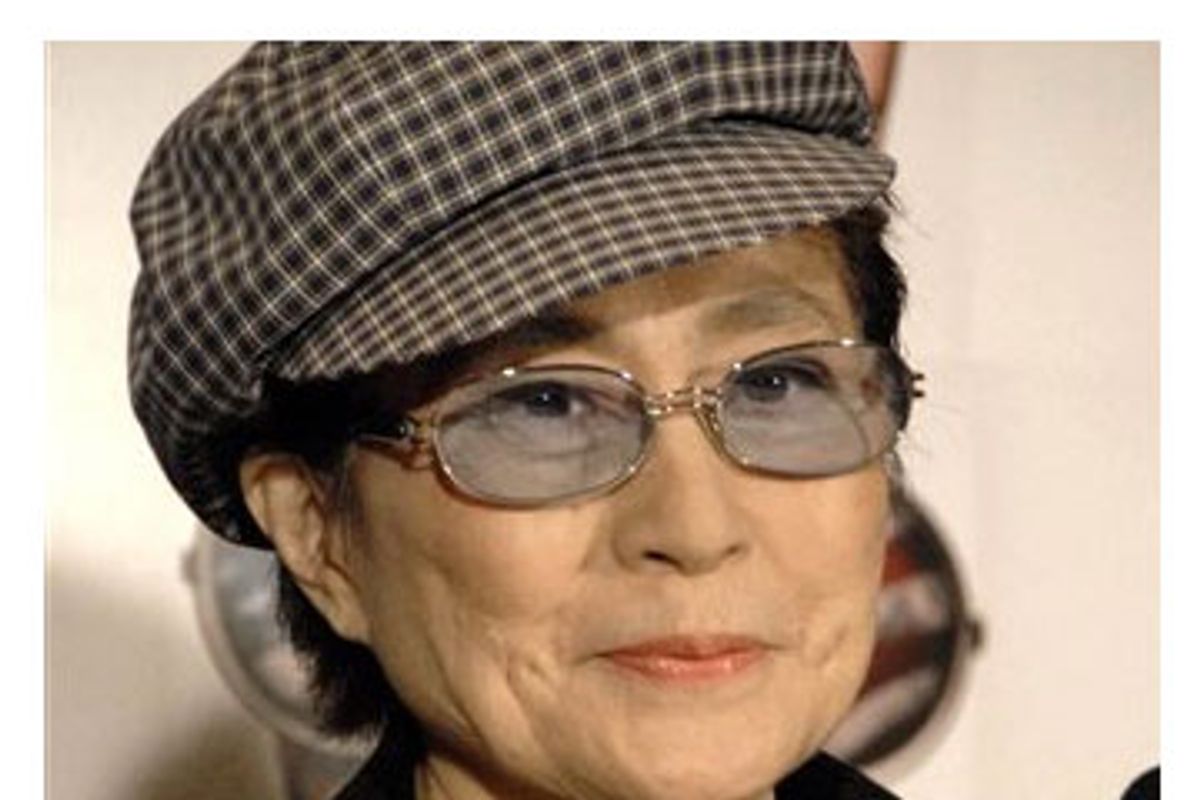 For Yoko Ono, fame is a paradox. When Ono met and married John Lennon, she was already a well-known conceptual artist, drawing attention for work like "Cut Piece," where she sat onstage and invited audience members to use scissors to cut away at her clothing until she was naked. But once she married the smart Beatle, it might be fair to say that Ono became the world's most famous artist whose art you know almost nothing about.

Her work has long been eclipsed by her fame. But that may be starting to change. The 73-year-old Ono's new album, "Yes, I'm a Witch," features the cream of the indie music crop (Cat Power, the Flaming Lips, Antony of Antony and the Johnsons, and others) reinterpreting their favorite Ono music by creating new backing tracks for her original vocal performances. That musicians who came of age long after the Beatles broke up are responding to her music comes as vindication for Ono. "It just means that my work had power of its own," she says. "It wasn't overshadowed by John or the Beatles."

Salon spoke with Ono about the new album, what her art might have been like if she hadn't been so famous and whether one ever gets used to life in the public eye.

The people who collaborated with you on the new album are a pretty diverse list. Were they all people you felt some sort of musical kinship with?

These are indie music people, superstars of indie music. They're very heavy people actually -- heavy musicians, heavy songwriters. I'm very pleased that they even bothered to do it. Each of them are very strong people, strong bands, so it became a very strong CD.

Do you think there's anything in the treatments they gave your music that changed how you saw your original compositions?

I was having fun with it. I just felt great. Because each time I felt there was something totally different. There was creativity that they put on. It just gave a new aspect of that song -- which is very nice.

Was the eagerness of people to collaborate with you validating? For a long time your music was overshadowed.

Do you think it has taken time for your work to be judged on its merits? Is that why now we're seeing more musicians into your music?

It just means that my work had power of its own. It wasn't overshadowed by John or the Beatles. And that's great. My feeling is that I was an indie artist in those days single-handedly and now I'm just part of the indie trend. It's great. Indie music is "it" now. It's kind of a revolution to the music: 1980s, 1990s music was getting very sanitized; they were complying with the music industry. Music was getting more and more dead in a way. Now, because of the social climate that's very severe, the artists are compelled to start being real. It's really great that indie music is now. It's future, but it's now too.

Do you think, now, with the music world as fragmented as it is --

It's very easy to say "fragmented as it is." In the '60s, people were still very protective of each field that they belonged to. Avant-garde artists didn't know about rock or pop or jazz. And the jazz people of course didn't want to know about any other music. They were all just kind of protecting their territory. Now it's different. Fragmented is not the word for it. I think it's very nice that everybody has everything at their disposal. They can use anything.

To what extent are you considering the form of the pop song when you write music? Or are you thinking more conceptually?

Well, when you listen to all the songs on the CD, you will notice that each one is covering a different genre. That's what I like about it. I was always doing that. When you listen to my CDs you will notice that it's not really covering just one genre. You can't say "pop rock" or jazz or whatever. It's all very different. I like it that way. I think it's great that I'm doing [music] in many different styles. And also the idea of being an avant-garde artist and saying "I'm avant-garde and that's it" or something -- again, you're limiting yourself with that label. When I was in the avant-garde, I was really there, but at the same time I was thinking, "Don't take it too seriously, please." I was moving away already.

Before you met John, you were already a well-known avant-garde artist. For the last 40 years, you've lived in the public eye to a certain extent.

How does that affect your relationship to art? Your life is not what it was when you first started.

I don't feel that way. I'm just me. I was always just me. I was starved during the Second World War and evacuated as a child to some country house. Well, I was still me. When I was living in a rather extravagant environment when I was a little girl -- that was still me. In other words, the environment doesn't really -- it does affect me in a way. All different environments were educational, let's put it that way. But it didn't change me.

Your fame afforded you a large platform for your views. Do you think you would have been as compelled to engage in politics or social issues if you felt your platform wasn't --

I was always engaged in politics. Please. When I was sitting in a bag or something and saying I was doing that for world peace in Trafalgar Square, I was not that famous. Well, I was a famous avant-garde artist, but it wasn't really translated into world fame. I was known in London, and the journalists would come and say, "Is that Yoko?" because I'm in a bag or something standing in Trafalgar Square, and I would say, "Yes, yes, it's me." That was the extent of it. I was always political. But we are all political. We have to be because all of us are social animals. Of course we are political, just by not being political even. So I was political, yes.

So you don't feel you would have been a different type of artist if you had not been so famous?

No, no, I wasn't indie enough. Suddenly I wasn't invited to dinner parties by avant-garde artists.

Which is probably not a bad thing.

Well, I don't know. I felt very lonely because nobody was inviting me. And then John picked me up, so that's OK. It was really like that. Every turn of my life. It's literally like that. When I was a little girl I was in -- where was I? -- Long Island [where, as a child, Yoko lived from 1940 to 1941 before returning to Japan] or something like that, and the block that I was living in, it was OK. Everybody loved me and we all loved each other and there was kindness there. But two blocks away from that district and -- surprise, surprise -- kids were stoning me. Actually hurling stones at me. And the reason is because it was second anti-Asian time. All the films were showing and any enemy or any baddie was Asian. And then I went back to Japan and they were stoning me conceptually as someone who came back from a foreign land and my body movements or something were a little foreign. Then I was evacuated to the country [in 1945, after Tokyo had been fire-bombed] and the country kids stoned me because I was a city kid -- actually throwing stones at me. The thing is, it's a very strange life, but each time I was just me.

Just recently there was some negative stuff about your personal life that came to light. [Ono's chauffeur was arrested for allegedly trying to blackmail her with private conversations he had recorded.]

Don't say "came to light." The point is that there wasn't anything I was hiding. It was somebody making something up.

That's the wrong choice of words, but that occurred. Then today I was walking by a comic book store and they had 30 John Lennon dolls in the window.

Oh my God. I didn't know that there were dolls like that.

Do you ever normalize that level of public interest in your life?

Normalize that? I'm just being normal. A normal woman. Well, I don't know what a normal woman is, but I'm a woman and I'm Yoko and I've never changed that. It's not like I was insisting on being this one. But it feels like I'm trying to sort of expand my views and try to do something that's new and that's totally out of Yoko Ono, that's distant from what Yoko is. But then in hindsight that's very Yoko. I can't escape from myself it seems. And that's OK. I don't know what is normal. Do you know what is normal? You just grab one person out on the street and start asking what kind of life this person has, you'll be surprised that each one is very, very strange, you know what I mean?

What are your future plans?

Do you know what your future plan is? I don't have any goals. The fact is that maybe that was my strength -- I'm always living in "now" and hopefully don't get too bothered by the past. I don't think about what's going to happen in the future. The future for me is an open book. That's how I was always. I don't have a goal. I don't limit myself to a goal.