Bush supporters seek to depict war opponents as traitors and surrender-cowards, but that group now includes numerous Generals and the majority of American citizens.

Lt. Gen. William Odom is the former director of the National Security Agency under Ronald Reagan and head of Army intelligence. Last week, he authored a widely discussed and truly excellent Op-Ed in The Washington Post -- headlined: "Victory is Not an Option" -- which unapologetically called for withdrawal of our troops from Iraq, rebutted every myth propagated to "justify" our continued occupation, and documented what he called "the gulf that separates President Bush's illusions from the realities of the war."

Hugh Hewitt is a talk radio show host and Bush-loving lawyer who recently helped to form "The Victory Caucus," a group of bloggers (and Frank Gaffney) devoted to battling against those whom Hewitt and his comrades smear as the "White Flag Republicans" (Republicans who oppose the "surge"). The "Victory Caucus" devotes particular animus to what its tough-guy followers refer to as "the Surrender Resolution."

Last week, Gen. Odom was interviewed by Hewitt on Hewitt's radio show and it is a truly extraordinary interview. Needless to say, the Warrior Hewitt meekly suppressed all of his "surrender" and "white flag" accusatory smears when confronted by the anti-war General, and Odom provided a clinic for how the warmonger mentality of Hewitt and the Bush administration can and should be scornfully dismissed.

As a preliminary matter, it is hard to put into words how creepy and Orwellian not only the "Victory Caucus" itself is, but particularly the logo they have created:

Compare that to the logo used in the superb film V for Vendetta, which depicts a tyrannical government that relies upon fear-mongering and protective authoritarian leaders to justify its repression and endless wars:

Did the Courageous Warriors who formed the cyber "Victory Caucus" purposely choose a similar logo in a knowing act of self-mocking irony, or is this just yet another instance where political satire and science fiction cannot keep pace with the ever-expanding radicalism and reality detachment of the Bush administration and its hardest-core followers? It really is true that the hardest job on the planet is to be a satirist of the pro-Bush Republicans, because it is almost impossible to create caricatures extreme enough to stay ahead of what they actually become in reality.

In any event, the entire Odom interview (and his Op-Ed) ought to be read by every Democratic consultant and anti-war politician. So many war opponents and Bush critics feel compelled to express their opposition defensively and apologetically. It is common to hear them -- especially political figures -- prefacing their war opposition by bending over backwards to assure everyone that they are patriots, that they care about the troops, that they want to protect America, too -- as though those matters are legitimately in doubt.

But observe how Gen. Odom is not the slightest bit concerned by Hugh Hewitt's smearing tactics, how indifferent he is to the task of trying to persuade Hewitt that he really is a patriot. It is Hewitt's judgment and allegiances which are in question, not Odom's.

Perhaps his status as a General means that he is not worried about being accused of traitorous or cowardly behavior, but no American citizen who opposes this war or future ones ought to be concerned by that. It is war opponents who are have been defending this country's interests and who are therefore in the majority. And it is war supporters -- "the Victory Caucus" -- that have done incalculable damage and who have therefore been relegated to the fringe.

These excerpts from Odom's crushing of Hugh Hewitt illustrate how to make the case:

On the fear-mongering tactics used to oppose withdrawal:

HH: Now you also write in the article that we must, that you dismiss the idea it will get worse if we leave.

WO: No, I said it doesn't matter how bad it gets, it's not going to get better by us staying there. You see, I'm not one of those -- I personally think that we might end up finding less of a terrible aftermath than we've pumped ourselves up to expect, because the President and a lot of other people have really made a big thing of trying to scare us about that. What I'm saying is even if their scare scenarios turn out to be the case, that is the price we have to pay to get out of this trap, and eventually bring a stability to that region which if the Iraqis and other Arab countries want to become liberal systems, they can do it. They're not going to do it the way we're headed there now. . . .

HH: So you don't think it can get worse?

WO: Yeah, it can get worse. It's gotten worse every year.

HH: But how much worse could it get if we weren't there?

HH: So how many people do you think will die [if we withdraw]? . . . And as a result, that doesn't matter, though?

WO: And so you can sit there and fantasize any scale you want to, to scare people into continuing to do stupid things.


HH: And do we help them get closer to the order in which freedom can flourish?

WO: We have made it much worse.

HH: Much worse than Saddam?

WO: Oh, there's many more people been killed each year we've been there than were being killed during Saddam's period.

On the Manipulative Homages to the Purple Finger:

HH: And so the purple finger elections of 2005, of no counterargument to you?

HH: I didn't make that -- I was saying what did that mean, the people, the millions that turned out?

WO: It meant that we held an election out there, and people came and voted.

HH: And what did that, do they aspire to order, General?

WO: Sure, they want order, but voting doesn't produce order.

On Hugh Hewitt and his warrior-comrades:

WO: And following -- let me ask you. Are you enthusiastic enough to put on a uniform and go?

WO: Okay, but we can recruit you.

WO: And I don't see all these war hawks that want to -- none of them have been in a war, and they don't want to go.

On glorious War with Iran:

HH: All right. Next in your article, you wrote, "We must continue the war to prevent Iran's influence from growing in Iraq." That's one of the arguments you attribute to proponents of staying. And I do believe that's a very important issue. Do you believe that Iran is intent on acquiring nuclear weapons?

WO: Sure. They're going to get them.

HH: And should we do anything to stop that?

WO: Because we can't. We've already squandered what forces we have, and we're going to have more countries proliferate. If somebody told us not to proliferate, and that if we wanted to do it and we started, that they were going to change our regime, you damn well bet we'd get nuclear weapons. Well, that's the approach we've taken. We could not have increased Iranian incentives for getting nuclear weapons faster, or more effectively, than the policy we've used to keep to prevent them from getting them. . . .

HH: Do you believe they would use a nuke against Israel?

WO: Not unless Israel uses one against them. . . .

HH: So Israel should not take unilateral action, either?

WO: That's up to them, but I think it'll make it worse for them. Israel's policies thus far have made its situation much worse. If you read all of the Israel press, you'll find a lot of them there are firmly in my camp on this issue. And I've talked to many Israelis who are very sympathetic with the view I have on it. You're making it much, much worse for Israel.

WO: If I were an Israeli right now, given Olmert's policies and Bush's policies, I would fear for my life.

HH: You would have been with which party in Great Britain in the 30's? Let me ask it that way. Was Churchill --

HH: Yes, but did Stanley Baldwin and Neville Chamberlain ignore the statements of Hitler, and put it down as just rhetoric?

WO: This is -- Ahmadinejad is not -- he does not have German industry. He does not preside over a country which was becoming the major industrial power in Europe.

WO: He's in a backward country with a group of people who are becoming poorer and poorer as a result of his policies.

WO: And if you can't see the difference between that, then I'm very disappointed in your judgment.

On the hysteria and simplicity of neoconservatism:

HH: So what [Adhmedinijad and Iranian 12th Imam Millenialists] think and what their intentions are don't matter, General?

WO: You don't know what their intentions are. You're just listening to their rhetoric. . . .

HH: Well, should we ever pay attention to what people say?

WO: Yes, we should pay attention sometimes, but I can -- I'd pay attention to that, and when I do, I see that it's very much really the way Kim Jung Il uses his rhetoric. He knows how to cause us to jump up in the air and get all excited, and cause people of your frame of mind, and particularly the neocons' frame of mind, to start doing things that are not in the U.S. interests. And then as you hit the ground, we'd pay him off and bribe him.

The whole interview is like that and highly worth reading. We need much, much more of these candid and unafraid discussions. Though it shouldn't be necessary, if it takes the very substantial group of Generals and other military opponents of neoconservatism to be among the leading spokespeople opposing the President's ongoing militarism, so be it. The scare tactics and smearing techniques of the Hugh Hewitts and Bill Kristols of the world -- used to justify some of the most destuctive policies our country has ever undertaken -- are flimsy, weak and easily swatted away, and it is long past time to cease according the advocates of those views and the arguments themselves any respect.

These are radical and highly destructive courses of action they are pursuing that have damaged our country to a still unquantifiable degree. And they are far from done. There is no reason to oppose their mindset apologetically or fearfully. Clear, candid, unapologetic explanations like the ones offered by Gen. Odom are what is necessary.

UPDATE: This is what explains their "V for Victory" insignia. The Churchill/Chamberlain/World War II event is the only historical analogy they know -- and they "know" it quite poorly, for the reasons Gen. Odom pointed out. But they are obsessed with striking the pose of the Churchillian warrior -- the Scintillating Rush of Resolute Will, the Finding of True Purpose, and Glorious Military Triumph. They addictively mimic all aspects of it, except for the actual fighting and sacrifice part. 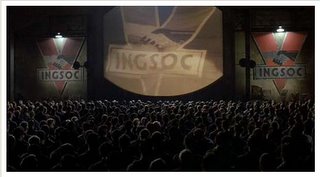 Manipulative symbols and trite smears are all they have left.