How Cheney bombed in Afghanistan

The vice president slinks home from a disastrous trip where a failed assassination attempt was only the loudest proof that his war policies have emboldened al-Qaida and the Taliban. 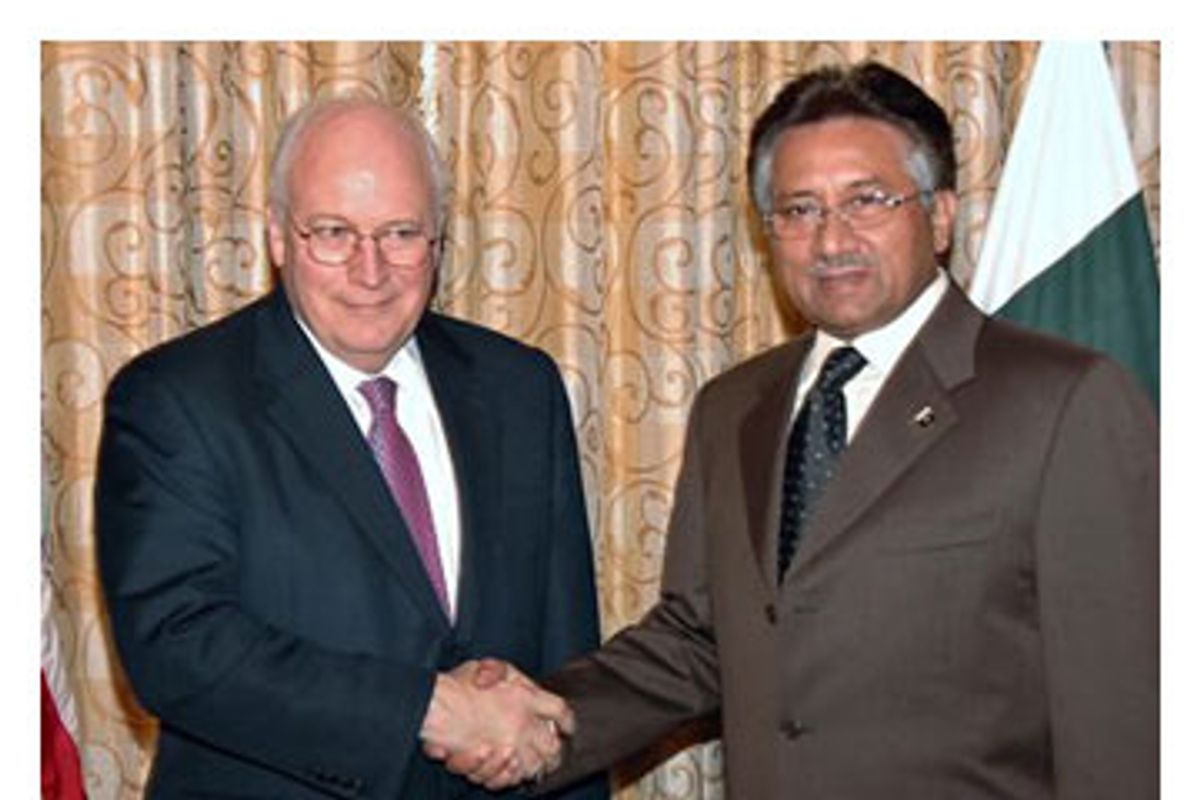 Was the suicide bomber attack at Bagram Air Base in Afghanistan on Tuesday an attempted assassination of Vice President Dick Cheney or a horse's head in his bed?

The day before, Cheney had delivered a stinging message to Pakistani President Pervez Musharraf -- U.S. aid would be withheld unless Pakistan supported strikes against Taliban and al-Qaida forces that have nestled in Pakistan as a sanctuary, where they have gathered strength in anticipation of a spring offensive against the Afghan government. Musharraf's official response via a spokesman was immediate: "Pakistan does not accept dictation from any side or any source." Then came the bombing. Was it another form of reply? The Taliban claimed credit. But was only the Taliban involved?

The Pakistani Inter-Services Intelligence (ISI) agency was present at the creation of the Taliban, which it has deployed to give it strategic depth in its long war with India. The ISI has lent clandestine support to other terrorist groups against India. And ISI agents have also been deeply involved with al-Qaida. ISI operatives continue to aid and advise the Taliban and al-Qaida resurgence in Afghanistan.

Musharraf, a former army chief of staff who took power in a military coup in 1999, has been a rival of ISI influence and has never succeeded in securing control over it. The circumstances surrounding the two assassination attempts against him, using suicide bombers within 11 days in 2003, remain unsolved, though experts believe they are linked to his tough policy toward the Taliban and al-Qaida. Soon after Sept. 11, 2001, encouraged and aided by the U.S., Musharraf waged an unsuccessful military campaign against the Taliban and al-Qaida in the remote tribal province of Waziristan, bordering Afghanistan. Last spring, Musharraf withdrew Pakistani troops from south Waziristan, ceding it to the Taliban and its allies. Last September, Musharraf surrendered north Waziristan, agreeing to a formal truce with Taliban representatives and even returning seized weapons. Taliban and al-Qaida flags fly side by side throughout the region. From 2001 to the present, the Pakistanis reportedly have not arrested a single Taliban leader. The Taliban operate their headquarters unimpeded out of Quetta, the capital of Pakistan's Baluchistan province, the gateway to Kandahar in southern Afghanistan.

Musharraf's retreat was an acceptance of political reality and an act of self-protection. He believed that U.S. backing for his appeasement policy was critical to maintenance of his power, which he must assume is the larger mutual goal. Cheney's recent ultimatum, however, puts him in a precarious spot, especially with parliamentary elections scheduled this year and the popularity of Bush at its nadir among Pakistanis. The questions pressing upon Musharraf are the degree of control he has over his own government and country and his survival at the sufferance of the ISI and its clients.

The questions raised by the would-be assassination of Cheney highlight the counterproductive incoherence and impotence of administration policy. Before the bombing, Cheney was gleefully using his foreign travels as a platform for partisan strafing. After he declared that House Speaker Nancy Pelosi's criticism of the administration's Iraq policy aided and abetted al-Qaida, she called President Bush to register her objection to having her patriotism smeared. Cheney's remark, she said, was "beneath the dignity of his office." On Feb. 26, a reporter from ABC News asked Cheney if he stood by his statement. Cheney was only too happy to repeat it. "If we adopt the Pelosi policy, then we will validate the strategy of al-Qaida. I said it and I meant it," he said. The pool reporter noted that Cheney "looks pretty chipper, near the end of a weeklong odyssey." But after the bombing, Cheney fell uncharacteristically silent.

Since Sept. 11, Bush and Cheney have proclaimed a Manichaean struggle in which, as Bush said, "you're either with us or with the terrorists." This formula has been applied at home and abroad. It is a distillation of Bush's foreign policy and his domestic politics. In his "war on terror," he is leading the forces of "freedom" against "evil" because it is "part of God's plan," and that "God is not neutral." Then Palestinian Foreign Minister Nabil Shaath told the BBC in 2005 that Bush had confided in him and Mahmoud Abbas, former prime minister and now Palestinian president: "I'm driven with a mission from God. God would tell me, 'George, go and fight those terrorists in Afghanistan.' And I did, and then God would tell me, 'George go and end the tyranny in Iraq,' and I did."

At Cheney's direction, intelligence was skewed to suggest links between Saddam Hussein and al-Qaida. Over the past year, as that intelligence was exposed as false and, worse, as disinformation, Cheney has defended the conflation of threats through a contrivance of illogic, also routinely repeated by Bush: "We were not in Iraq on September 11th, 2001, and the terrorists hit us anyway."

Cheney's implication that the U.S. presence in Iraq cannot possibly be an inspiration for terrorism is simply not shared at the highest levels of the senior military, including commanders on the ground in Iraq. I have learned that they are privately reading, circulating, and in agreement with a new article written by terrorism experts Peter Bergen and Paul Cruickshank, senior fellows at the New York University Center on Law and Security. (Bergen is also a fellow at the New America Foundation. For purposes of full disclosure, I am also a senior fellow at the NYU Center.) Their article, "The Iraq Effect: War Has Increased Terrorism Sevenfold Worldwide," published in Mother Jones, provides empirical evidence for careful conclusions:

"Our study yields one resounding finding: The rate of terrorist attacks around the world by jihadist groups and the rate of fatalities in those attacks increased dramatically after the invasion of Iraq. Globally there was a 607 percent rise in the average yearly incidence of attacks (28.3 attacks per year before and 199.8 after) and a 237 percent rise in the average fatality rate (from 501 to 1,689 deaths per year). A large part of this rise occurred in Iraq, which accounts for fully half of the global total of jihadist terrorist attacks in the post-Iraq War period. But even excluding Iraq, the average yearly number of jihadist terrorist attacks and resulting fatalities still rose sharply around the world by 265 percent and 58 percent respectively."

Draining military and economic resources from Afghanistan in the run-up to invading Iraq contributed to Afghanistan's current crisis. While money and materiel were siphoned to Iraq, Afghanistan was starved. "Aid per capita to Afghans in the first two years after the fall of the Taliban was around a tenth of that given to Bosnians following the end of the Balkan civil war in the mid-1990s," Bergen noted in testimony on Feb. 15 before the House Foreign Affairs Committee. Former U.S. ambassador to Afghanistan James Dobbins has said, "Afghanistan was the least resourced of any major American-led nation building operation since the end of World War II." But the Iraq policy has had other ricochet effects, according to Bergen and Cruickshank:

"Since the invasion of Iraq, Afghanistan has suffered 219 jihadist terrorist attacks that can be attributed to a particular group, resulting in the deaths of 802 civilians. The fact that the Taliban only conducted its first terrorist attacks in September 2003, a few months after the invasion of Iraq, is significant. International forces had already been stationed in the country for two years before the Taliban began to specifically target the U.S.-backed Karzai government and civilians sympathetic to it. This points to a link between events in Iraq and the initiation of the Taliban's terrorist campaign in Afghanistan. True, local dynamics form part of the explanation for the resurgence of the Taliban in Afghanistan. But the use of terrorism, particularly suicide attacks, by the Taliban is an innovation drawn from the Iraqi theater."

The bombing at Bagram silenced Cheney's bombast, at least for the moment. His mission to Musharraf and the subsequent assassination attempt, if it was that, also exploded his simplistic ideological sloganeering. Rather than waging a grand battle of good vs. evil, he and Bush are dependent upon an ambiguous Pakistani leader with a tenuous grasp on power, whose untrustworthy intelligence service is crucial in directing the Taliban.

Rather than approaching a climactic struggle against free-floating sects of "Islamofascism," the administration has been a party since Sept. 11 to concrete regional conflicts in which not only were economic, social and diplomatic instruments ignored but international military help was also rejected. Belatedly, in Afghanistan, circumstances of the administration's own making have forced it to concede the necessity of getting assistance from allies. Yet the movement of 1,400 British troops there is a direct reflection of the disintegration of the "coalition of the willing" in Iraq. Those very troops are being redeployed from southern Iraq, the British sector now being ceded to control of Muqtada al-Sadr's Mahdi Army, which Bush's "surge" is supposedly intended to suppress.

Rather than returning home a conquering hero, Cheney slinks back from his trip having revealed how the failure of administration policy has validated the strategy of the Taliban and al-Qaida. That harsh conclusion, moreover, is not mere punditry. It is the considered view of senior military commanders.